A new telescope capable of peering 13.7billion light years into the past hopes to unveil secrets of the universe, while also searching for oxygen on alien worlds outside of the Solar System.

A new telescope capable of peering 13.7 billion light years into the past hopes to unveil secrets of the universe, while also searching for oxygen on alien worlds outside of the Solar System.

Developed by Nasa and aerospace company Northrop Grumman, the $A14.5 billion James Webb Space Telescope has entered the final stages of testing before it's launched into space.

The project has been 24 years in the making and has involved experts from 24 countries across three space agencies – Nasa, the Canadian Space Agency and the European Space Agency. NASA hopes to launch the "world's largest and most powerful space science telescope" by March 2021, with the instrument set to orbit some 1.6 million kilometres from Earth.

"[The telescope] will study every phase in the history of our Universe, ranging from the first luminous glows after the Big Bang, to the formation of solar systems capable of supporting life on planets like Earth, to the evolution of our own Solar System," explained NASA.

The four-storey high satellite is equipped with a mirror made of beryllium – a rare metal stronger than steel but lighter than aluminium – which will be used to analyse and digitise the range of infrared wavelengths given off from explosions of supernovas some 13.7 billion light years ago.

Looking back in time is made possible because of the time light takes to travel back to the telescope.

"When you look at the stars at night, you are seeing light that may have taken 20 or 30 or even a few hundred years to reach your eyes," NASA said as an example. "When [the telescope] takes a picture of a galaxy 100 million light years away, we are seeing the galaxy as it looked 100 million years ago."

NASA said the telescope will also focus on a system of seven planets known as TRAPPIST-1 - Earth-size worlds orbiting an ultra-cool star 39 light-years from our planet.

Using a variety of instruments and observing modes, the telescope will be able to distinguish between an atmosphere dominated by water vapor, or one composed mainly of nitrogen (like Earth) or carbon dioxide (like Mars and Venus).

"It would be very exciting to make the first detection of an atmosphere on an Earth-sized planet," explained TRAPPIST-1 principle investigator David Lafrenière. 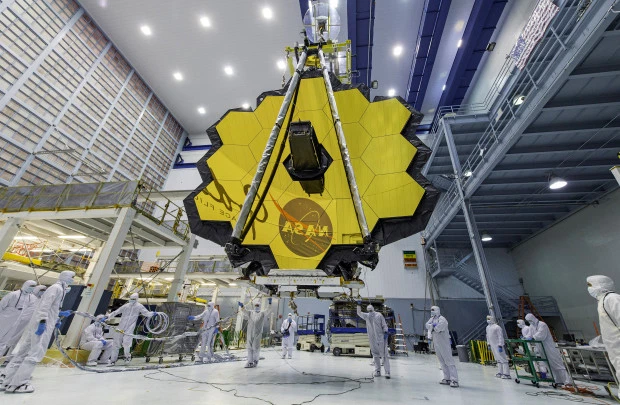 In addition to habitable planets, the telescope will also study the circulation patterns, chemistry and weather of Uranus and Neptune.

"The key thing that Webb can do that is very, very difficult to accomplish from any other facility is map their atmospheric temperature and chemical structure," explained NASA.

"We think that the weather and climate of the ice giants are going to have a fundamentally different character compared to the gas giants (Jupiter and Saturn).

"That's partly because they're so far away from the Sun, they're smaller in size and rotate slower on their axes, but also because the blend of gases and the amount of atmospheric mixing is very different compared with Jupiter and Saturn."