Astounding images taken by pollution monitoring satellites show a significant decrease in toxic gases above China over the last several weeks, likely in part due to an economic slowdown caused by the new coronavirus outbreak, NASA said.

Images released by the space agency show yellowish nitrogen dioxide cloaking a wide area of land north and east of Wuhan, where the virus originated, during the first few weeks of January. By mid-February, the cloud was almost entirely gone.

These effects would correlate with Chinese authorities ordering a city-wide quarantine of Wuhan at the end of January and the halting of transportation into and out of that city and several others to prevent the spread of coronavirus. Nitrogen dioxide, which is harmful to human health and the environment, is emitted by motor vehicles, power plants and industrial facilities. 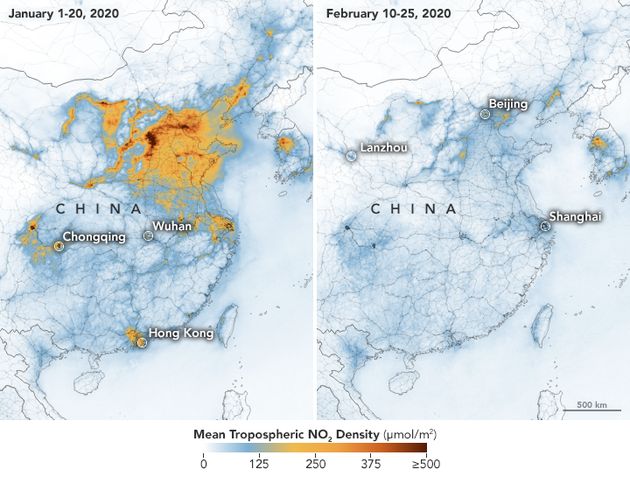 China, which has the second-largest economy in the world, also saw its manufacturing sector suffer more than expected in February, amid efforts to contain the virus, according to an official survey released on Saturday.

“This is the first time I have seen such a dramatic drop-off over such a wide area for a specific event,” Fei Liu, an air quality researcher at NASA’s Goddard Space Flight Center in Maryland, said in a statement that accompanied the satellite photos.

NASA acknowledged that the pollution decrease also coincided with Chinese Lunar New Year celebrations, which can prompt businesses and factories to shut down from the end of January to early February. Air pollution levels typically decline during this time of year because of the festivities and then increase again once the celebration is over, the space agency said.

Though Lunar New Year celebrations may have improved the air quality, researchers said the region’s response to the virus appears to be the biggest factor, especially since levels have not rebounded after the holiday as they usually do.

“This year, the reduction rate is more significant than in past years and it has lasted longer,” Liu said. “I am not surprised because many cities nationwide have taken measures to minimise spread of the virus.”