Democrat House speaker Nancy Pelosi ripped up her printed copy of US president Donald Trump’s speech at the conclusion of his State of the Union address on Tuesday.The dramatic moment showed the country’s highest-ranking Democrat tear …

Democrat House speaker Nancy Pelosi ripped up her printed copy of US president Donald Trump’s speech at the conclusion of his State of the Union address on Tuesday.

The dramatic moment showed the country’s highest-ranking Democrat tear and then toss the pages behind Trump’s back as he embraced a standing ovation at the conclusion of his controversial address.

The bitter feud between the pair followed Trump earlier snubbing her outstretched hand at the start of his speech and the impeachment proceedings brought by Pelosi’s party. 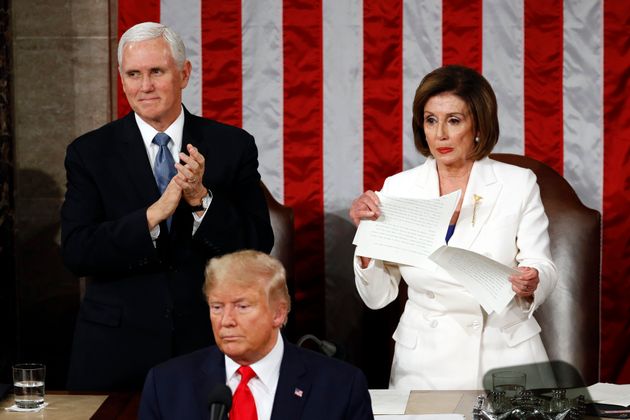 Trump avoided the subject of his impeachment in his pugnacious 80-minute speech, but the scars from the battle were evident with fellow Republicans giving him standing ovations while rival Democrats for the most part remained seated.

Seeing Pelosi for the first time since she stormed out of a White House meeting four months ago, he declined to shake her outstretched hand as he gave her a copy of his remarks before starting his speech.

When his speech ended, Pelosi stood and tore up her copy of the remarks he had handed her, later telling reporters it was “the courteous thing to do, considering the alternative”.

Pelosi, who dropped her opposition to impeachment and allowed Democratic lawmakers to seek the charges against him, sat stoically and grim-faced behind Trump and paged through a paper copy of his speech.

In the speech, Trump declared America is “stronger than ever before” on the eve of his probable impeachment acquittal.

Trump, the first president to run for re-election after being impeached, received a partisan welcome to the House of Representatives, with some Republicans chanting “four more years” while Democrats stood silently.

“In just three short years, we have shattered the mentality of American decline and we have rejected the downsizing of America’s destiny.

“We are moving forward at a pace that was unimaginable just a short time ago, and we are never going back.”

Setting a measure for success and then contending he had surpassed it, Trump has gone from an inaugural address that decried “American carnage” to extolling the “Great American comeback”, claiming credit for the nation’s economic success as a chief rationale for a second term.

Republican members of Congress applauded nearly every sentence of Trump’s speech, often leaping to their feet to cheer him.

Over his shoulder, visible in nearly every camera shot, was Pelosi, a frequent thorn in Trump’s side who authorised the impeachment proceedings that charged the president with abusing the power of his office to push Ukraine to investigate political foe Joe Biden.

Pelosi created a viral image with her seemingly sarcastic applause of the president a year ago.