Myanmar's ruling junta has declared martial law in a wide area of the country's largest city, as security forces killed dozens of protesters over the weekend in an increasingly lethal crackdown on resistance to last month's military coup.

The developments were the latest setback to hopes of resolving the crisis that started with the military's February 1 seizure of power that ousted the elected government of Aung San Suu Kyi. A grassroots movement has sprung up across the country to challenge the takeover with almost daily protests that the army has tried to crush with increasingly deadly violence

State broadcaster MRTV said Monday that the Yangon townships of North Dagon, South Dagon, Dagon Seikkan and North Okkalapa have been put under martial law. That was in addition to two others — Hlaing Thar Yar and neighbouring Shwepyitha — announced late Sunday. More violence was reported around the country on Monday, with at least eight protesters in four cities or towns killed, according to the independent broadcaster and news service Democratic Voice of Burma.

At least 38 people were killed Sunday and dozens were injured in one of the deadliest days of the crackdown on anti-coup protesters, according to the Assistance Association for Political Prisoners, an independent group tracking the toll of the violence. Death tolls compiled by other credible sources were almost twice that.

U.N. Special Envoy on Myanmar Christine Schraner Burgener condemned the "continuing bloodshed," which has frustrated calls from the Security Council and other parties for restraint and dialogue.

"The ongoing brutality, including against medical personnel and destruction of public infrastructure, severely undermines any prospects for peace and stability," she said. 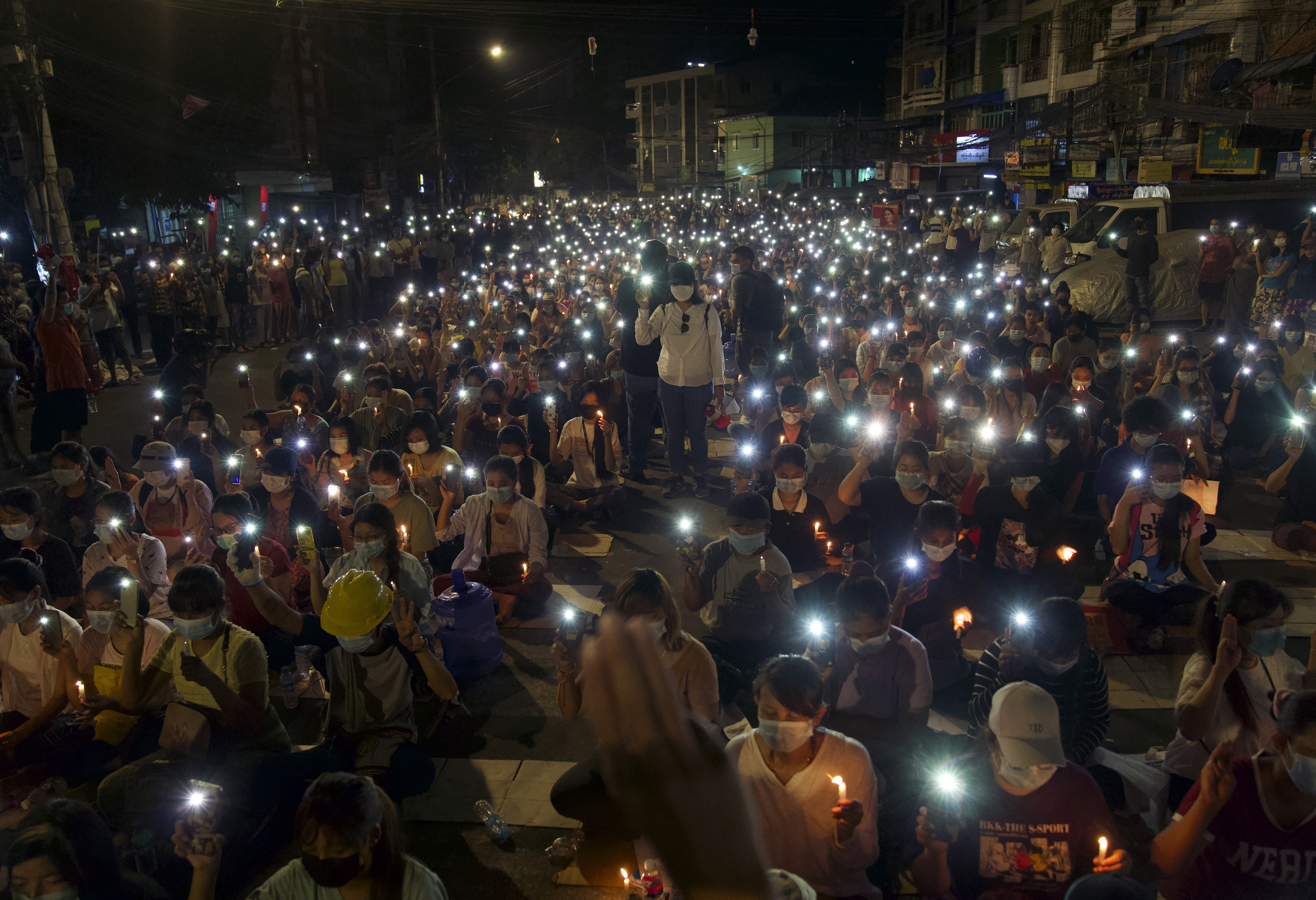 Complicating efforts to organise new protests, as well as media coverage of the crisis, cellphone internet service has been cut, although access is still available through fixed broadband connections.

Mobile data service had been used to stream live video coverage of protests, often showing security forces attacking demonstrators. It previously had been turned off only from 1am to 9am for several weeks, with no official explanation.

The blockage of internet service forced postponement of a court hearing in the capital, Natpyitaw, for Myanmar's detained leader Suu Kyi, who was supposed to take part via a video conference, said her lawyer Khin Maung Zaw. Suu Kyi and President Win Myint were detained during the coup, and have been charged with several criminal offences that their supporters believe are politically motivated to keep them locked up.

Since the takeover, Myanmar has been under a nationwide state of emergency, with military leaders in charge of all government. But Sunday's announcement was the first use of martial law since the coup and suggested more direct handling of security by the military instead of police. 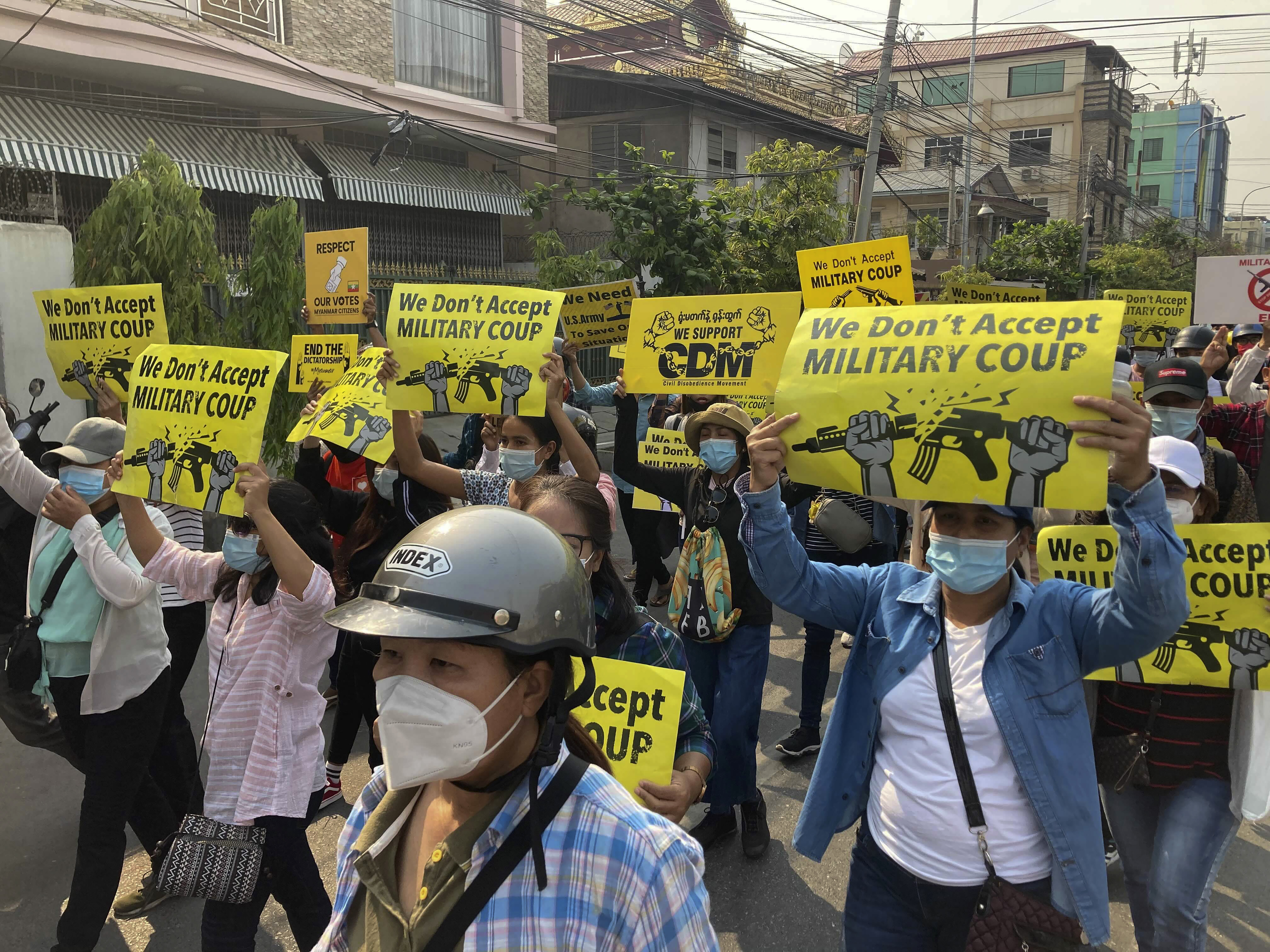 Sunday's announcement said the junta, formally called the State Administrative Council, acted to enhance security and restore law and order, and that the Yangon regional commander has been entrusted with administrative, judicial and military powers in the area under his command. The orders cover six of Yangon's 33 townships, all of which suffered major violence in recent days.

Thirty-four of Sunday's deaths were in Yangon. At least 22 occurred in Hlaing Thar Yar township, an industrial area with many factories that supply the garment industry, a major export earner for Myanmar. Several of the factories, many of which are Chinese-owned, were set aflame Sunday by unknown perpetrators.

The torching earned protesters a rebuke from the Chinese Embassy, which in turn received an outpouring of scorn on social media for expressing concern about factories but not mentioning the dozens of people killed by Myanmar's security forces.

Four other deaths were reported in the cities of Bago, Mandalay, and Hpakant, according to the AAPP and local media.

Protesters in the past week in response to increased police violence have begun taking a more aggressive approach to self-defence, burning tires at barricades and pushing back when they can against attacks. A statement issued Sunday by the Committee Representing Pyihtaungsu Hluttaw, the elected members of Parliament who were not allowed to take their seats, announced that the general public has the legal right to self-defence against the junta's security forces.

The group, which operates underground inside the country and with representatives abroad, has established itself as a shadow government that claims to be the sole legitimate representative body of Myanmar's citizens. It has been declared treasonous by the junta.

A small respite from the latest violence came before dawn Monday, when several dozen anti-coup protesters in southern Myanmar held candlelight vigils with calls for the end of the military government and a return to democracy.

In Kyae Nupyin village, in Launglone township, villagers read Buddhist texts and prayed for the safety and security of all those risking their lives in the face of the increasingly lethal response of the security forces. The area around the small city of Dawei has become a hot spot for resistance to the military takeover. On nearby country roads, a long convoy of motorcyclists carried the protest message through villages.

In Dawei itself, demonstrators built barricades out of rocks to hinder police on the main roads. There were marches, both in the morning and the afternoon, to try to keep up the momentum of weeks of resistance to the takeover.