Thirty years of fostering has had its share of highs and lows but for me the worst moment was having to tell my foster boy Samet that effectively his life was over. His crime? Turning 18. Every time I read the news at the moment I see story after … 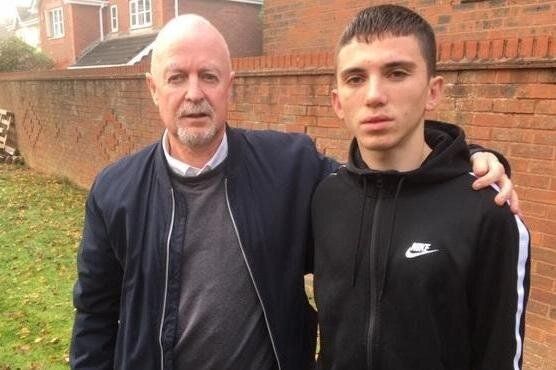 Thirty years of fostering has had its share of highs and lows but for me the worst moment was having to tell my foster boy Samet that effectively his life was over. His crime? Turning 18.

Every time I read the news at the moment I see story after story about immigration and “points” and “salaries”. That’s why I want to tell my story. Because Samet isn’t a number of points or a salary, he’s a real person whose life is being taken away.

Samet’s life has already been so unfairly difficult. At 11, his drunken father forced him to beg on the streets of Tirana in Albania to support his family. At 15 he was taken to Brussels and what happened to him there has traumatised Samet so much that he still can’t talk about it.

As soon as he turned 18, we had the shock of the Home Office trying to deport him.

Samet was trafficked into England and it’s quickly become his home. It’s the first place where he’s finally felt safe, protected and loved. I’ve loved fostering Samet and we’ve worked hard together to help him build a life here. He’s learnt English incredibly fast and is training at college to become a carpenter.

A few months ago Samet turned 18. Samet’s classmates from college have all been celebrating their milestone birthdays – giddy at the freedom that lies ahead for them as adults. But for Samet, as soon as he turned 18 we had the shock of the Home Office trying to deport him. It’s disgusting that the same country that welcomed Samet three years ago now can’t get rid of him quickly enough, just because he’s had his birthday. After all that Samet has been though, how can the system be so cruel?

READ:  What Is Reconciliation Week And How Is It Being Celebrated During COVID?

Many young Albanians are trafficked to the UK but very few get asylum. Most go into hiding and are left vulnerable to traffickers and gangs with their lives in ruins. It says it all that people would rather live as ghosts rather than be returned to a country deemed “safe” by the Home Office.

So I started a petition on Change.org for “a future for Samet”. I can’t believe that already over 260,000 people are supporting our campaign. I sent out a cry for help that has opened the public’s eyes to Samet and the many other trafficked young people now in hiding. Knowing I’ve got hundreds of thousands of people supporting me probably makes me the foster carer with the world’s biggest support network. It feels like these people have given us a hug and given me a voice that I must use to change this madness. I am a foster carer and helping broken children is what I do. To then throw them out like rubbish is not something that I will do.

As a nation we take in these children, we care for them, we educate them, we train them and we show them compassion. My elder Albanian boy Ali had also to fight to stay at 18. Four years ago he came here like Samet on the back of a lorry. Today he is a head chef at 20 and paying his taxes, contributing greatly to our society and repaying our investment in him.

There are many foster carers fighting for children like Samet but due to my petition I am the one who now has the voice and therefore the responsibility to speak up. I know that I have to use that voice not just to save Samet, but to tell a different story to the one by politicians who are demonising immigration by turning people into “points” and “salaries”.

READ:  Why The US Needs To Do Reparations Now

It should never have been the case that I needed to start a petition and tell my story publicly to try to persuade the Home Office to let Samet stay. And it should never have been the case that Samet, his classmates and myself needed to travel from Bristol to London to visit the Home Office and hand deliver our petition. These are young people who should be carefree and at college, not scared that their friend is about to have his life taken away.

Now we’re waiting for the result of our latest appeal to the Home Office and I hope they listen to the huge public support for Samet. Remember when you read stories in the news about immigration facts and stats that it’s real people like Samet, people who have suffered traumatic childhoods and been victims of trafficking, that we’re talking about. Help me save Samet by supporting our campaign at change.org/afuture4samet

John Stokes was one of the UK’s first single male foster parents.