The large Black Lives Matter rally marched through the Sydney CBD in solidarity with the US’ African American population and to highlight Indigenous Australians’ injustices.

More than 3000 protesters marched through the Sydney CBD in solidarity with the United States' African American population and to highlight injustices faced by Indigenous Australians.

The large 'Black Lives Matter' rally first moved down Macquarie Street from Hyde Park to NSW state parliament before gathering in Martin Place while chanting messages of justice over the death of George Floyd in Minneapolis. 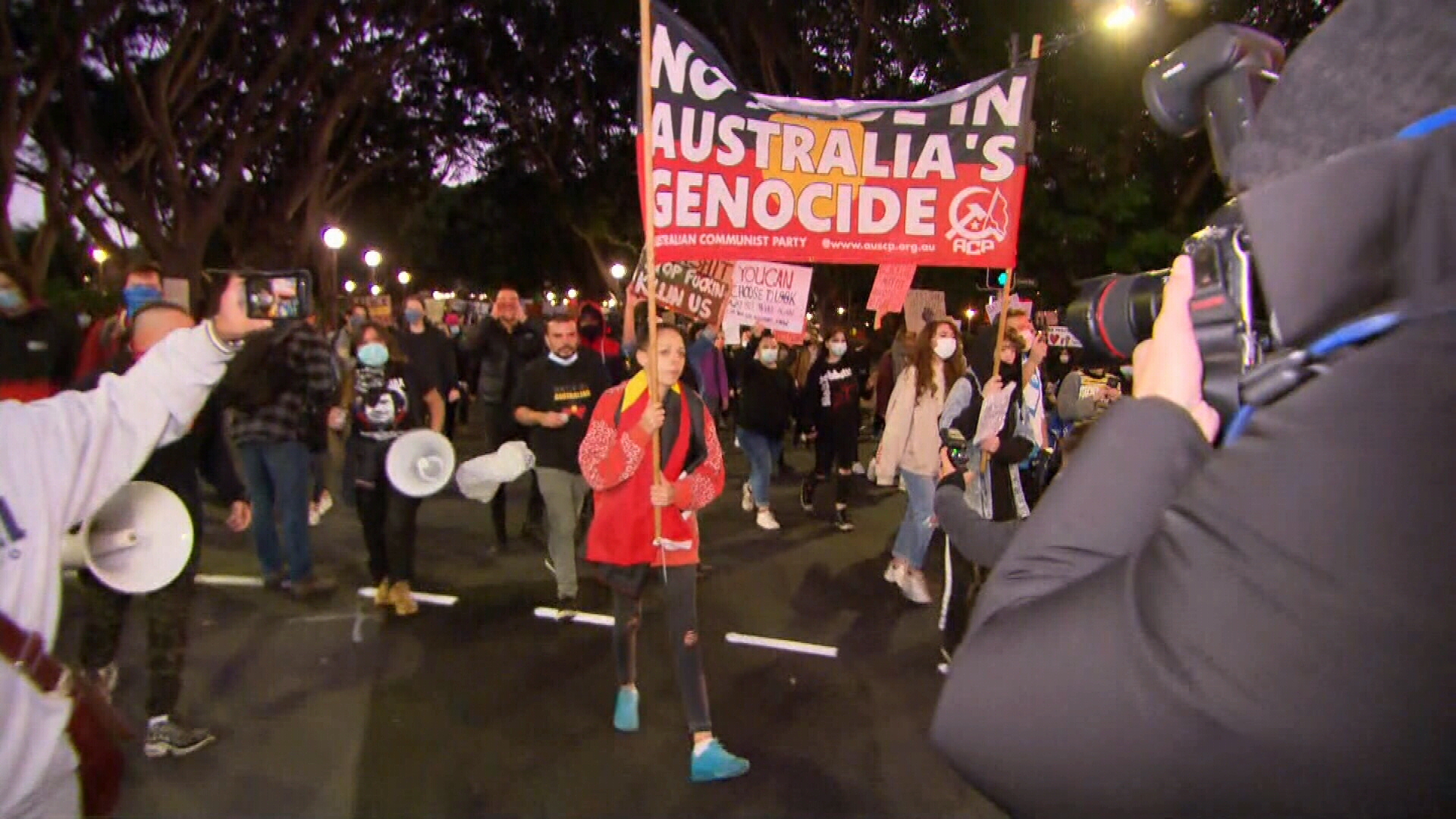 Meanwhile, police escorted the crowd, which was carrying banners that said: "Black Lives Matter," "Aboriginal Lives Matter," "White Silence is Violence" and "We See You, We Hear You, We Stand With You". 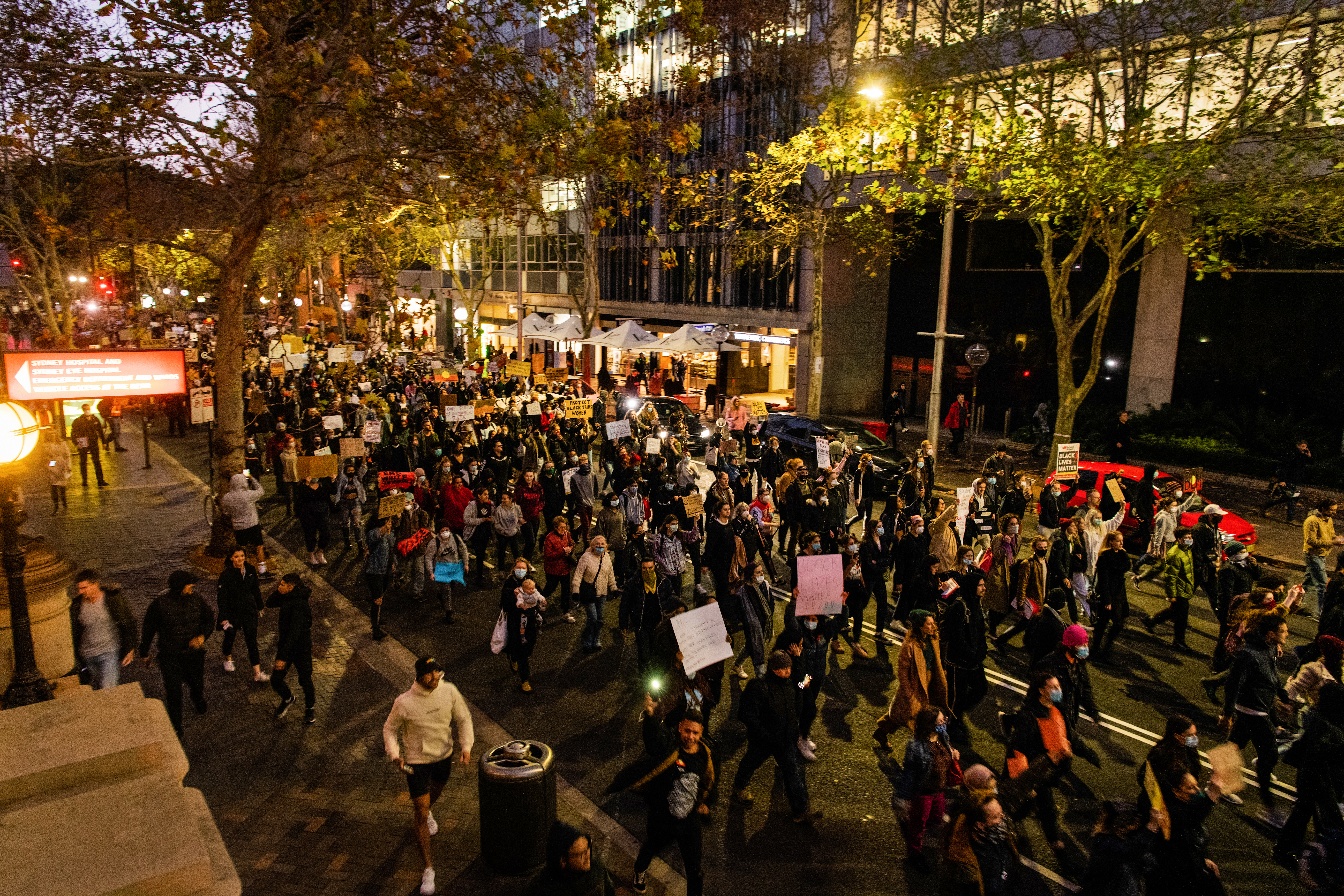 NSW police officers were deployed in force to direct the crowds, including mounted officers, and were forced to form a line to protect protesters from Sydney's light rail track on George Street while the transport service continued to run.

NSW Police said no arrests were made at the rally.

The protest proceeded despite some organisers cancelling it last night for fear of conflict with counter protesters. It is believed another rally is scheduled in Sydney for the weekend.

It comes after about 2000 demonstrators gathered in Perth to peacefully protest Mr Floyd's death, and rallies are planned for other Australian cities later this week.

Referring to the violence in US streets, Australian Prime Minister Scott Morrison said "there's no need to import things... happening in other countries here to Australia". 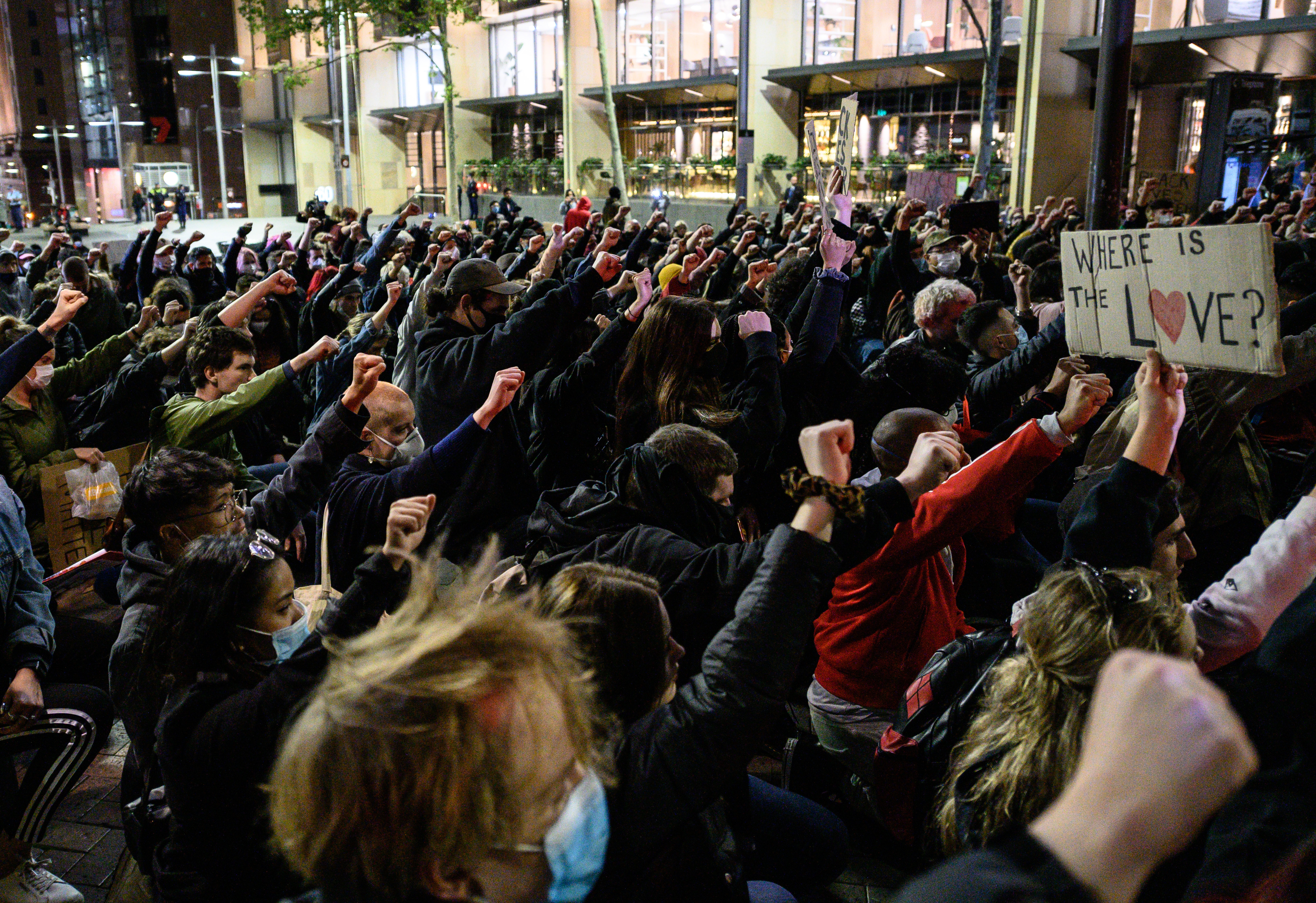 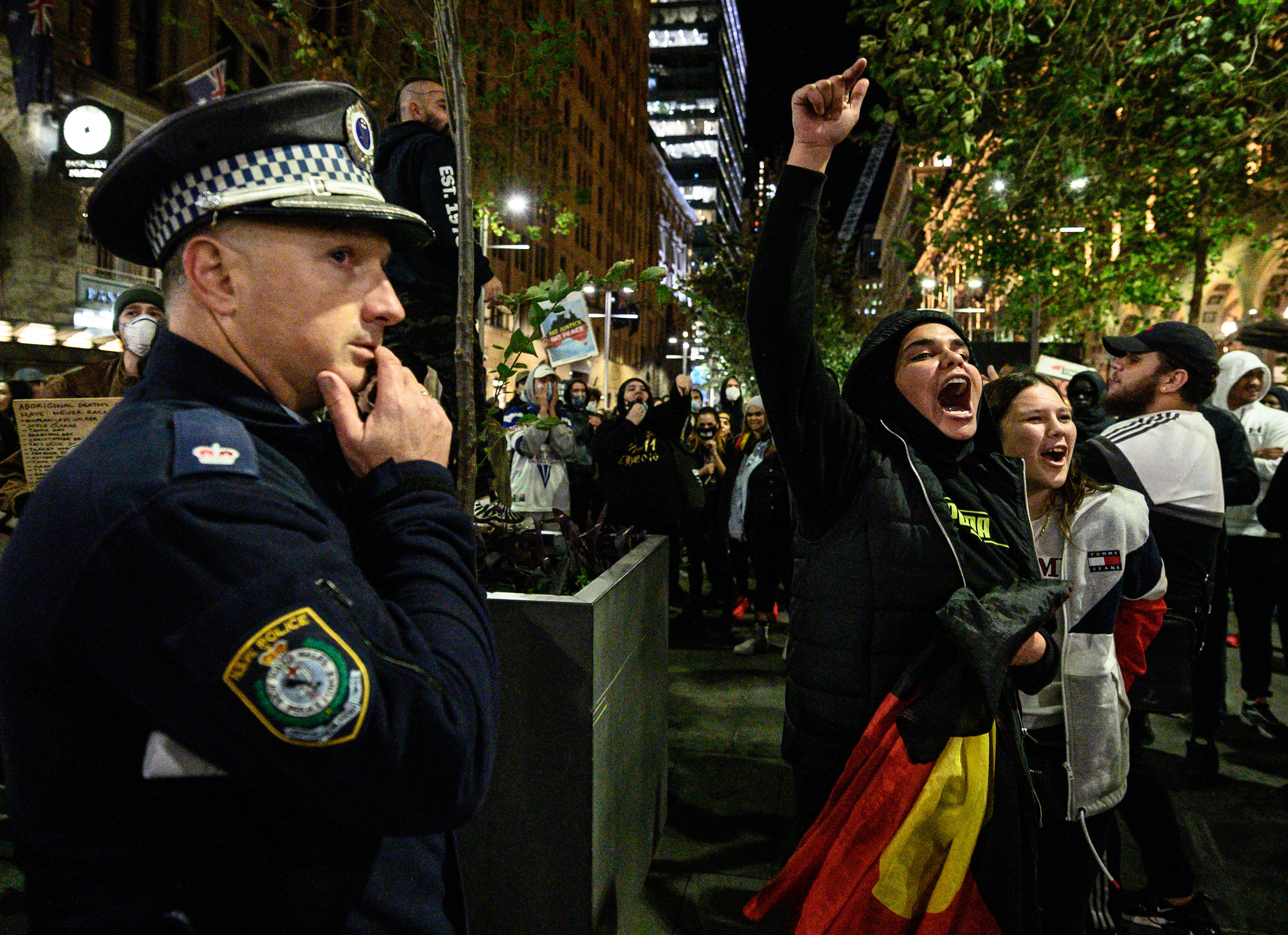 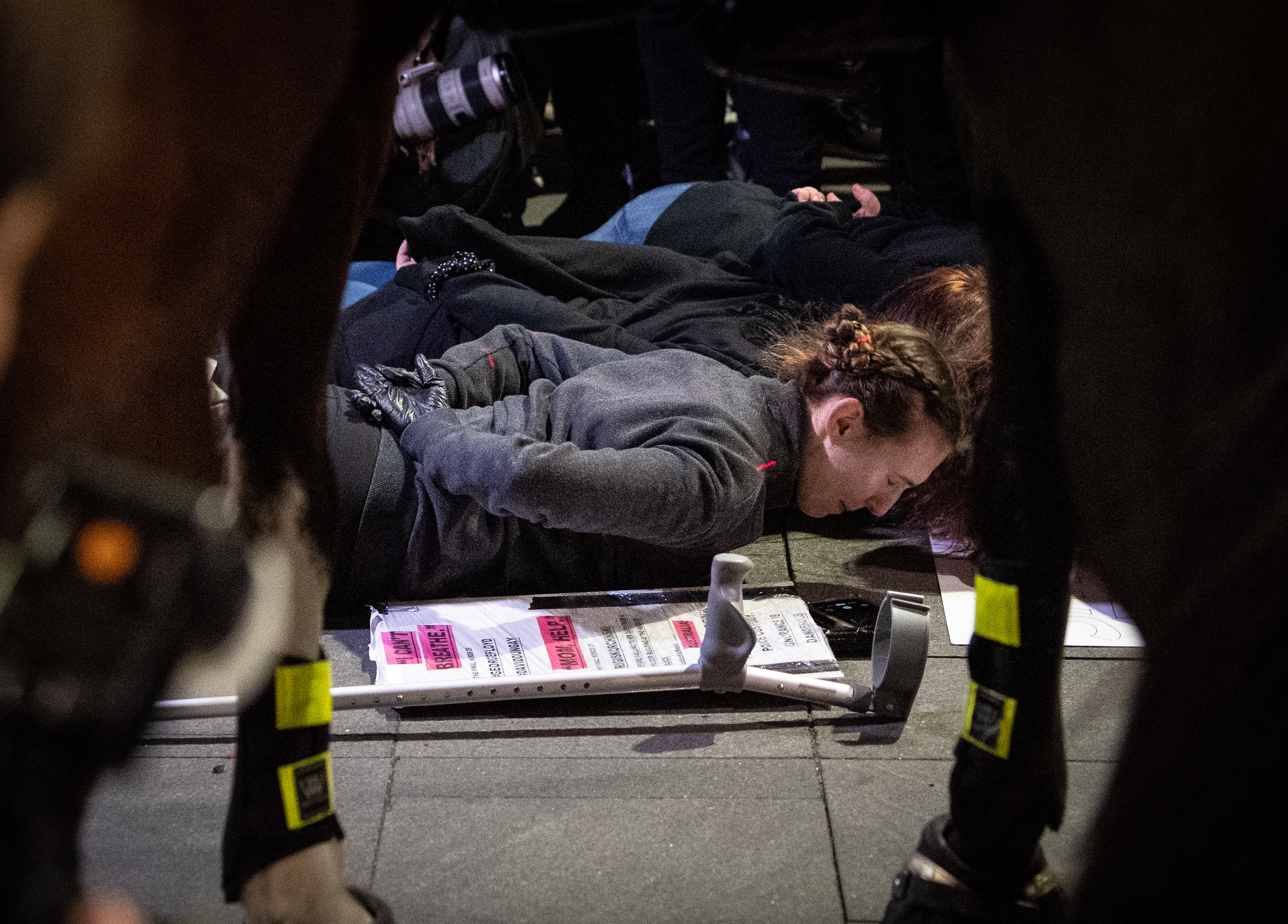 Gadigal man Tristan Field, who spoke at the start of the rally in Hyde Park, commended organisers for putting black voices at the forefront of the action.

"This mob has let the black people lead this movement for the better," Mr Field told AAP.

The 26-year-old said he wasn't surprised by an incident in Surry Hills on Monday that saw an Aboriginal teenager taken to hospital after having his legs kicked out from beneath him as he was arrested.

NSW Police are investigating the incident and on Tuesday placed the male officer who arrested the teenager on restricted duties.

"When I was a kid I got harassed by the police," Mr Field said.

Another protester, Tegan Smith, said the arrest in Surry Hills "really hits home for me".

"I have a younger brother the same age and everyday I wonder if he'll be the next one harassed by police," the 23-year-old Aboriginal woman said.

"It's scary and disgusting to be reminded police are doing this, even if it's not surprising."

Former Sydney Kings announcer and Australian basketball icon Rodney Overby, who grew up Philadelphia, said he regularly heard about incidents similar to the Surry Hills arrest in other parts of the world.

"That is news everyday... it's just because of this brother George being killed in the United States that people are arking up about it," the 54-year-old told AAP.

"We're coming together to say: 'stop killing us'."