The confirmed COVID-19 death toll in the United States has surpassed 100,000, according to a tally by Johns Hopkins University.The development falls in line with a Centers for Disease Control and Prevention projection in mid-May that the U.S. would rea…

The confirmed COVID-19 death toll in the United States has surpassed 100,000, according to a tally by Johns Hopkins University.

The development falls in line with a Centers for Disease Control and Prevention projection in mid-May that the U.S. would reach that milestone by June 1.

Three New York City counties with a combined total of more than 13,000 deaths round out the top of JHU’s list.

The US continues to have the greatest coronavirus death toll of any country in the world — around triple that of the United Kingdom, which ranks second in total deaths.

Though the US ranks ninth in deaths per capita, varying methodology between countries may obscure the real picture. Belgium, which has reported the greatest mortality rate, is including all deaths suspected of being linked to the COVID-19 in its tally, regardless of whether the deceased patient was tested for the virus.

Less than four months ago, President Donald Trump baselessly claimed that the coronavirus ― then concentrated in China’s Wuhan province ― would probably disappear “in April as the heat comes in.” Infectious disease experts warned him not to be so sure. Nearly 59,000 Americans died from COVID-19 during the month of April alone. 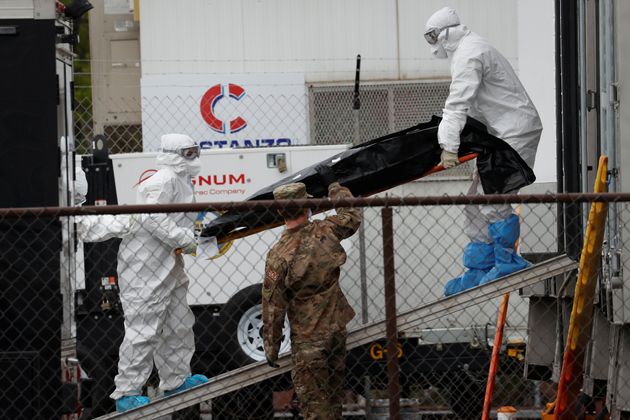 The president has repeatedly revised his predictions of the U.S. death toll upward as the pandemic sweeps the country, an act that’s allowed him to boast of the job he’s doing regardless of how bad things get. A New York Times analysis of all Trump’s public comments on the pandemic from March 9 to April 17 found that he congratulated himself on the U.S. response to coronavirus roughly 600 times. He rarely expresses any empathy for the victims but dedicates lots of time to attacking his critics.

The US would not be hitting 100,000 deaths this soon had it acted earlier, one analysis concluded. A recent Columbia University study found that if the country had put broad social distancing measures in place just a week earlier than it did in March, roughly 36,000 deaths could have been prevented.

The Trump administration is under more fire than ever for brushing off the advice of medical experts early on before the disease began spreading on US soil. Rick Bright, the recently ousted government vaccine official, testified before Congress this month that he “pushed for our government to obtain virus samples from China and to secure more funding ... to get started quickly on the development of critical medical countermeasures,” only to be fired from his job.

The 100,000 deaths milestone comes as Trump, public health officials and state leaders remain divided on how quickly to reopen the economy. While some governors have heeded advice from infectious disease experts and are taking a slower approach to reopening their states, others have resumed more normal business operations with encouragement from Trump.

Australia has recorded 7,144 cases of the disease and 103 fatalities following the death of a 30-year-old man with an underlying heart condition in Queensland, the country’s youngest COVID-19 victim.