First responders assisting after a Miami building collapsed have heard banging coming from under the rubble but no voices.

Dozens of people are missing after part of a 12-story residential building collapsed early on Thursday in the South Florida town of Surfside, USA.

Almost 100 people have been left unaccounted, according to Miami-Dade Police spokesperson Alvaro Zabaleta.

At least one person died because of the collapse, Miami-Dade County Mayor Daniella Levine Cava said. 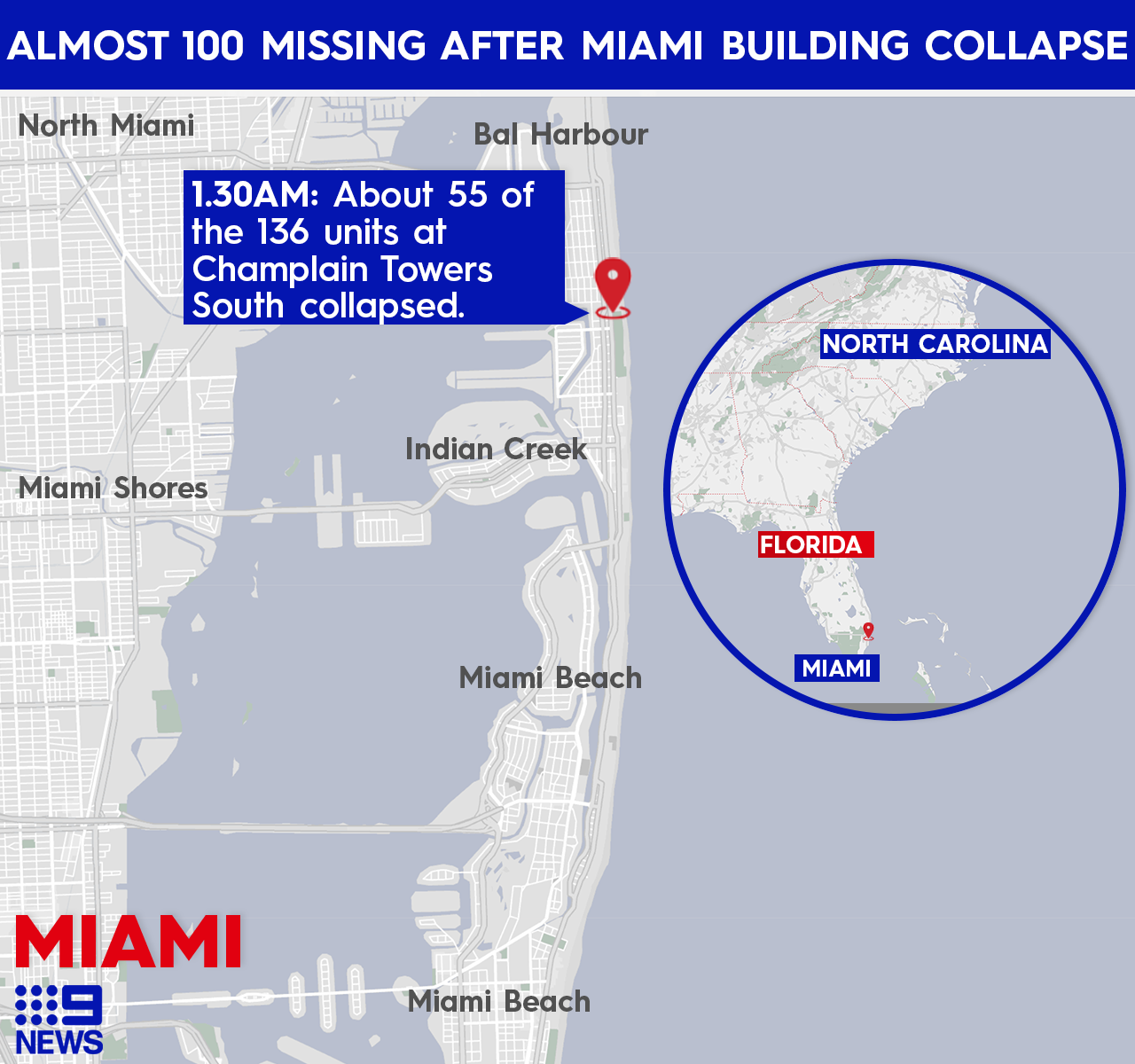 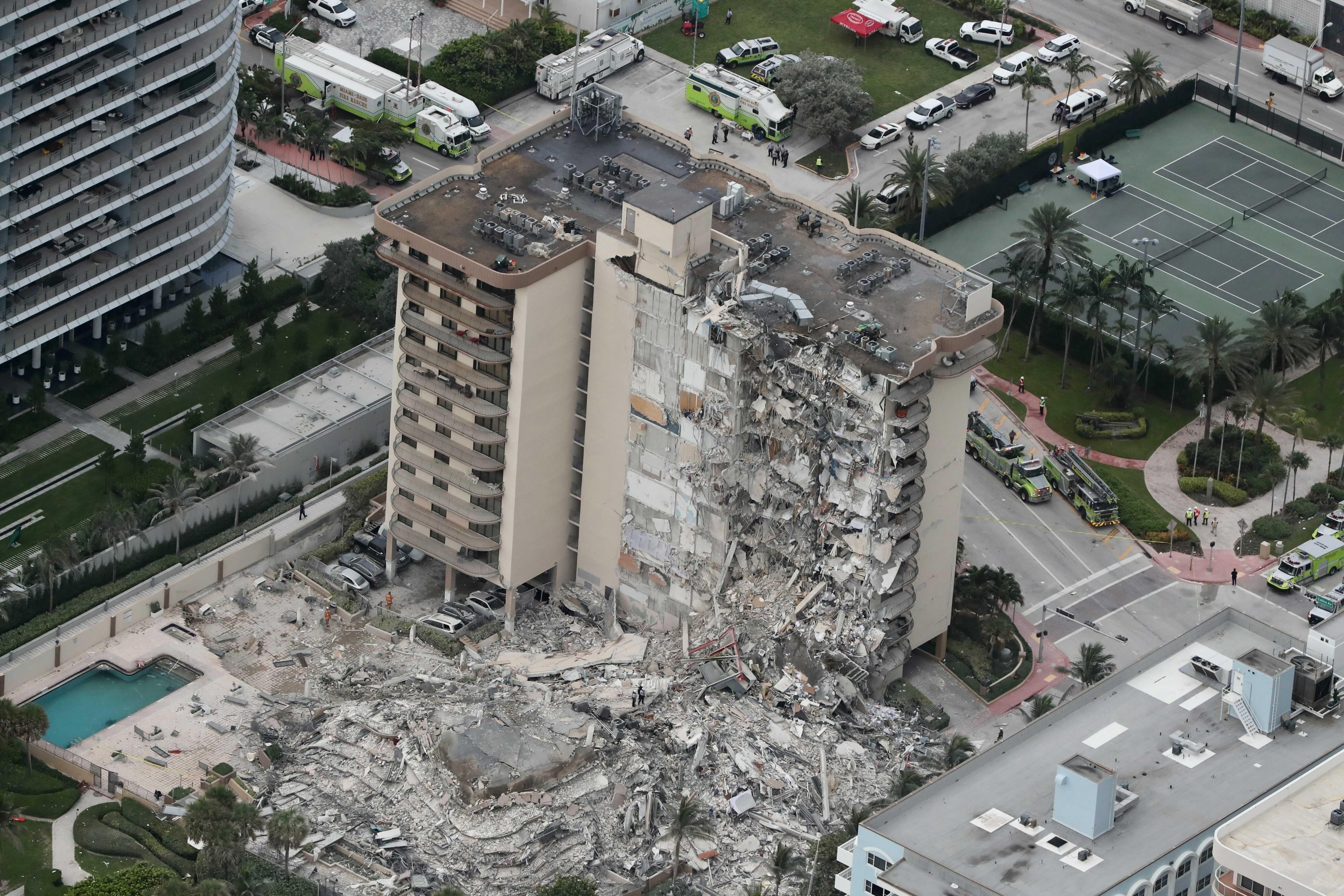 First responders assisting after a Miami building collapsed have heard banging coming from under the rubble but no voices.

The operation is shifting to search underneath all of the debris, after rescuers started their search above the ground.

About 55 of the 136 units at Champlain Towers South collapsed around 1.30am, officials said, leaving huge piles of rubble and materials dangling from what remained of the structure in the beachfront community a few miles north of Miami Beach. 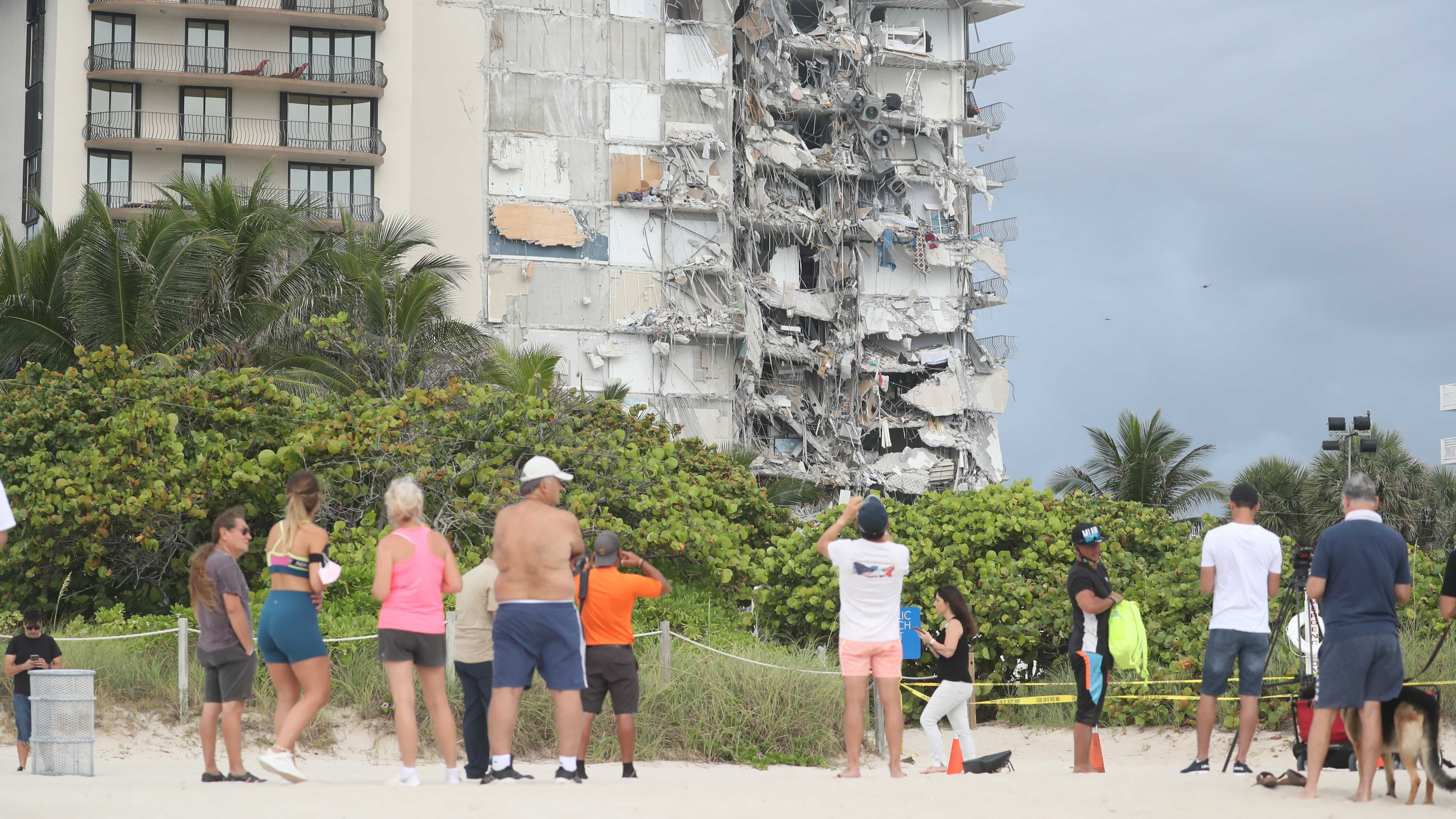 Authorities are concerned that every time the building shifts, there is a risk of fire starting.

A fire started earlier today, however, the flames were extinguished within 20 minutes.

People have been evacuated from the building as well as nearby buildings.

Recovery efforts for missing people could take up to a week, while an investigation into why the building collapsed could take longer. The Red Cross has arrived to set up temporary hotels for all of those people displaced.

Rescuers helped a boy from the debris alive, a witness said, and video showed responders helping others leave the standing portions of the building, sometimes using a bucket atop a fire truck's ladder. "We still have hope to be able to identify additional survivors," Florida Gov. Ron DeSantis told reporters near the scene on Thursday afternoon. "The state of Florida, we're offering any assistance that we can."

Besides the two pulled from rubble, 35 others had been helped from standing parts of the building, Mr Jadallah said. A resident on the third floor, Barry Cohen, heard what he thought sounded like an explosion. His apartment was intact, but when he opened his door and tried to leave, he "looked down the hallway ... and there was nothing there," he said.

"It was just a pile of dust, and rubble," and the building shook as he awaited rescue, Cohen told CNN's "New Day." 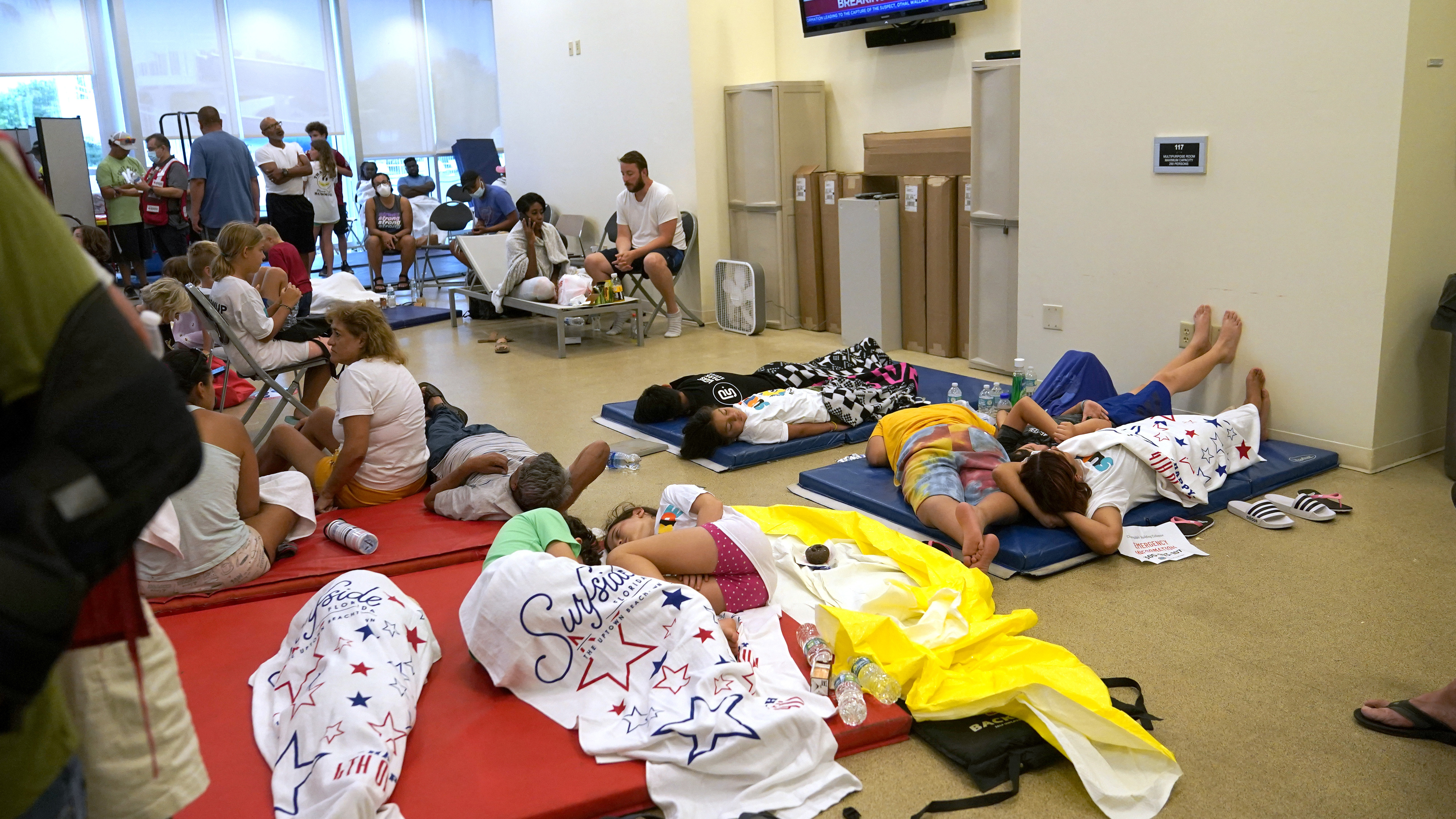 After about 20 minutes, a rescue crew used a cherry picker to help him, his wife and another resident from a balcony, he said.

Besides two people who were taken to hospitals, 10 were assessed and treated at the scene, Mr Jadallah said.

The cause of the collapse wasn't immediately known. 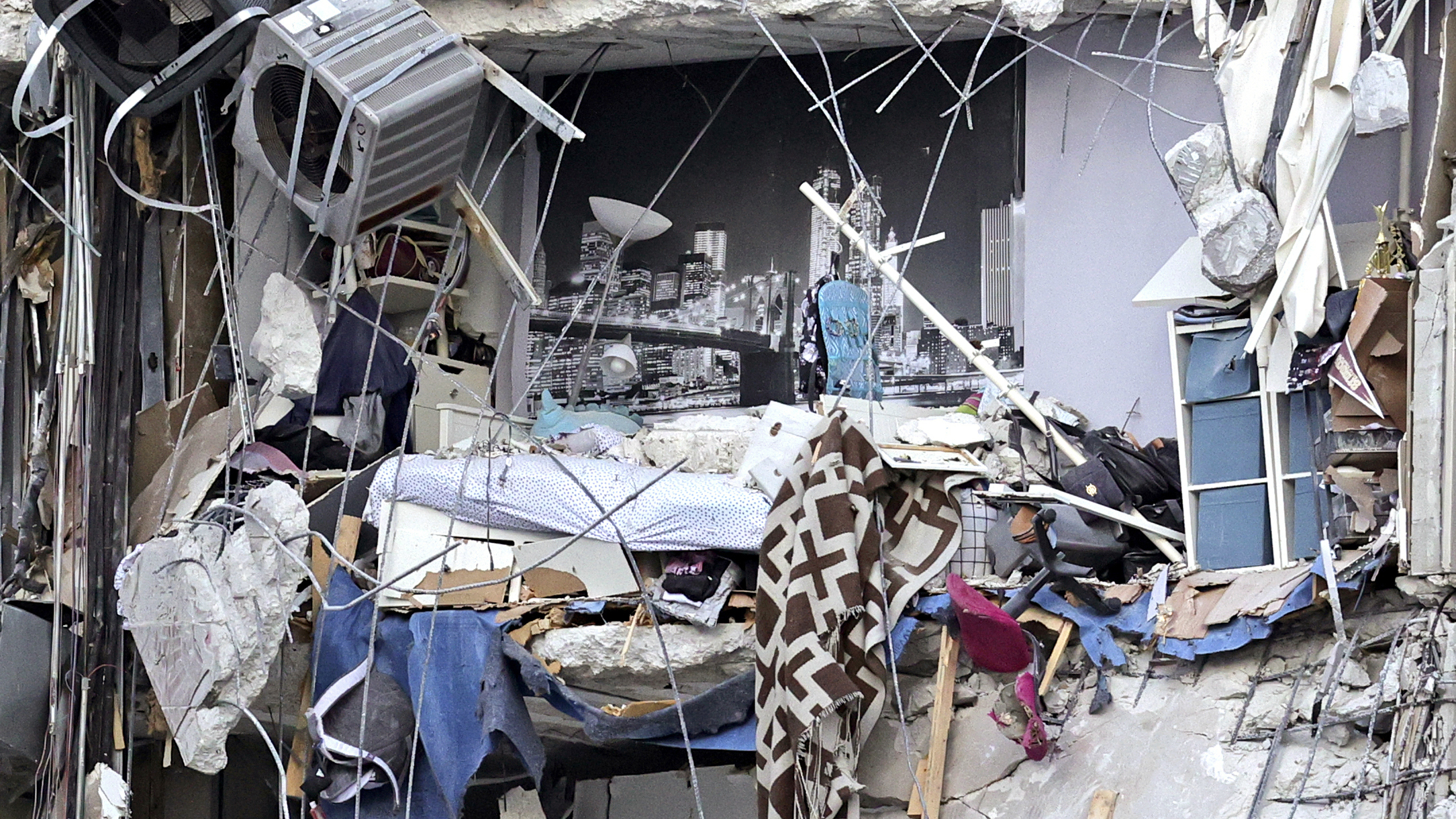 The building was undergoing roof work, but it's not known whether this was a factor in the collapse, Surfside Mayor Charles W. Burkett said.

It was built in 1981, according to online Miami Dade property records.

The affected area is predominantly Jewish, and rabbis and chaplains are in the area to assist, Levine Cava said. 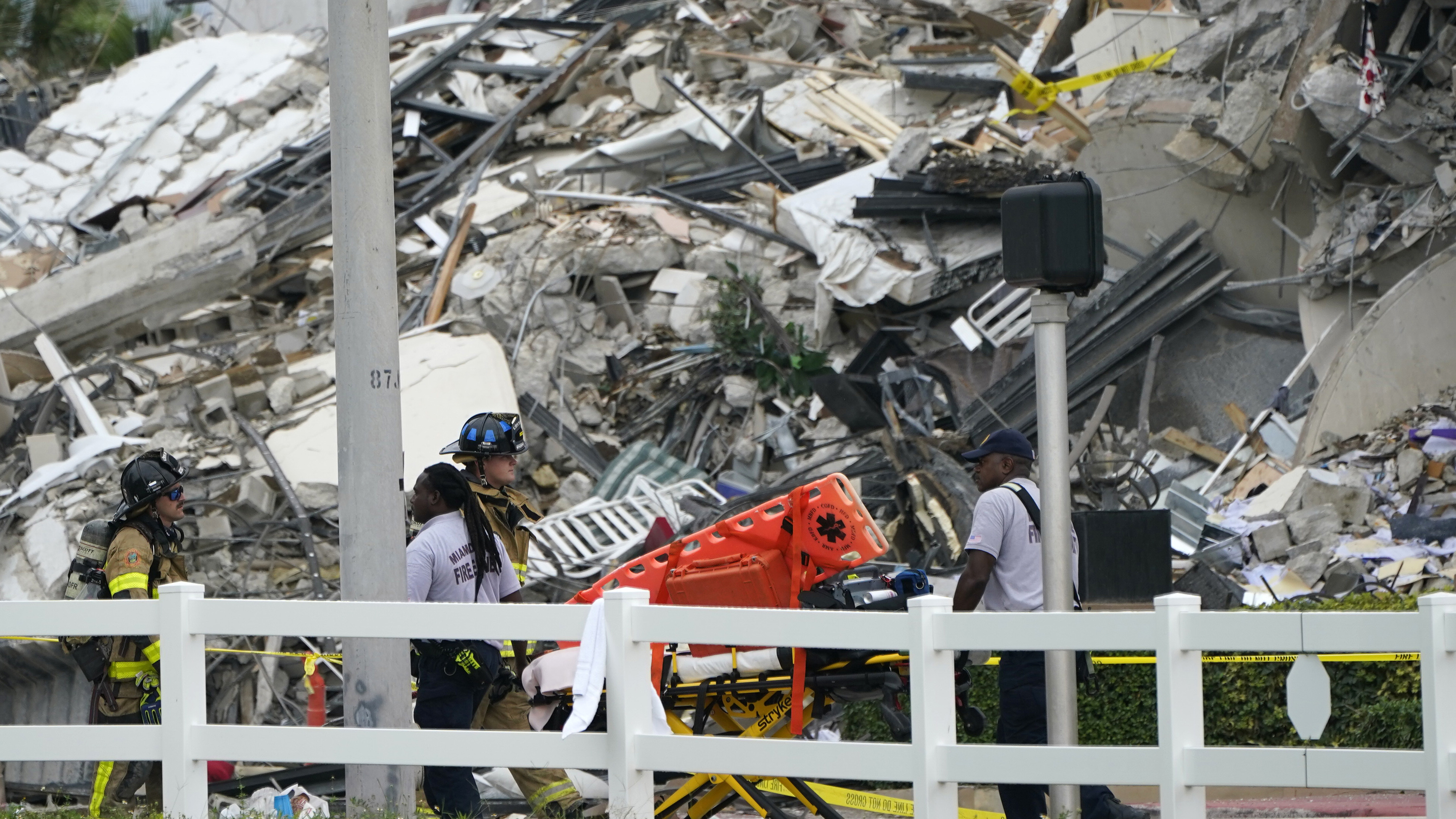 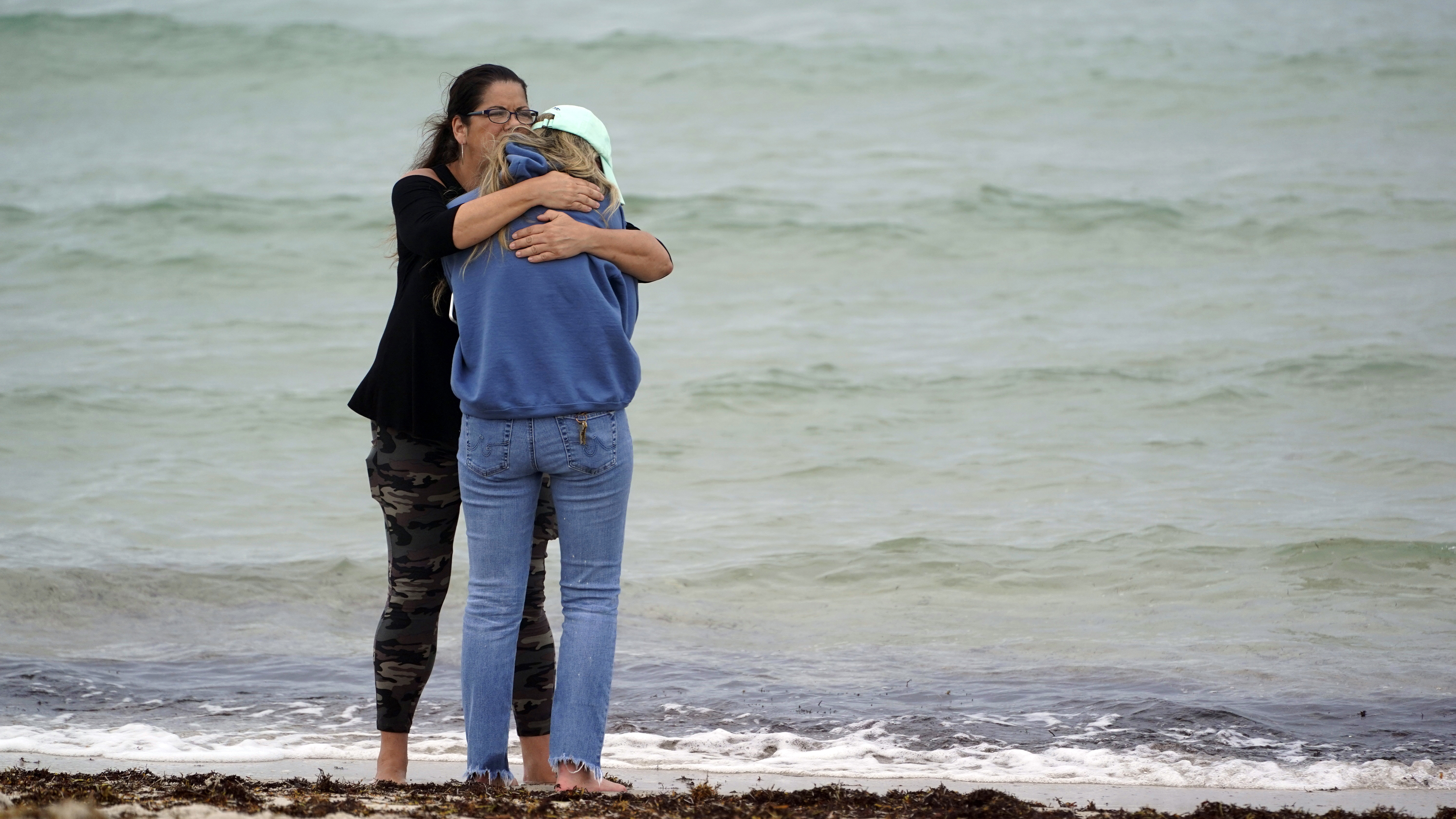 Levine Cava said the hotline has been set up for people trying to get information about their loved ones who may have been in the building: 305-614-1819.

Charles Burkett, mayor of the Miami council of Surfside, said the cause had not yet been determined but a collapse of this nature was "less likely than a lightning strike".

"This is a horrific catastrophe. In the United States, buildings just don't fall down," Cr Burkett said. The mayor told reporters 10 people were treated at the scene and the building had been cleared. But he said half of the building's 130 units had collapsed and it was unclear how many people were missing.

Cr Burkett went on to say the building was undergoing roof work but he couldn't say whether that was a contributing factor to the collapse.

"We are afraid the building may be in danger of additional collapse," he told CNN affiliate WSVN.

"The problem is the building has literally pancaked. It has gone down and I mean, there's just feet in between storeys where there were 10 feet (about 3m). "That is heartbreaking because it doesn't mean to me that we are going to be successful, as successful as we want to be to find people alive."

Surfside Town Manager Andy Hyatt said the search and rescue process could take a week and Florida Governor Ron DeSantis warned the city was "bracing for some bad news just given the destruction that we're seeing".

'How could anybody survive this?'

Footage from the ground showed fire crews pulling one survivor, a teen boy, from the rubble. 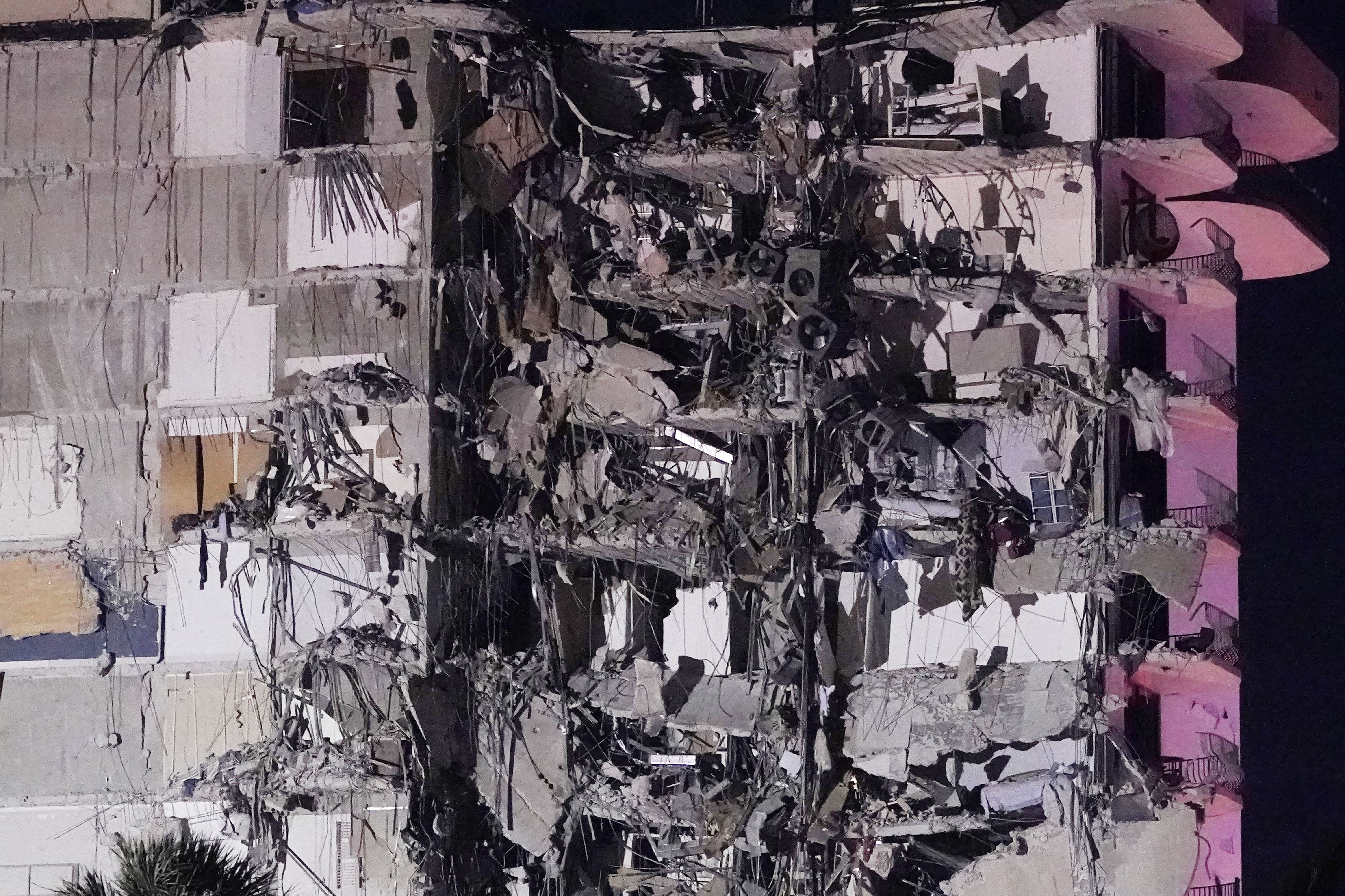 Nicholas Balboa was walking his dog when he heard the boy and eventually found him "sticking his hand up through the debris".

Mr Balboa said he and another person climbed up the rubble to help, and then found police and firefighters to help.

Fears for missing loved ones

The collapse sent a cloud of debris through the neighbourhood, coating cars up to two blocks away with a light layer of dust.

Authorities have not revealed how many people live in the building, but some witnesses in the exclusion zone say they fear friends or loved ones are still inside.

Kimberly Morales said she lived in the building across the street from the collapse and was awakened by building alarms going off and pounding on her door.

"I woke everyone up in the room because when I looked out the window, I saw everyone outside," she told CNN.

"I told everyone to hurry up and leave the building." 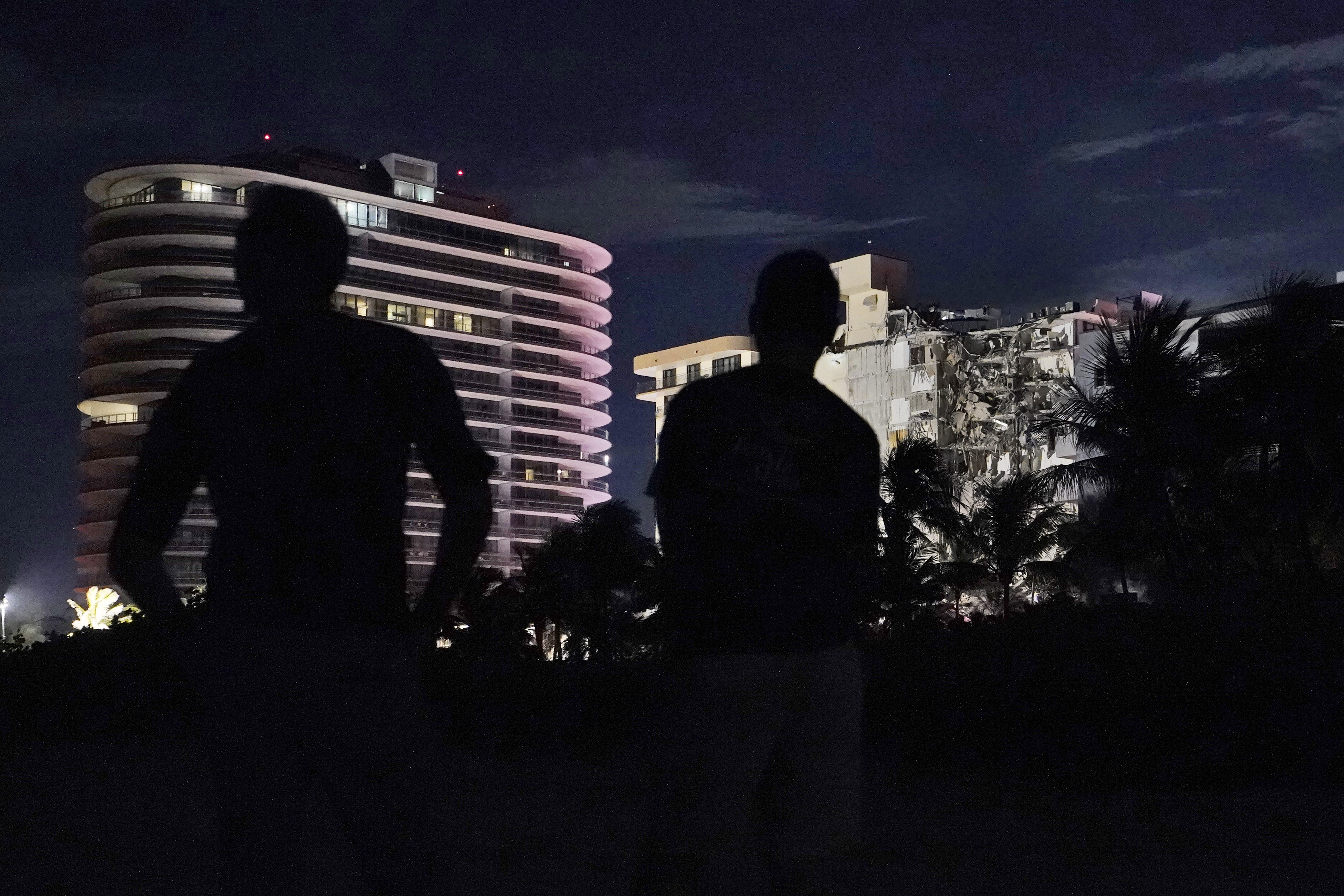 When part of his residential building collapsed, Barry Cohen knew he needed to get out of his apartment. But when he looked down the hallway, he said, "there was nothing there".

"It was just a pile of dust and rubble and paint falling from the ceilings," he told CNN.

After not being able to find a way out of the building, he said he went to his balcony, and by that time, the fire trucks and police had arrived. "When we were waiting for the firetruck to approach the building, the building was still shaking," he said.

"It just seemed like it was very unsteady. And I just, you know, knowing how what it looked like outside my door, I thought that any minute, we could be that same pile of rubble."

Authorities still on the scene

Police blocked nearby roads, and scores of fire and rescue vehicles, ambulances and police cars swarmed the area.

"I have never seen so many ambulances and police in my life all at once," a man who lives nearby told CNN.

"The entire building collapsed from the 14th floor.

"So there's a third of the entire building, that you cannot see from the street, but it's completely gone.

"It almost looks like 9/11 or if a bomb hit or something.

"It just completely wiped it out. There's a pile of rubble."

Survivors and those from surrounding buildings have been evacuated to a nearby community centre as crews work to find anyone else alive.

The area is a mix of new and old apartments, houses, condominiums and hotels, with restaurants and stores serving an international combination of residents and tourists.

The community provides a stark contrast from bustle and glitz of South Beach with a slower paced neighbourhood feel.