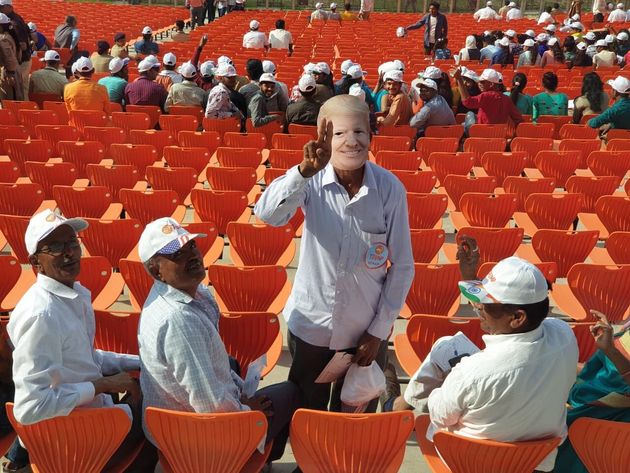 Shortly before Donald Trump left for his India visit, the US President retweeted a meme of his face superimposed onto a scene from the megahit movie Baahubali.

“Look so forward to being with my great friends in India”, Trump said alongside the clip from a war scene, where the ‘hero’, played by actor Prabhas, hacks his enemies to death and drags one across the ground by his collar.

Meanwhile in India, a previously unheard of organisation called the Donald Trump Nagrik Abhinandan Samiti, loosely translated as the Trump Citizens Felicitation Committee and widely believed to be a proxy for the Indian government, arranged for a crowd of over 100,000 supporters to be bused into a freshly renovated cricket stadium in Gujarat, Indian Prime Minister Narendra Modi’s home state, to give the US President the kind of mass adulation he craves.

The Dishoom, Bollywood’s preferred onomatopoeia for the sound of a violent punch thrown by action movie heroes since at least the 1980s, was supposed to reflect the supposed muscular nationalism of Modi and Trump.

By mid-afternoon, as Trump stood beside Modi in the western state of Gujarat and congratulated him for leading a “democratic, peaceful, tolerant, great, free country”, the explicit violence of the Baahubali tweet and the Dishoom song had a terrifying real-life parallel.

In the national capital in New Delhi, a Reuters photographer captured a chilling image of a bloodied man, identified as Muslim, cowering on the ground as a group of rioters wielding rods surrounded him.

The assailants were part of a riot fomented by Kapil Mishra, a Delhi-based member of Modi’s Bharatiya Janata Party (BJP), as part an ongoing face-off between the ruling party and grassroot groups of citizens over the Modi government’s plan to create a National Register of Citizens — a move that stands to rob millions of Indians of their citizenship. At least seven people have lost their lives in Delhi since this most recent round of violence began.

This breathless day and a half, from Trump’s tweet to the Dishoom song, to the riot in Delhi, captures the unnerving blend of absurdity, farce, tragedy and outright human suffering that characterises this period of global tumult where humanity’s fate is in the hands of the likes of Trump, Modi, Boris Johnson, Xi Jinping, Vladimir Putin and Jair Bolsonaro.

READ:  Unusual tactics used by other countries to fight COVID-19 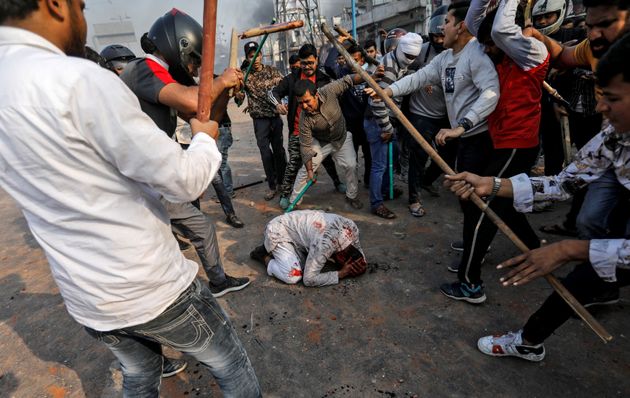 Trump’s Baahubali meme had been created by Twitter user @Solmemes1, who told HuffPost India over email that it was meant to “depict Trump and India uniting to make the world a better place in ridding it of evil”.

The idea was “romantic”, Sol said, adding that they were American and a “true patriot” but wanted to remain anonymous. An Indian friend, they said, had introduced them to Baahubali.

Sol said they were having the “best day in life” after Trump retweeted the meme. A ‘united’ America and India sends a ‘powerful’ message to the world, they told HuffPost India over email.

Clearly, much has changed since the time Trump appeared on WWE and Modi was denied a visa to the United States for his role in the Gujarat riots of 2002 where at least 1,000 people were killed (according to official figures) during his tenure as Chief Minister of the state.

“Imagine, an American president, right here in his [Modi’s] home, Ahmedabad. Remember when America had even banned him from stepping on to their soil?” said Manorma Kharde, a BJP municipal councillor from Vadodara, at the event. “But look at Modi, he got the very president of that country here.”

Trump’s visit was the most significant of any US president, Kharde insisted, offering a truly Trumpian view of the world, because he had flown straight to Ahmedabad.

A Mumbai-based businessman, who claimed to have produced two Gujarati films, danced non-stop through the event. He wore two masks at the same time, one of Modi, the other of Trump.

He told HuffPost India that he was bowled over by Modi’s marketing skills and the sheer number of people he had managed to get to Motera stadium to welcome Trump.

What of the riots in Delhi, though?

As for Trump, the crowd appeared ready to befriend him for life. With a 100,000 new friends, one can only imagine how many new enemies he must have made.

The only discordant note was when Trump mentioned the US’s friendly relations with Pakistan — marking him as perhaps the only person in India who could claim to have a friend in Pakistan in recent times without having sedition charges slapped against him.

The crowd responded with a grave silence, only to spring back to cricket match mode the moment Trump mentioned ISIS. America had “100% destroyed the blood thirsty killers ISIS,” he said, leading to a frenzied bout of hooting and cheering.

A few kilometres away from Motera stadium, the residents of Sharaniyavas slum had had a busy few days fending off the international media crews that had taken to visiting them after reports that the Ahmedabad Municipal Corporation had built a wall to hide the slum from Trump’s view.

The slum, home to at least 1,000 people, is nestled between a swanky hotel and a neat line of bungalows. The open spaces before the bungalows — tiny fields overgrown with shrubs and as per Indian cleanliness standards, littered with garbage — had also been ‘hidden’ by foisting green nets in front of them. While the ethical implications of walling up over a 1,000 people— some residents claim there are about 5,000 — to keep them out of view are shameful, it’s not so much the wall that they seem bothered about. The wall was an atrocity, some said, but it did not compare to the others they had to live with every day.

“What are they hiding?” Babulal, a 65-year-old who makes a living by sharpening knives and scissors, asked this correspondent. They are not hiding his poverty, he said. They are hiding the fact that despite the Prime Minister’s tall claims about providing cooking gas, there he was, cooking potatoes in an aluminium bowl on a pile of wood he had collected from forested areas in the city. As Babulal coughed in the thick smoke that coiled around his slight body and slithered into his low tenement, he recounted how his son, a daily wage labourer, had applied for the LPG connection that is provided under the PM’s much-publicised Ujjwala scheme.

“The first time he got it for Rs 100. When he went for a refill, they asked for Rs 800. We are poor uneducated people, we don’t know what they mean, who is fooling us,” he told HuffPost India. Occasionally, if his son has managed to find work every day for a month, the cylinder is refilled. If not, they cook on wood fire. Babulal’s earnings have reduced as he ages, so he has given up hope of LPG cylinders.

At Motera, Trump thundered about how in a few years, Modi will completely eradicate poverty. What does Babulal feel about Trump’s visit? “He is a guest, I guess. We should treat him well.”

After sundown, the slum is a dizzying labyrinth of huts, separated by snaking lanes with no light. Ushaji ben told HuffPost India that the lanes are littered with potholes, making it dangerous for children running in the dark. Many houses don’t have electricity and the sewage line is almost always choked, rendering the few bathrooms inside some of the houses useless.

“Only children can use these latrines. If entire families use it, the gutter will get choked and start overflowing, flooding all these lanes and our houses,” she said, recollecting how the area was initially a cremation ground, where settlements grew up under the Congress government.

The residents said that there is a toilet complex nearby which has six toilets each — for men and women — and every morning, hundreds fight for their spot. 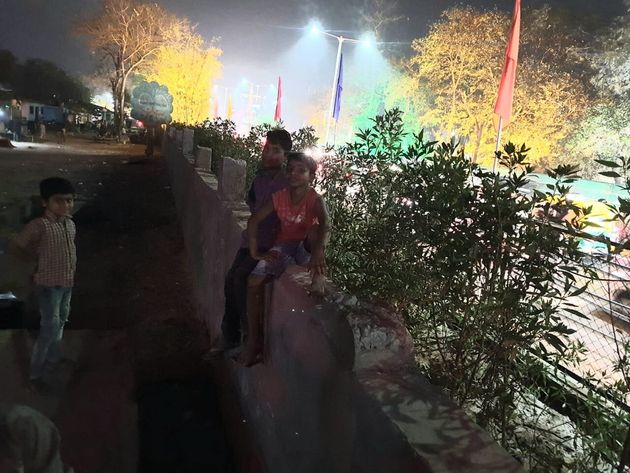 A few days before Trump’s visit, seven plainclothed policewomen allegedly arrived in autos and told activist and social worker Aswathy Jwala to pack up her protest and leave Gujarat immediately. Jwala was sitting on a hunger strike in front of the slum after reading reports about it being walled up. “When I resisted, they threatened to arrest my office worker who was accompanying me as well. He was not protesting,” she said.

So Jwala relented and went to the police station. There, she was given two options: leave Gujarat immediately, or continue protesting and get arrested. “I took the former option because I cannot raise awareness from inside the jail,” she said. She alleged that the police also warned her against coming back with ‘a motivation to protest ever again’.

Ushaji ben doesn’t care much for Trump’s visit or that they have been ‘hidden’ behind a wall. “Do whatever you like, but give us water properly. There are fights and physical scuffles over water here everyday,” she said.