Former state Del. Jennifer Carroll Foy’s supporters say she is best-positioned to challenge the former governor, but she has yet to gain broad name recognition. 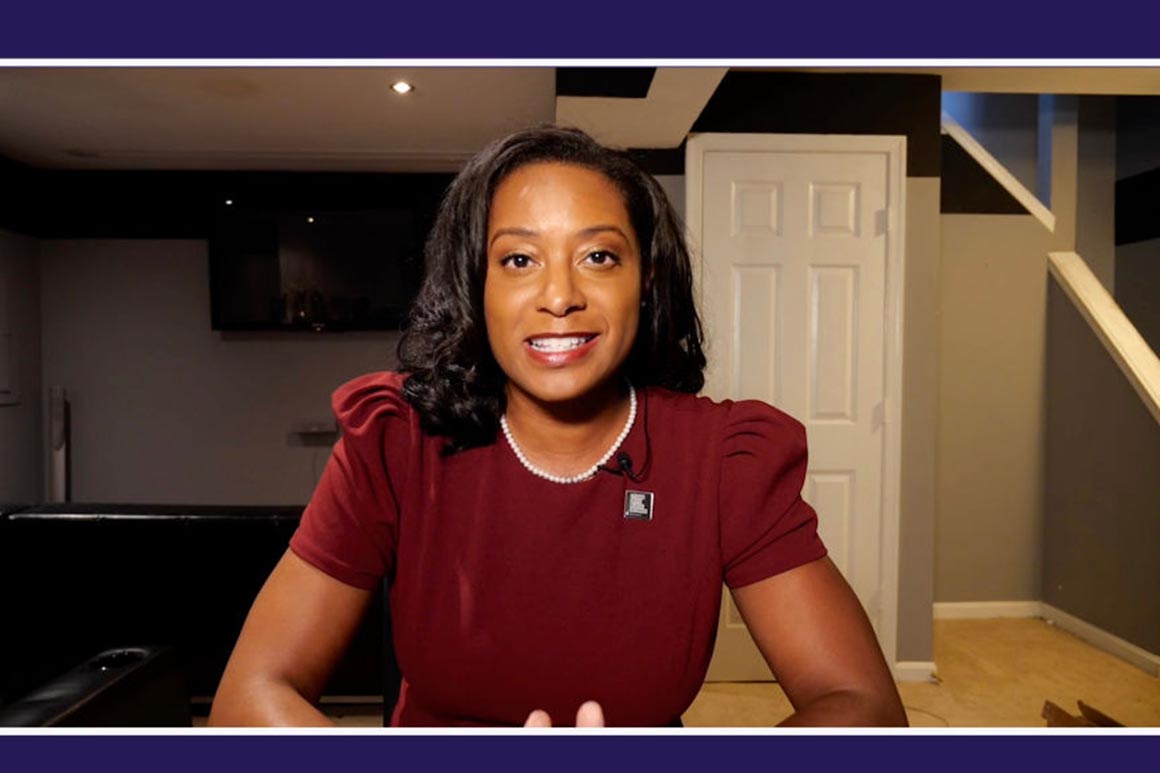 RICHMOND, Va. — In Virginia, 2021 was the best chance yet to elect a Black politician — and possibly the first Black woman in any state — to the governor’s mansion.

But with five weeks until the commonwealth’s Democratic primary, Terry McAuliffe, its white male former governor, is on track to secure the nomination easily.

The three Black Democratic gubernatorial candidates — all current and former state elected officials with deep Virginia roots — are struggling to gain broad traction with voters. And despite entering the race more than a year in advance, none has topped 10 percent among voters, according to recent polling, or garnered enough name recognition to effectively challenge McAuliffe.

Most notably, they have so far failed to capture the attention of Black voters, a key voting bloc that makes up more than one-fourth of Virginia’s Democratic electorate.

“It is perplexing,” said Phyllis Randall, who chairs the board of supervisors in Loudoun County and endorsed state Sen. Jennifer McClellan. “When you have that much talent and greatness in a person, that hasn’t broken through.”

The washout is evidence that, thus far, Democratic primary voters in Virginia have prioritized pragmatism over racial representation. McAuliffe has maintained relationships with top Democrats since leaving office four years ago and holds the support of the commonwealth’s most influential Black leaders.

Even as Virginia has become more Democratic, the party is intent on ensuring it keeps its hold on the governorship — something McAuliffe has won once already.

Some of those supporting different McAuliffe alternatives have quietly suggested that the campaigns coalesce around a single candidate to counter the frontrunner’s commanding lead. Most Democrats are hesitant to embrace Lt. Gov. Justin Fairfax in light of sexual assault allegations made against him in 2019. But some see a path forward for the two Black women in the race, McClellan and former state Del. Jennifer Carroll Foy, with some progressives starting to coalesce around Carroll Foy.

McClellan has more than a decade of experience in the state Senate and played an instrumental role in passing a bill protecting voting access, earning her the support of prominent Democratic donors who supported Stacey Abrams’ gubernatorial run in Georgia. Carroll Foy, for her part, is a former public defender and relative newcomer to state politics who has garnered support from the likes of Rep. Katie Porter (D-Calif.) and national organizations like EMILY’s List.

As the second-highest fundraiser, Carroll Foy’s supporters maintain that she has the best chance at taking on McAuliffe. At an event here earlier this week, Carroll Foy dismissed the early polling as “premature.”

"Even in 2017, when I won my seat and flipped a district from red to blue, [polls] did not have me as winning," she said. "Our message, our record and our vision is resonating with people. That’s what we’re really excited about."

On the campaign trail, Carroll Foy has staked out the primary’s left lane, emphasizing bringing Virginia into the future, rather than the past — a subtle allusion to McAuliffe as a standard-bearer for the party establishment that, in the eyes of some liberals, hasn’t done as much as it could for families with low incomes and Black and Latino communities. The message is aimed especially at young voters and parents, as well as Black progressives who say they can see themselves reflected in both her candidacy and personal story when they meet her.

"She looks like me," said Donyata Washington, a Carroll Foy supporter, during a canvassing event here. "Most of our governors have not lived the life of the underserved. You really can’t know what we are going through if you haven’t been in our shoes."

Virginia’s constitution does not allow a governor to serve two consecutive terms — but McAuliffe would be just the second governor in history to serve the commonwealth twice if he wins.

He has the most money to promote his campaign platform — more than the rest of the Democratic field combined — and the state’s most powerful leaders are in his camp. Outgoing Gov. Ralph Northam endorsed his bid, as did two validators to Black voters: state House Majority Leader Charniele Herring and state Senate President pro tem L. Louise Lucas, who are co-chairs of his campaign.

"I think all of [the candidates] are more than qualified to be to run and can probably do the job. I just feel like Terry’s gonna be bigger and bolder," said state Del. Don Scott, a McAuliffe supporter whose district is in the heavily Black Hampton Roads region, echoing the campaign’s slogan.

Early voting began last week, and time is running short for McAuliffe’s opponents to derail his nomination. While no one has broken through to come within striking distance of McAuliffe, they note that roughly a third of voters in polls say they are still undecided.

Quentin James, founder and president of the Collective PAC, an organization that supports Black candidates running for office, said he can see a path for either Carroll Foy or McClellan in the primary’s final weeks. But, he added, it would require “a gigantic shift in the race” to make that path clear. Instead of outright endorsing a single candidate in the race, James said, the Collective PAC will donate $5,000 each to the Carroll Foy and McClellan campaigns.

“The number of undecideds right now, they could all break one way or the other,” James said. “But I think you need a big moment.”

And Carroll Foy has aimed to craft that big moment herself, against considerable odds: She was at 5 percent according to an April Christopher Newport University poll, with 78 percent of voters surveyed saying they have “no opinion” of her.

Despite failing to gain traction, there are some signs that she could emerge as McAuliffe’s chief opponent. Other than the frontrunner, Carroll Foy is the only other candidate currently running TV ads, pouring nearly a half-million into the pricey D.C. market this week. She has spent or reserved $771,000 in advertising, according to AdImpact — well below McAuliffe’s $2.2 million — while Fairfax and McClellan have yet to hit the airwaves.

Black Democrats have also sensed a shift in the commonwealth: Its voter demographics are younger and more racially diverse than ever, which helped deliver control of the state legislature in 2017. After 2020, with its reckoning on race and historic Senate victories in Georgia, Black politicians are more bullish on their chances at winning statewide elections.

The crowded primary, while celebrated by some as a sign of the party’s strength, has also created tensions among members of the commonwealth’s Black state legislators — a majority of whom have gravitated toward supporting McAuliffe.

“[Young Black leaders] are kind of frustrated, because they’re like, ‘You know, we wanted a Black leader. This is the opportunity for the Democratic Party to actually give back to Black women,’” said state Del. Josh Cole, who represents a majority-white district and serves as Carroll Foy’s campaign chair. “Don’t get me wrong, [McAuliffe] has a platform. He has a message. But it’s nothing like having the person themselves who lived through the struggle to write the policy, create the policy and lead the state.”

READ:  US man sues police for wrongful conviction after spending childhood in prison

Progressives have been particularly critical of McAuliffe on his criminal justice record, saying some of his acts as governor last decade don’t hold up well now. McAuliffe told the Fredericksburg Free Lance-Star in 2015 that he was “always going to come down on the side of law enforcement” on questions of public safety. It came as he vetoed a bill that would have limited law enforcement’s use of surveillance technology and drew the ire of some activists in the state, who condemned him as being too pro-police.

McAuliffe’s campaign points to his decision to redirect $750,000 in federal funds for military-grade police equipment to community policing initiatives as a sign that his relationship with law enforcement does not make him blindly in favor of increased police power. He also granted voting rights to more than 170,000 formerly incarcerated people while in office, making him one of the only governors in the country at the time to do so. It sowed goodwill among Black voters and criminal justice leaders alike.

“I would put my criminal justice record up against anybody in the country,” McAuliffe said in a recent interview during a campaign event in Alexandria.

Primaries can break late, which is giving some optimism to those who still believe it’s possible for Virginia to elect a Black governor in 2021.

“I think it’s too early to count candidates out,” said Aimee Allison, founder and president of She The People, which has not made an endorsement in the race but is supporting both McClellan and Carroll Foy’s campaigns. “We’ve seen time and time again, that women of color motivate the Democratic base. And if there’s a lesson that we should learn, it’s that money does not equal votes.”

But unless something changes soon, the other candidates will likely see McAuliffe skate through as long as any opposition among Black and progressive voters remains divided.

“They’re splitting up the minority vote and the more liberal leftist vote, and it’s just making it almost impossible to beat McAuliffe,” said Larry Sabato, director of the University of Virginia’s Center for Politics and a long-time observer of politics in the state. “They’ve pretty much condemned themselves to death.”