Tens of thousands of people have marched in protest of the arrest of a regional governor on murder charges.

Tens of thousands of people have marched Saturday (local time) across Russia's Far East city of Khabarovsk on the border with China to protest the arrest of the regional governor on murder charges, continuing a two-week wave of protests that has challenged the Kremlin.

Sergei Furgal has been in a Moscow jail since his arrest on July 9, and Russian President Vladimir Putin has named an acting successor. Protesters in Khabarovsk see the charges against Mr Furgal as unsubstantiated and demand that he stand trial at home. 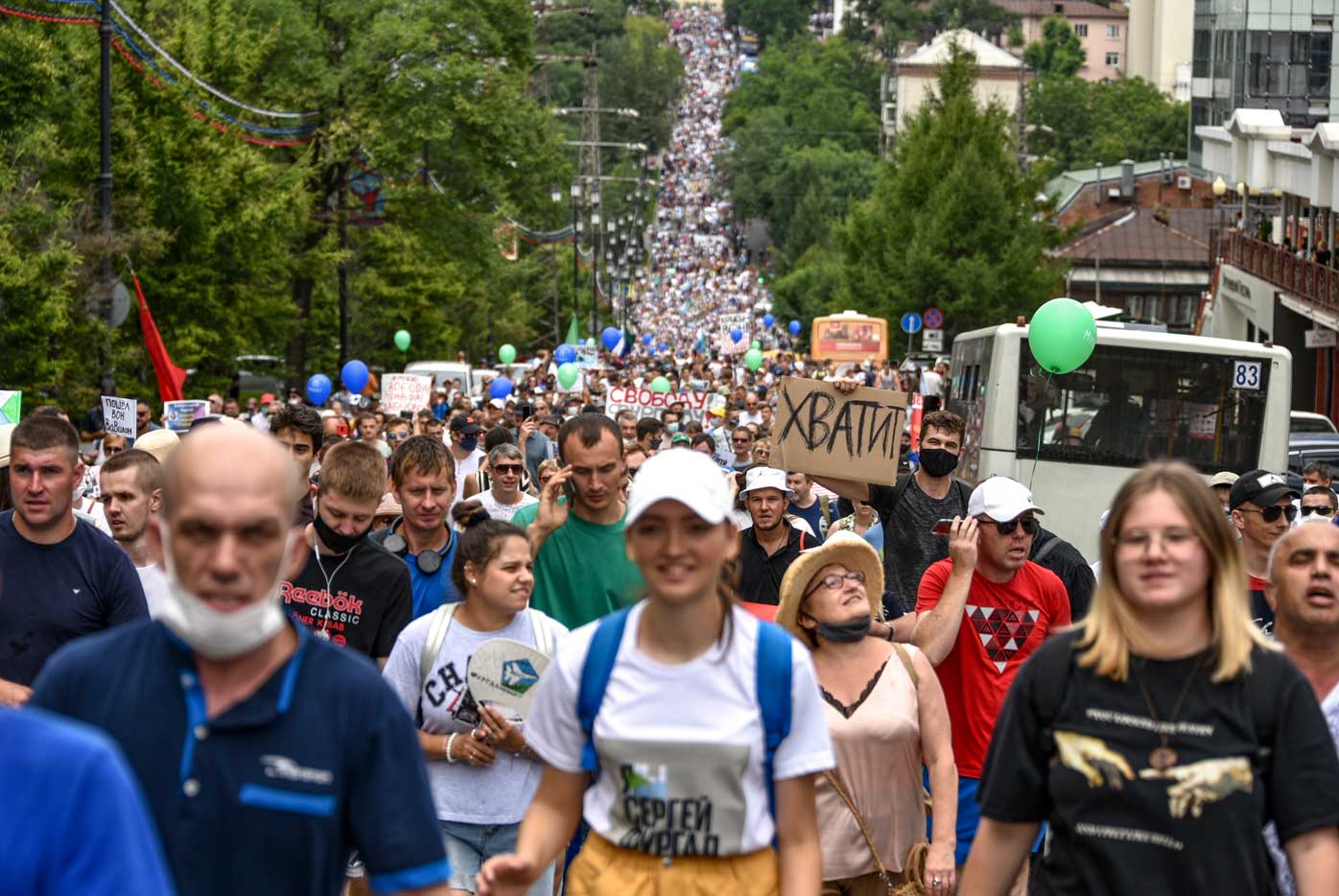 "I think people take to the streets because their vote in the 2018 election was taken away."

Unlike Moscow, where police usually move quickly to disperse unsanctioned opposition protests, authorities haven't interfered with the unauthorised demonstrations in Khabarovsk, apparently expecting them to fizzle out in the city 6100 kilometres east of the Russian capital.

But daily protests, peaking at weekends, have gone on for two weeks, reflecting anger against what residents see as Moscow's disrespect of their choice for governor and simmering discontent with Mr Putin's rule.

Local officials' attempts to discourage people from joining the demonstrations by warning about the risk of coronavirus infection have been unsuccessful.

"We elected the governor and we want to be heard and decide ourselves what to do with him. Bring him here, and a fair and open trial will decide whether to convict him or not." 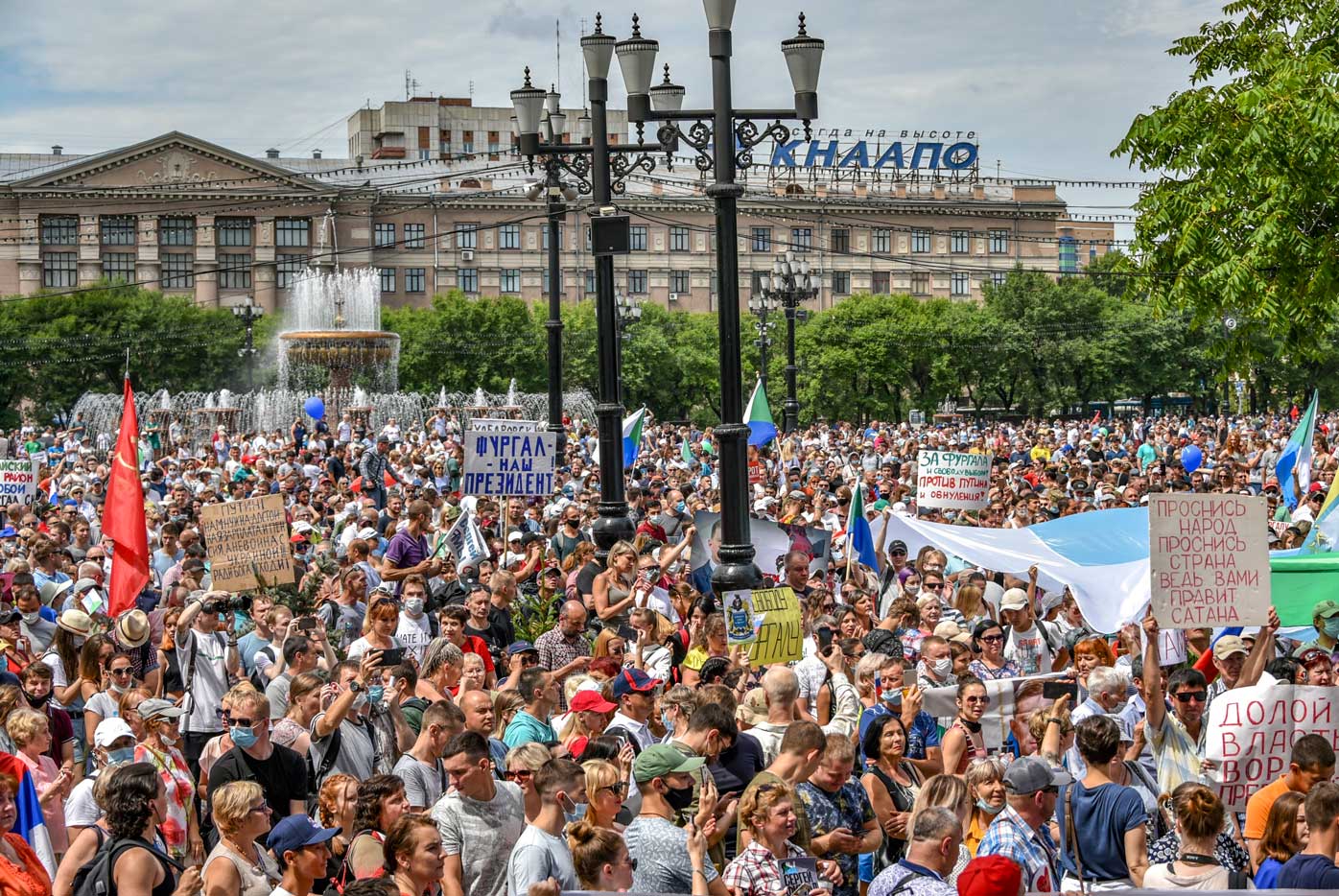 Demonstrations were also held in other cities of the Far East, and police didn't intervene. But in Moscow, police briefly detained several dozen activists who attempted to stage pickets in support of Mr Furgal and other detainees protested the city's ban on rallies due to the pandemic.

Authorities suspect Mr Furgal of involvement in several murders of businessmen in 2004 and 2005. He has denied the charges, which date to his time as a businessman with interests focusing on timber and metals.

A lawmaker on the nationalist Liberal Democratic Party ticket, Mr Furgal won the 2018 gubernatorial election even though he had refrained from campaigning and publicly supported his Kremlin-backed rival.

His victory was a humiliating setback to the main Kremlin party, United Russia, which also lost its control over the regional legislature.

During his time in office, Mr Furgal earned a reputation as a "people's governor", cutting his own salary, ordering the sale of an expensive yacht that the previous administration had bought and offering new benefits to residents.

"If we hadn't elected him, he would have been living quietly with his family and working at the State Duma. He would have had a normal life."

Mikhail Degtyaryov, a federal lawmaker whom Mr Putin named Monday to succeed Mr Furgal, is also a member of the Liberal-Democratic Party — a choice that was apparently intended to assuage local anger. If that was the plan, it hasn't worked.

Mr Degtyaryov, who has refrained from facing the protesters, left the city on Saturday for an inspection trip across the region.