Ex-Liberal staffer Brittany Higgins, who has alleged she was raped by a male colleague, declared the "system is broken" as she spoke to the March 4 Justice crowd in Canberra.

What started as a single tweet has turned into tens of thousands of people flooding city streets across Australia to take a stand against gendered violence in the Women's March 4 Justice rally.

After a long pause in front of a large crowd awaiting her address, Ms Higgins said she spoke today "out of necessity". "We are all here today not because we want to be here, because we have to be here. We fundamentally recognise the system is broken, the glass ceiling is still in place, and there are significant failings in the power structures within our institution," she said.

"We are here because it is unfathomable that we are still having to fight this same stale, tired fight.

"It's time our leaders on both sides of politics stop avoiding the public and side-stepping accountability. It's time we actually address the problem."

State organisers are calling for swift action to stamp out sexual assault and violence, in the wake of recent allegations towards the treatment of women.

The movement began 18 days ago when Melbourne academic Janine Hendry tweeted an idea to form a ring of people around Parliament House.

The protests could be the "biggest uprising of women that Australia's seen" as thousands demand government reform. 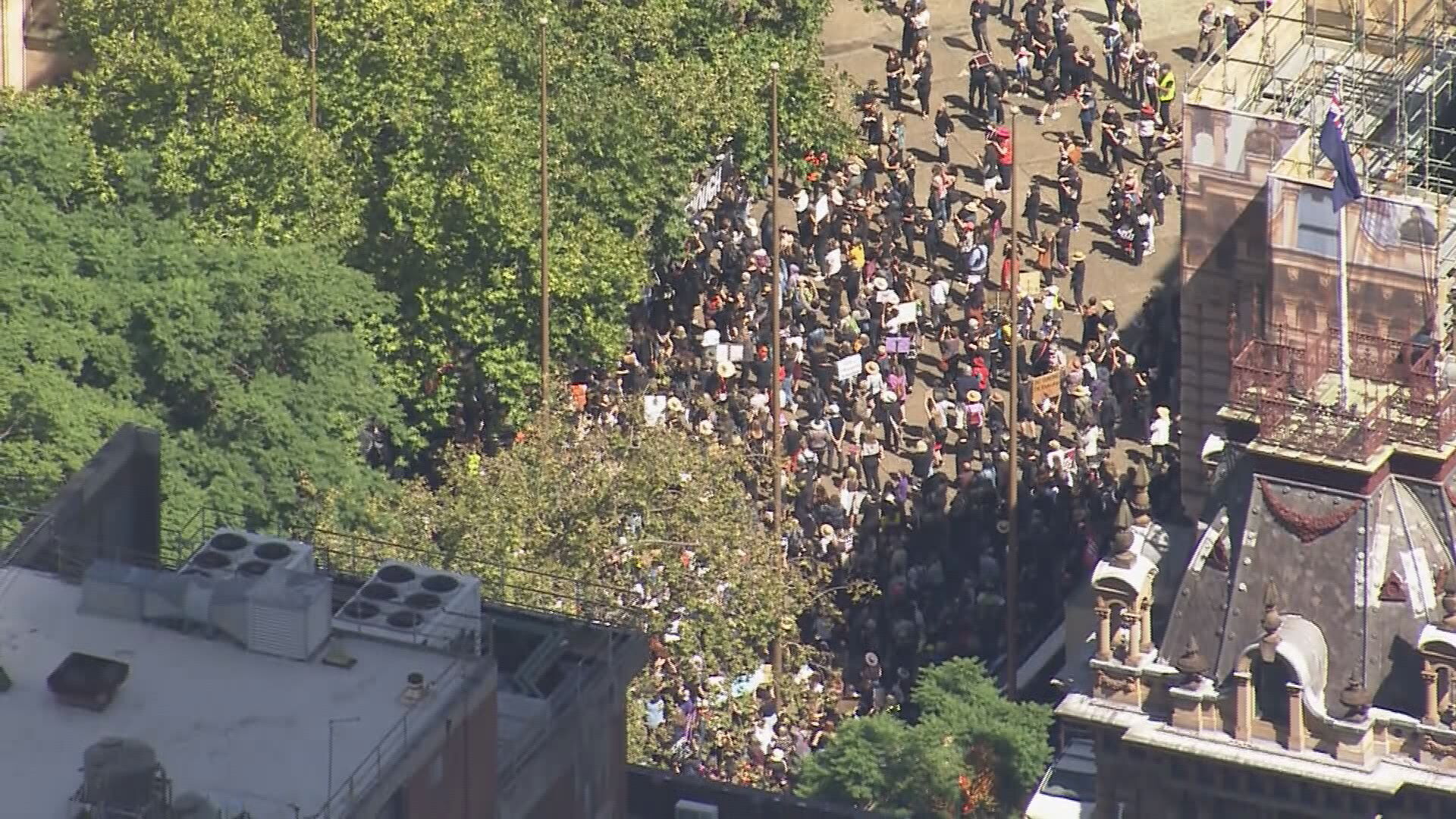 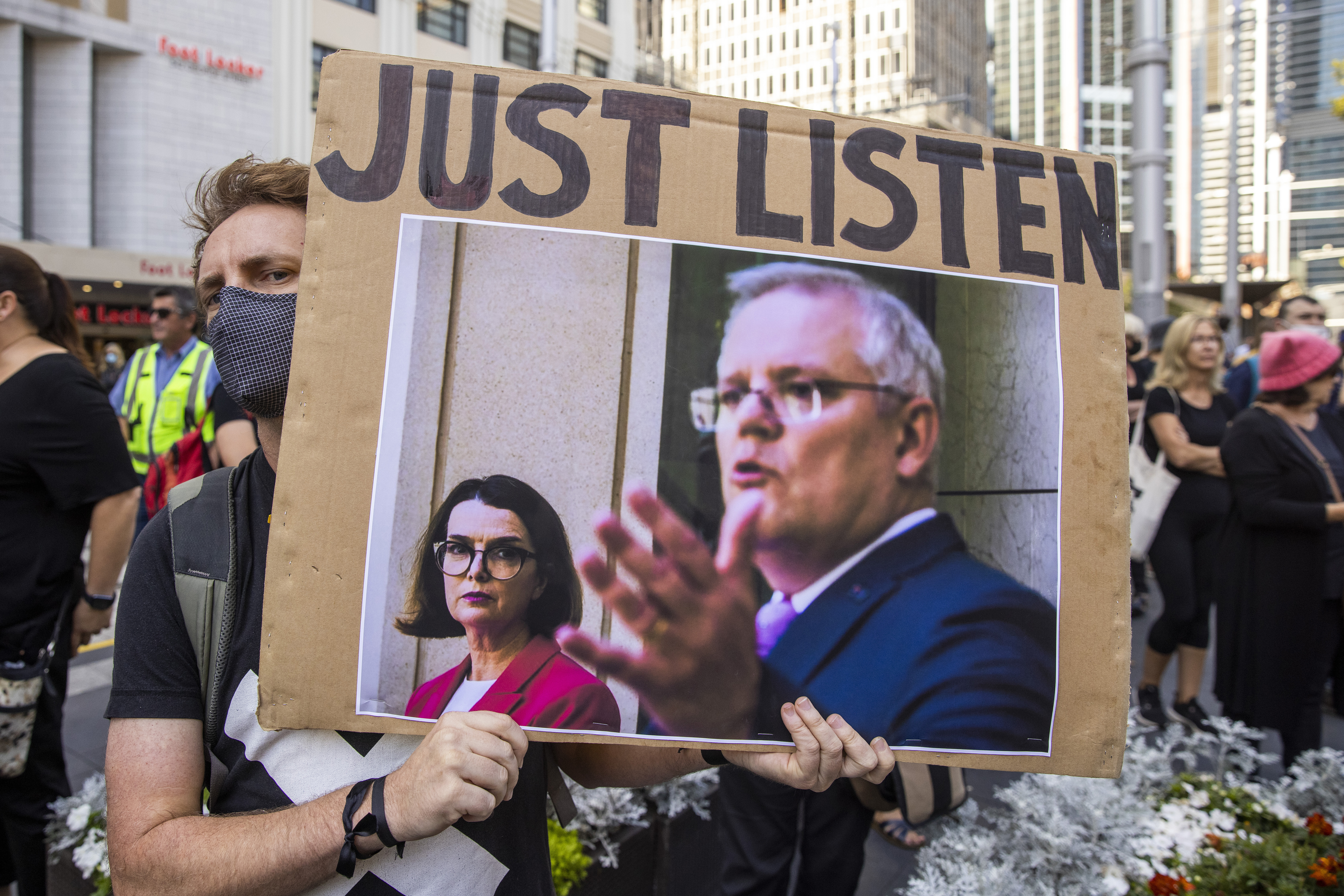 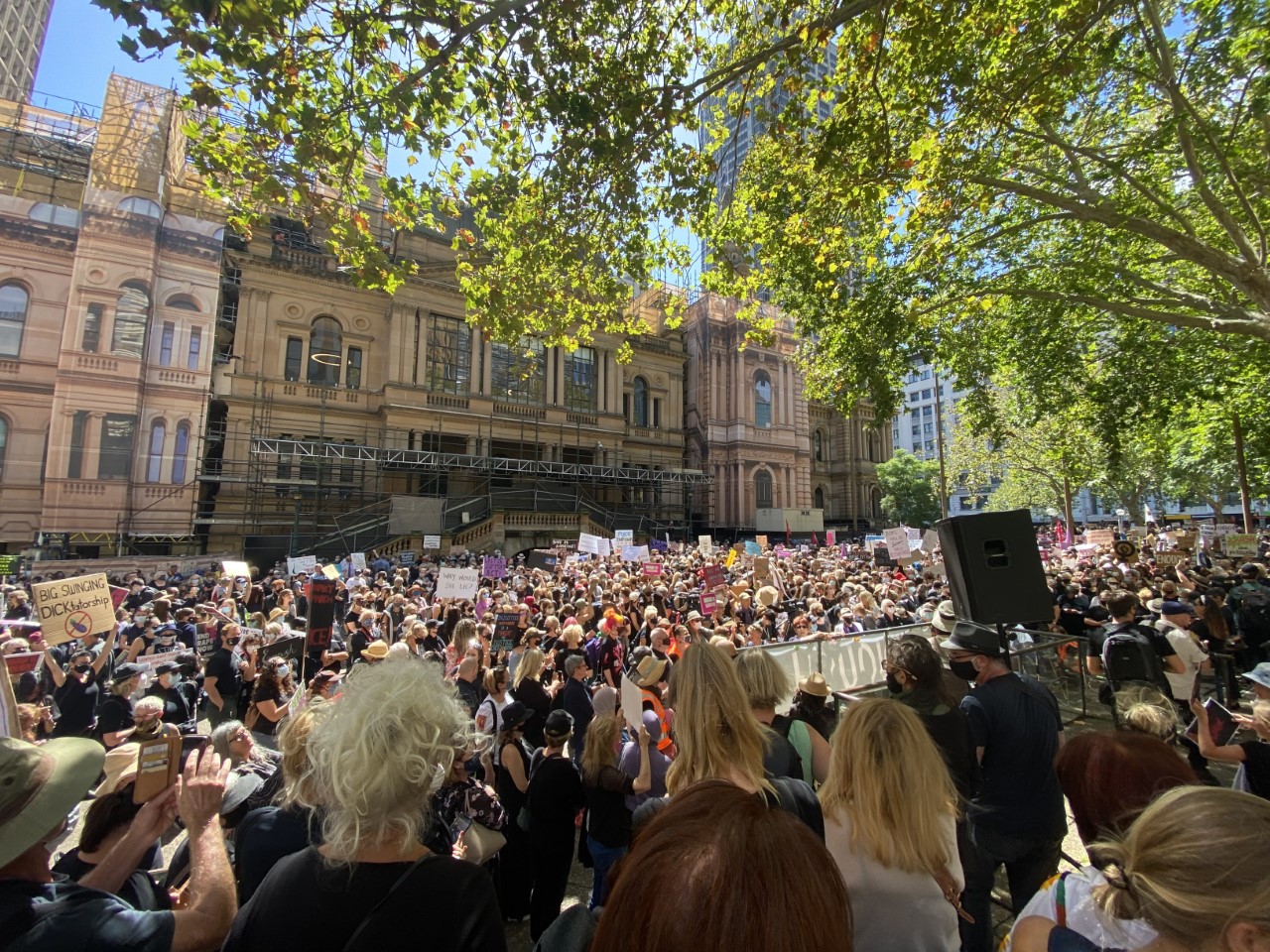 Aerial vision captured by 9News shows masses of people gathering in CBD locations around the country in protest.

Sydney march organiser Jaime Evans, 33, told 9News the group decided to take action into their own hands after politicians had failed to put change in motion.

"We're marching to say this problem is happening now, it's happening far too often, and we need to do something about it," she said. 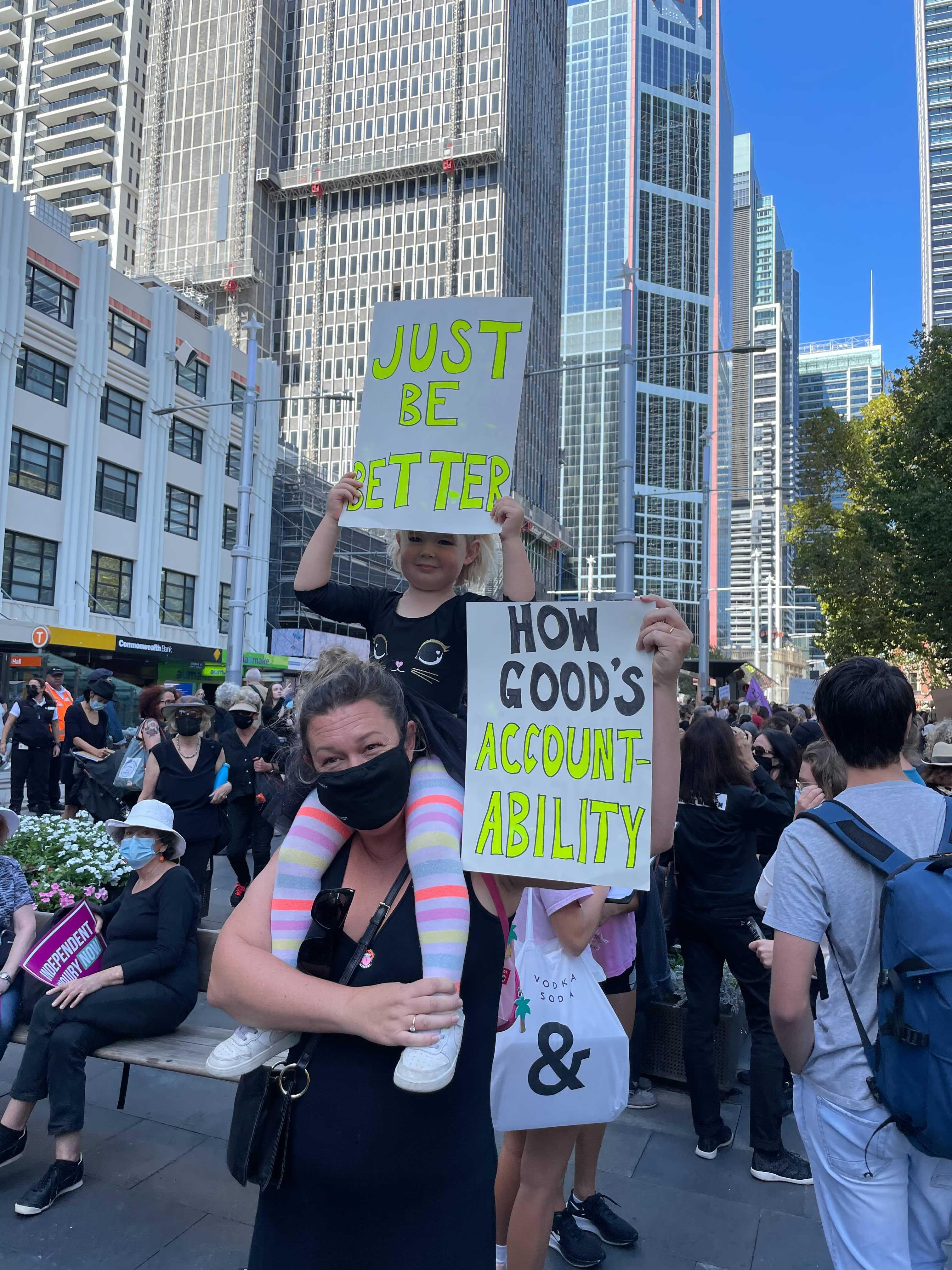 The Women's March 4 Justice movement, which has more than 40 rallies registered across the country, is calling for change in Federal Parliament, demanding all politicians address and "put an end to the issues of sexism, misogyny, dangerous workplace cultures and lack of equality in politics and the community at large".

The demands include police investigations into all sexual assault allegations by members of Parliament, a federal ICAC investigation and an independent review by the High Court of Australia into gendered violence within Australia's parliaments.

Ms Evans said women should be able to feel safe to move around in society without the fear of assault.

"Women should not and do not accept that the things we have to do to protect ourselves are a cost of living," she said. 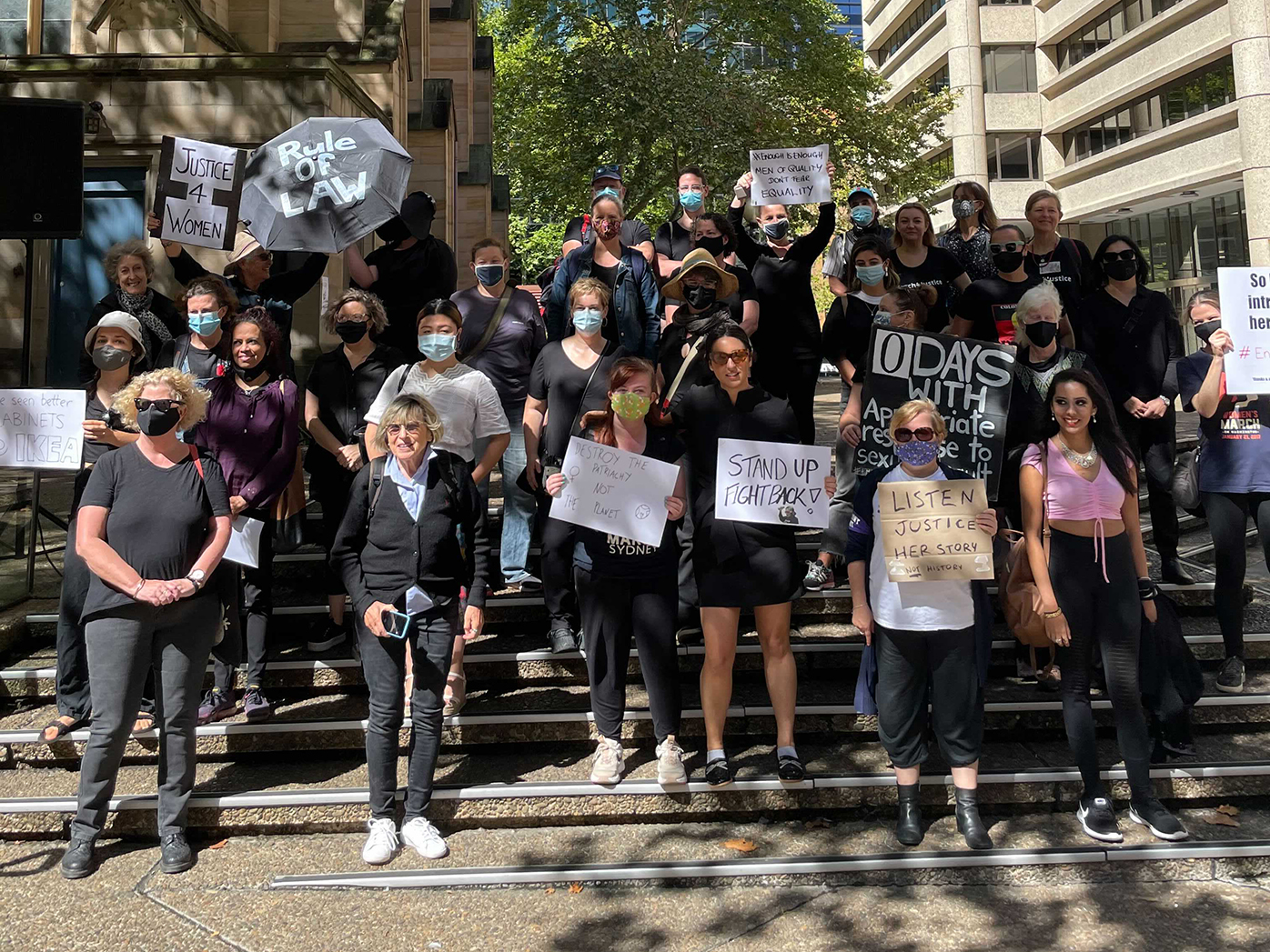 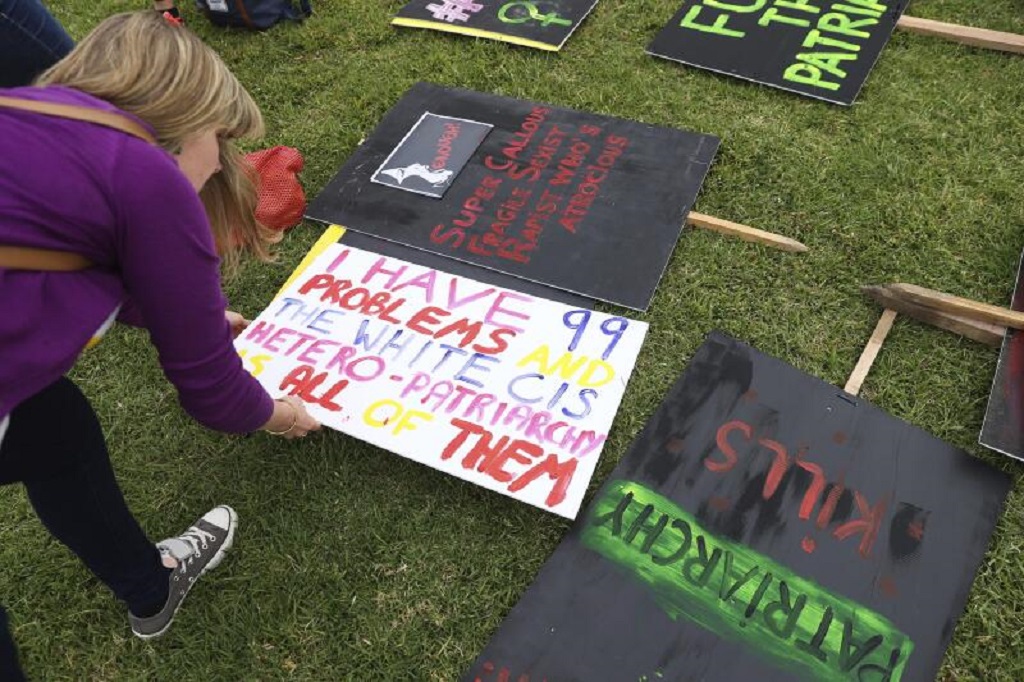 "Our freedom should not be included in that cost.

"The people that will be out there today are sending a message to the people who are survivors of violence and assault that we believe you and you deserve better than this and far better than the way you've been treated.

"So many women are having these horrific things happen in spaces where they should be safe."

Lyndal Gowland, 62, of Gowland Legal, said she was particularly concerned over the large number of women and children dying from domestic violence.

"Women have been marginalised by the system," she told 9news.com.au.

"I'm here to get justice for women."

Australian of the Year and sexual assault survivor Grace Tame has given an empowering speech to protesters in Tasmania as rallies ramp up in Hobart.

Ms Tame said the rallies were an opportunity to make some noise.

"The start of the solution is also quite simple - making noise. 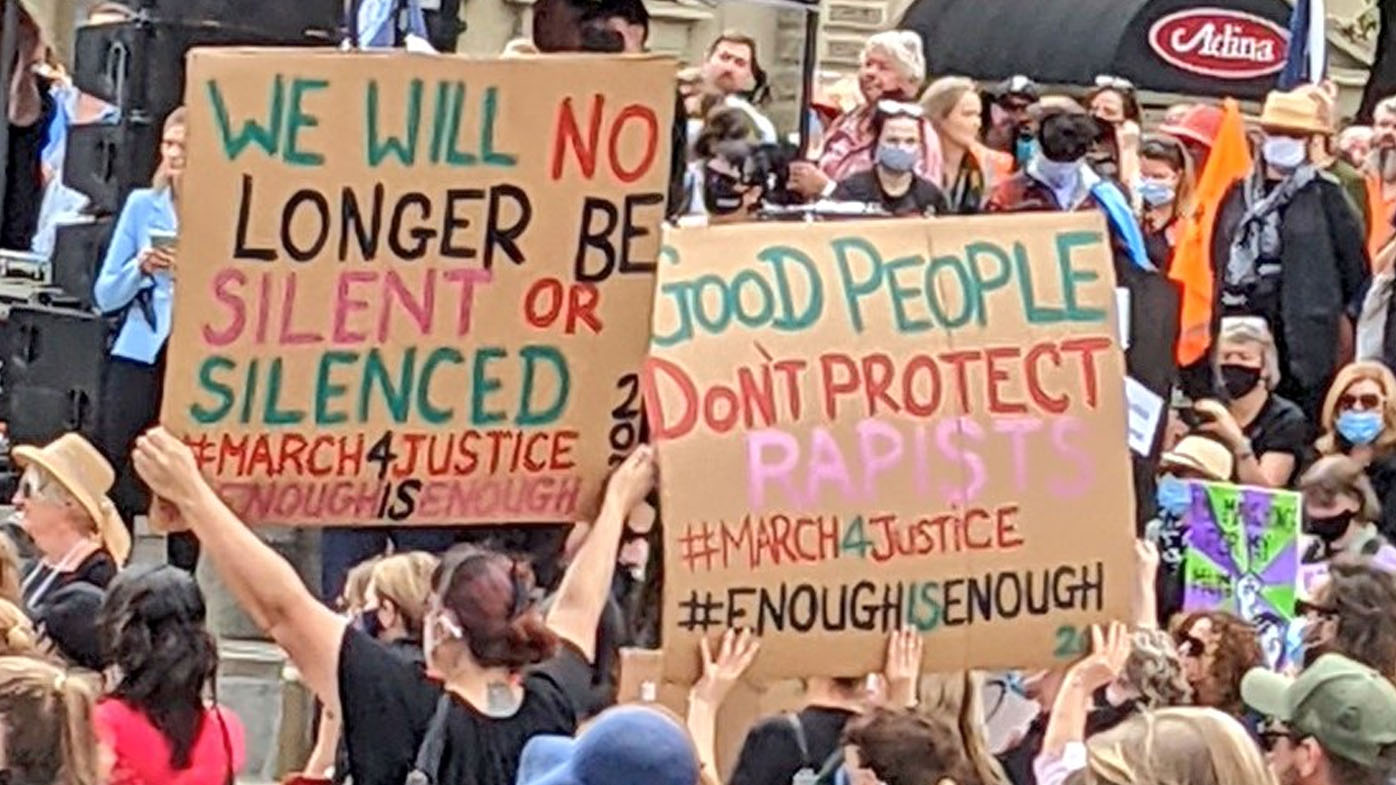 "I feel like I've been bashing my head against a wall recently, because these are not explosive revelations. These are common-sense ideas.

The mass rallies across Australian cities all started with a tweet by organiser Janine Hendry last month, in the wake of sexual assault allegations in the nation's Parliament.

The 58-year-old Melbourne academic pondered how many disgruntled women coming together around Parliament House it would take for politicians to action change. 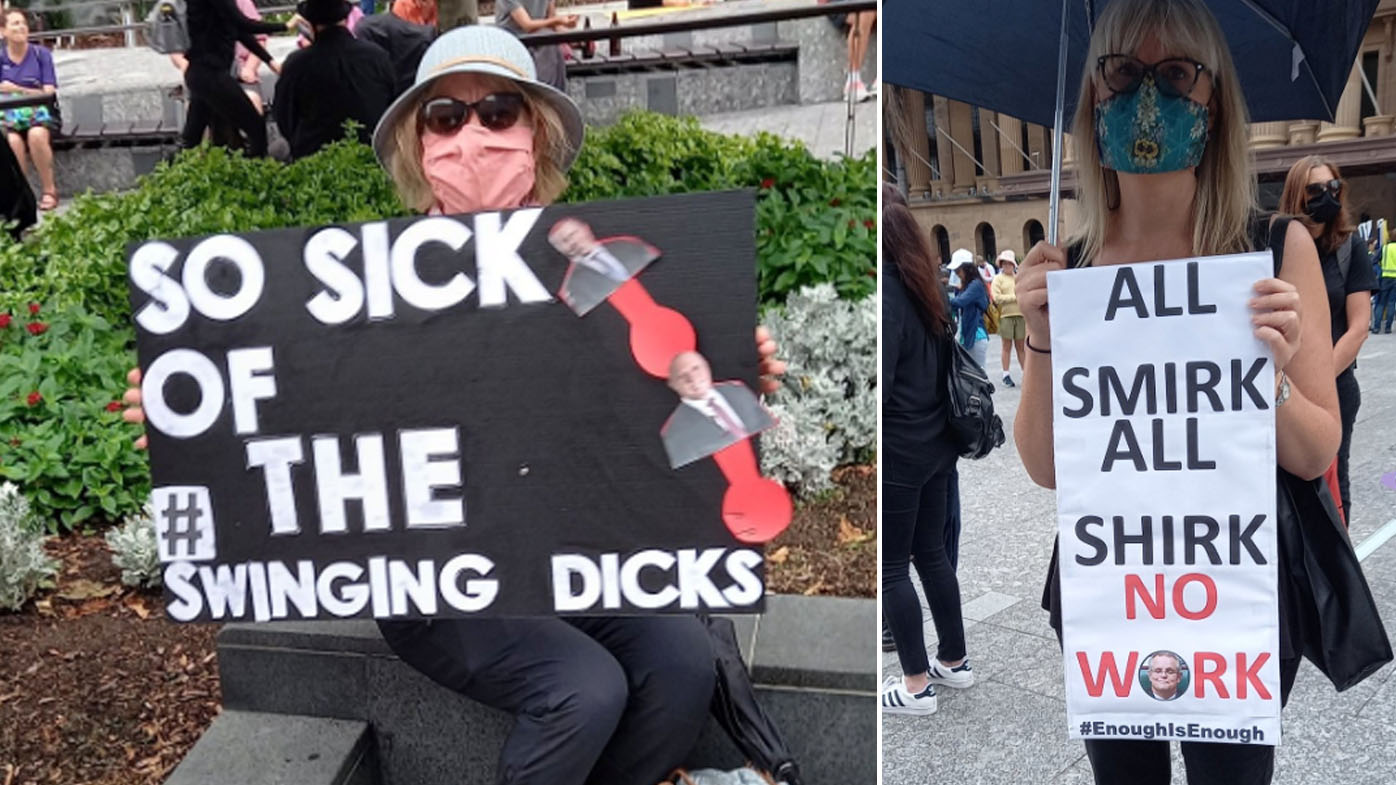 "I need someone to tell me if this is possible," she said.

"I then also need someone to estimate the distance and how many women we would need? I'm absolutely serious - if this is possible we need to protest at a time and place that tells not only this government, but the world that we've had enough."

Large crowds have made impassioned pleas to the Federal Government to listen to the gender violence reforms they are calling for outside Sydney's Town Hall.

Town Hall Square has filled with thousands of people, with crowds spilling out to George Street and beyond.

In a Welcome to Country, Auntie Shirley said sexual assault was deeply ingrained in Aboriginal history. 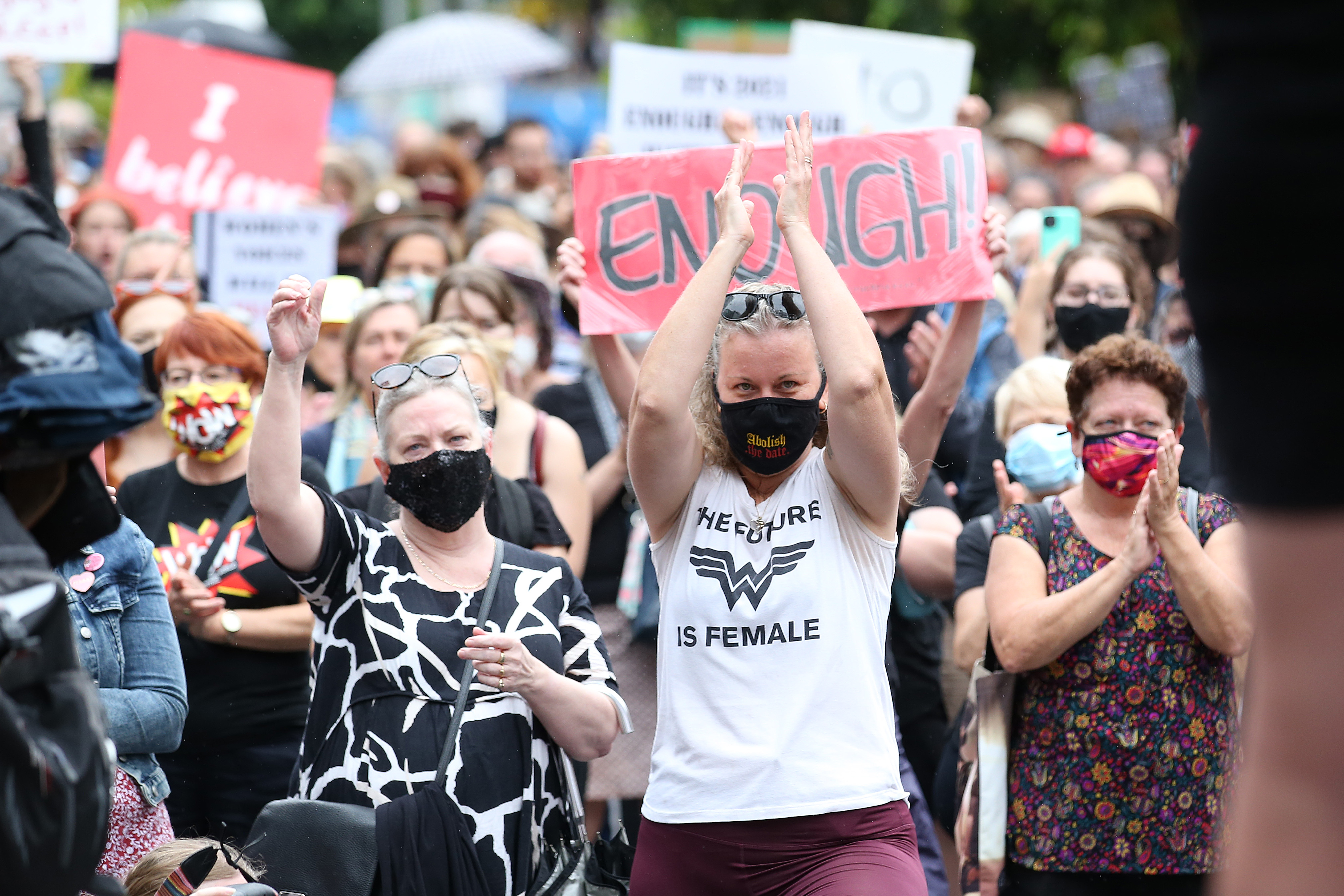 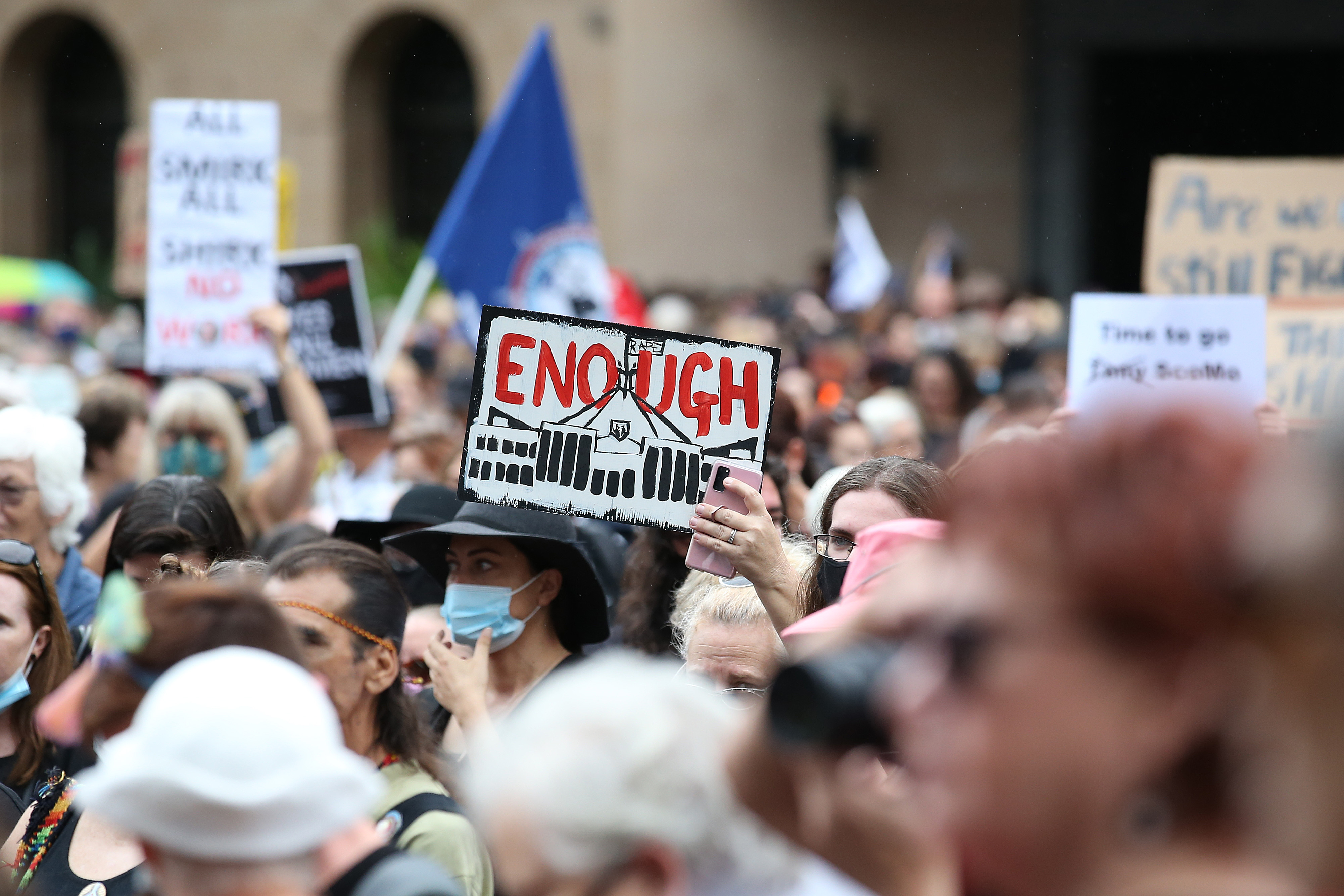 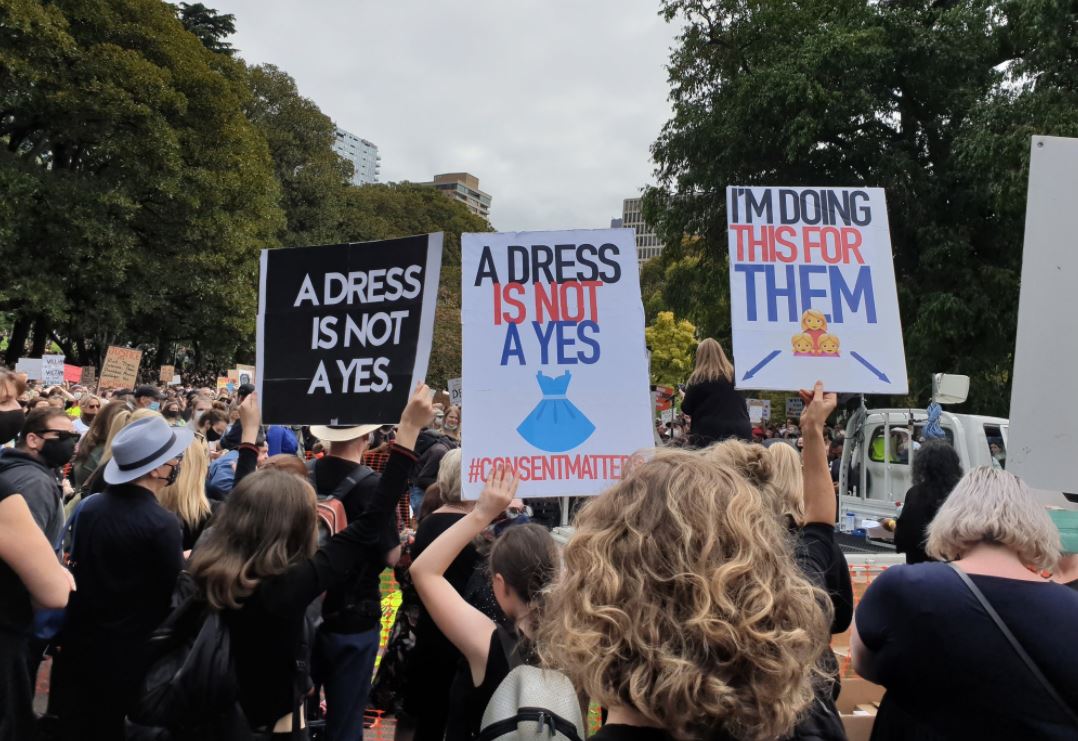 "The one thing I want to say is I will not stand by and let the most vulnerable people be raped," she said.

Mother Alison Hallworth attended the rally with daughters Cassidy and Tully, telling 9News she wanted to show them the fight against sexism and violence was not over.

"It's not just about being a mother, or a mother of daughters," she said.

"I want them to understand there's so much happening these days, the fight's not over.

"Nothing is going to change unless we do something." 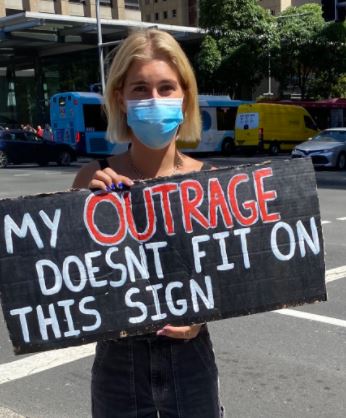 Michael Bradley from Marque Lawyers kicked off the day's speeches with a critique of the legal system and how it fails victims and survivors.

"If there is no justice, then the law has failed."

READ:  The Not-for-Profit Educator That's Been Serving NSW for 80 years

Protesters have scuffled with police in Melbourne's CBD as passionate pleas of justice for women turned violent this afternoon.

The splinter group from the march called for Prime Minister Scott Morrison and Attorney-General Christian Porter to stand down from their roles as activists say their voices are being ignored by political leaders.

9News understands no arrests have been made.

Protesters unfurled a list names spanning several metres of almost 900 women who have been killed by male violence since 2008. 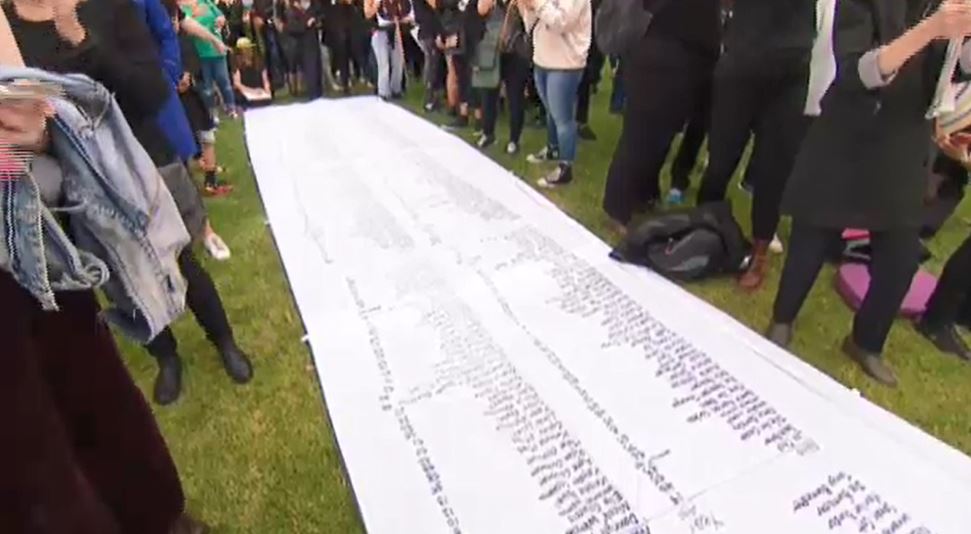 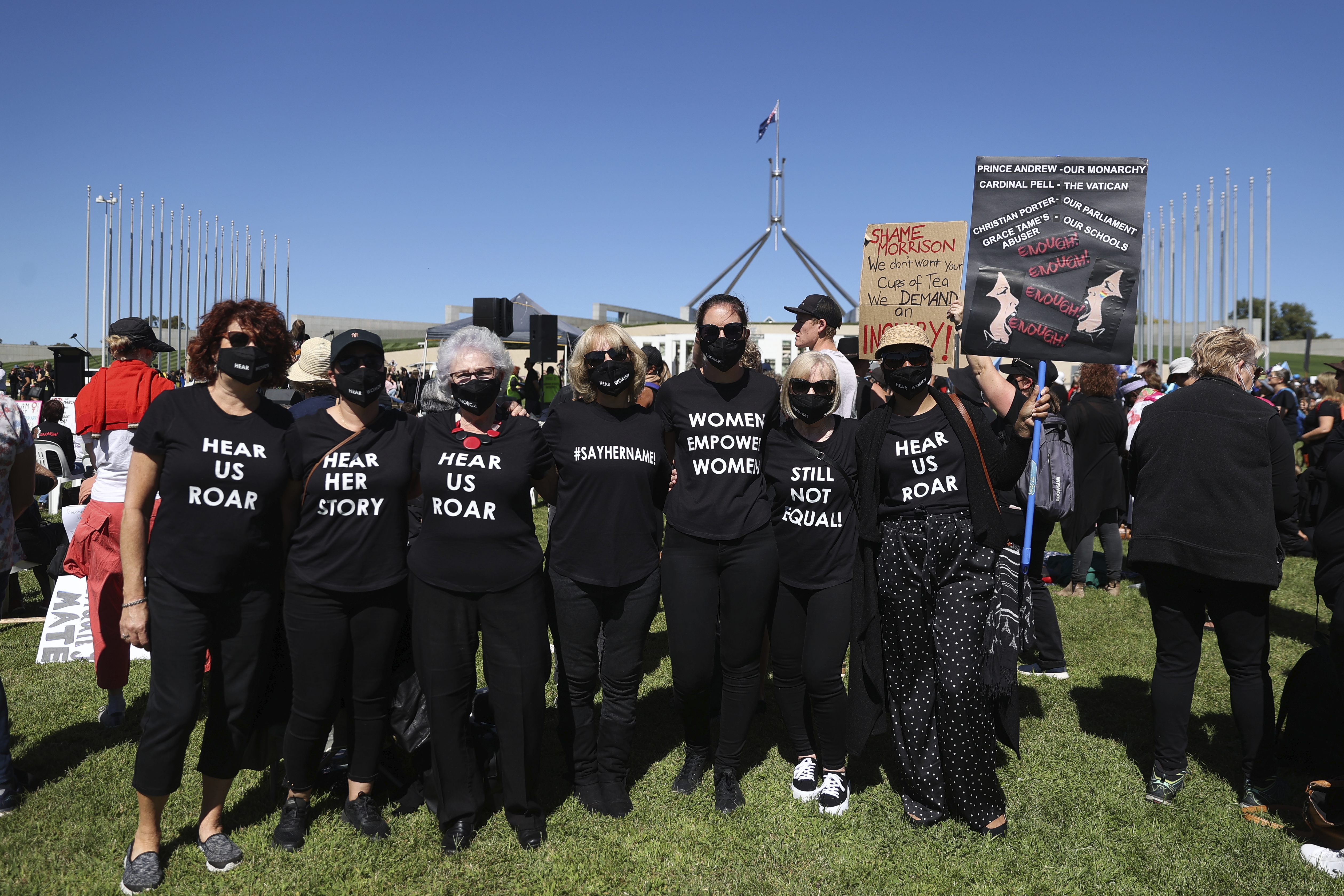 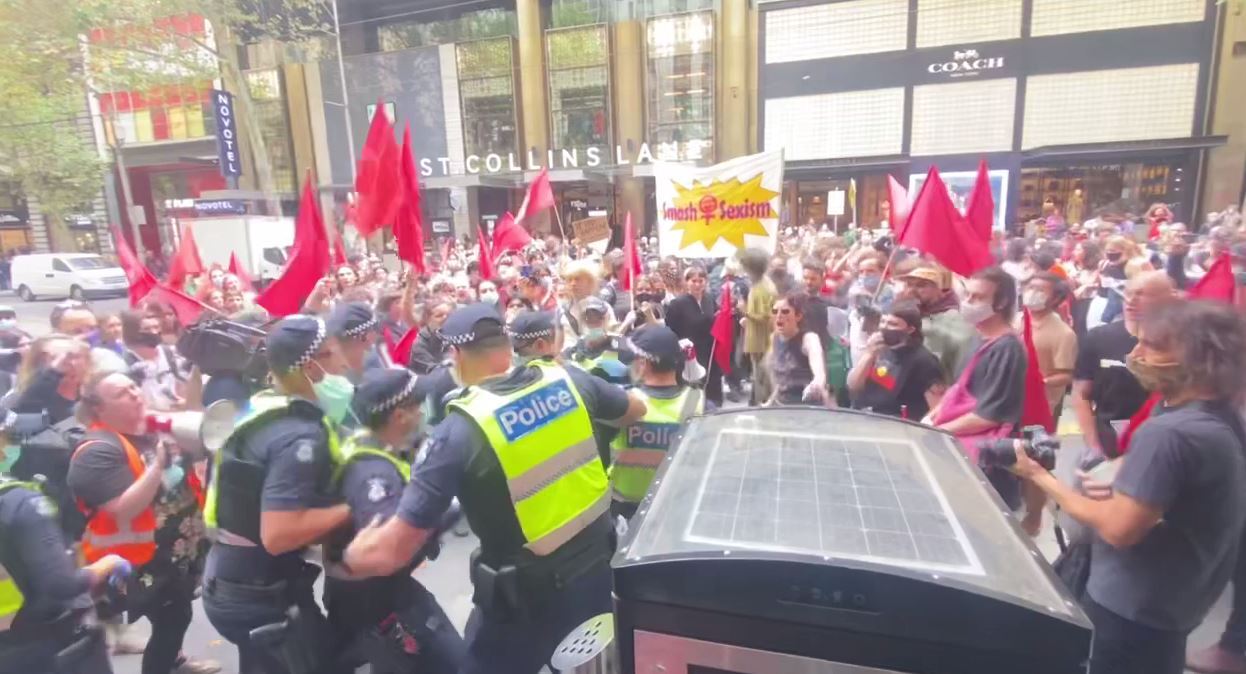 Federal MP Julia Banks made a speech at the march today, despite initially being afraid to speak.

"I said no because I was frightened, I was scared," she said.

"I've seen what those in the centre of power do … they try to silence you, they create fear, they use their power over you … and of course then follows the threats and the abuse."

Ms Banks said the overwhelming number of people rallying today moved her to join the demonstration.

"All of you in our home town of Melbourne, I couldn't feel more honoured to speak up with all of you.

"Our federal parliament is dominated by men in power … but there is something more powerful.

The former federal MP said she wanted to "speak for the thousands of women" who were unable to stand up for themselves for fear of persecution.

"I'm speaking here for the thousands and thousands of women who can't speak and who have been silenced … for fear of losing their jobs, their health, their safety or their life.

"I'm here today speaking up for the women – too many women – who have lost their lives, or taken their lives because of gendered violence." 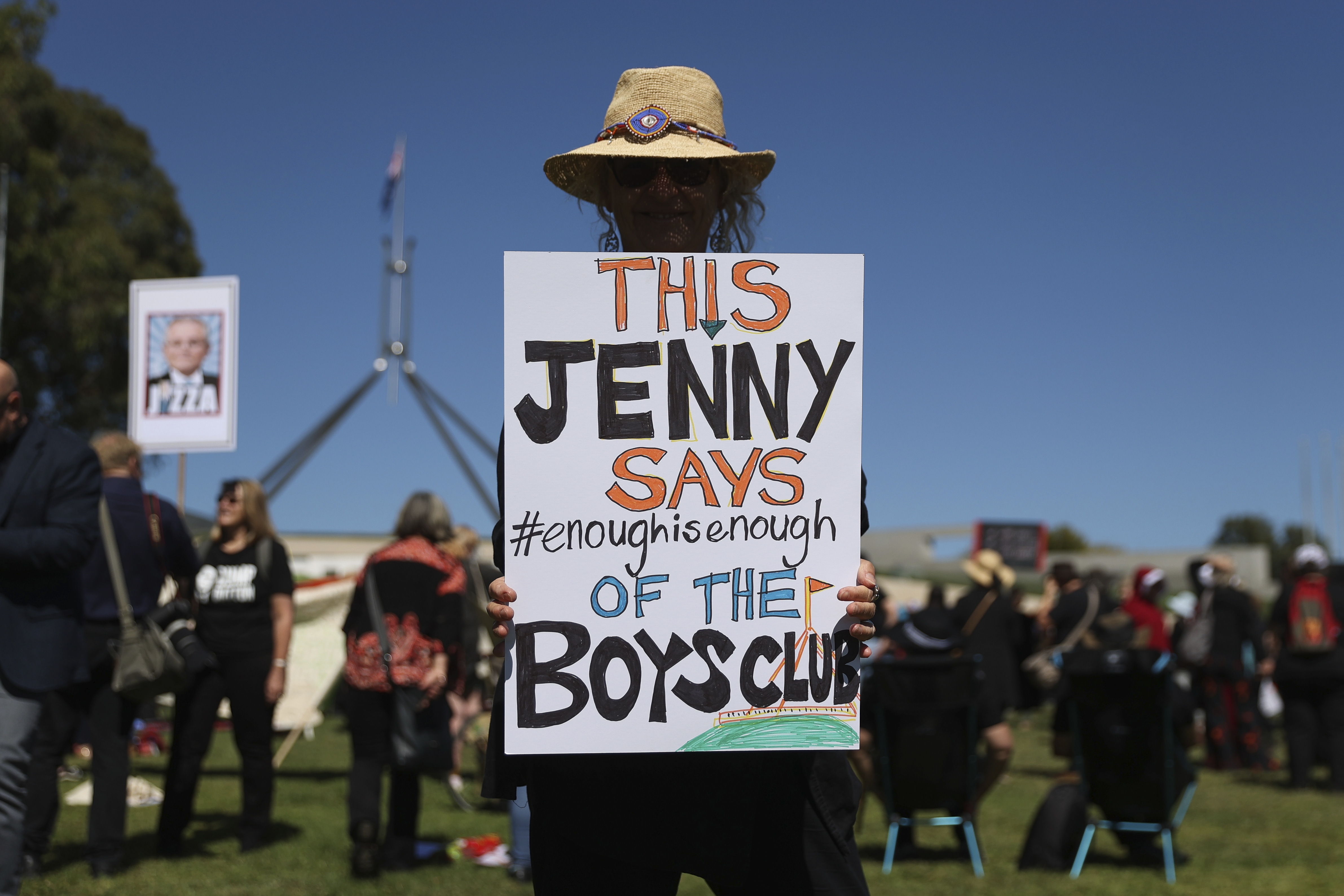 "The allegations of gendered violence in parliament are the part of the same system of abuse and lack of legal and political consequence. 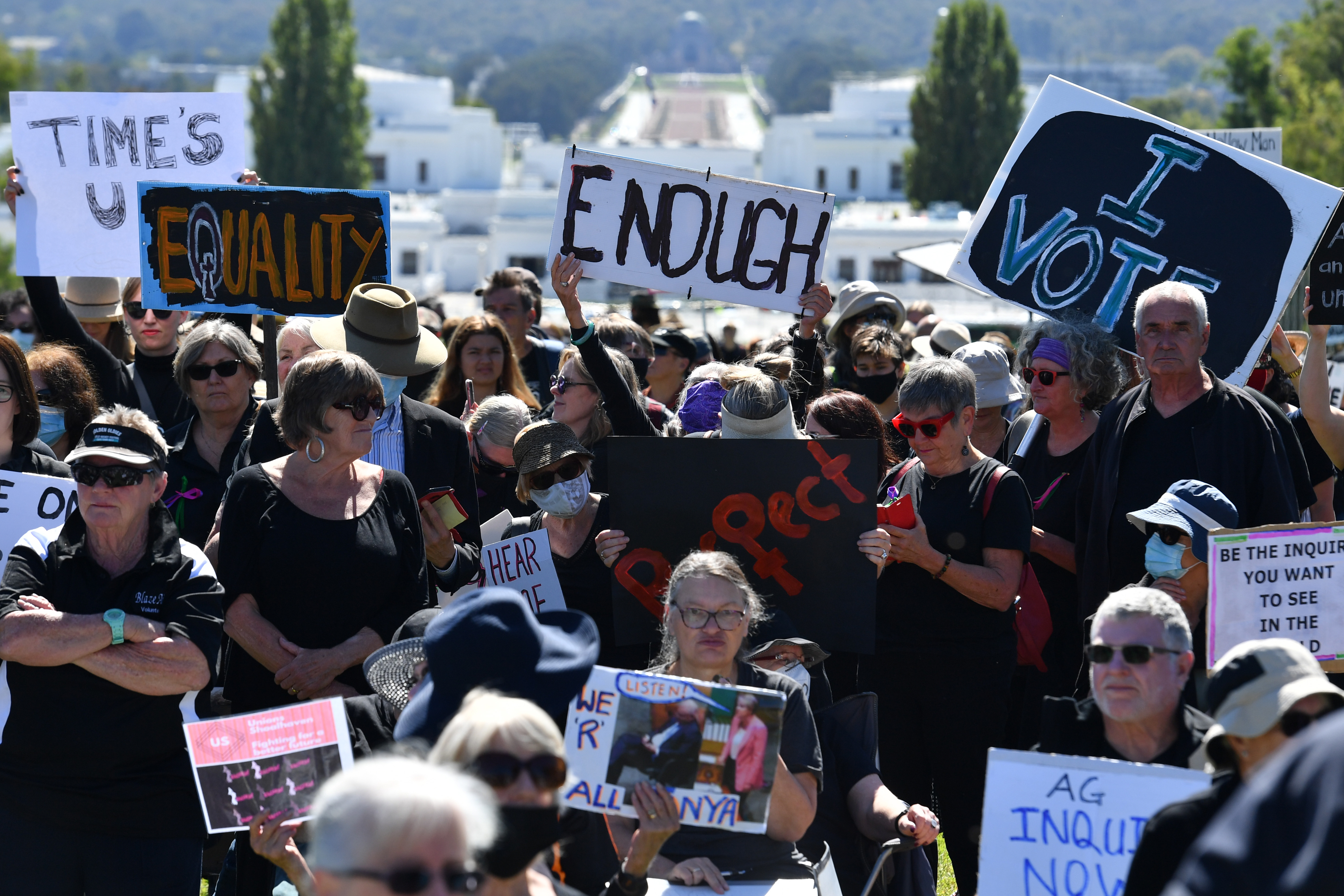 Ms Rizvi was 22 years old when she started working as a staffer at Parliament House and was there for five years.

"It wasn't until years later I realised just how unusual, just how dangerous that experience was," she said.

"As a staffer I was a young woman in a world of older men and for many of those men parliament was their playground.

"Away from their family and friends … Canberra was a place here they worked hard and played harder." 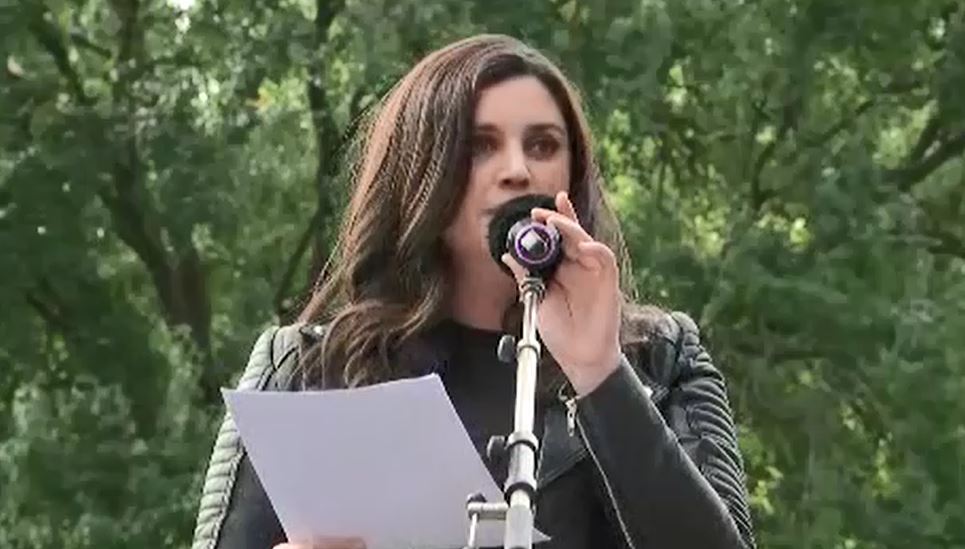 The Future Women Editor-at-Large said she was more fortunate than other women who worked in government.

"I know now of course I was one of the lucky ones. I left that building without having been raped.

"I was spared the indignity, the distress, the trauma and the brutality and the memories that would have gone along with that.

"I was spared the experience alleged by Brittany Higgins.

READ:  Every American adult to be eligible for COVID-19 vaccine by May 1

"Brittany Higgins is someone who in my mind deserves an enormous amount of applause."

A huge demonstration also took place in a beachside Victorian town Torquay, with protesters spelling the word "justice" across the beach.

Prime Minister Scott Morrison says his offer to meet with rally organisers privately was "a good faith action", but he respected their right to refuse.

"If we were to meet, I would advise them of the following of the matters raised in virtue of the petition.

"We all agree that all cases of gendered violence should be referred to the authorities.

"Police are the appropriate independent authority. As terribly difficult as it must be, going to the police and making a statement is the only way to achieve justice and to ensure the perpetrator can no longer harm anyone else." 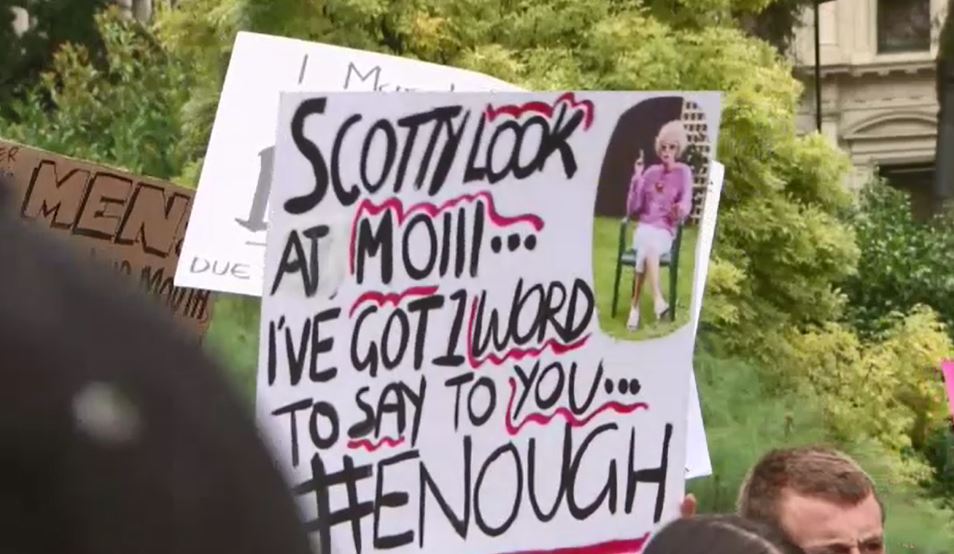 Mr Morrison said it was "good and right" that protesters were able to gather to express their "very genuine and real" frustrations.

"Those who gather here today and around the country do so out of a sense of great frustration and great concern," he said.

"That's deserved frustration and concern that I share and I believe the members of this House share."

Labor Leader Anthony Albanese implored the prime minister to listen to the thousands of women across the country marching for change.

"The prime minister needs to listen. To listen to what women are saying about what is happening in this building, and outside," he said during Question Time.

Thousands gathered at King George Square in Brisbane to rally in the women's justice march as Premier Annastacia Palaszczuk assured cabinet would "absolutely" be showing their support.

"Cabinet will be going down to Parliament House to show our support for a large number of women, I think right across Australia, who support that more needs to be done to allow women's voices to be heard," Ms Palaszczuk said today.

Queensland Attorney-General Shannon Fentiman said she was "frustrated and saddened" by the inaction of Australia's leaders.

"I am in constant awe of the courage and bravery women continue to show in sharing their stories of violence committed against them," she said.

"It's time that we listen to them, believe them and support them. Because respect for women starts at the top. Today we say we are here, take notice. Today we say we want gender equality and violence against women to end.

"Today we stand in solidarity with victims, and survivors and women and #march4justice

"Today we say enough is enough."