Barbecue sauce is usually for grilling, but a Canadian man’s saucy tweet complaining about his employer’s holiday gift of the condiment may have gotten him fired.Hussien Mehaidli, of the British Columbia town of Burnaby, had worked for six …

Barbecue sauce is usually for grilling, but a Canadian man’s saucy tweet complaining about his employer’s holiday gift of the condiment may have gotten him fired.

Hussien Mehaidli, of the British Columbia town of Burnaby, had worked for six years as a general manager for Fastenal, a US-based wholesaler of construction materials that operates across Canada.

But he was fired last month after grumbling on Twitter about his company’s annual holiday gift ― a bottle of barbecue sauce that sells on Amazon for $5.99 and a wooden grill scraper with the Fastenal logo. according to CTVNews.ca.

“We always really appreciated that,” he told CTVNews. He added: “I work really hard. We get pushed really hard to reach our sales goals. I felt I gave this company so much and I felt really disrespected when I was given barbecue sauce as a holiday gift.”

Feeling burned ― and a little fried ― Mehaidli posted his feelings on the anonymous Twitter account he used mainly to follow news and sports. He made a point to tag Fastenal.

“What kind of multi-billion dollar company gifts it’s Canadian employees barbecue sauce as a holiday gift?” he asked in the since-deleted tweet. “Yet the USA employees stuff their face with an actual holiday gift box!” 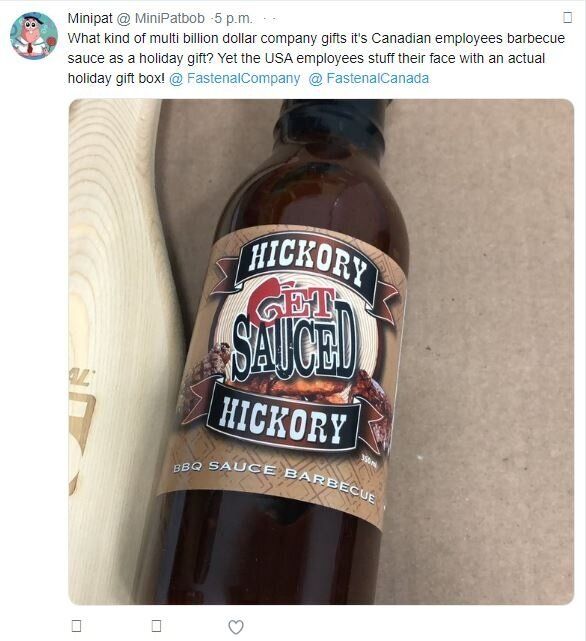 He continued to sizzle.

In another now-deleted tweet, Mehaidli dropped serious shade on a letter from Fastenal’s CEO that came with the sauce, encouraging employees to “share something from the holiday gift box”:

SHARE WHAT ?? !! MY BARBECUE SAUCE ?? To every Canadian Fastenal employee I am sorry we all had to go through this.

He got even more fried when an American colleague confirmed he received the usual bounty of goodies.

A day after the tangy tweets, Mehaidli said he got a call from a boss who told him to delete the tweets, which he had already done. He suspects the company figured out his identity from a photo he’d previously tweeted of himself buying tickets to a WWE event from his workplace computer.

On December 30, 10 days after the tweets, Mehaidli said he was fired for what his manager said was “violation of standards of conduct policy – acceptable conduct section.”

“I am not going to deny it. We did terminate an employee,” Florness said, though he acknowledged the firing may have been “an overreaction.”

“Calmer heads didn’t prevail over this,” Florness said. “Nobody reached out to me to say, ‘Really? I am getting fired over a tweet?’ It’s an incredibly unfortunate event.”

Florness also addressed why Fastenal’s Canadian employees got a $6 bottle of sauce and a grill scraper, while American workers got a junk food feast. In years past, he said, all Fastenal employees received the same holiday gift box, but changing customs regulations made it easier to give a budget to Canadian and Mexican divisions and let them handle the giving.

All of the gifts, regardless of country, were worth $27 each, the CEO said.

Despite his concerns, Florness said Mehaidli isn’t getting his job back.

Mehaidli, though, said he appreciated the CEO’s comments.

“Well, it’s always kind of good to hear someone admit they’re wrong, or somewhat wrong. It definitely could’ve been handled a different way,” he told CTVNews.