Thousands of people have evacuated onto the beach at Mallacoota, as bushfires rage across eastern Victoria.  Pictures of the red apocalyptic sky and falling embers have shocked social media users, as a reported 4000 people continued to shelte… 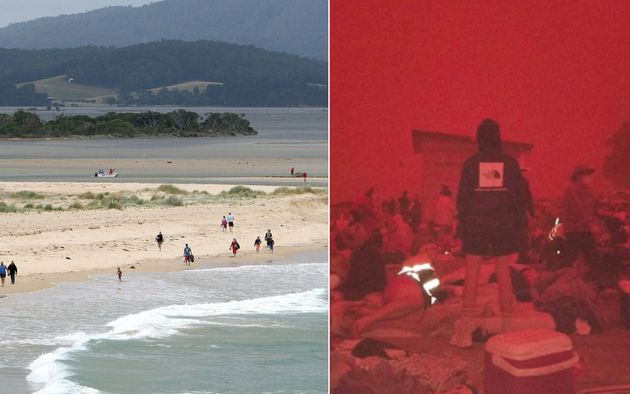 Thousands of people have evacuated onto the beach at Mallacoota, as bushfires rage across eastern Victoria.

Pictures of the red apocalyptic sky and falling embers have shocked social media users, as a reported 4000 people continued to shelter on Mallacoota Beach on Tuesday, ready to escape into the water if the fire approached the town.

Mallacoota is a small tourist coastal town in the East Gippsland region of Victoria and has a population of about 8000 people.

How bad are the #AustralianFires? Absolutey fucked.

Sister in a BRIGHT ORANGE work suit blending in with the #Mallacoota sky pic.twitter.com/SfK93GhbUU

“It was blowing out to a gale for a point and then, what I thought - remember it’s pitch black - and then the sky went red. We thought it was a fire front about to run over the top of us,” he said.

“So we were ready to jump in. And everyone was all along the edge, ready to go and of course when, you know, when that sky went red, it looked like what we’ve been looking at when we saw the fire coming.

#Mallacoota is turning pinkish red. Still no flames visible from where I am but plenty of hot embers and the roar is undeniable. VicEmergency notifications are going wild. pic.twitter.com/ang6eTWz8B

This picture just in from family boarding boat in #Mallacoota#MallacootaFires approx time of photo 9:45am pic.twitter.com/WJEQScDp9f

Around 100 fires are burning across Australia, with as many as 14 “emergency” warnings in place for Victoria while fires are also threatening homes and infrastructure in South Australia and Tasmania.

The NSW volunteer firefighter who died in a “cyclonic wind” fire event on Monday has been named as 28-year-old newlywed Sam McPaul.

RFS Commissioner Shane Fitzsimmons described McPaul as “a much loved and respected local firefighter” who leaves behind a wife who is pregnant with their first child.

“He leaves behind, tragically, a beautiful wife - Megan - who is pregnant with their first child, that’s due on 4 May,” Fitzsimmons told media at a conference on Tuesday.