Jonah Hill posted an emotional tribute Thursday to his late brother Jordan Feldstein and Kobe Bryant﻿ after the basketball legend was killed in a helicopter crash alongside his 13-year-old daughter Gianna and seven others on Sunday.

Feldstein, the longtime manager of the pop band Maroon 5, died in 2017 at age 40 from an apparent heart attack. Hill remembered a night in 2010 he spent with his brother, sitting courtside at a Los Angeles Lakers game, and meeting Bryant.

Hill said he initially hesitated to post the tribute, because it contained an element of humor ― a silly picture he took with a straight face while sitting next to Bryant at the game.

“I’m sitting next to my brother and he’s taking this. It was the night we both met Kobe and he was so nice to us,” Hill wrote in a caption accompanying the two photos on Instagram. “So funny, so amazing and so kind (in the middle of a game!). My brother and I grew up worshiping the Lakers and because of my job we got to sit next to Kobe and the whole team!” 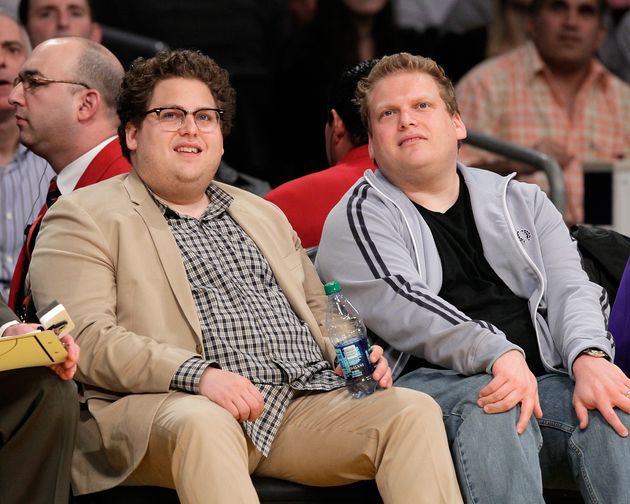 Hill said that he and his brother were “literally buzzing with excitement” over meeting Bryant and that it’s his “favorite memory with my brother.”

“I’m sitting between Kobe and my brother and now they’re both gone. I have been staring at this photo for days in disbelief and sadness and joy,” the actor wrote. “It’s my favorite picture and I think it represents for me, all of the hard and amazing things in life and how fleeting they are.”

I’ve been thinking a lot about saying Rest In Peace and what that means. But I don’t think Kobe or my brother are resting. I think they’re hustling up there. Working hard and getting shit done. Cuz that’s what they do. All my love to the ones here left behind. Take care of each other and love each other. That’s the lesson I’ve learned.

Feldstein was married twice and left behind two children, his parents, his brother, and his sister, actor Beanie Feldstein. Bryant, who was married to wife Vanessa for more than 18 years, was also father to Natalia, Bianka and Capri.

After Bryant’s death, friends, former teammates and fans around the world paid tribute to the basketball legend. Shaquille O’Neal, who won three NBA championships with Bryant, announced that he was making a major life change.

Bryant and O’Neal famously had a longstanding feud while playing together on the Lakers during the late ’90s and early ’00s. They eventually brokered peace on an episode of O’Neal’s podcast in 2015.

“Look, I’m all about being hard and all that, but after yesterday, I’m going to have to delete my beef and my confrontation clause,” O’Neal said Monday on his podcast, “The Big Podcast with Shaq.”﻿ “I don’t want to do that anymore because, you know, you never know.”