Former Vice President Joe Biden on Monday delivered remarks from his home in Delaware in an effort to reignite his presidential campaign during the coronavirus outbreak, and he blasted President Donald Trump for being slow to respond to the health cris…

Former Vice President Joe Biden on Monday delivered remarks from his home in Delaware in an effort to reignite his presidential campaign during the coronavirus outbreak, and he blasted President Donald Trump for being slow to respond to the health crisis.

“The president says no one saw this coming. Well, that’s just not accurate,” Biden said. “The mindset that was slow to recognise the problem in the first place ... is still too much of how the president is addressing the problem.”

The address was the first of what the former vice president said will be regular briefings on the coronavirus outbreak, an effort to offer some counterprogramming to Trump’s daily press briefings.

Biden called on Trump to activate the authority of the Defence Production Act, which would mandate that private companies produce medical and safety equipment like ventilators and masks. He also called out the president for not taking the crisis seriously in January, when the first case of coronavirus was detected in the United States.

“Trump keeps saying he is a wartime president — well, start to act like one,” Biden said. “Donald Trump is not to blame for the coronavirus but he does bear responsibility for our response.” 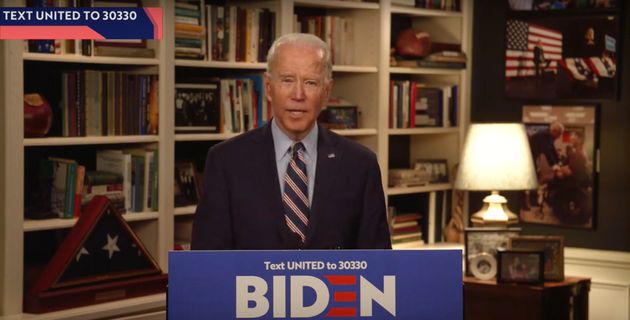 Republicans included a proposal to give $500 billion to the Treasury Department, which it could loan to companies ― from airlines to the energy industry ― hit hard by the crisis. The proposal does not require companies to keep employees on payroll, and it would give Treasury Secretary Steve Mnuchin broad discretion to hand out the money.

“President Trump and Mitch McConnell are trying to put a corporate bailout ahead of millions of families,” Biden said of negotiations in the Senate, calling the bailout package a “slush fund for corporations.”

The country’s “guiding principle” should be “to keep everyone paid through this,” Biden said.

Biden’s remarks come as both his supporters and his detractors have been raising concerns about his inability to campaign in person during the pandemic. Both Biden and Sen. Bernie Sanders (I-Vt.) have canceled all public campaign events.

“I would just love to see you more,” one donor told Biden during a telefundraiser held over the weekend. “Like, how do we get more of you and less of [Trump] on our airwaves?”

Biden has since converted a recreation room in his home into a studio for live broadcasts.

A HuffPost Guide to Coronavirus