Jennifer Lopez called out President Donald Trump with a new video montage filmed “moments” before she took to the stage for her 2020 Super Bowl halftime show alongside Shakira in Miami on Sunday.“All I want my girls, the lit…

Jennifer Lopez called out President Donald Trump with a new video montage filmed “moments” before she took to the stage for her 2020 Super Bowl halftime show alongside Shakira in Miami on Sunday.

“All I want my girls, the little girls on stage with me and all over the world to know is how to use their voices and be proud of everything they are,” Lopez captioned footage she shared on social media late Monday showing her warming up and giving encouragement to her fellow halftime performers.

“Other people can try to build walls, keep us out or put us in cages,” she wrote, a direct reference to Trump’s policies of building a wall on the U.S.-Mexico border, separating migrant children from their families and attempts to limit immigration.

“We are proud to recognize that all of us together are what makes this beautiful country truly great,” Lopez concluded.

Check out the video here:

The Super Bowl halftime show featured Lopez’s 11-year-old daughter, Emme, performing part of her mom’s hit “Let’s Get Loud” with children who appeared to be in cages:

Lopez sang a line from Bruce Springsteen’s 1984 hit “Born In The USA” while draped in the Puerto Rican flag:

The moment before a great and powerful #SuperBowlHalftimeShow2020#LetsGetLoud#JLohttps://t.co/qBBLNqQIph

Lopez also revealed her inspiration for her stage entrance on a pole “was to represent women being on top of the world” with this tongue-in-cheek Instagram story: 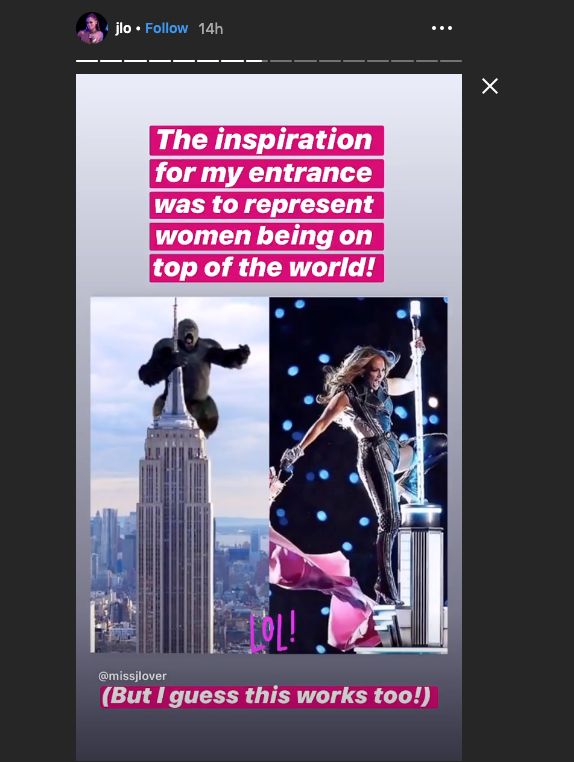 Before the Super Bowl, which saw the Kansas City Chiefs defeat the San Francisco 49ers, Lopez said she hoped her show would “spread a little bit of love and positivity, and make people know that we’re all in this together.”