Jennifer Lopez left it all on the floor of the 2020 Super Bowl halftime show in Miami, Florida, on Sunday alongside Shakira ― the first time two Latina women have ever headlined at the big game.Riding high off the critical acclaim for “… 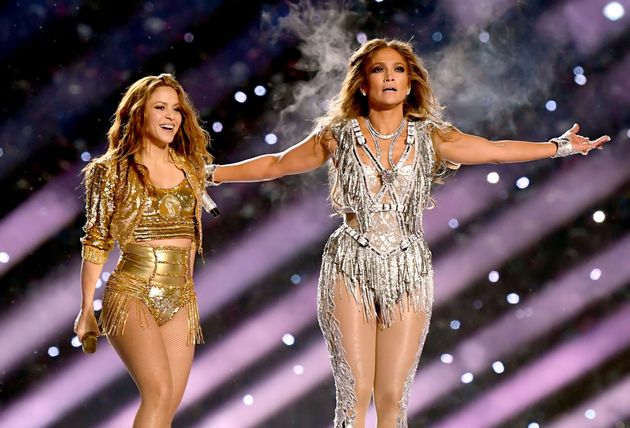 Jennifer Lopez left it all on the floor of the 2020 Super Bowl halftime show in Miami, Florida, on Sunday alongside Shakira ― the first time two Latina women have ever headlined at the big game.

Riding high off the critical acclaim for “Hustlers” and the fan outcry over her egregious Oscars snub, Lopez, who is of Puerto Rican descent, said the event would be a “perfect moment” in her life and that it was a “great time for a Latina women to take the stage ... with everything that’s going on in the country right now.”

Shakira, a three-time Grammy-winning Colombian artist, and her world famous hips kicked off the performance with a fiery rendition of “She Wolf” alongside a group of backup dancers in eye-catching red outfits. She then launched into a rock-heavy rendition of her song “Empire” before bringing out Puerto Rican Latin trap singer Bad Bunny for a take on “I Like It.”

SOON: Fans can relive their favorite moments from the #PepsiHalftime show HERE https://t.co/TegS1TZFKypic.twitter.com/yJ1xXI9Ty7

Then Lopez took the stage at the Hard Rock stadium for six-minute set, starting her time on the stage hanging from a stripper pole, perhaps referencing her recent “Hustlers” role. Dazzling in a studded leather number, Lopez performed hits, including “Jenny From The Block,” “Ain’t It Funny” and “Get Right,” from her 21-year music career.

The singer then reappeared on a pole in the middle of the stage flanked by harness-clad backup dancers for a new twist on “Waiting For Tonight” before serving up a “Love Don’t Cost A Thing” and “Mi Gene” mash-up alongside J Balvin.

SOON: Fans can relive their favorite moments from the #PepsiHalftime show HERE https://t.co/TegS1TZFKypic.twitter.com/uRYHn6d6Qa

Lopez’s 11-year-old daughter, Emme, who has accompanied her on tour in recent months, even joined her mom on stage for part of the performance to sing “Let’s Get Loud.”

The halftime show ended with Lopez and Shakira laying waste to the stage together with a full-out dance number in front of the Puerto Rican flag. The two swung their hips to match the final beats of the song before fireworks shot into the sky.

That was incredible, @jlo + @shakira! 👏 #PepsiHalftime#SBLIV

SOON: Fans can relive their favorite moments from the #PepsiHalftime show HERE https://t.co/TegS1TZFKypic.twitter.com/1HkRu99cRR

The Super Bowl halftime show has been subject to criticism in recent years. Artists like Rihanna and Cardi B have declined to perform in order to show solidarity with Colin Kaepernick, who has has faced major criticism from the NFL and the Trump administration for kneeling during the national anthem to protest police brutality and racial inequality.

Lopez said at a news conference ahead of the game that she hoped this year’s performance would “spread a little bit of love and positivity, and make people know that we’re all in this together.”

Shakira added, “It’s also going to be a reminder of the heritage of this country, which is one of diversity and that’s what we will be celebrating Sunday.”

Demi Lovato, another Latina performer, sang the national anthem at the big game before the San Francisco 49ers faced off against the Kansas City Chiefs.

READ:  Coronavirus: Indonesia could be headed for disaster

While only 0.5% of NFL players are Latino or of Latino descent, the league is making efforts to expand its already growing Latino fanbase ― 28.7 million Hispanic-Americans count themselves fans of the league, according to an ESPN poll. The NFL’s cultural marketing strategist, Javier Farfán, also noted that the NFL has surpassed other major sports leagues, including the NBA, the MLB and international soccer, in attracting new Latino fans.