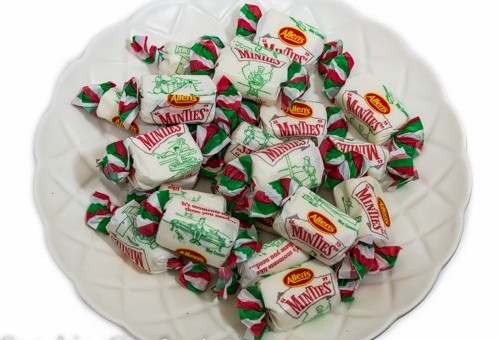 This mint story has done the rounds, and the usual people who howl about how terrible it is when elected officials are held to account have done their howling. The beatup, notably by some southern Tasmanian media and even Senator Eric Abetz, was that the Huon Valley Council Code of Conduct hearing was about mints […]

This mint story has done the rounds, and the usual people who howl about how terrible it is when elected officials are held to account have done their howling.

The beatup, notably by some southern Tasmanian media and even Senator Eric Abetz, was that the Huon Valley Council Code of Conduct hearing was about mints and therefore a disgraceful waste of time and money.

It was not about mints.

As Geoffrey Swan will recount below, the heart of the issue is the integrity of local government and its mechanisms of accountability, which include the Code of Conduct process.

Kingborough Mayor Dean Winter weighed in with some comments about deficiencies in the Code of Conduct process and was quoted in other media as saying the process needed to be overhauled.

We therefore put some questions to Winter:

But Winter is not coming: despite an iron-clad guarantee to publish his answers unedited, he ‘declined to contribute’.

Tasmanian Times remains curious about why the cost of the process is supposedly important, as conveyed in the ‘cost a mint’ jibe. Councils have all kinds of expenses in running their operations, and this is one of them. It’s in effect no different to paying for electricity to a council office or any other line item in a long budget, except that in this case it’s a cost of complying with the requirements of the legal framework under which Tasmanian councils operate.

The Code of Conduct panel acknowledged as much in the judgement:
The Panel noted that the matter of whether or not mints are distributed at Huon Valley Council meetings is in itself trivial; but based its investigation on deciding whether or not sufficient evidence was provided to show that Cr Wilson had lied about this practice under oath. The Panel considered that if Cr Wilson did lie under oath as alleged by the complainant, Cr Wilson might have breached Parts 2(2), 3(1) and 8(7) of the Code.

The Code is set down by the Local Government Act. The Model Code of Conduct (as it is formally known) was amended in December 2018 following a review of its operation during the first 12 months since it commenced in 2016. The review was jointly conducted by the state government and the local government sector. A number of changes have been made to the  Code to improve its operation and councils were required to adopt the revised Model Code of Conduct by 26 March 2019.

It should be noted as well that while the relevant council is responsible for payment of the costs of the Panel and Executive Officer in relation to the complaint, the complainant and respondent councillor pay their own costs. Considering the process and the costs, the time involved and so on, it is unlikely to be a fountain of vexatious complaints. Tasmanian Times has not received any evidence that it has.

So what mints story really boils down to is that a councillor with a track record of bad behaviour, and who has now been suspended for six weeks for his part in a hate campaign against Geoffrey Swan, was upset about his ‘star witness’ being held to account.

For perspective on the issue, you can’t go past the actual Code of Conduct Determination Report.

Geoffrey Swan’s version of how the whole thing unfolded is below. Our disclosure is that he is a Contributing Editor to Tasmanian Times. Given that The Mercury refused no less than four times to publish his clarification about his part in the events and the substance of the matter, we believe he deserves a hearing. – Chief Editor

“I solemnly declare and affirm that the evidence I shall give will be the truth, the whole truth, and nothing but the truth”,  said Councillor Mike Wilson with his hand firmly placed on the King George edition of the Bible at a Code of Conduct hearing on 15 August 2019.

Wilson was appearing at a Code of Conduct Panel hearing as a witness to a complaint against Cr Michael Newell. One of the two alleged complaints being determined on that day was that Cr Newell made disparaging remarks about feeding peanuts to people sitting in the public gallery prior to a Council meeting held on 6 February 2019. 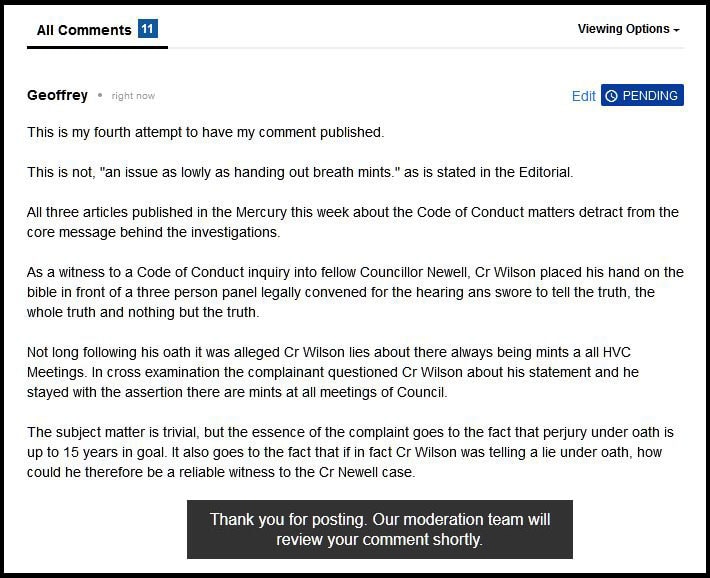 During his witness statement, for some unknown reason, Wilson made mention of mints ‘always being available’ at the Ordinary Meetings of the Huon Valley Council, and so the story unfolds.

The truth behind what actually occurred on that day is outlined below.

Meanwhile, Newscorp’s daily newspaper The Mercury and others have jumped on the bandwagon, each loving a good headline, but not it seems there isn’t any interest in the facts. As many might say “Don’t let a good headline get in the way of the truth.”

I made attempts over the ensuing 36 hours to provide an online comment to correct the Opinion piece published by Mercury Editor, Jenna Cairney, 26 June 2020. On contacting Cairney as to why four attempts to post an online comment were dismissed, she explained:

“The moderators make judgement calls so as to protect the website from anything they deem to be a potential legal risk.”

I was a bushfire evacuee and could not attend the 6 February 2019 meeting of Council; however I was that very night as well as later that week contacted by a number of upset members of the community about Cr Newell’s disparaging comments inferring members of the public are ‘monkeys’. Given I was about to submit a Code of Conduct complaint about other offensive comments and behaviours attributed to Newell, this derogatory comment was then included into his submission. This meant statutory declarations were required.

Dr Liz Smith, a former HVC Councillor of 14 years and long-time attendee of HVC meetings, was at the February meeting. She did witness the offensive remarks made by Cr Newell. When contacted 27 June 2019 she replied:

“I can do a statutory declaration because I heard Cr Newell make a comment, when Sandy Rustell [Executive Assistant, HVC] was handing Minties to the few people in the gallery, to the effect that she “should be giving them peanuts.” I inferred from the words and the tone of his comment that he considered that the members of the public in the gallery to be ‘monkeys’ and I found the comment to be offensive.”

The Panel hearing was scheduled for 25 July 2019. Cr Wilson offered himself as a last-minute witness for Newell, and on 18 July 2019 provided a statutory declaration to the effect that Wilson at the meeting had a handful of mints that had been passed around by Ms Rustell, and Newell said to Wilson, “Mate, they are not peanuts.”

The Panel hearing was moved to 15 August 2019, and regrettably on day Dr Smith missed the hearing. As a result the Panel were forced to accept the evidence provided by Wilson and the matter of derogatory peanuts comments was subsequently dismissed; the second matter was upheld.

“The Panel determined at the conclusion of the complaint process that Cr Newell had not accepted that the onus is on an elected member to refrain from engaging in negative public commentary about one of the Council’s constituents.”

Newell was sanctioned with a caution for his 2019 offence, being the most minor of sanctions available to the Panel, and being his first offence as a Councillor.

As witness to Newell, Wilson advised the Panel that “Mints are always handed out before HVC meetings”. This was a peculiar comment since it appeared to have no relevance to the complaint under investigation. Given the opportunity to cross examine Wilson, I sought clarification of this statement.

Would you take a mint from these men? Councillors Newell and Wilson.

Wilson however remained emphatic that mints are always handed out at all HVC Ordinary meetings.

I then advised Wilson that I had been attending meetings for some 5 years and had never seen mints handed out, to which Wilson responded: “you must always arrive late [for the meetings].”

I then gave Wilson the opportunity to retract his statement and admit that he had erred on this occasion. Wilson remained steadfast to his lie under oath.

Because a lie under oath amounts to perjury in a court of law with up to 15 years in gaol, this was not an insignificant matter. Whilst the subject of mints in itself was not of great import, something I even stated in my submission, it raised serious doubts about Wilson being a credible witness to Newell.

Did he also fabricate the story about the mints to support his mate and fellow Councillor Newell?

I lodged a Code of Conduct complaint against Wilson on 7 February 2020 which alleged Wilson had perjured himself under oath before a legally-constituted Panel. In so doing, I discovered there is no such breach under the Code of Conduct for ‘telling a lie’, with the closest offence being:

PART 2 – CONFLICT OF INTERESTS THAT ARE NOT PECUNIARY
A Councillor must act openly and honestly in the public interest.

PART 3 – USE OF OFFICE
The actions of a Councillor must not bring the Council or the office of Councillor into disrepute.

PART 8 – Representation
The personal conduct of a Councillor must not reflect, or have the potential to reflect,adversely on the reputation of the Council.

I also discovered that another Chair and/or Panel are not able to listen to the recording of a previous Panel hearing, therefore everyone had to rely on the memory of witnesses of what was actually said during the Newell hearing back in August 2019. I was however very clear in my mind having taken notes during the hearing.

I provided three statutory declarations from members of the community who had regularly attended HVC meetings over the past 10, 11 and 20 years; all of whom stated under oath to have never seen mints, Minties or sweets of any kind, ever handed out at meetings of Council to either staff, Councillors or indeed members of the gallery; apart from the one and only occasion during the February 2019 bushfires.

Dr Liz Smith was a Councillor with the HVC from 2002 until the Council dismissal in 2016 and said in part:

“In my experience over all that time, the meeting of 6 February 2019 was the only occasion on which mints or other sweets have been handed round the gallery and they had not to my knowledge ever been passed around the councillors or staff during the time I have been attending council meetings [some 18 years].”

“The offer of mints was exceptional and appeared to be a gesture of goodwill to those who had come to the meeting despite the bushfire emergency,” said Smith.

Wilson provided yet another last minute statutory declaration 27 April 2020 from the HVC General Manager, Emilio Reale before the hearing of the Panel 4 May 2020.

The GM’s statements about mints being available at the meetings, being handed around and even shared in the gallery, differed substantially to my testimony and to the three under-oath witness statements that concurred with me.

The Panel asked Wilson and I if we agreed the Panel could determine the outcome based on evidence alone, and not in this instance require a Panel hearing. Both parties agreed.

I advised the Panel that a hearing was not necessary as the matter should be “cut and dried, with no possible misinterpretation of the facts.”

The Panel determined in favour of Wilson.