As racism hits Australia following the coronavirus outbreak, a Sydney cafe has apologised after it displayed an offensive sign that sparked a wave of backlash on social media. Casanova by Cucina 105 in Liverpool, in Sydney’s south-west, had …

As racism hits Australia following the coronavirus outbreak, a Sydney cafe has apologised after it displayed an offensive sign that sparked a wave of backlash on social media.

Casanova by Cucina 105 in Liverpool, in Sydney’s south-west, had a message written across its front display board on Friday that read, “The coronavirus won’t last long because it was made in China!!!”

Several Facebook users initially mistook the cafe for being called ‘Cascade’ due to a coffee sign, however HuffPost Australia has verified the eatery is Casanova by Cucina 105 in Liverpool, approximately 45 minutes from Sydney’s CBD.

“One of my staff members has done this without consent,” the cafe’s owner told HuffPost Australia on Saturday. 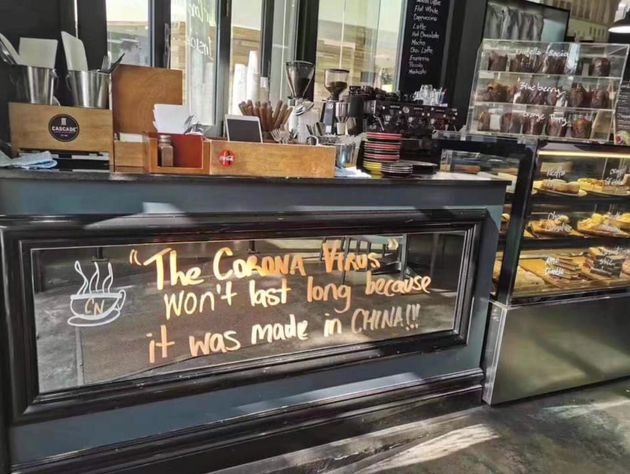 In a provided statement, the cafe’s management said: “To Everyone, Casanova Café give our sincerest apology for the quote that was posted in our quote board on the 31 January.

“It was not our intention to offend anyone, it was a gross misjudgement on our part , and we understand that it was insensitive and we sincerely apologise. The proprietor was not aware of the contents and was not at the premises on the day due to other family commitments.

The statement explained that “the sign was immediately taken down and the individual who authored the quote has been reprimanded and disciplined”.

“The proprietor was gutted, very shocked and upset when he was informed of the contents of the quote board, particularly as he is of a migrant ethnic background, and employs Asian staff.

“We at Casanova Café stress that we unequivocally reject any form of racism, it should be noted that our business operates in one of the most multicultural areas of Australia and once again sincerely apologise for the offence that we have created especially to the Chinese community Casanova Cafe.”

Various social media posts about the sign mentioned “racism is not witty”, and questioned what “humour” people of Chinese heritage would actually perceive from the message.

The Asian Australian Alliance is an organisation with over 900 members that promotes advocacy on social issues faced by Asian-Australians. Its founder Erin Chew said she was “sad” to see the message that was shared with her on Facebook.

“Most people such as the cafe feel that this is just a joke but they don’t understand the racial backlash which impacts on anyone who is Chinese looking.

“The focus should be keeping safe and to hope that the coronavirus gets contained as soon as possible but sadly what we have seen is people trying to make this out to be a ‘Chinese virus’ and anyone who looks like us who wears a face mask or coughs or sneezes will get implicated and get racially targeted.”

There are now 10 confirmed cases of coronavirus in Australia ― two in Queensland, four in NSW and four in Victoria.

The majority of cases, which have resulted in at least 170 deaths, have been in China where health officials say the virus originated. Additional cases have been reported in 18 other countries, including the US, France, Canada, Japan, South Korea, Thailand, India and Australia.

Two more Australian citizens, who are in China, have been confirmed to have the virus.

Governments around the world – including Australia – are scrambling to both prevent the disease spreading and to repatriate their citizens currently stranded in the Chinese city at the epicentre of the outbreak.

Australian Prime Minister Scott Morrison said Wednesday that plans to evacuate Australians who are in Hubei province were advancing with “vulnerable Australians” to be held on Christmas Island for 14 days.

“We have taken a decision this morning to prepare a plan for an operation to provide some assisted departures for isolated and vulnerable Australians in Wuhan and the Hubei province,” Morrison told reporters on at a press conference in Canberra.