A high-rise building in Gaza City that housed offices for The Associated Press, Al-Jazeera and other media was destroyed about an hour after an evacuation order.

An Israeli airstrike on Saturday targeted and destroyed a high-rise building in Gaza City that housed offices of The Associated Press and other media outlets.

AP's president said the agency was "shocked and horrified" at the strike.

Twelve AP staffers and freelancers were working and resting in the bureau on Saturday afternoon when the Israeli military telephoned a warning, giving occupants of the building one hour to evacuate.

Everyone was able to get out, grabbing a few belongings, before three heavy missiles struck the 12-story building, collapsing it into a giant cloud of dust. 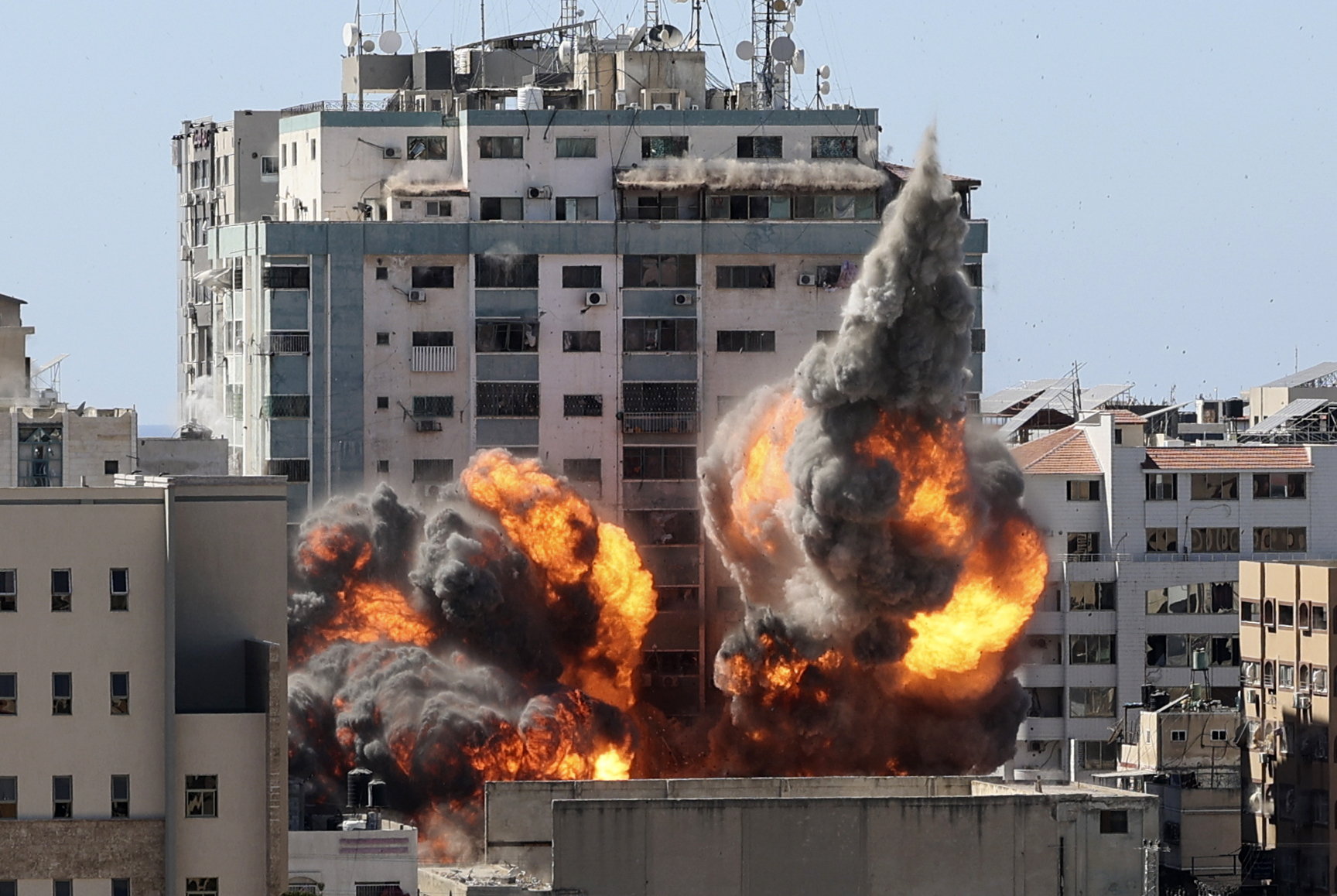 The Israeli military said the home of Khalil al-Hayeh served as part of what it said was the militant group's "terrorist infrastructure."

Al-Hayeh is a senior figure in the Hamas political leadership in Gaza, and the attack marked a further escalation, signalling that Israel is going after Hamas' top leadership, and not just military commanders.

His fate after the strike was not immediately known.

Although no one was hurt, the airstrike demolished an office that was like a second home for AP journalists and marked a new chapter in the already rocky relationship between the Israeli military and the international media.

Press-freedom groups condemned the attack. They accused the military, which claimed the building housed Hamas military intelligence, of trying to censor coverage of Israel's relentless offensive against Hamas militants.

For 15 years, the AP's top-floor office and roof terrace were a prime location for covering Israel's conflicts with Gaza's Hamas rulers, including wars in 2009 and 2014. The news agency's camera offered 24-hour live shots as militants' rockets arched toward Israel and Israeli airstrikes hammered the city and its surrounding area this week. 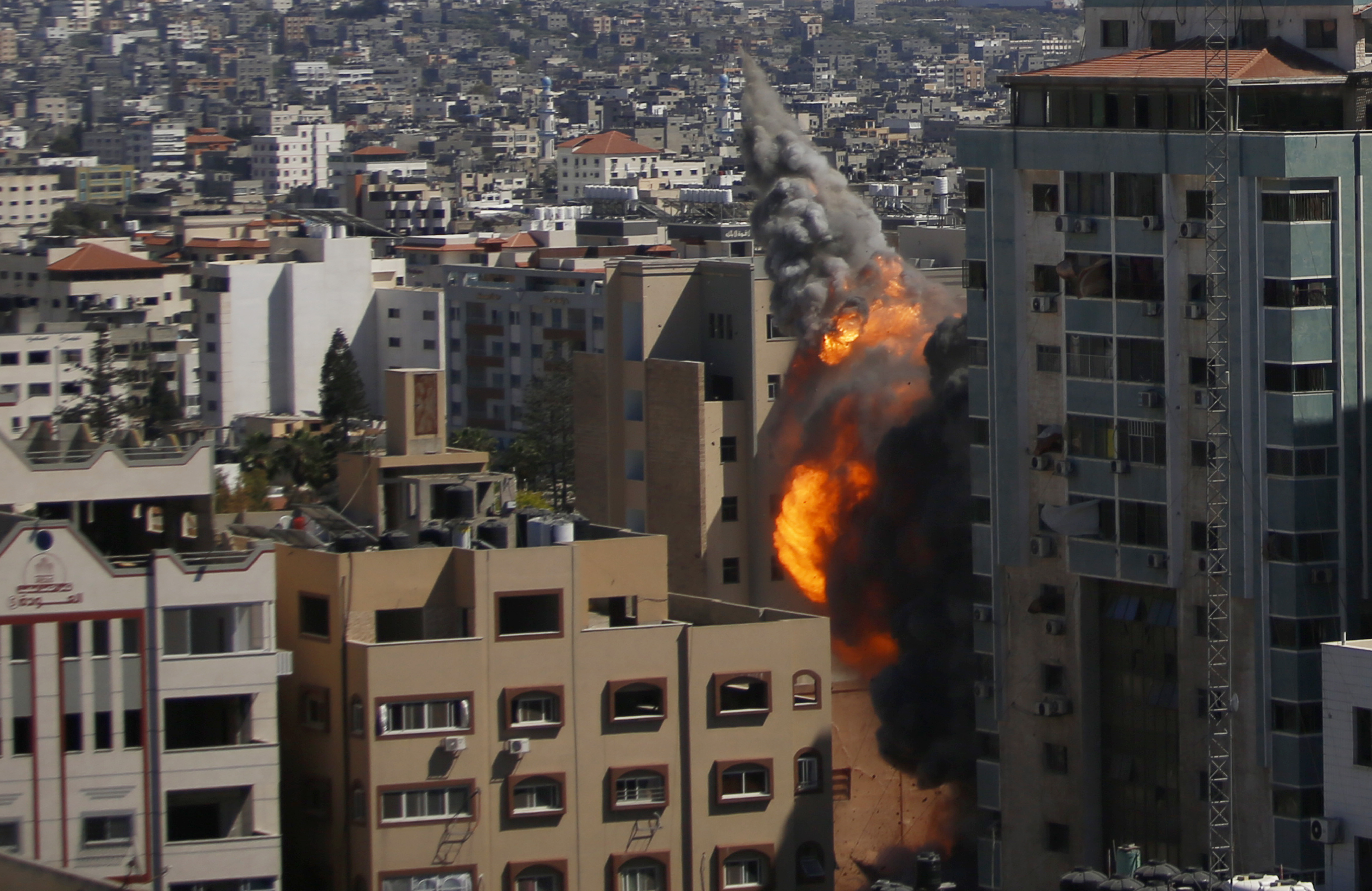 "The world will know less about what is happening in Gaza because of what happened today," AP President and CEO Gary Pruitt said in a statement. "We are shocked and horrified that the Israeli military would target and destroy the building housing AP's bureau and other news organisations in Gaza."

"This is an incredibly disturbing development. We narrowly avoided a terrible loss of life," he said, adding that the AP was seeking information from the Israeli government and was engaged with the US State Department to learn more.

Meanwhile, the White House said following the attacks that the safety of reporters covering the Gaza conflict "is a paramount responsibility".

The building also housed the offices of Qatari-run Al-Jazeera TV, as well as residential apartments. The Israeli military said it targeted the building because it contained assets of Hamas intelligence agencies, which it said were using media offices as "human shields." It did not provide evidence for the claims. 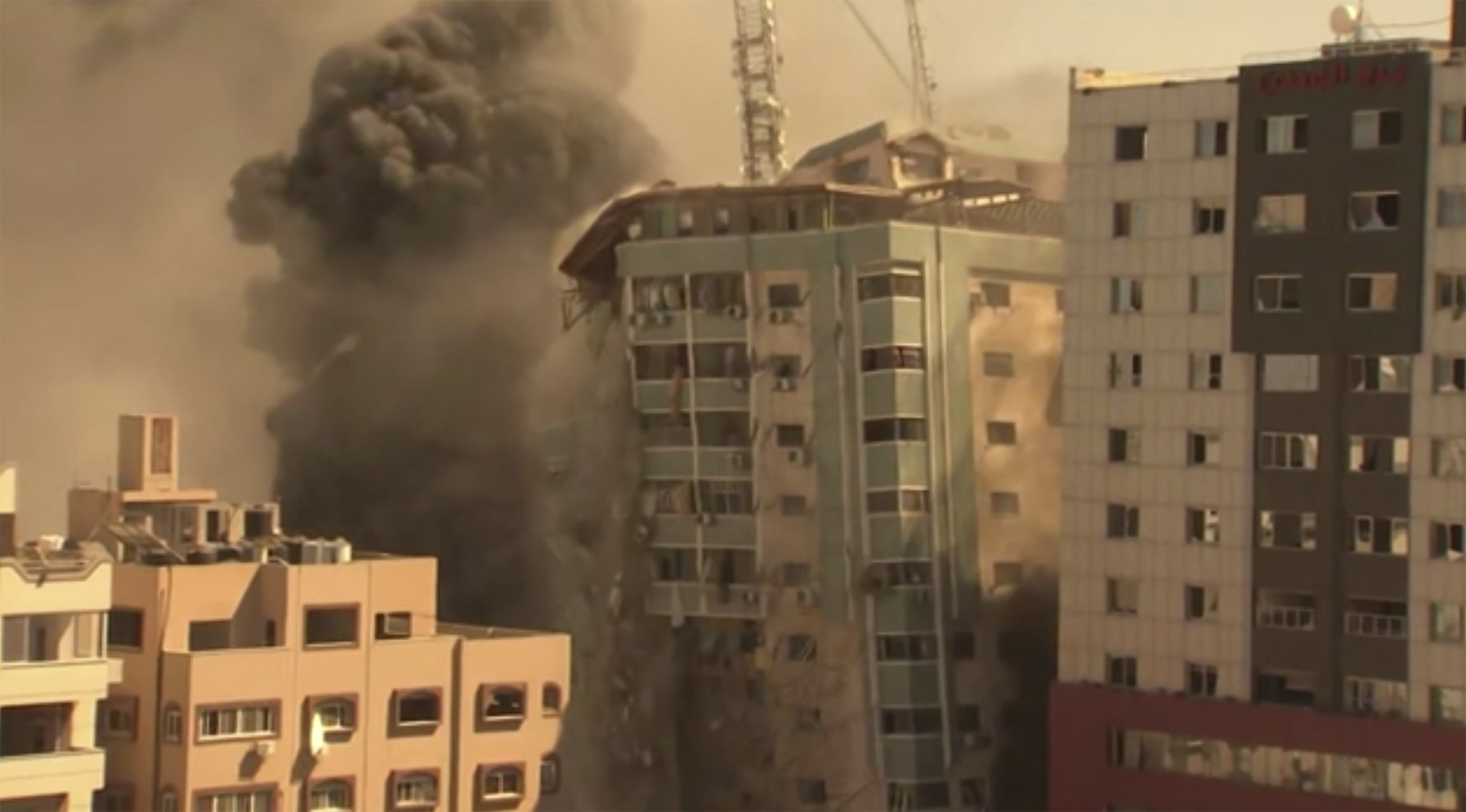 Hours earlier, another Israeli air raid on a densely populated refugee camp killed at least 10 Palestinians from an extended family, mostly children, the deadliest single strike of the current conflict.

READ:  Potato Threatens To Sue For Defamation After ‘Insulting’ Comparisons To Peter Dutton

The New York-based Committee to Protect Journalists demanded Israel "provide a detailed and documented justification" for the strike.

"This latest attack on a building long known by Israel to house international media raises the spectre that the Israel Defense Forces is deliberately targeting media facilities in order to disrupt coverage of the human suffering in Gaza," the group's executive director, Joel Simon, said in a statement.

The strike on the building housing media offices came in the afternoon, after the owner received a call from the Israeli military warning that the building would be hit within the hour.

A video broadcast by Al-Jazeera showed the building's owner, Jawwad Mahdi, pleading over the phone with an Israeli intelligence officer to wait 10 minutes to allow journalists to go inside the building to retrieve valuable equipment before it is bombed. 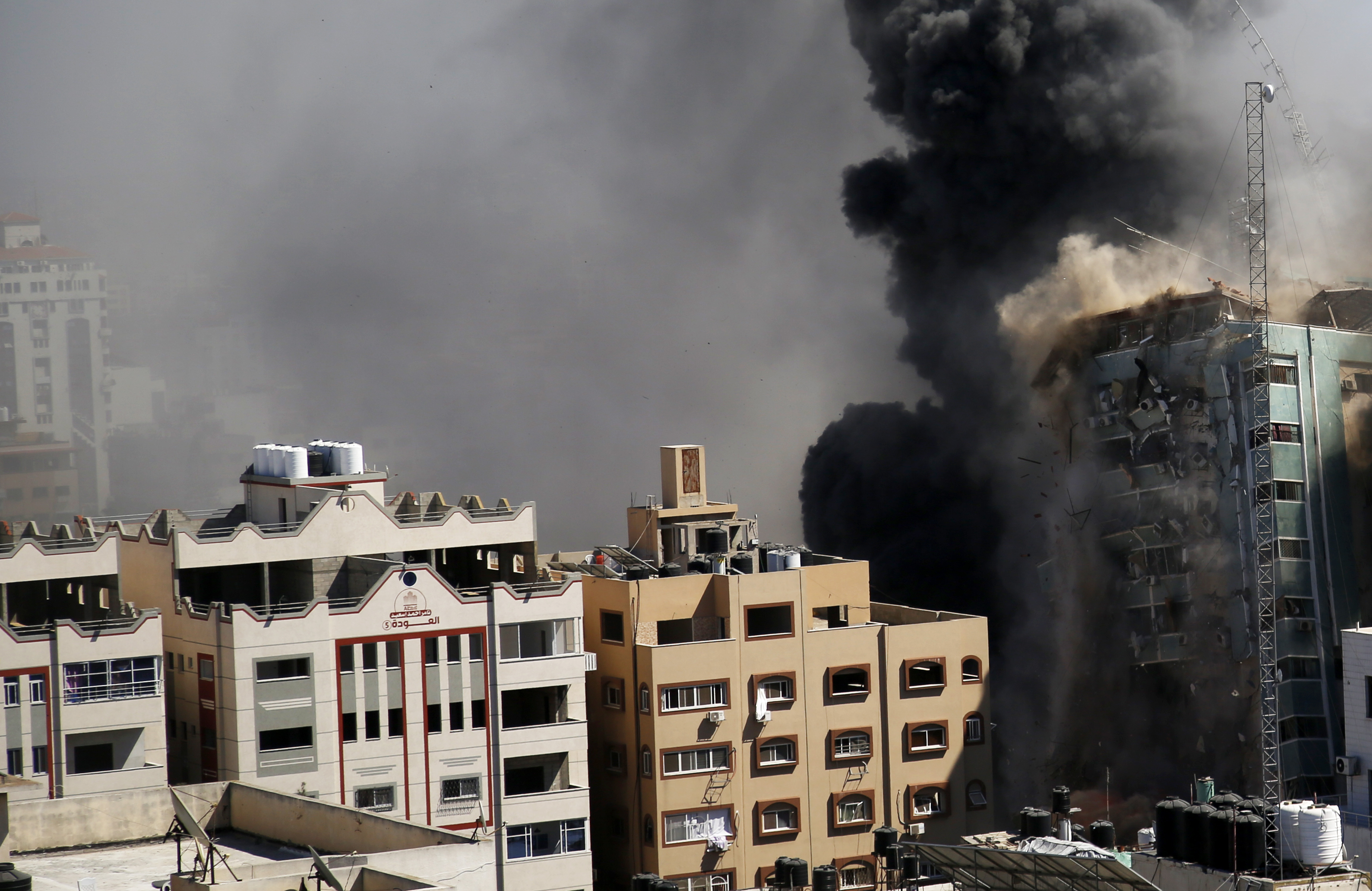 "All I'm asking is to let four people ... to go inside and get their cameras," he says. "We respect your wishes, we will not do it if you don't allow it, but give us 10 minutes." When the officer rejected the request, Mahdi said, "You have destroyed our life's work, memories, life. I will hang up, do what you want. There is a God."

Al-Jazeera, the news network funded by Qatar's government, broadcast the airstrikes live as the building collapsed.

Al-Jazeera has called the Israeli bombing a "clear act" to stop journalists from reporting on the conflict between it and Hamas.

The Doha-based broadcaster issued a statement on Saturday night (Sunday 2am AEST), saying: "Al-Jazeera calls on all media and human right institutions to join forces in denouncing these ruthless bombing and to hold the government of Israel accountable for deliberately targeting journalists and media institutions." 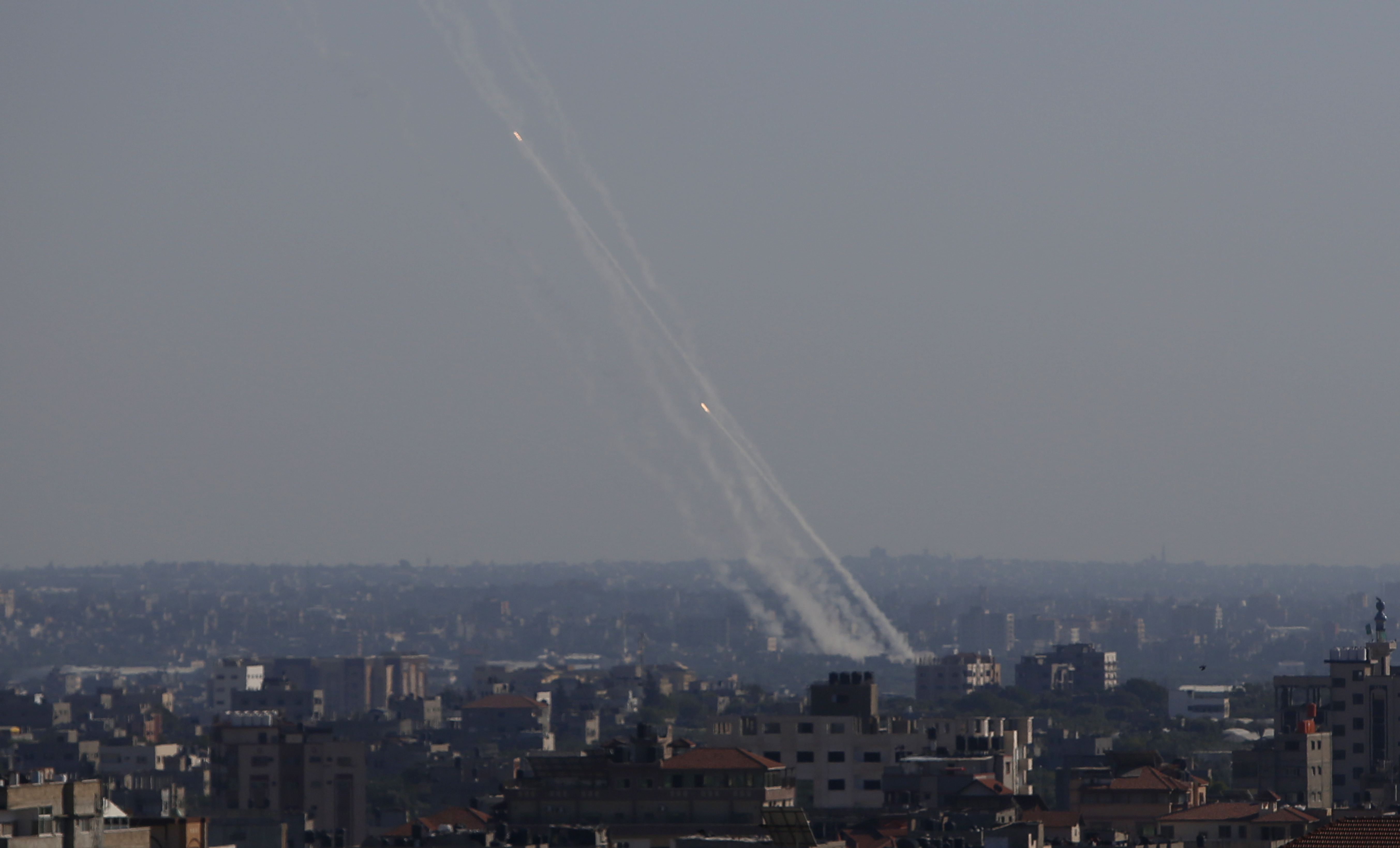 "The aim of this heinous crime is to silence the media and to hide the untold carnage and suffering of the people of Gaza," Souag said.

The White House also responded to the incident by saying Israel had a "paramount responsibility" to ensure the safety of journalists covering the spiralling conflict.

US President Joe Biden has urged a deescalation in the 5-day conflict between Hamas and Israel, but has publicly backed Israel's right to self-defence from Hamas rockets fired from Gaza.

White House press secretary Jen Psaki tweeted on Saturday that the US had "communicated directly to the Israelis that ensuring the safety and security of journalists and independent media is a paramount responsibility." The latest outburst of violence started in Jerusalem and spread across the region over the past week, with Jewish-Arab clashes and rioting in mixed cities of Israel.

There were also widespread Palestinian protests on Friday in the occupied West Bank, where Israeli forces shot and killed 11 people.

The spiralling violence has raised fears of a new Palestinian "intifada," or uprising, when peace talks have not taken place in years.

Palestinians on Saturday were marking Nakba (Catastrophe) Day, when they commemorate the estimated 700,000 people who were expelled from or fled their homes in what was now Israel during the 1948 war surrounding its creation. That raised the possibility of even more unrest.

US diplomat Hady Amr arrived on Friday as part of Washington's efforts to de-escalate the conflict, and the UN Security Council was set to meet on Sunday. But Israel turned down an Egyptian proposal for a one-year truce that Hamas rulers had accepted, an Egyptian official said on Friday on condition of anonymity to discuss the negotiations.

As the hostilities continued, an Israeli bombardment struck a three-story house in Gaza City's Shati refugee camp on Saturday morning, killing eight children aged 14 and under and two women from an extended family. 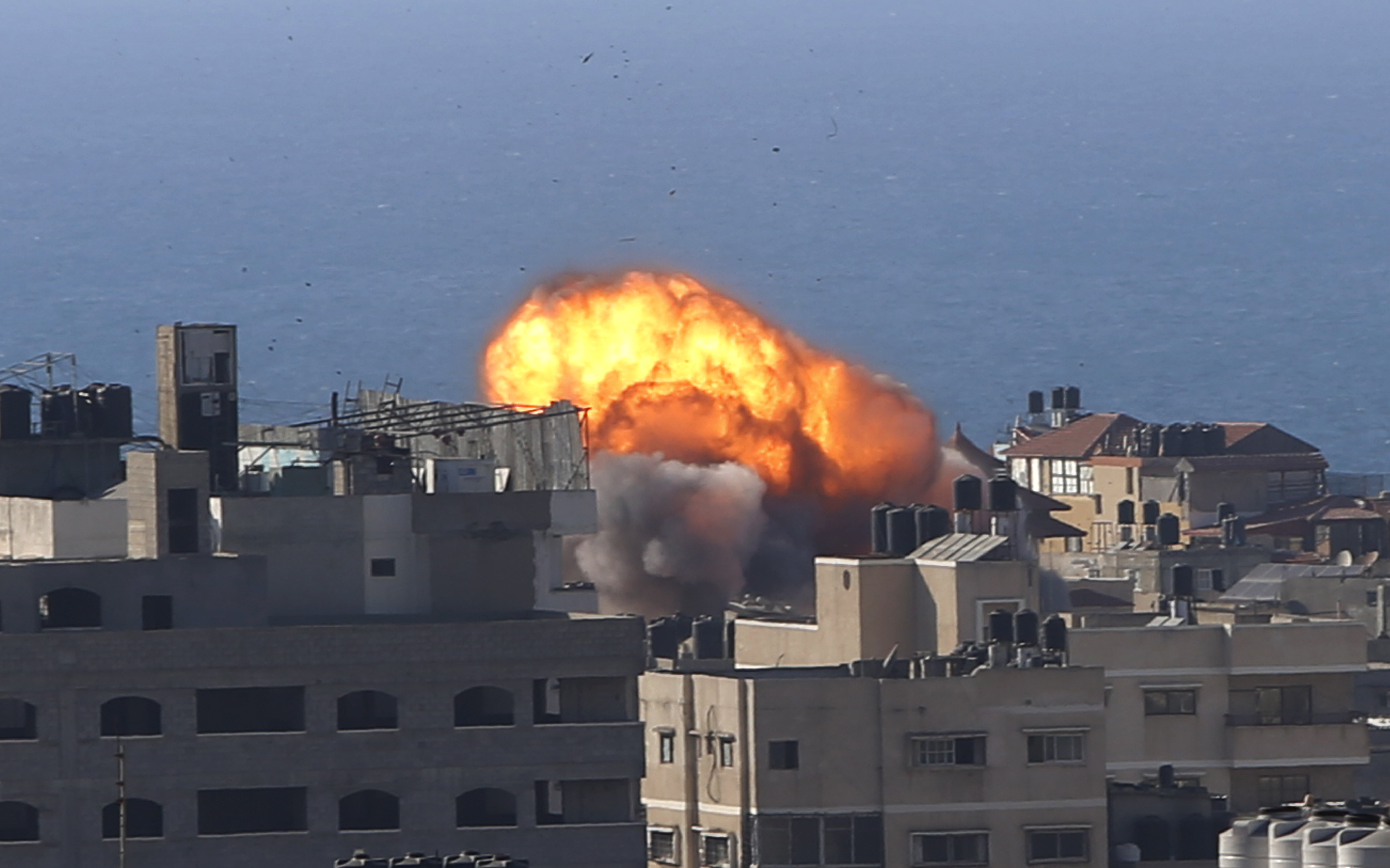 Mohammed Hadidi told reporters his wife and five children had gone to celebrate the Eid al-Fitr holiday with her brother's wife and three of their children. All were killed instantly, he said.

The only known survivor from Hadidi's family was his 5-month-old son Omar; another son, 11-year-old Yahya, was missing, he said.

Children's toys and a Monopoly board game could be seen among the rubble, as well as plates of uneaten food from the holiday gathering.

"There was no warning," Jamal Al-Naji, a neighbour living in the same building, said. "You filmed people eating and then you bombed them?" he said, addressing Israel. "Why are you confronting us? Go and confront the strong people!"

The Israeli military did not immediately respond to a request for comment. Hamas said it fired a salvo of rockets at southern Israel in response to the airstrike. A furious Israeli barrage early on Friday killed a family of six in their house and sent thousands fleeing to UN-run shelters. The military said the operation involved 160 warplanes dropping some 80 tons of explosives over the course of 40 minutes and succeeded in destroying a vast tunnel network used by Hamas.

Lt. Col. Jonathan Conricus, a military spokesman, said the military aims to minimise collateral damage in striking military targets. But measures it takes in other strikes, such as warning shots to get civilians to leave, were not "feasible this time."

Israeli media said the military believed dozens of militants were killed inside the tunnels. The Hamas and Islamic Jihad militant groups have confirmed 20 deaths in their ranks, but the military said the real number is far higher.

Gaza's infrastructure, already in widespread disrepair because of an Israeli-Egyptian blockade imposed after Hamas seized power in 2007, showed signs of breaking down further, compounding residents' misery. The territory's sole power plant is at risk of running out of fuel in the coming days.

READ:  Tas That Was – Wapping 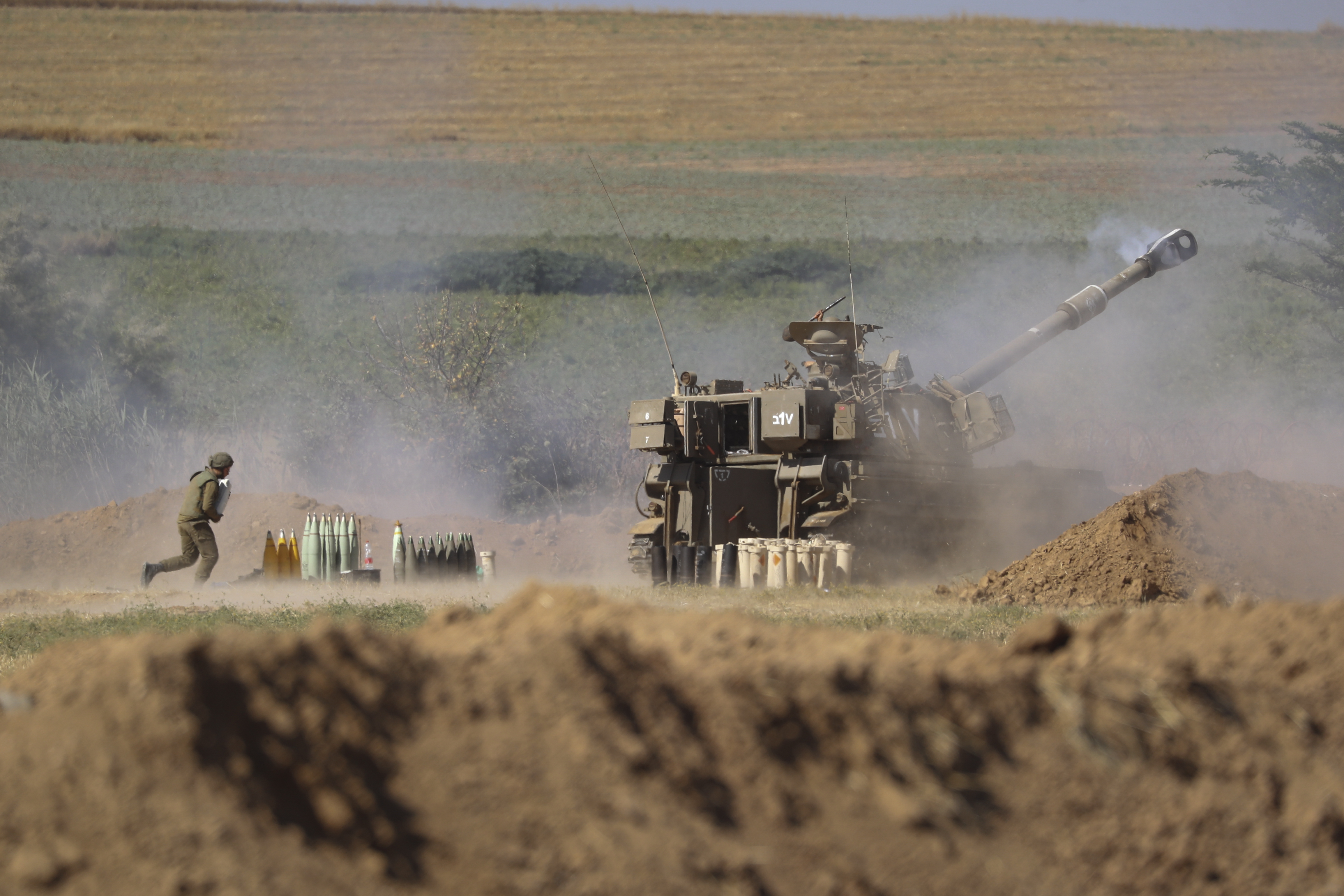 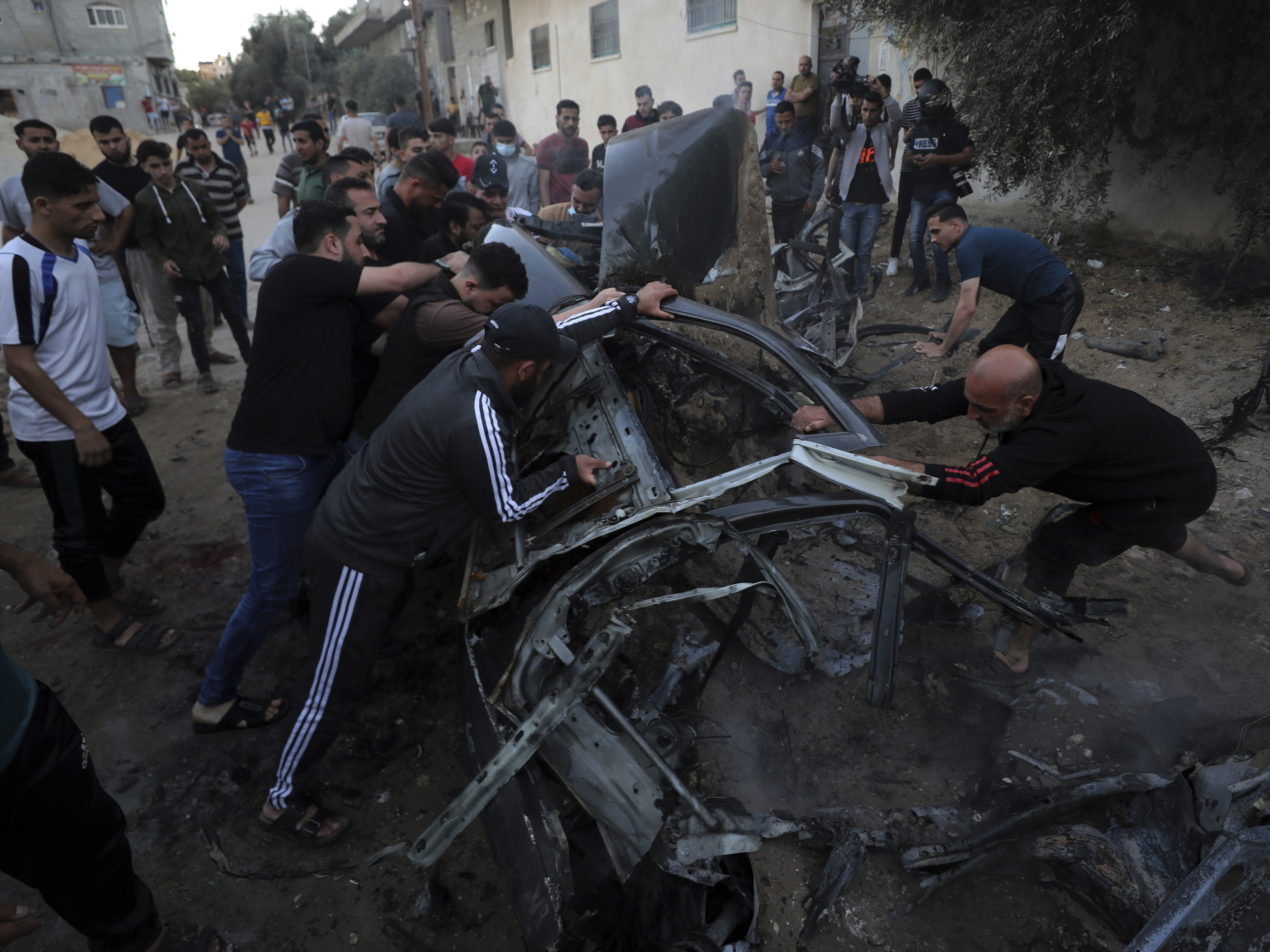 The UN said Gazans are already enduring daily power cuts of 8-12 hours and at least 230,000 have limited access to tap water. The impoverished and densely populated territory is home to 2 million Palestinians, most of them the descendants of refugees from what is now Israel.

The conflict has reverberated widely. Israeli cities with mixed Arab and Jewish populations have seen nightly violence, with mobs from each community fighting in the streets and trashing each other's property.

Late on Friday, someone threw a firebomb at an Arab family's home in the Ajami neighbourhood of Tel Aviv, striking two children. A 12-year-old boy was in moderate condition with burns on his upper body and a 10-year-old girl was treated for a head injury, according to the Magen David Adom rescue service.

In the occupied West Bank, on the outskirts of Ramallah, Nablus and other towns and cities, hundreds of Palestinians protested the Gaza campaign and Israeli actions in Jerusalem. Waving Palestinian flags, they trucked in tires that they set up in burning barricades and hurled stones at Israeli soldiers.

At least 10 protesters were shot and killed by soldiers. An 11th Palestinian was killed when he tried to stab a soldier at a military position. 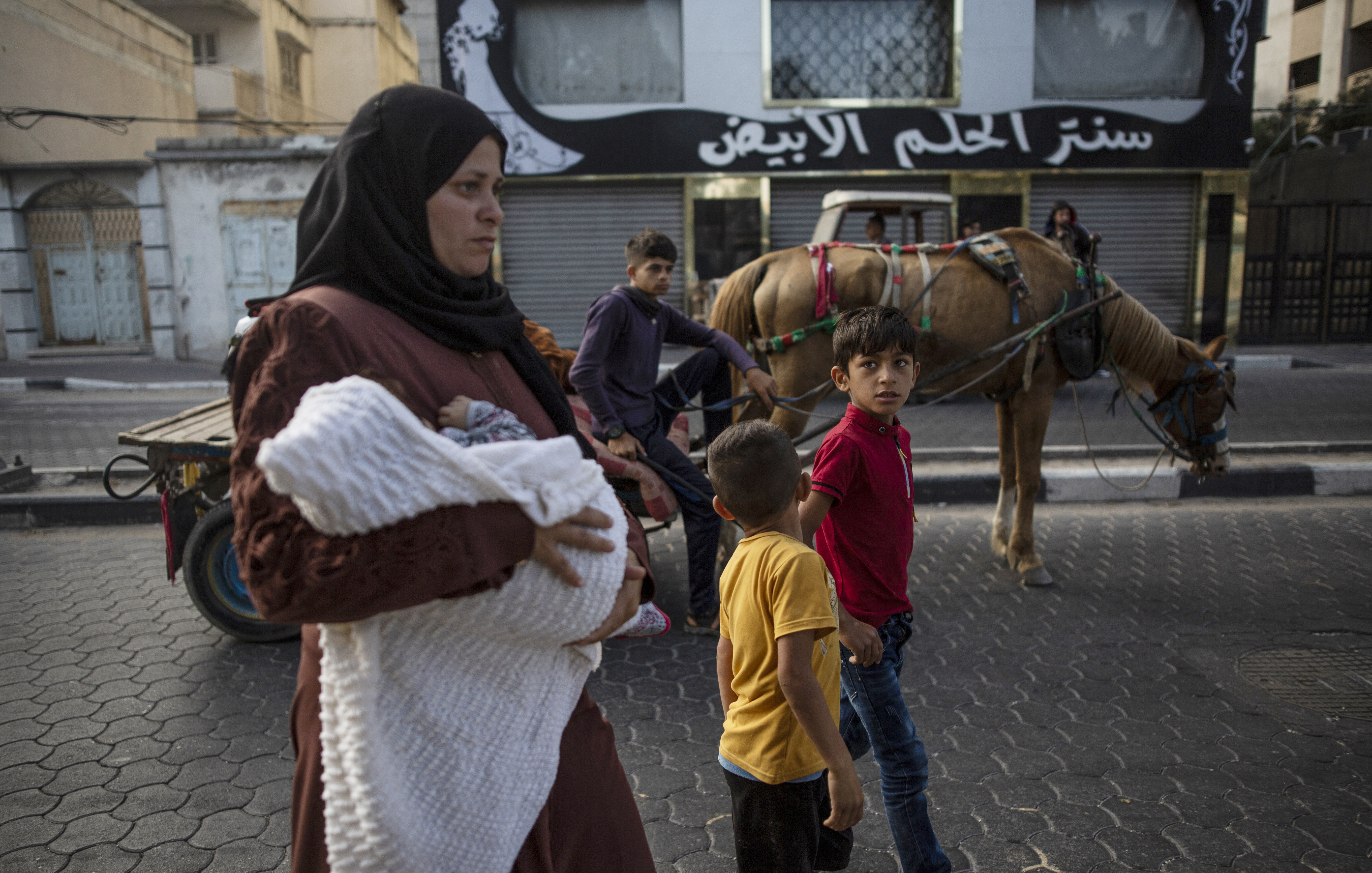 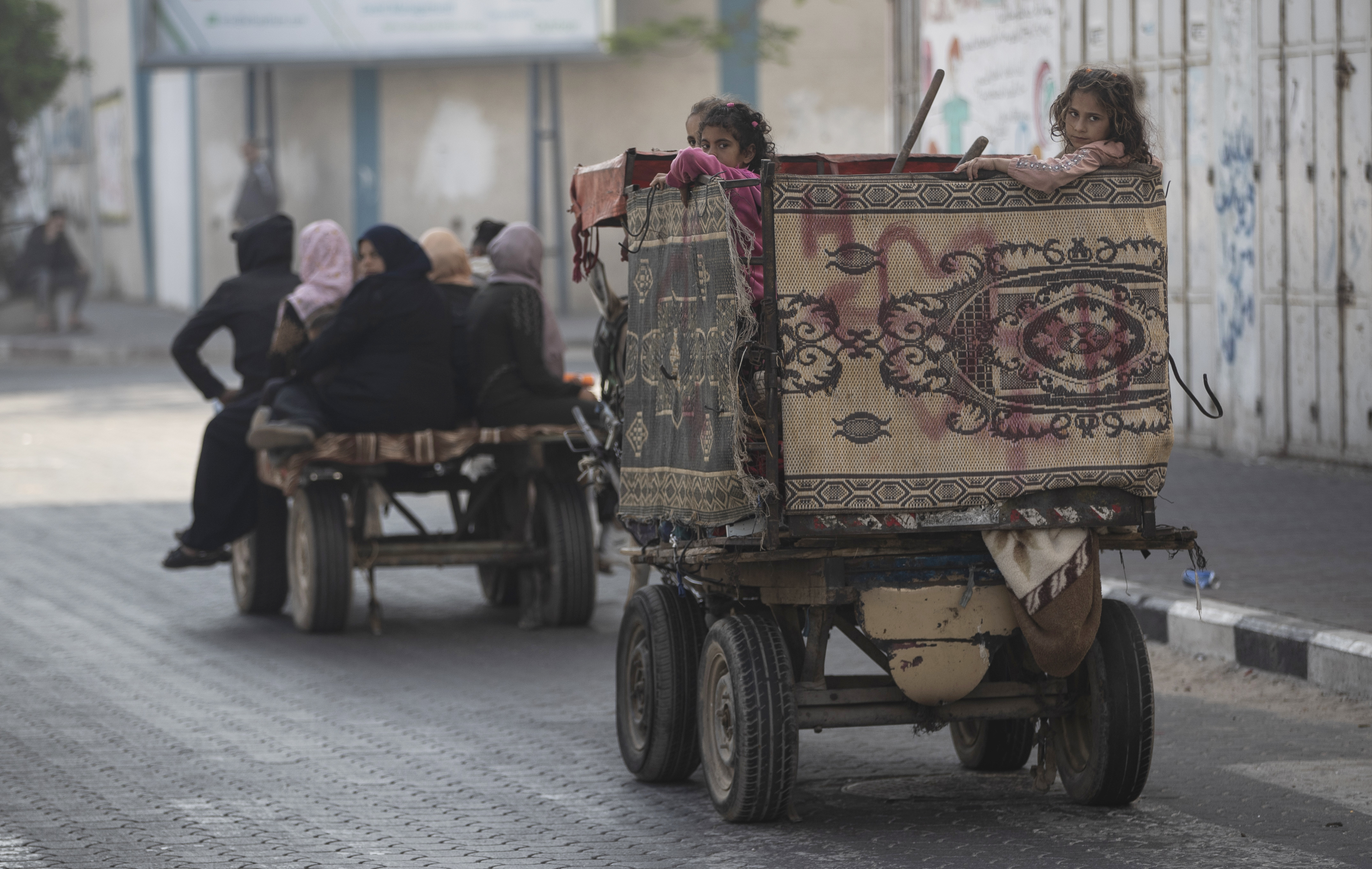 In east Jerusalem, online video showed young Jewish nationalists firing pistols as they traded volleys of stones with Palestinians in Sheikh Jarrah, which became a flashpoint for tensions over attempts by settlers to forcibly evict a number of Palestinian families from their homes.

On Israel's northern border, troops opened fire when a group of Lebanese and Palestinian protesters on the other side cut through the border fence and briefly crossed. One Lebanese was killed. Three rockets were fired toward Israel from neighbouring Syria without causing any casualties or damage. It was not immediately known who fired them.

The tensions began in east Jerusalem earlier this month, with Palestinian protests against the Sheikh Jarrah evictions and Israeli police measures at Al-Aqsa Mosque, a frequent flashpoint located on a mount in the Old City revered by Muslims and Jews. Hamas fired rockets toward Jerusalem late on Monday, in an apparent attempt to present itself as the champion of the protesters.

Prime Minister Benjamin Netanyahu has vowed that Hamas will "pay a very heavy price" for its rocket attacks as Israel has massed troops at the frontier.

US President Joe Biden has expressed support for Israel while saying he hopes to bring the violence under control.

Hamas has fired some 2,000 rockets toward Israel since Monday, according to the Israeli military.

Most have been intercepted by anti-missile defences, but they have brought life to a standstill in southern Israeli cities, caused disruptions at airports and have set off air raid sirens in Tel Aviv and Jerusalem.