The tradition of boiling animal bones until the water becomes a thick, flavorful broth is hardly a new one. Bone broth dates back to ancient times, but over the past few years, this collagen-rich beverage has been elevated to superfood status. Res…

The tradition of boiling animal bones until the water becomes a thick, flavorful broth is hardly a new one. Bone broth dates back to ancient times, but over the past few years, this collagen-rich beverage has been elevated to superfood status.

Restaurants that exclusively sell bone broth have popped up in major cities, and you can buy it in powdered or broth form at most major grocery stores. Devotees claim its collagen-rich properties have given them stronger hair and nails, glowing skin and improved their mood. Plus, who can say no to a savory, steaming hot beverage in the freezing cold winter months?

Yes, bone broth does have some solid nutrients.

First, the good news: If you’re drinking bone broth for its nutritional benefits, it’s not for nothing. Nutritionist Tamar Samuels told HuffPost that the health benefits of bone broth come from several key nutrients that aren’t abundant in the standard American diet. “Bones are one of the best food sources of collagen and several other nutrients, including iron, calcium, Vitamin D, Vitamin C and thiamin (B1),” she said.

She added that the gelatin formed from collagen in bone broth has several health benefits, such as improving sleep and boosting mood. And it’s better for you than regular chicken or beef broth, which are made with meat in addition to bones. 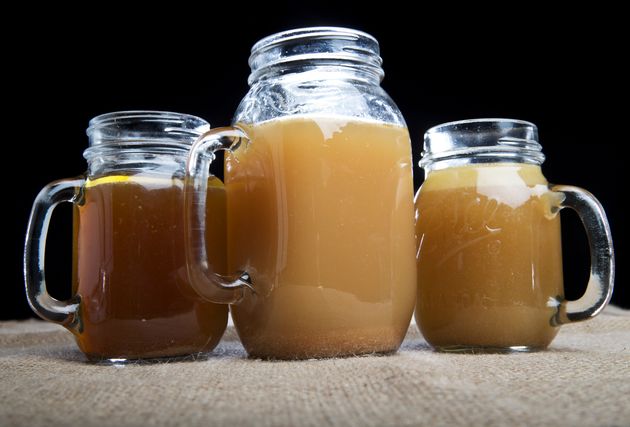 “Beef or chicken stock is made from both bones and meat, and is generally cooked for less time, whereas bone broth is made from mostly bones and ligaments with little to no meat, and cooked for 6-18 hours depending on which type of bones you use,” Samuels said. “This longer cooking time helps to extract more nutrients from the bone and release more collagen from bone, thus creating a more nutrient-dense broth.”

Collagen plays a key role in our health — it’s responsible for skin elasticity and joint and bone health, among other things — and as we age, our bodies naturally produce less of it. So sipping a collagen-rich beverage seems like a wise move from a health and beauty perspective, right? Not so fast. Steven Gundry, a heart surgeon and pioneer in nutrition, says collagen cannot be absorbed as collagen after you ingest it.

“Your body doesn’t have a system that says if you eat collagen, or any other complex protein, that you will remake that particular protein on the other side of the intestinal wall,” he said. “Sure, you’ll have the building blocks to make collagen, but you could do that by ingesting foods or supplements high in proline and lysine, the two main amino acids in collagen.”

In other words, if you’re drinking bone broth exclusively for the collagen, it probably isn’t doing much for you. To burst your bone broth bubble further, Gundry said bone broth is a source of the amino acid glutamine, which does have some benefits, but can also be manufactured by our bodies from glucose — and too much of it isn’t exactly a good thing. “Just the right amount of glutamine balances things out in your nervous system, but too much becomes a neurotoxin, glutamate,” he explained.

How to make bone broth (that actually tastes good) at home:

If the $11 (or more!) price tag isn’t enough to motivate you to make your bone broth at home, Gundry advises all of his patients to do so anyway, as you can have greater control over the bones and vegetables you use and opt for more nutrient-rich, lower-toxin ingredients.

There’s no question that making your own bone broth is a good option, but there’s one problem with that: It’s really hard to make it taste good. In fact, it’s a lot easier to make it taste like warm dishwater than a flavourful, rich broth.

Brodo chef and “Brodo: A Bone Broth Cookbook” author Marco Canora said people make a few key mistakes when making their own broth, the first of which is choosing the wrong types of bones. “If you go to the butcher and get a bunch of marrow bones, they’re clean, white bones with a lot of fat in the center,” he said. “So when you just cook a bone, you get a milky white broth that tastes bad.”

What you need, according to Canora, is meaty bones — and a variety of them. “If we’re talking cows, neckbones are great. They’re nubby, and processing plants can’t get all the meat off them,” he said. “Neckbones also have a lot of connective tissues, and at every joint there’s collagen. Knucklebones are another good option, as well as mixed bones, which are usually the rib cages, scapula, and the hips. I don’t use a ton of those, but I do use some because there’s meat left on those bones.”

Another common mistake? Using too much water, or anything but fresh, organic vegetables, according to Canora. Previously frozen or powdered vegetables mean less taste, not to mention nutritional value. Canora swears that if you follow his tips, you’ll end up with a mouthwatering homemade broth you can’t stop sipping. Why not try it?

If you’re a bone broth fan and can afford it, there’s certainly no reason to give it up. It’s comforting, delicious and good for you. As long as you’re aware that it probably won’t cure every ache or pain or restore your youth, go ahead — drink up.