A Chinese international student has been located safe after she was allegedly targeted in a “virtual kidnapping” phone scam in Sydney earlier this month.

A Chinese international student has been located safe after she was allegedly targeted in a "virtual kidnapping" hoax in Sydney earlier this month, which scammed her family out of more than $200,000.

Police say the 18-year-old was reported missing on Tuesday, September 8 after videos and images of her were sent to her family in China via WeChat.

The videos were followed by demands for money by an individual claiming to be Chinese Police, to ensure the woman's safe return.

A specialist police strike force was established and following an extensive investigation involving the Australian Federal Police and Chinese authorities, the woman was located safe and well at Pyrmont on Tuesday September 15.

Detectives attended a unit in Chatswood, on Sydney's Lower North Shore a short time later, where a crime scene was established.

A 22-year-old man was spoken to by police and the investigation is ongoing.

"In this incident, police have been told initial contact was made in July this year after the woman received an email from persons purporting to be Chinese Police and claiming her personal details had been illegally used on a package intercepted overseas," Chief Supt Bennett said.

"Since that time, more than $213,00 has been transferred into an offshore account following demands for money – which appears to have evolved into a virtual kidnapping." 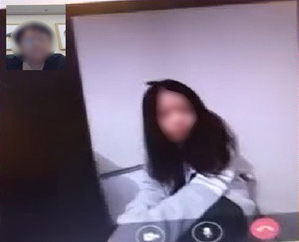 He said scammers continue to adapt their scripts and methodology which are designed to take advantage of people's trust in authorities.

"In one of the images sent to family members, another person can be seen in the room," Chief Supt Bennett said.

"Police are continuing to conduct enquiries into the role of this man in the incident, or whether the person was also a victim of a similar scam."

Chief Supt Bennett reminded the public that no person claiming to be from a Chinese authority such as police, procuratorates or courts will contact a student on their mobile phone and demand money be paid.

"The advice for anyone who receives a call involving demands for money under the threat of violence is to hang up, contact the Chinese Consulate in Sydney to verify the claims and report the matter to NSW Police," he said.