A Christmas morning explosion that rocked downtown Nashville, injuring at least three people and damaging dozens of buildings, is believed to be an intentional act, authorities said.

Nashville police have released an image of the van that exploded in the US city on Christmas morning, injuring at least three people and damaging dozens of buildings.

The explosion is believed to be an intentional act, authorities said.

According to police, officers with the Metro Nashville Police Department were responding to a call of shots fired around 5:30am local time on Friday when they came upon an RV parked in front of an AT&T transmission building at 166 2nd Avenue North. The RV was playing a recorded message that indicated a bomb would explode in 15 minutes, Metro Nashville Police Chief John Drake said during a news conference on Friday.

The bomb squad was responding when the RV exploded at 6:30am local time, police spokesman Don Aaron said.

"We do believe this to have been an intentional act," he said. "Significant damage has been done to the infrastructure there on 2nd Avenue North."

Three people were transported to hospitals from the scene, but none were in critical condition, according to Nashville Fire spokesman Joseph Pleasant.

The force of the explosion knocked down one officer, Aaron said, and caused hearing loss in another - hopefully temporarily, he said. But no officers were significantly injured. 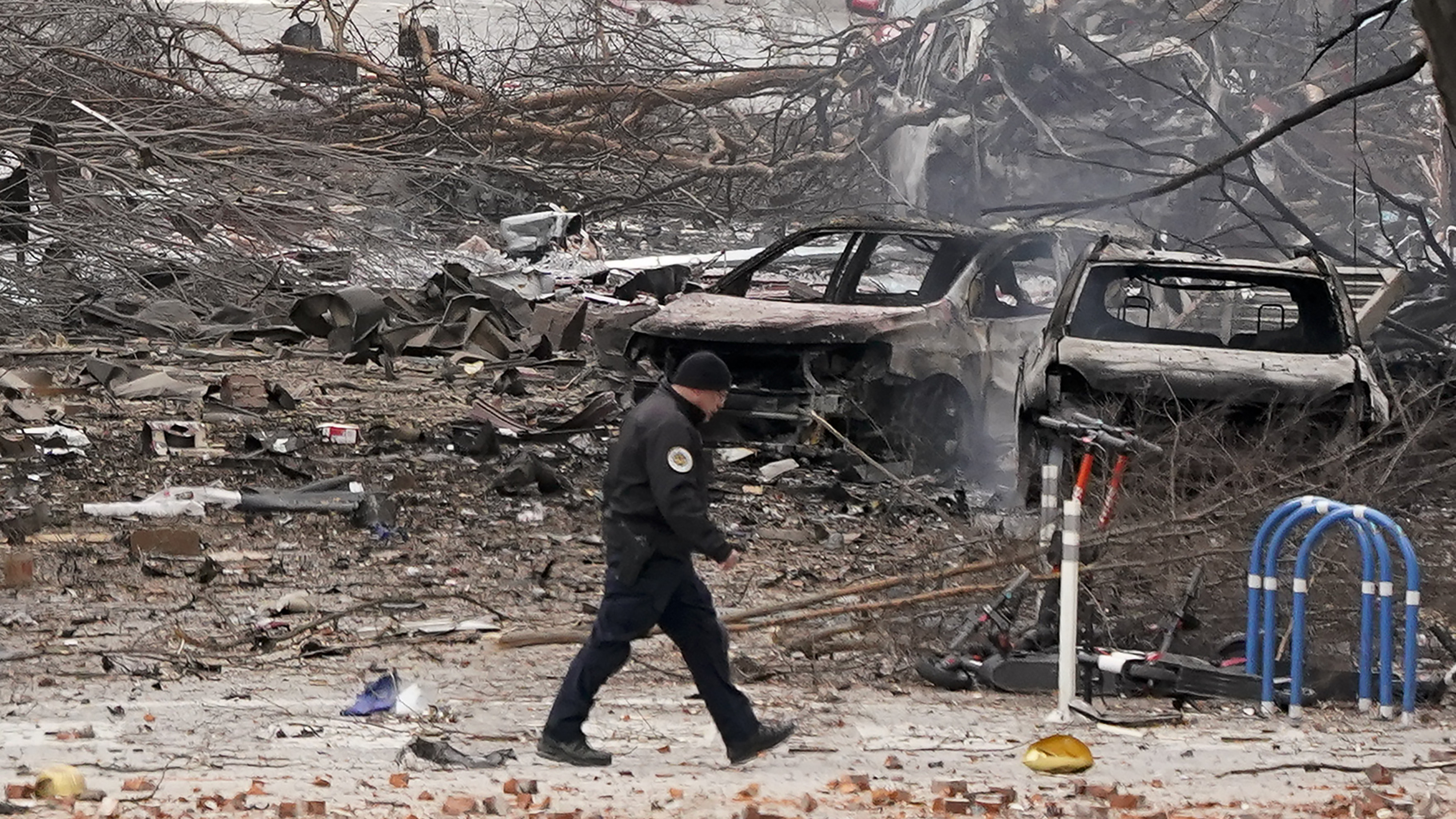 The FBI told CNN that its field office in Memphis is taking over the investigation.

Now, police have released an image of the RV that exploded, saying it had arrived on Second Avenue at about 1.22am.

In Friday's news conference, Special Agent in Charge Matt Foster urged the public to submit any tips or information related to the explosion.

Officials have no information about whether anyone was inside the RV when it exploded, Aaron said. There were no known credible threats in the Nashville area that would have signaled an impending attack on or before Christmas, a federal law enforcement source told CNN.

A second law enforcement source said federal authorities are not aware of any increased chatter nationally by known extremist groups that would indicate any credible plans for conducting attacks around the holidays. 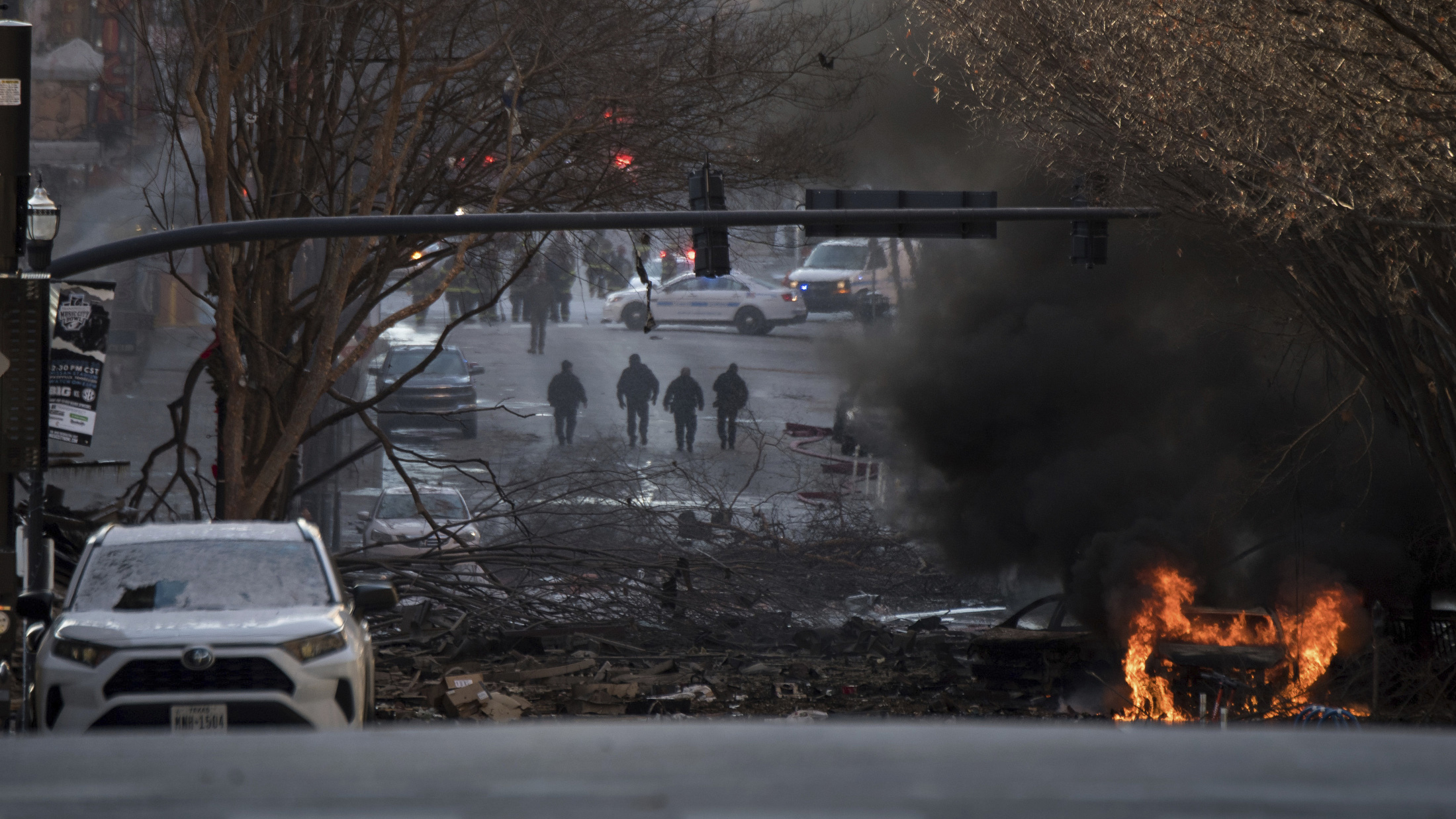 Acting US Attorney General Jeff Rosen was briefed on the incident, according to his spokesman, "and directed that all DOJ resources be made available to assist in the investigation."

The White House said that President Donald Trump has been briefed as well and would receive "regular updates."

Tennessee Gov. Bill Lee said in a statement on Twitter that the state would "supply all the resources needed" to determine the cause of the explosion.

'Everything on the street was on fire'

Eyewitness Buck McCoy told CNN the explosion took place right in front of his home, causing his windows to be blown in.

"Everything on the street was on fire," he said. "There were three cars that were fully engulfed."

McCoy said he was originally woken up by what he believed were gunshots about 10 minutes prior to the explosion.

He got up and looked out the window, he said, but went back to bed when he didn't see anything. 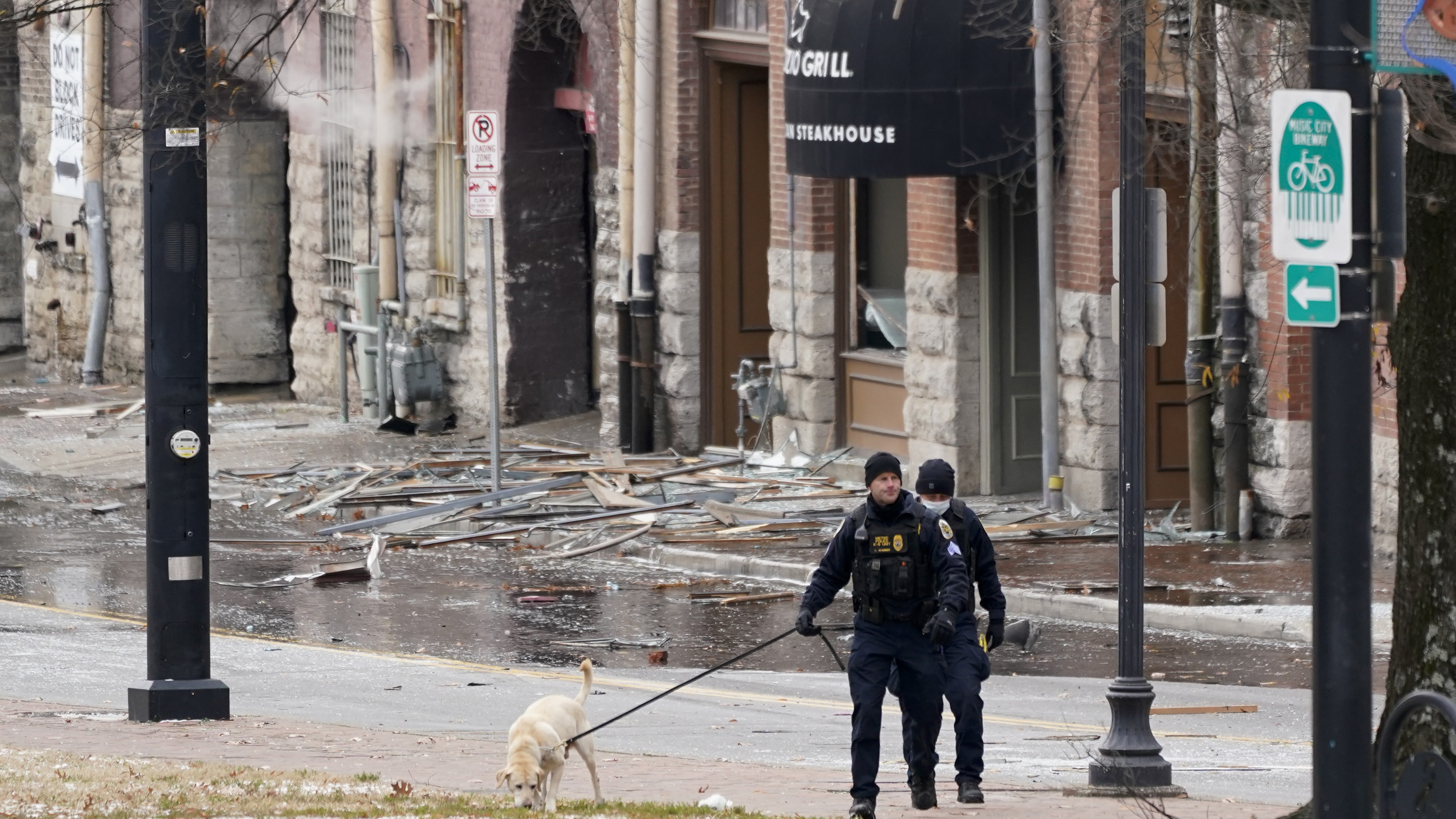 Asked if the noise he heard could have been something other than gunfire, McCoy emphasized that he believed it was, saying he owns a gun and goes shooting, so he's familiar with the sound of gunshots.

McCoy told CNN that when he looked outside after the explosion, trees had fallen and broken glass was everywhere. 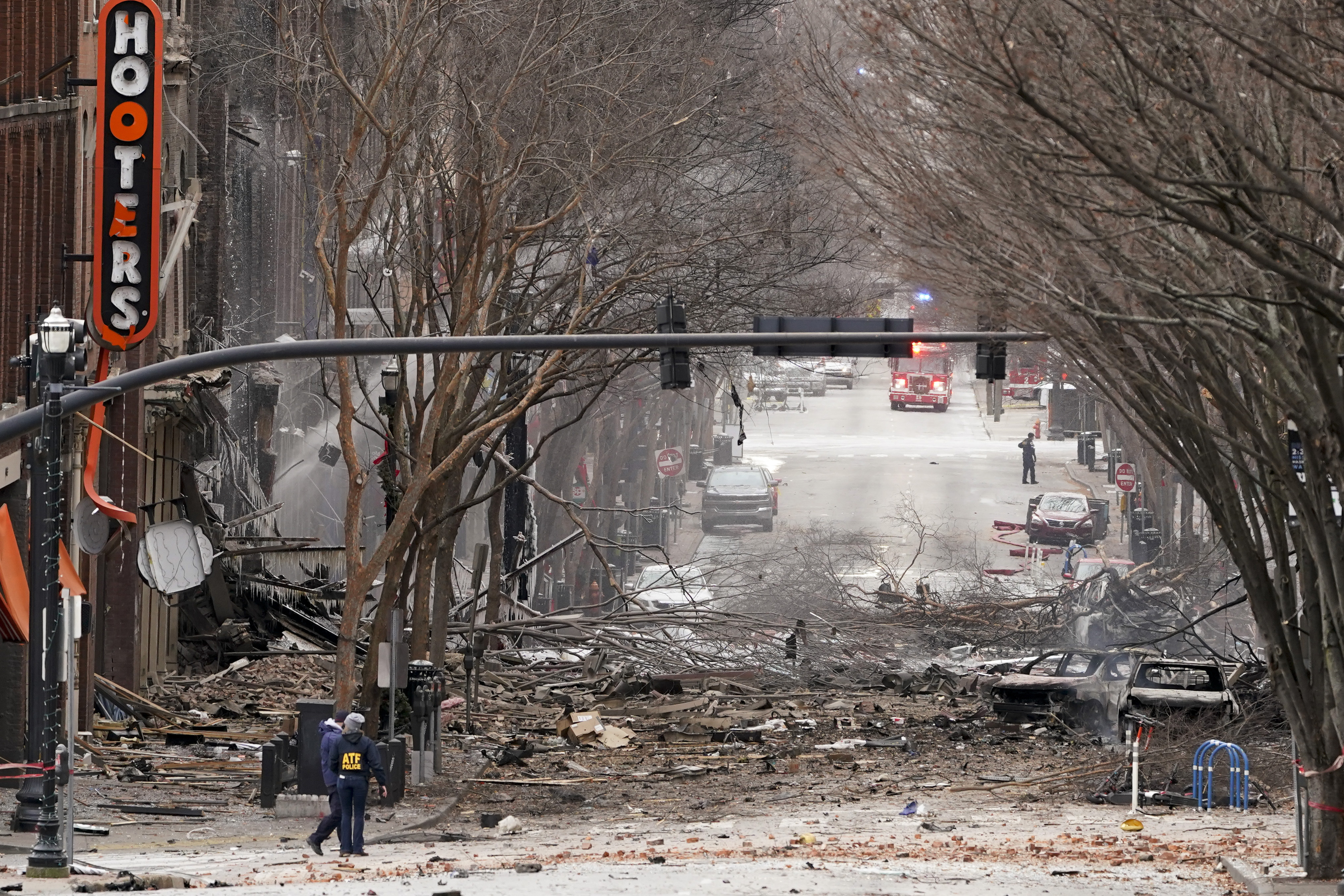 He saw people filing out of their apartments with their animals. Firefighters told him to get as far away from the area as possible, he said.

"There's just nothing left on 2nd Avenue," he said.

'Lives were saved' by evacuations

Prior to the explosion, officers had gone door-to-door or apartment-to-apartment to inform residents of the situation, Aaron said. 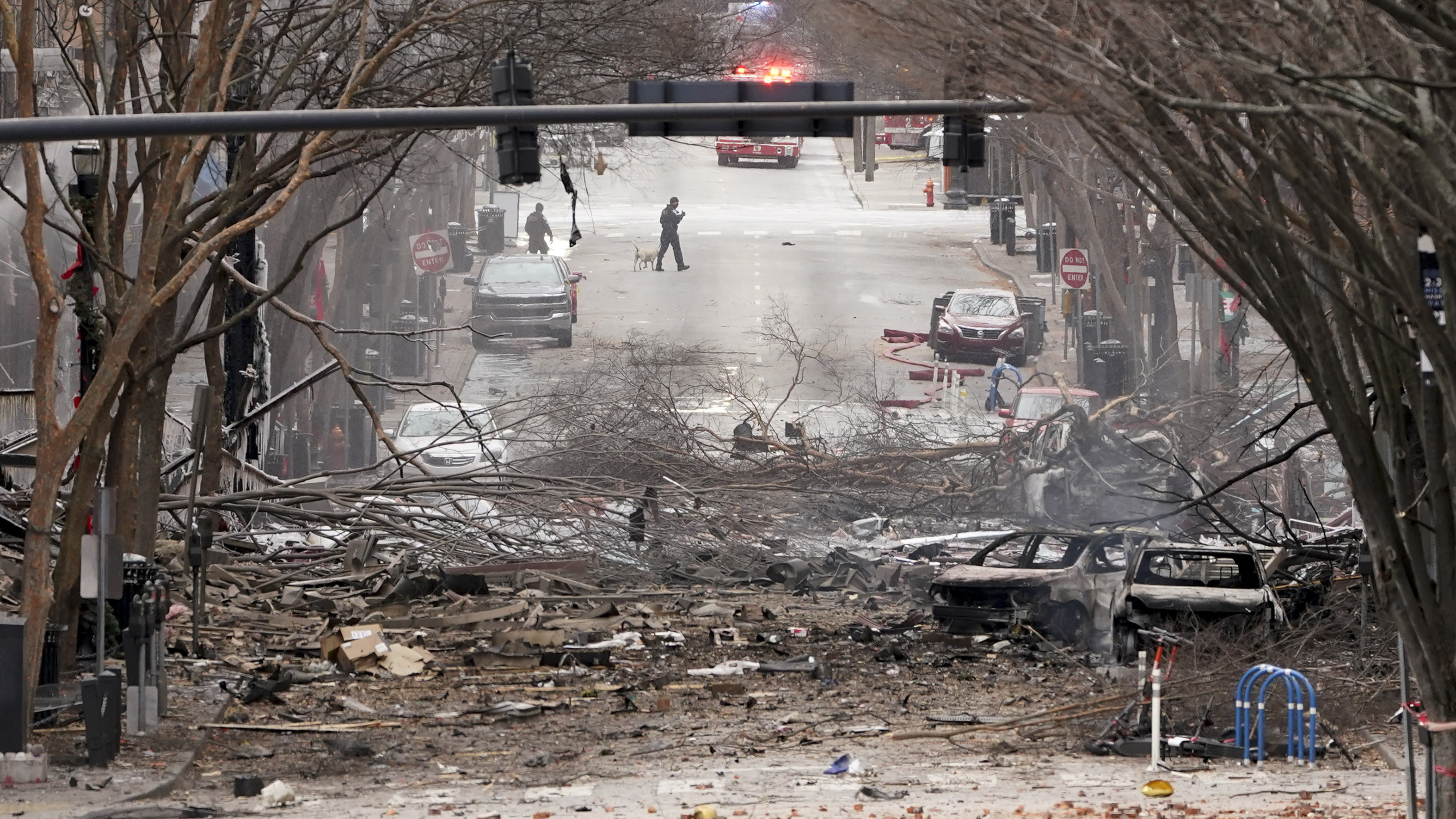 One man walking a dog on 2nd Avenue was redirected by an officer just before the RV exploded.

"We think lives were saved by those officers doing just that," Aaron said.

Technical experts from the FBI lab and evidence response teams have been brought in from around the country to "help process this massive crime scene," Foster said. 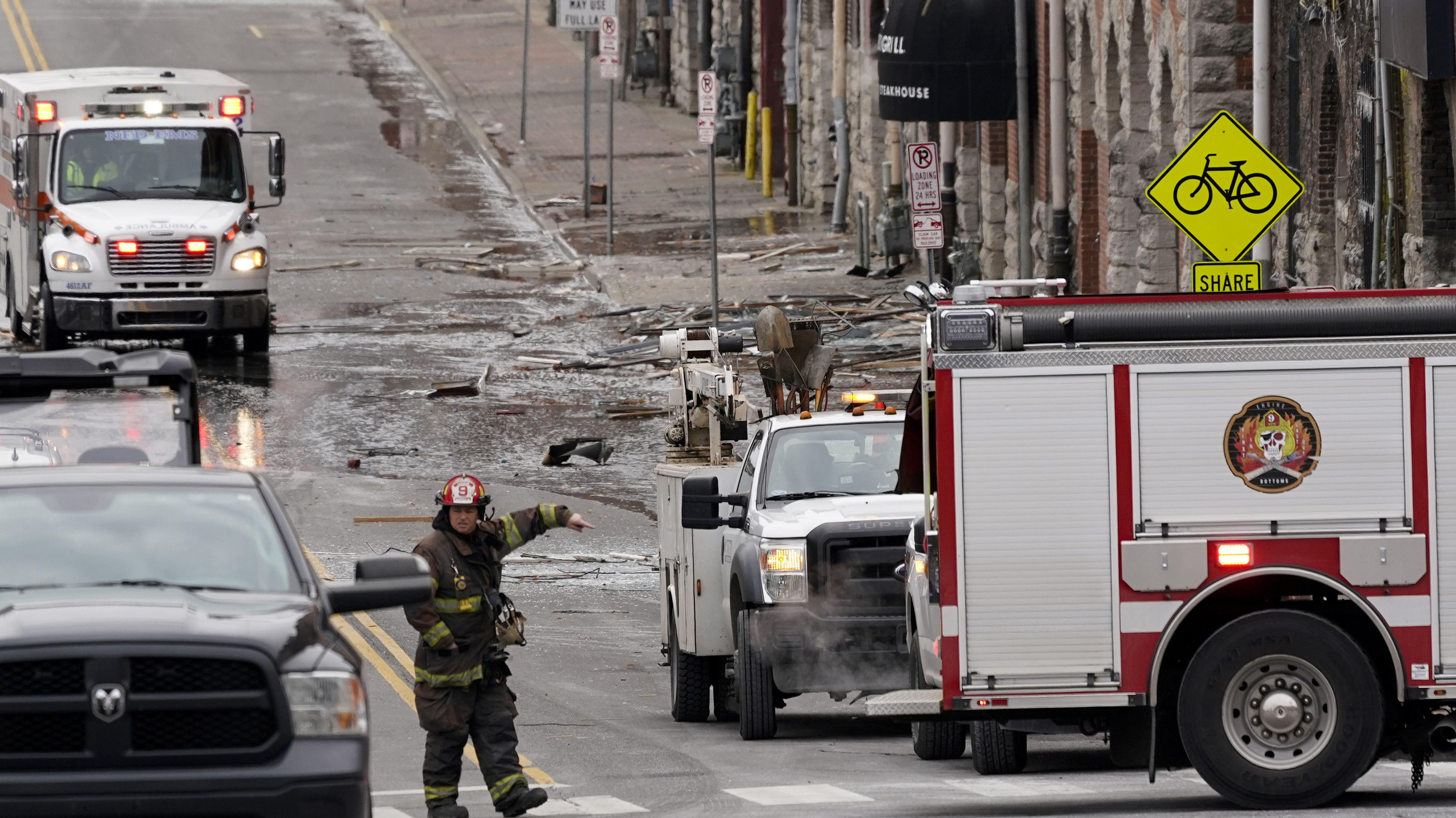 ATF Special Agent in Charge Mickey French said his agency had activated its national response teams and was working alongside the FBI and MNPD.

The agency has explosive specialists, chemists and engineers involved in the evidence recovery process.

Officials with the Nashville Fire Department are in the area to assess the structural integrity of buildings and ensure there are no other victims, Chief William Swann said.

Nashville Mayor John Cooper told CNN that dozens of buildings have been damaged, mostly from having glass blown out.

Some buildings have been evacuated, the mayor said, but he did not know how many buildings or how many people had been impacted. 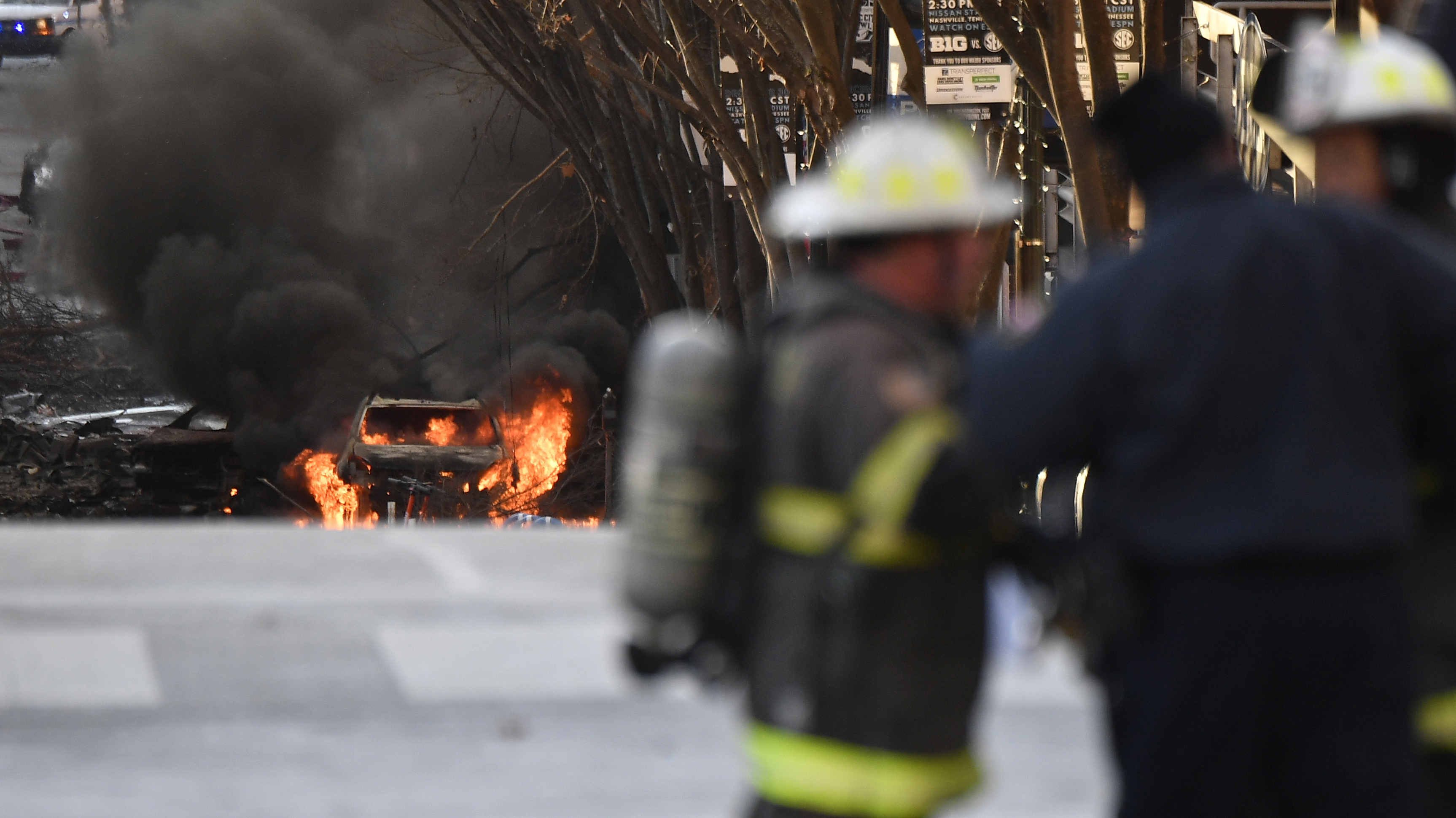 The street is on the edge of the Tennessee city's hospitality and tourist district in an old, historic part of town.

Cooper told CNN affiliate WSMV that the explosion was "clearly done when no one was going to be around."

"Fortunately not many people are here," he said.

AT&T spokesman Jim Greer told CNN that the company's network hub was damaged in the explosion and service in the Nashville area may be affected.