Deep within the Wollemi National Park in the Blue Mountains, NSW firefighters and scientists have fought to save the last remaining ‘dinosaur trees’ from extinction.

As the helicopter hovers over a remote, rugged, undisclosed gorge deep within the Wollemi National Park in the Blue Mountains, the team of specialist firefighters and scientists prepare themselves for a military-style mission.

They take turns to hook themselves onto a winch and step out onto the chopper's narrow skid. Whipped by wind and bushfire smoke, they lean back and begin the long 70 metre descent into the ancient forest below as around them, fires burn. 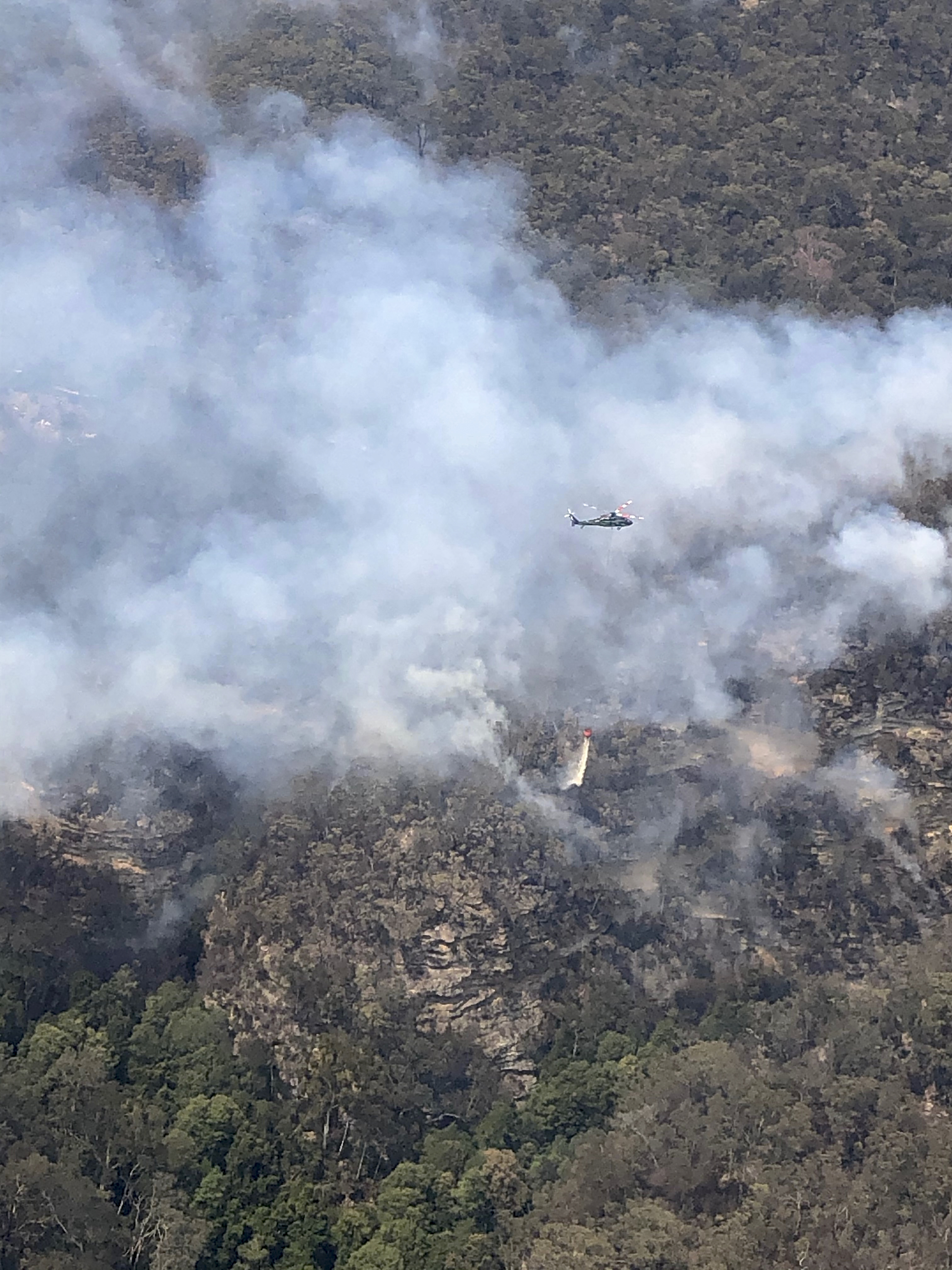 The target; a grove containing the world's last-surviving 200 Wollemi pines, a prehistoric species that dates back to the Jurassic era – a time when dinosaurs roamed the earth. The top-secret mission; build an irrigation system and protect the critically endangered trees from bushfire at all costs.

The mission was not without its challenges. A member of the irrigation team, who wishes to remain anonymous, told 9News.com.au, that just flying in posed a risk as smoke shrouded the pilot's visibility – and then there was the decent itself to contend with.

"Climbing out the first time, you realise this is a long winch – 72-metres to the creek. You can clearly see the Wollemi pines rising out of the forest and the burning ridges above," the team member said.

"The hole in the canopy you're aiming for is less than two metres wide so the pilot and aircrew are working hard to keep you on line under the downdraft. 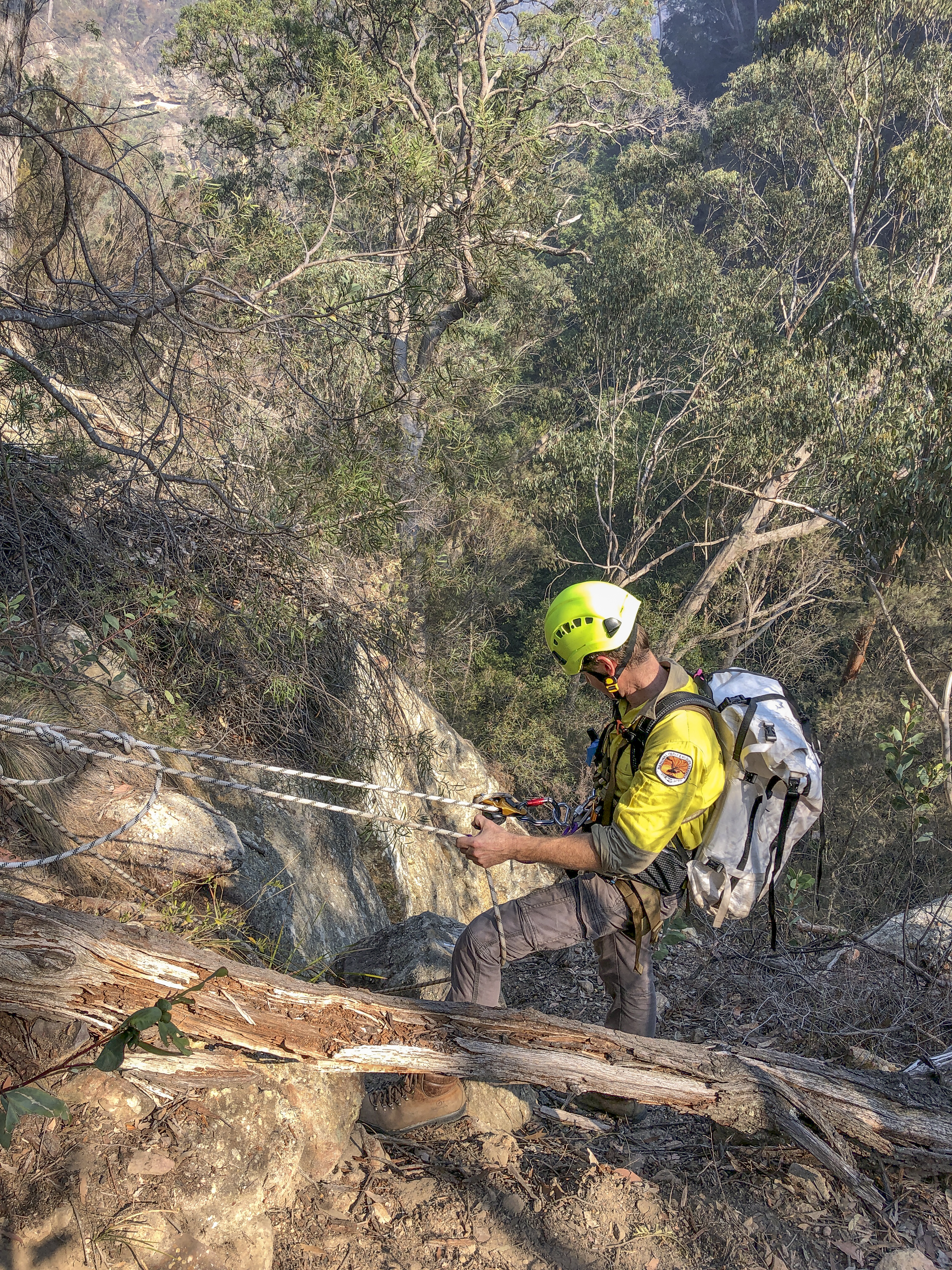 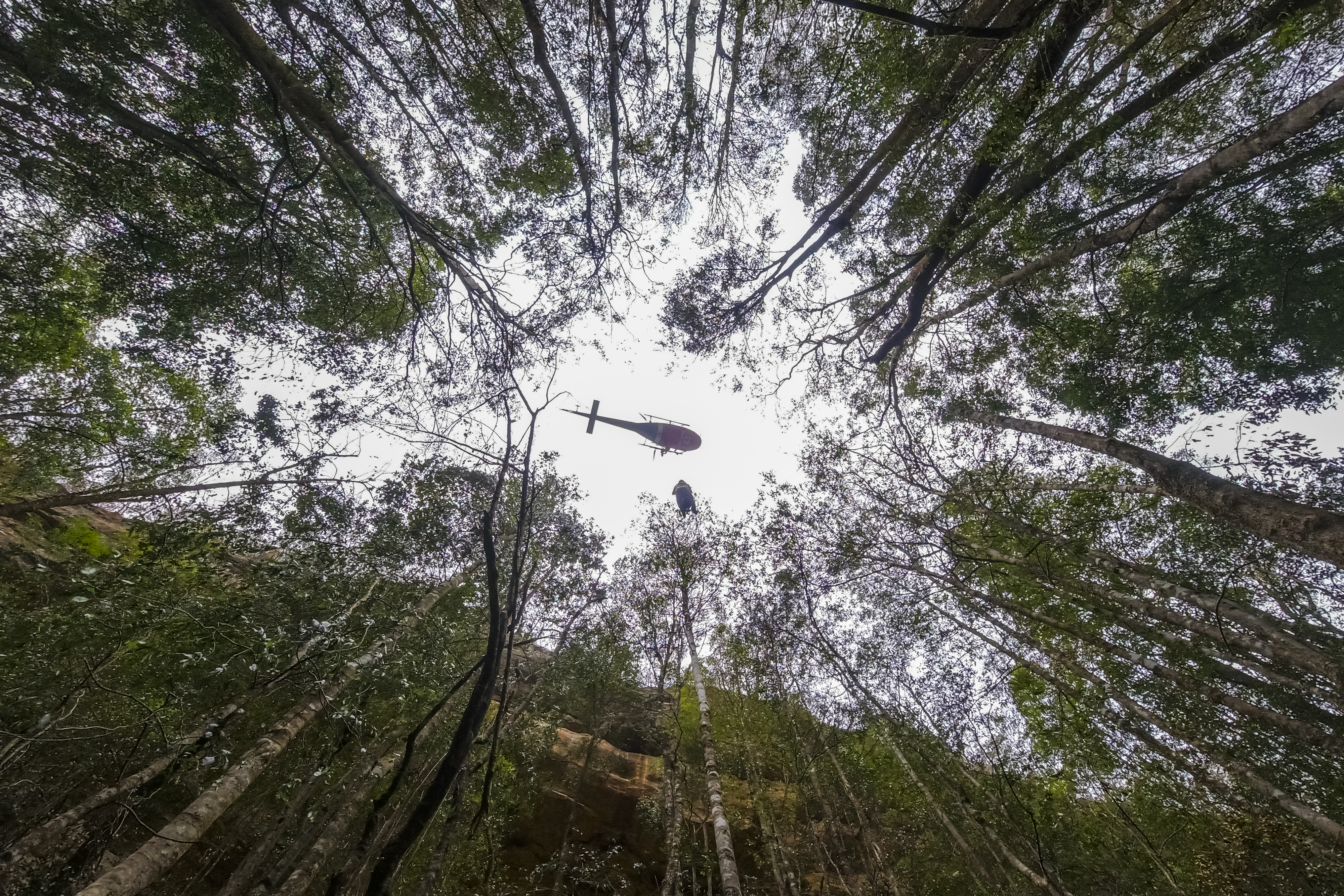 "It takes a couple of minutes to get down and the temperature drops quickly as you pass through the canopy and into the creek. Once the helicopter is gone, it's eerily calm and easy to forget the large fires burning above you. Each time the wind changes and the gully fills with smoke, there's a little apprehension, but a quick call to the aircraft above brings relief."

Inside the mission to save the pines

The mission to save the Wollemi pines began last December as the relentless Gospers Mountain mega-fire burned through the Blue Mountains National Park and encroached on the gorge.

National Parks and Wildlife Service (NPWS) firefighters and the NSW RFS worked alongside each other to set up an irrigation system, while large air tankers dropped fire retardant ahead of the blaze, and waterbombed the surrounding area to slow the fire down. 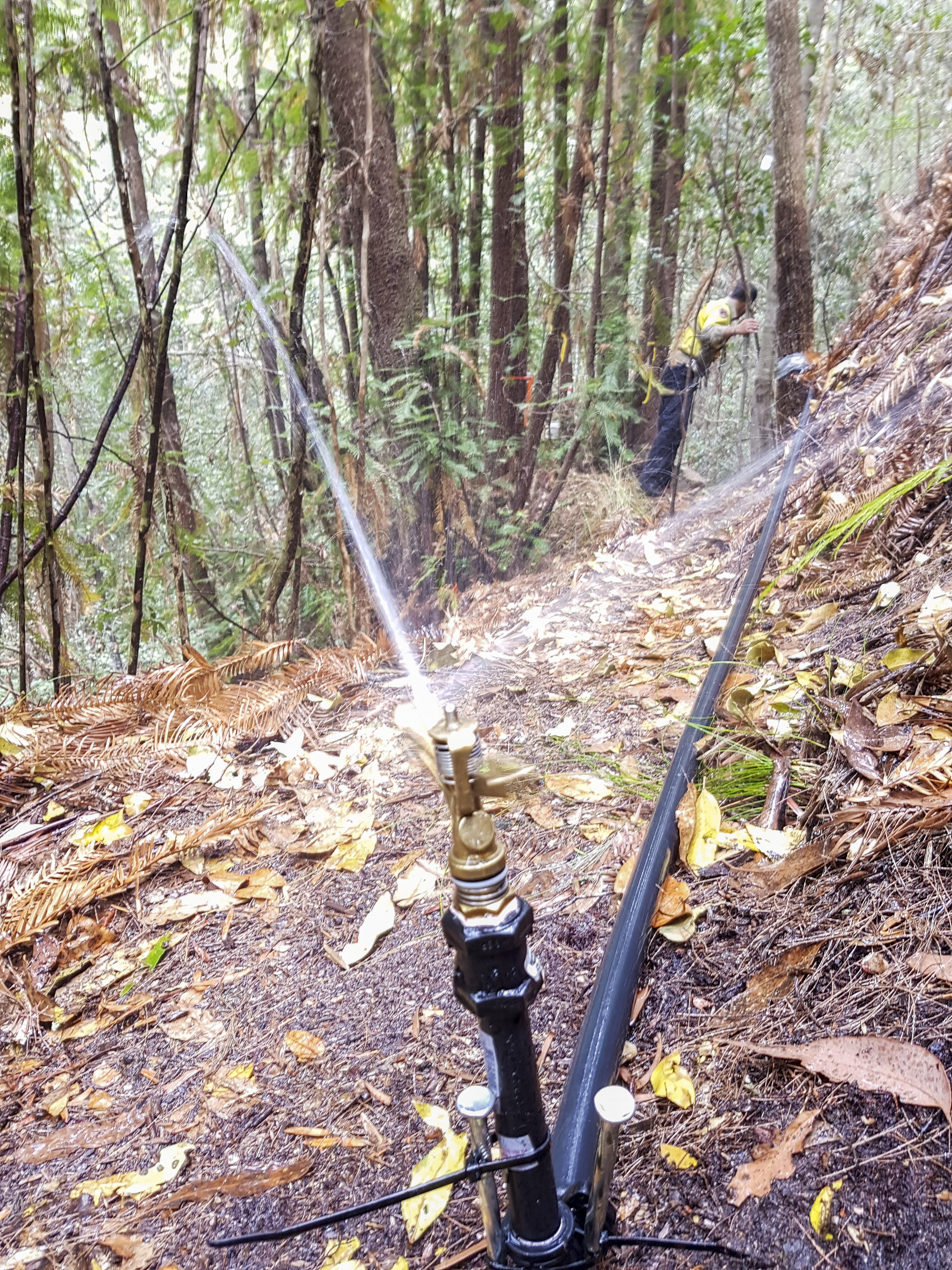 When the fire got too close, the team were extracted and faced a nail-bitting wait to learn whether the trees survived. There was no way to monitor the population once they had left the site.

Their efforts paid off, and last week the NSW National Parks and Wildlife Service took to Facebook to announce the mission was a success.

In a Facebook post, they wrote: "They've survived the dinosaurs, and they're surviving this season's bushfires. In fantastic news, the prehistoric Wollemi Pines have been confirmed as safe." 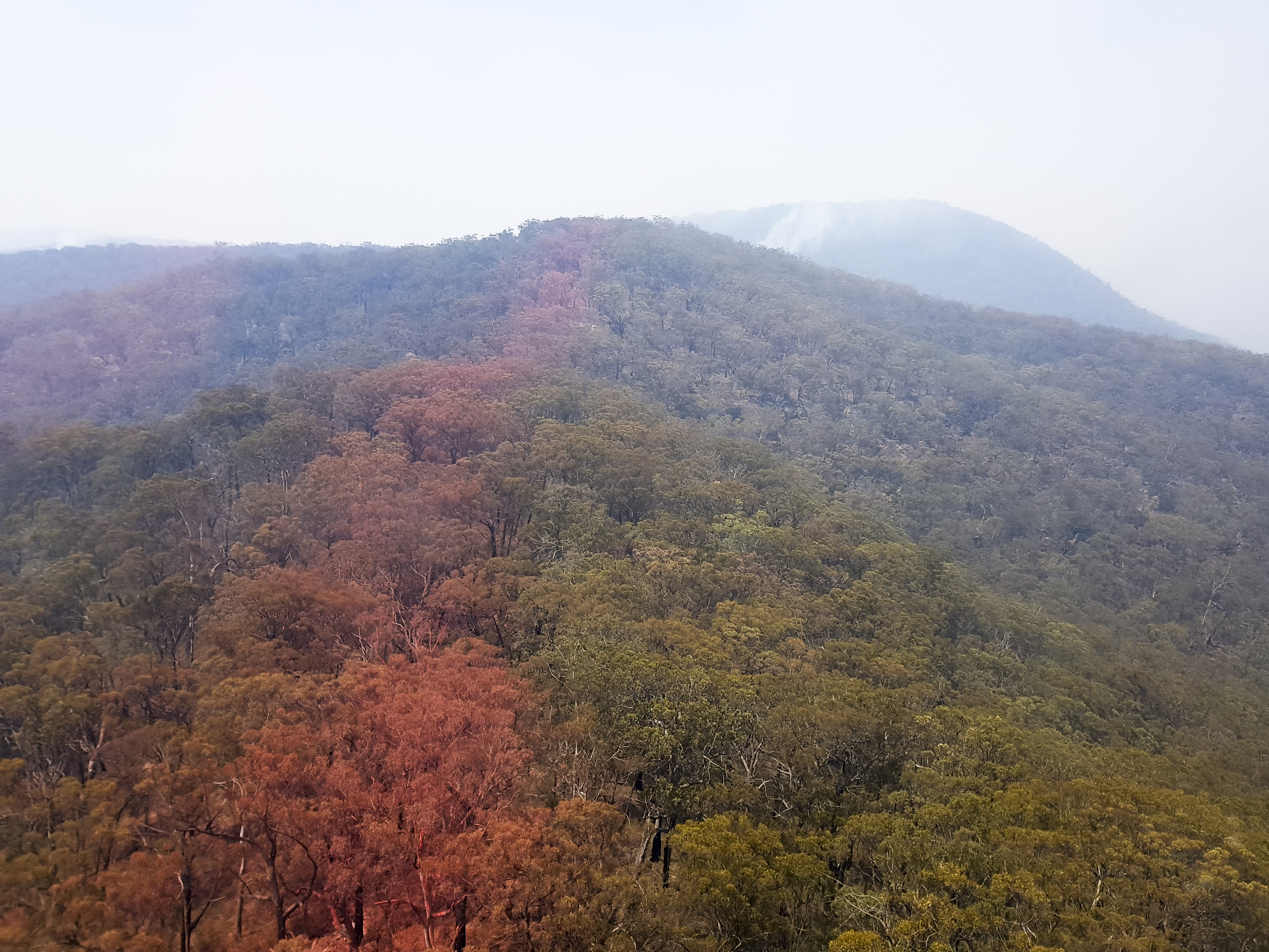 The same member of the irrigation team who described the scenes above said it was their honour to have been included in the project.

"When we had blacked out the last hot spot with the help of the helicopter, we were finally happy to say the pines were safe. We could then clearly see the results of everyone's efforts. The fire intensity had been significantly reduced by the irrigation system and the pines received little more than a light scorch.

"It was a great feeling to know we had saved these ancient trees from the terrible fires that had ravaged the area." 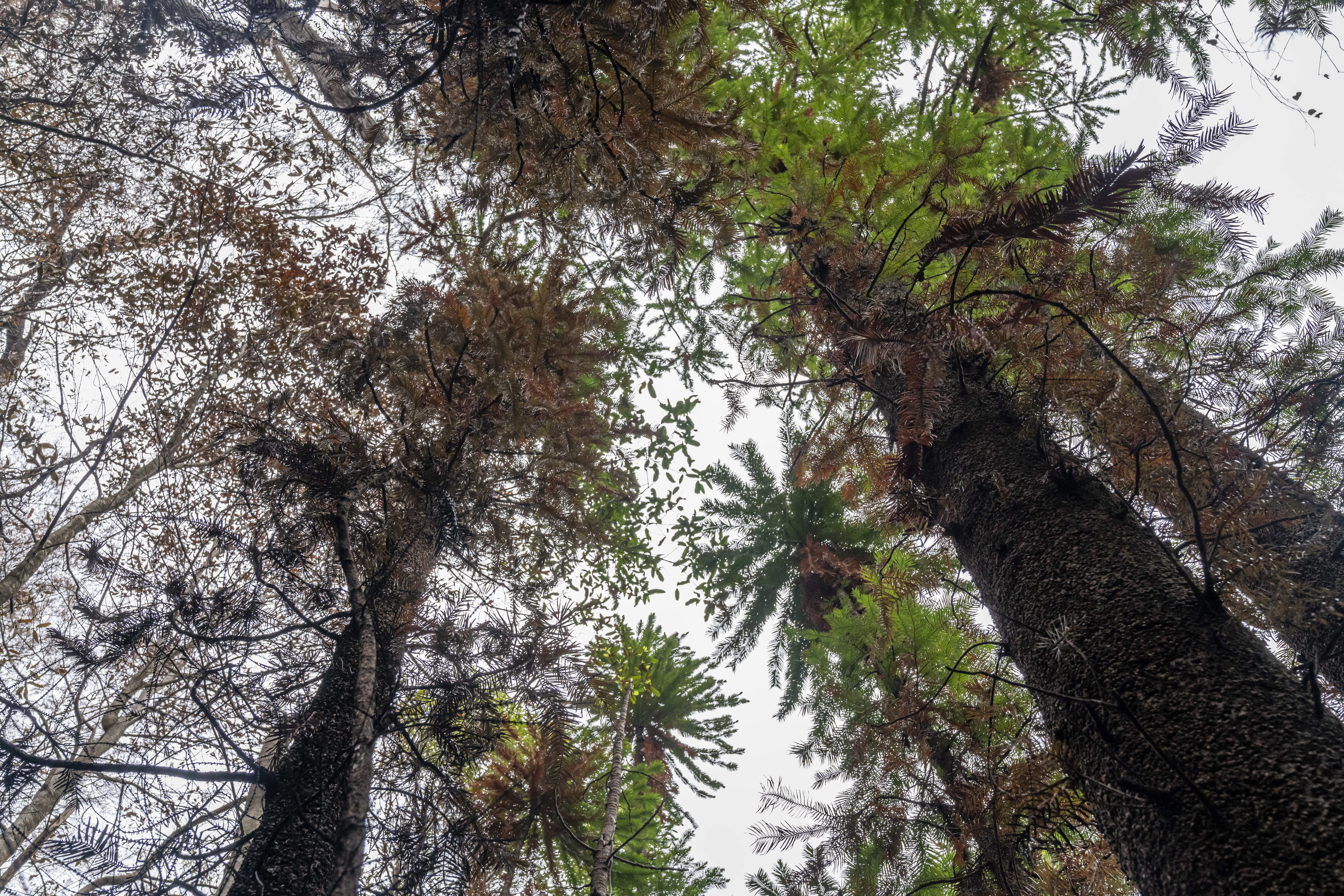 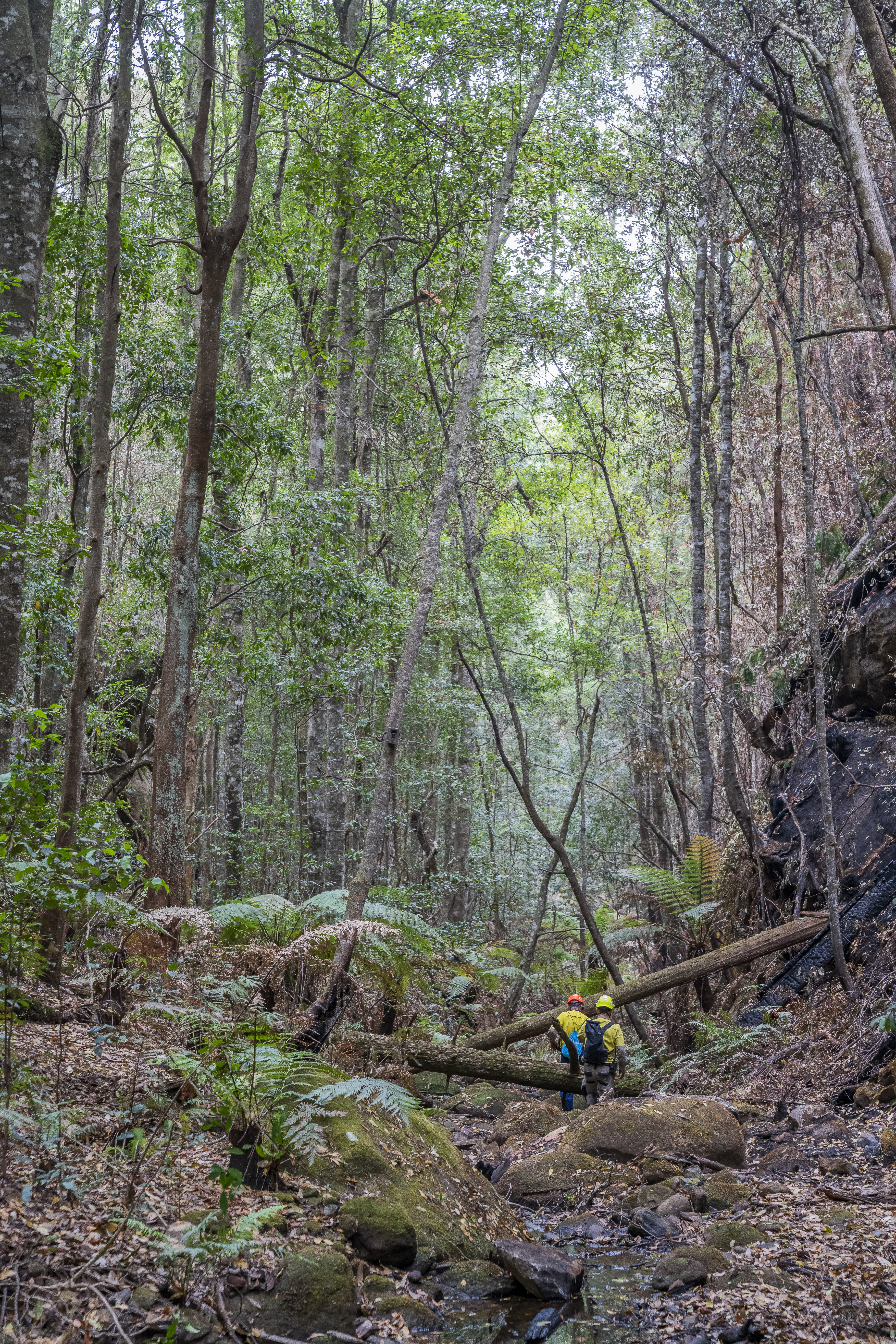 Believed extinct, the pines have clawed their way back

Director of Park Operations for Blue Mountains National Parks and Wildlife Service David Crust has been managing the species for over 20 years. He told 9News.com.au that this is really the first time a mission of this scale has been enacted to save the species.

"There's been fires in the general area of the pines previously, but we've never had a situation where the pines were likely to be impacted," he said. "The irrigation system actually got burnt during the fires so we'll need to replace it. We really hope there isn't another fire soon. For the pines to fully recover we would need to keep fire away from the site for a significant time."

The tiny remnant population of trees was discovered in 1994 by chance after David Noble, a ranger with the NPWS, stumbled on them and took a fallen branch for identification.

Millions of years ago, vast forests of Wollemi pines swathed Australia, New Zealand and Antarctica, but prior to Mr Noble's discovery, the pines were believed to be extinct.

If a fire was to threaten the species again, Mr Crust said they'd do everything they could to save them. However, one of the most pressing challenges remains keeping the location of the trees secret. "Asides from fire, one of the biggest threats to the Wollemi pines is people coming into the site, where they can trample seedlings but more importantly – there's a high risk people would introduce diseases, like soil pathogens, and that could have a devastating effect to the population," Mr Crust explained.

"We have been very, very careful to keep the site location confidential. It's actually an offense to visit the site, there are significant penalties for people who access it illegally. 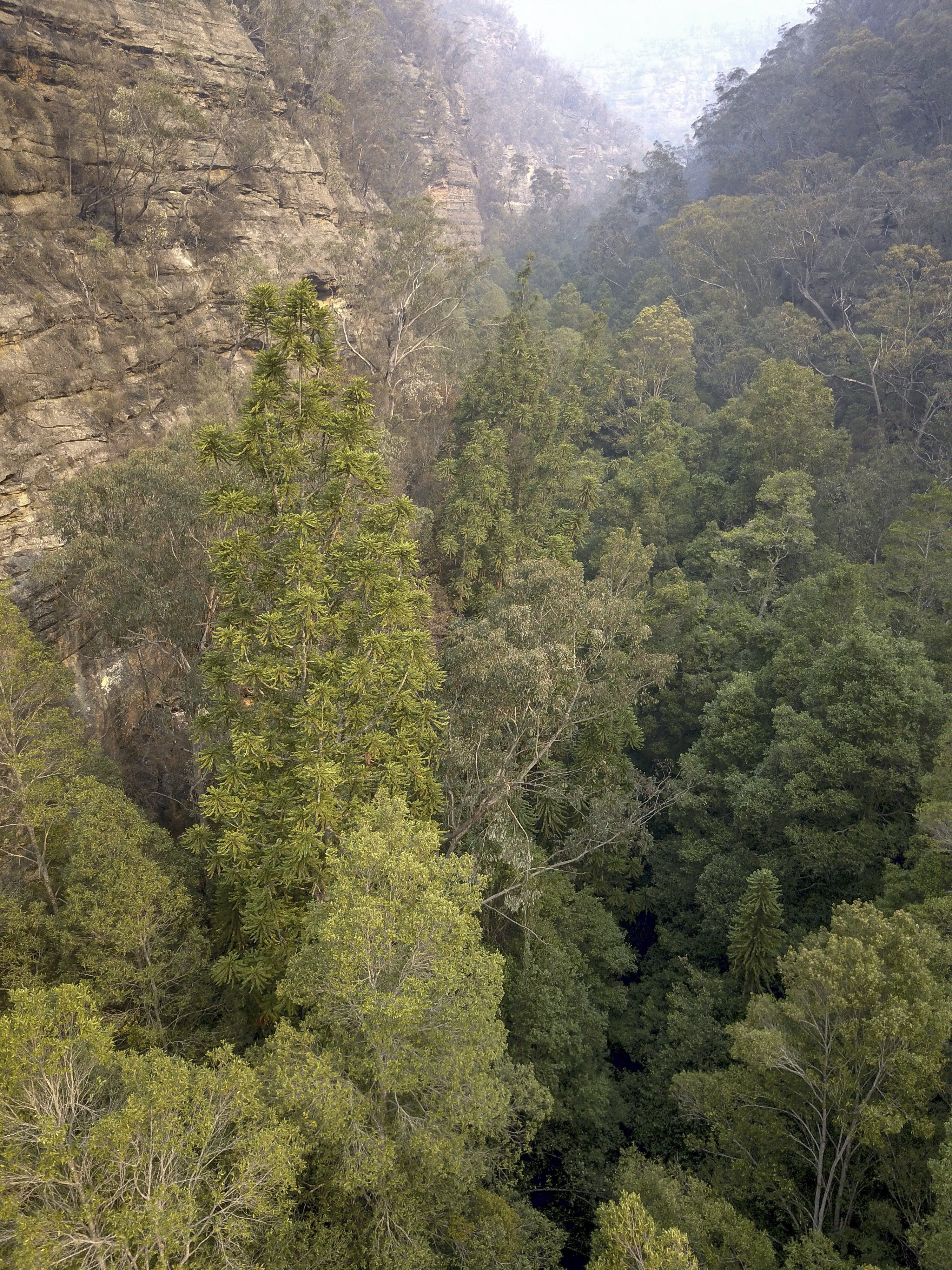 In a bid to conserve the species the NPWS has propagated the species and distributed them to botanic gardens and commercially.

"We encourage people to grow them, they've been made commercially available and now there are Wollemi pines being grown in gardens all around the world. If you buy one and put it in your garden, you'd be helping to save and conserve the species," Mr Crust said.

Last week, it was announced the Gospers Mountain megafire, which was started by a lightning strike on October 26, had officially been contained.

It is estimated to have destroyed more than 512,000 hectares of bushland.