Photos by Jah GreyNenookaasi Ogichidaa, Ojibwe, or “hummingbird warrior,” is a two-spirit powwow dancer who is Black, Ukranian and Ojibwe, a First Nation based in Canada and the U.S. Two-spirit is an umbrella term that Indigenous people fro… 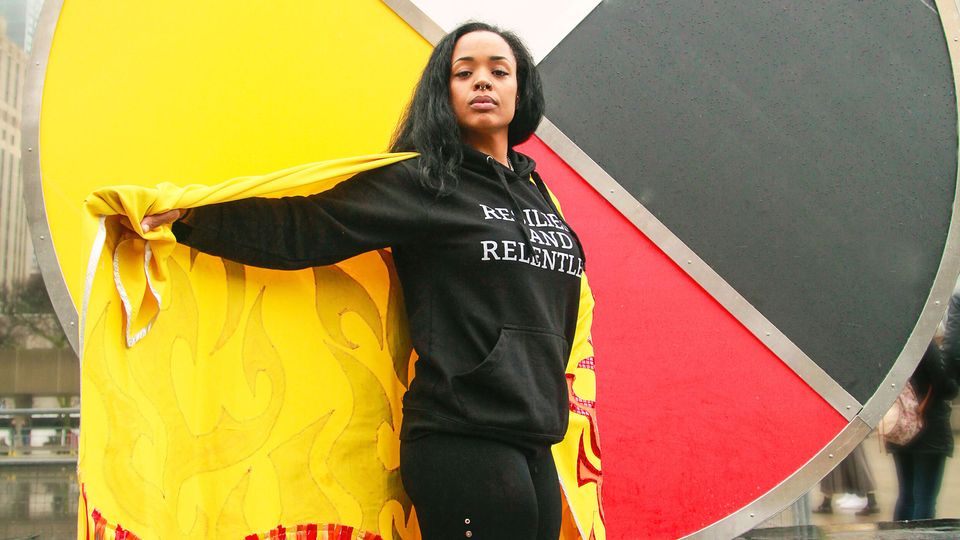 Nenookaasi Ogichidaa, Ojibwe, or “hummingbird warrior,” is a two-spirit powwow dancer who is Black, Ukranian and Ojibwe, a First Nation based in Canada and the U.S.

Two-spirit is an umbrella term that Indigenous people from North America use to describe their place on a spectrum of genders and sexualities. Neno goes by two sets of gender pronouns: they, their and them, as well as she and her. For Neno, it was important to be identified by those pronouns as they navigate the world.

TORONTO — When Nenookaasi Ogichidaa dances fancy shawl, it’s like watching a butterfly in flight, looping and spinning through the air.

Nenookaasi, or “Neno” for short, wear a yellow shawl, blooming with fiery wings that trails into fringes. On their feet are handmade moccasins, decorated with flames and enforced with reclaimed leather from couches dumped curbside.

A nearby Chinese lion dance performance begins and the sound of the pounding drums carry. Neno takes off in circles. The butterfly spins.

“I missed this so much,” they say.

Neno is dancing in front of a Medicine Wheel outside Toronto’s City Hall. A recent addition, the wheel is a tribute to Indigenous peoples living on the land now known as North America. For First Nations and Inuit communities, its four colours symbolise, among other things, the emotional, spiritual, mental and physical components of wellbeing.

Neno describes dancing as their medicine work and the joy it brought was essential to their recovery from a car crash in 2009.

Under their shawl, they wear a pullover hoodie. Across their chest are the words, “Resilient And Relentless” ― words that Neno embodies. Depending on how you meet the 37-year-old, you’ll see a different side to their resilience. How you refer to them may change, too. Neno looks at gender pronouns as descriptors of responsibility.

There’s the powwow dancer who blazes through gender norms. The mental wellness navigator who works with Black and Indigenous communities in Ontario. The artist standing alone on city streets at night. The queer woman in love, who gushes over her wife and three kids (four, if you count Ra, the recently adopted puppy who joins us for the day, too).

“Being two-spirit, it’s not about gender roles. It’s about the responsibilities that we play. And sometimes those responsibilities, ‘they’ is appropriate,” Neno says. “When I’m doing advocacy as a woman, that’s really important.”

Two hours before their dance, our interview starts at an urban conservatory in Toronto that’s open to the public year-round. It’s one of Neno’s favourite places, and it’s here that I am introduced to the activist, who stands their ground.

“This is your place of [work], I understand that. But this is a public place paid for by taxpayers,” Neno points out. “We’re having conversations right now, we’re allowed to do that.”

Around us, several unbothered visitors snap photos of tulips and palm trees with DSLR cameras—professional photography is barred without a permit on city-owned property. Given the unfairness of the scrutiny, I ask if Neno wanted to leave.

“No, let’s keep doing this. I can’t pause every time somebody else is feeling uncomfortable around me,” they say.

Neno regularly encounters the uncomfortable. As a person of mixed heritage, they’ve struggled with their sense of self. Growing up, they were estranged from their Ukrainian roots and were the only mixed person in their Jamaican family. “Whitewashed,” was what people called them when they spoke. When Neno started coming to Indigenous community gatherings, they weren’t seen as someone who belonged. They took to referring to their identity as “Black-Nish” (Nish referring to Anishinaabe—a collective term for culturally related First Nations in Canada and the United States).

“Folks would ask, ‘How are you native?’ I would say, ‘My left toe is native.’ I’m tired of explaining and going through my genealogy tree,” they say. “We know a lot about slavery, we know a lot about Indigenous genocide and colonisation. But we don’t talk about how they merge with each other.”

“Through the Americas, across Turtle Island,” Neno says, referencing an Indigenous term for the continent that predates North America, “There’s Black Indigenous people. It’s [hardly ever] talked about.”

Neno’s plurality as a Black Indigenous person of Ukrainian descent is something they refuse to stifle. That extends to their two-spirit identity.

As Neno told HuffPost Canada, they didn’t like powwow’s gender confinement: men and women are expected to only perform certain dances, wear certain outfits. Their hopes to show their fluidity between gender responsibilities by wearing both male and female regalia were dismissed.

Over time, Neno realised the binary world they were forced into didn’t promote their wellbeing. Their medicine wasn’t sitting right. So they stopped dancing with much of their regalia; refused to wear a dress again; retired their beadwork; took the eagle feathers out of their hair. The last time Neno danced in full regalia to the big drum was three years ago.

“It’s been really hard,” Neno admits. “That’s when my spirit is most free.”

In the face of this discouragement, it would be easy to shy away from taking up space in various communities. But that’s not an option for Neno. They gravitate to work that is healing and difficult. It became their calling to be visible for those yearning to be represented; unabashedly Black-Nish at all times.

At the Black community health care centre they work at in an east-end borough of Toronto, Neno stocks the four sacred medicines — tobacco, cedar, sweetgrass, and sage — in front of their office. They sit on several advisories consulting on race and health, including a two-spirit advisory that gives counsel on ceremonial protocols for Pride festivals across Canada. They founded Izhishimo, a nonprofit program that teaches Indigenous two-spirit individuals about powwows and how to make their own regalia. Recently, they hosted their first outdoors powwow in Toronto’s Malvern neighbourhood, home to many Black and Indigenous residents.

READ:  How To Improve Your Posture With Small, Day-To-Day Changes

Neno is still envisioning what their complete two-spirit powwow regalia will look like. It’s a large task, as regalia tells the story of its wearer and confers what roles they inhabit. Until they can design an outfit that will capture the realities of their gender identity, Neno is diverting their energies to community organising and educating others about their cultures.

They don’t dance as often as they used to, but on occasion, Neno still spins. Their moccasins and shawl get plenty of love whenever Neno wants to spin with friends at social gatherings and powwows.

When they do, it’s hard not to stop and stare. Neno counts on that. It’s how they draw fellow Black-Nish folks close, knowing on sight they can share a kinship with the dancer.

“There’s this little girl who calls me ‘fire princess,’” Neno says, recalling one of their favourite faces to see at powwows. “It’s the cutest thing ever because one day she’s gonna want to move like that.”

“How beautiful is it that these little ones, they’re naturally feeling comfortable in their skin … they’re not experiencing what I have,” they say, referring to their experiences being visibly Black in Indigenous spaces.

Toward the end of our time together, Neno’s effect on Black-Nish youth is made apparent in Yonge-Dundas Square.

It’s Toronto’s busiest plaza and, for an hour, she’s hosting a pop-up exhibit of her art show, “#nuitpoc.”

Hundreds of artists take part in Nuit Blanche, an arts festival that transforms the city for one night every year. The event’s name means “sleepless night,” but literally translates to “white night.” #Nuitipoc is her unofficial contribution, with Indigenous people of colour (IPOC) taking centre stage.

For the past three Nuit Blanche festivals, she’s taken over York and Queen St. W., a street corner in downtown Toronto, with a social experiment that’s kindled visceral reactions. Hand-painted signs are covered in statements she has heard about her ethnicities. Throughout the night, she stands in front of them with focused eyes and arms outstretched, inviting observers for hugs and conversation. 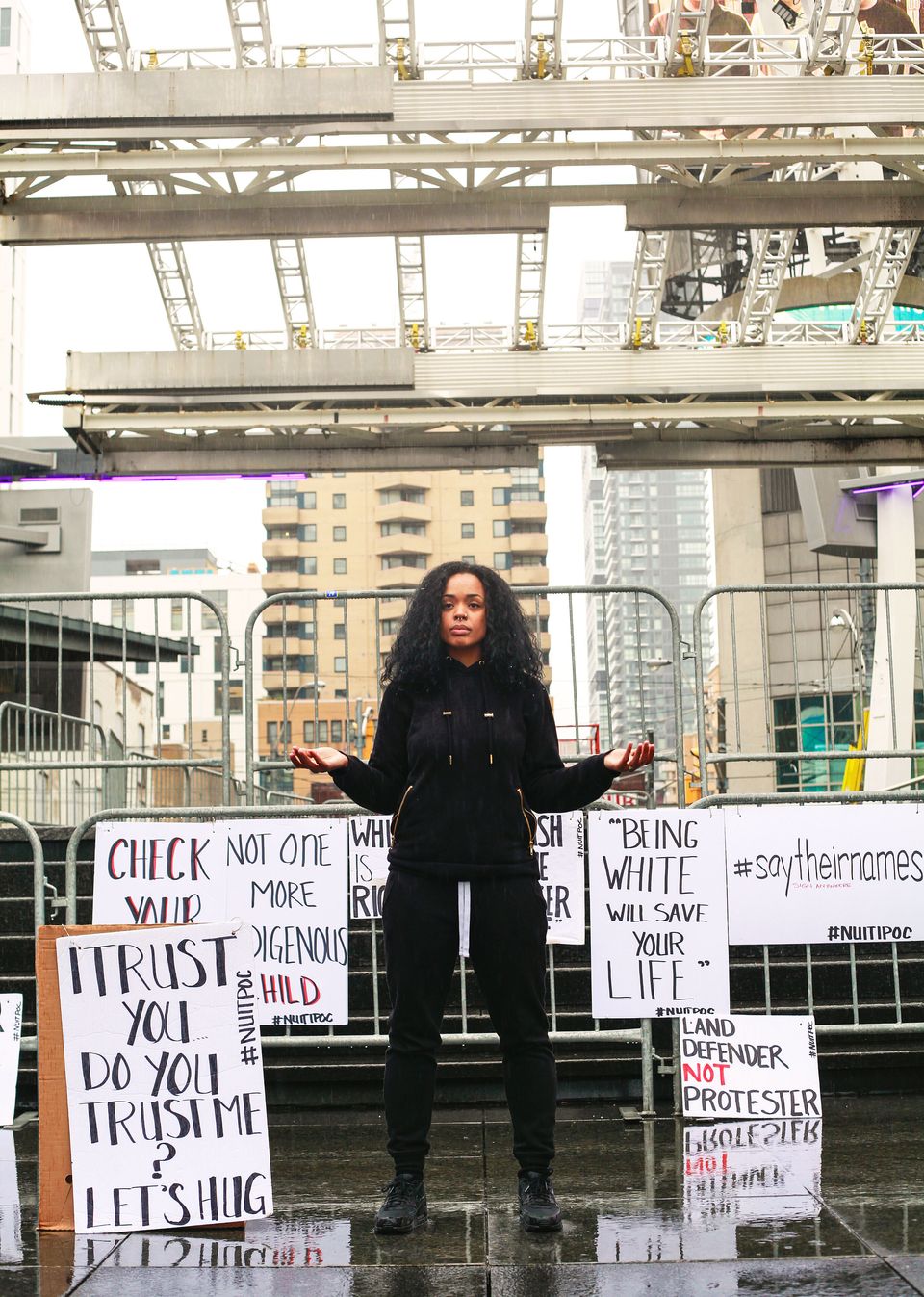 One sign reads, “Stop killing us.” Another says, “White is right.” That sign has visible shoe marks where onlookers have stomped. Neno calls them “panels of truth.” Unsettled passers-by are compelled to watch.

Soon enough, an apparent stranger approaches the exhibit and calls her name. She looks puzzled, before breaking into a smile and greeting her old friend Dag. Behind him, a teenage girl waves hello.

The girl, Hel G-Taylor, watches the Hummingbird Warrior with a look of appreciation on her face. She tells me she’s just like Neno. As a Black youth who is Métis, Cree, and Mohawk, she struggles with being seen as “native enough.” She asks Neno for support getting access to Indigenous youth programs.

“[Neno] looks deeper and she brings it up to the surface. She wants people to know what is going on,” Hel says.

After the two leave, people begin to interact with Neno, conversing about the messages they take away from the signs. Some have strong reactions.

With a raised eyebrow, one man draws close to Neno. After a brief conversation, he leaves.

“At first when I saw it, I thought it was a far-right thing,” the man says. “But then I started looking at it [Neno’s signs]. People are thinking these things [statements] all the time.”

With so much done in service of community-building, questioning authority, and provoking thought, Neno finds free time sparse. What little she does have, she spends with family.

“I’ve lived a life where struggle is just the reality,” she says. The do-it-yourself mindset was all she had known. Her wife, Yvonne, changed a good part of that. 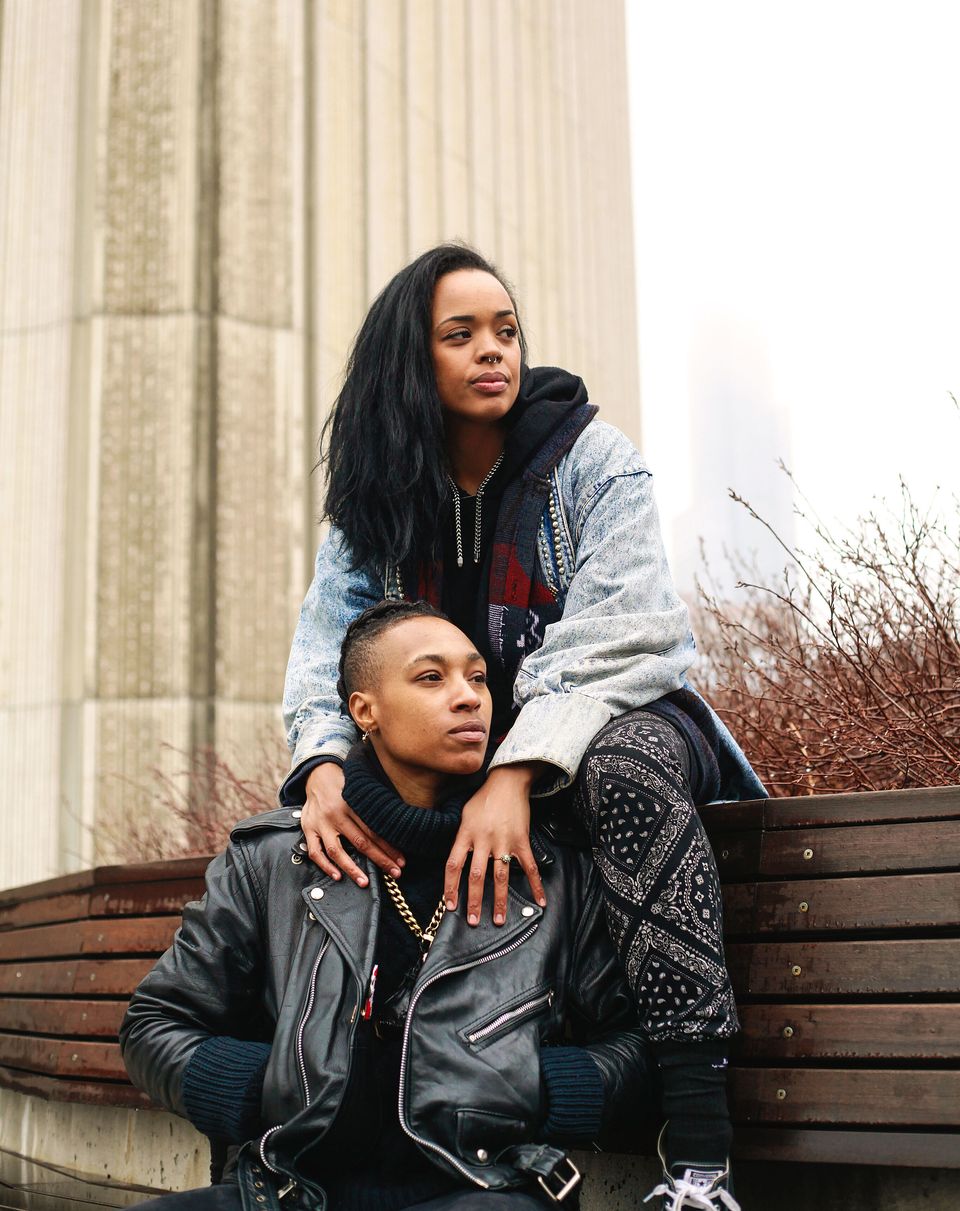 Yvonne carries herself with a quiet steadiness. She’s supportive of her partner’s endeavours, while reminding Neno to take it easy when she can. Throughout the day, she’s been there when Neno needed her, taking the puppy when it yips for walks and carrying posters around town.

They first met 15 years ago, and then re-connected shortly after Neno started to date as a polyamorous person.

“This is all new, for both of us,” she says. “It took me a long time to understand the difference between [connecting with] people and being labeled as a cheater or greedy.”

While exploring polyamory brought Neno happiness, sometimes connections fell through. Yvonne lovingly supported Neno after a painful disconnect with another person Neno was dating. In turn, Neno is there to amplify Yvonne, the first to credit her wife for slowing down her tempo and making the relationship sustainable.

One might think her love life wouldn’t hold pertinence to her work or dancing. For Neno, they’re one and the same. Being visible in all that she is and unsettling the status quo carries over into who she loves. Her goals are to go beyond Canada and work in queer rights activism globally.

“I can kiss my wife right here, right now,” she says. “No one would give two shits. But in many parts of the world, people don’t even have the freedom to voice attraction to the same sex. I want to exercise this as a right for all human beings.”

When asked what she’s most proud of accomplishing thus far, Neno gives two answers. The first was stability, a gift given to her by Yvonne, loved ones and allies. The second?

The article is part of HuffPost’s Proud Out Loud project, which profiles the next generation of LGBTQ change-makers from around the world.