Wintry winds, showers, small hail and highland snow are forecast for the southern states this weekend following a day of record-breaking lows in yesterday.

Wintry winds, showers, small hail and highland snow are forecast for the southern states this weekend following a day of record-breaking lows in Victoria yesterday.

A front will bring the icy weather to South Australia, Victoria, NSW and the ACT today and tomorrow.

Later into the day, cold winds in the wake of one front, and with another, will bring gusty showers to the southeastern SA, Victoria, Tasmania and southern NSW.

Troughs are generating warm winds in eastern Queensland & the tropics, showers and storms in the Top End & the odd thundery shower in WA.

A high is keeping much of the interior dry.

Here is the state-by-state forecast for Saturday, September 26, 2020:

Mostly sunny, with a chance of patchy morning fog about central coastal districts. Maximum and minimum temperatures below average in the southwest, tending near or above average elsewhere. Highs of 31C from Cooktown down to Townsville and 26C in Brisbane.

A few showers about the southern and central ranges and adjacent western slopes, more frequent about the Alps.

Snow falling on the southern and central ranges above 700 metres at first, increasing to above 1000 metres by the afternoon and mostly clearing by evening.

Conditions will be mostly dry elsewhere.

The cold front moving across the southern states will bring below-average temperatures to a number of areas, including Orange which is only expected to reach 6C today.

The far northeast will escape the icy conditions, where it's forecast to reach 24C in Lismore and Grafton.

Snow is a possibility in the ACT today with a top of 11C in Canberra.

West to southwesterly winds, fresh to strong in the east.

Victorians have been left shivering by an Antarctic blast that swept across the state, bringing significant snowfalls and the coldest September day in more than half a century to the regional city of Ballarat.

Flurries began falling at Lismore, Lake Bolac and Ararat on Friday morning and then became heavier over the Otway Ranges.

The snow fell for a number of hours and even settled on the ground in parts of the region, including in Ballarat, west of Melbourne. Senior forecaster Miriam Bradbury said the city reached a maximum of 5.8C just after 4:00pm, after dropping to freezing during the middle of the day.

"It dropped in temperature to about 0 degrees at 1.30pm," Ms Bradbury said.

"Because it was so cold through the middle part of the day, when they [the snowflakes] fell as snow, they just sat on the ground and didn't melt," she said.

The cold temperatures will continue today with morning frost in the north. Showers and about southern and mountain districts. Local hail possible in the south during the early morning.

Showers falling as snow above 700 metres, lifting to 900 metres during the day.

READ:  ONE MILLION COVID-19 TESTS BUT NO ROOM FOR COMPLACENCY

A cool to cold day with moderate to fresh southwesterly winds. Temperatures in the early teens during the day and dropping to single digits overnight - highs of 13C in Melbourne and lows of 6C.

Mainly fine about the central north and the northeast coast.

Fresh and gusty southwesterly winds, strong about the southeast and the northwest.

Top temperatures of 9C in Queenstown, dropping down to 4C overnight. Highs of 13C in Hobart and 14C in Launceston.

A cold at start to the weekend with areas of frost over inland parts following a day of wind and snow yesterday, 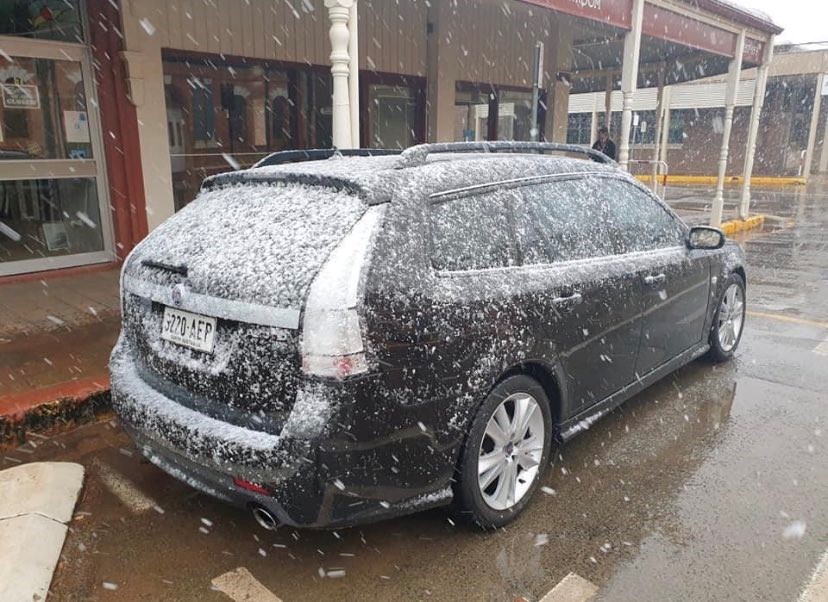 A cool day in the southeast, grading to warm in the northwest. Top temperatures of 25C in Ernabella and a cooler 15C in Adelaide.

Moderate southwest to southeasterly winds, tending moderate northeasterly in the west, fresh at times in the morning.

Chance of an afternoon shower or thunderstorm over the northeast Kimberley. Showers possible throughout the South West Land Division, southern Goldfields, Eucla and the South Interior.

Possible thunderstorms about southern and central parts of the South West Land Division, southern Goldfields, south Interior and the Eucla.

Temperature should reach 35C around Newman and Broome Airport, while it will be markedly cooler in the south with tops of 19C in Bunbury and Wellstead.

A medium to high chance of showers and thunderstorms over the northwest Top End.

A slight to medium chance of showers and thunderstorms elsewhere over the Tiwi Islands, Daly, western Arnhem, Gregory and northern Tanami Districts. Thunderstorms may contain heavy falls during the early morning.

Partly cloudy over central districts and clear elsewhere. Temperatures of 27C forecast for Alice Springs and warming up to 33C for Darwin.