There was a time when I made everything from scratch. From enchilada sauce to salad dressing, I wouldn’t be caught dead cracking open a jar in my kitchen. Fast forward to today, and I’m a new mom who has found myself purchasing ingredients …

There was a time when I made everything from scratch. From enchilada sauce to salad dressing, I wouldn’t be caught dead cracking open a jar in my kitchen.

Fast forward to today, and I’m a new mom who has found myself purchasing ingredients only to let them perish in the fridge when the thought of cooking is too daunting. The mental labor that goes into planning meals, let alone actually cooking them, has pushed me to order UberEats more times than I’m comfortable sharing. That is, until I realized that using shortcuts can be just as delicious without being detrimental to your health goals.

One of Moore’s favorite shortcuts is rotisserie chicken. Homemade roasted chicken is delicious and relatively simple to make, but time consuming. A rotisserie chicken, on the other hand, is relatively affordable and prepared with minimal ingredients. I buy a rotisserie chicken ahead of the workweek and shred it up. That way it’s ready to go when I’m making a dish (like enchiladas) that requires plain cooked chicken. 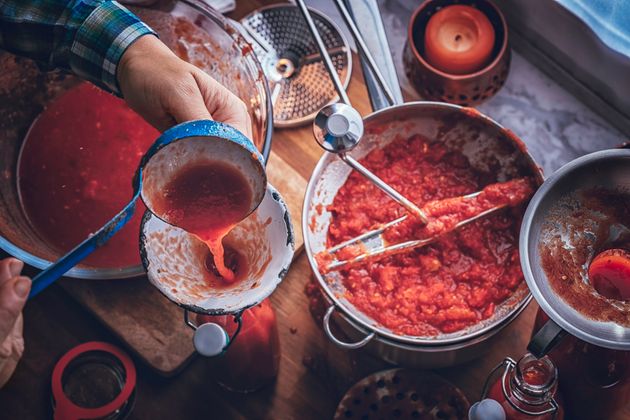 In the same vein, Moore also suggests keeping cans of beans on hand. “Even though it’s easy to pressure cook beans in an Instant Pot, or to put them on the stove and cook them, canned beans are ready whenever you are,” she said. If you’re worried about sodium, choose low-sodium beans and rinse them off before preparing. Moore also recommends keepingcanned tomatoes on hand, since they’re excellent timesavers in chili and soups.

When it comes to fruit and vegetables, there’s no shame in buying them frozen. “Frozen fruit and frozen vegetables can actually have a little more vitamin C often compared to fresh because they are frozen right there,” Moore said. “They’re picked right at the peak of freshness or ripeness and they’re frozen right away. So it stops the nutritional loss process.”

When I realized it was just as nutritious to purchase frozen cauliflower rice as it was to buy a head of it and run it through the food processor (a messy undertaking), it became a lot easier to stick to my low-carb goals.

Even chefs like to use shortcuts in their home kitchens. Bravo’s “Top Chef” alum Katsuji Tanabe recently openedHigh Horse in downtown Raleigh. His restaurant is centered on live-fire cooking, but when he is home with his wife and two children, he’d much rather spend less time in the kitchen and more time with them.

One of Tanabe’s favorite shortcuts is repurposing leftovers. Leftover pizza crust, for example, gets cubed and toasted and used as croutons in a salad the next day. “Not only is it a shortcut, but it gives something a second life,” he said. On the rare occasion that the family gets fast food, leftover fries are tomorrow’s breakfast when baked and jazzed up with an egg.

Both Moore and Tanabe are unwilling to make certain shortcuts, though. For Tanabe, it’s chicken broth. “Making your own chicken broth is easy and so much better than the store-bought kind,” he said. Using leftover chicken bones, he makes his chicken broth on the salty side and then freezes it in ice cube trays for future use. If you’ve ever had to dump out a carton of broth because you only needed a half cup of it, then you should definitely try the ice cube trick and never waste broth again.

Moore finds that salad dressings are worth making from scratch. “Salad dressings are so easy to make, and it’s very hard to get that same fresh pop of flavor that you would get from fresh lemon juice or fresh lime juice that you would get in a bottle,” she said. If blitzing some ingredients in a blender to make salad dressing sounds like a hassle to you (it often is for me), a quick fix is whisking some olive oil, vinegar, mustard and honey together in a small bowl.

But if twisting off the cap of a dressing bottle is what sounds easiest, don’t sweat it. “They do have some really good bottled dressings,” Moore said. “You might want to check the refrigerated section to see if you can find one that tastes a little bit fresher.” If you’re lucky enough to live near a Trader Joe’s, check out their line of vegan dressings, which only have about five ingredients and 60 calories or less per two-tablespoon serving.

Once I started using more shortcuts to prepare my meals — from high-quality spaghetti sauce to 90-second microwavable bags of rice — I started to love cooking again. And it gave me more time to hang out with loved ones. Funnily enough, no one seems to notice that I didn’t spend hours prepping and cooking in the kitchen.

READ:  COVID-19 has gutted global tourism and it's costing Australia $10b every month
Shares
Share This
Finance Advice 2021