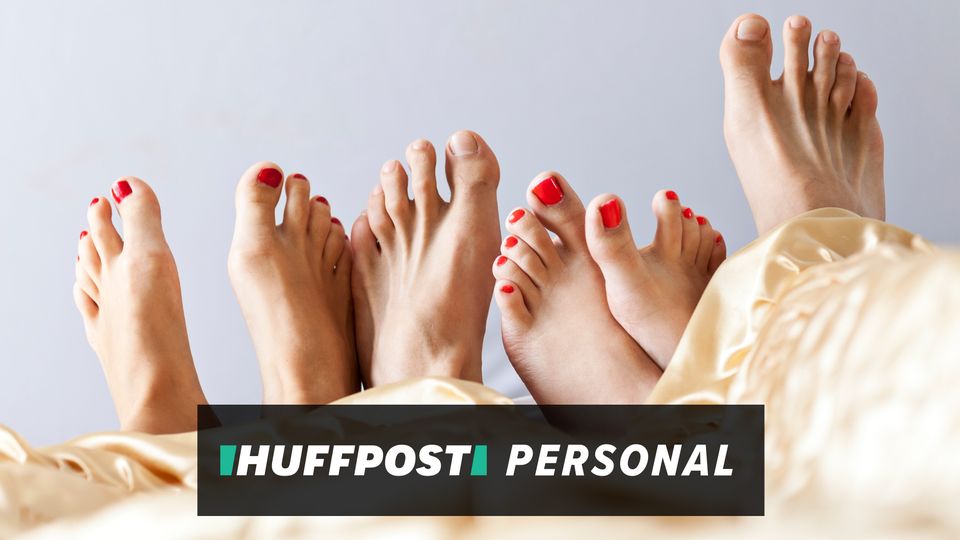 You’re reading How To Get Off, our series celebrating bodies, pleasure and fantasy.

Then, about 18 months ago, I started writing about sex for a living and my thinking started to change. I was meeting amazing people, amazing women mostly, who were exploring their sexuality in unapologetic ways, doing things that society told them they shouldn’t be doing and laughing at the haters. It was impossible not to admire them.

So I started up the conversation again. My partner and I talked very honestly about our worries and boundaries, whether we should meet another man or another woman, and how we’d go about finding someone. We decided I’d take the lead, so I joined Feeld – an app that’s been called ‘Tinder for threesomes’ – and, for the first time in years, started going on dates again.

We wanted to meet somebody we could call a friend. After a few underwhelming dates, and a few outright disasters, I met Katie.

I didn’t just invite home the first woman I met – we’d decided we wanted to make a real connection with somebody, and the idea of anonymous sex doesn’t do it for either of us. We wanted to meet somebody we could call a friend. After a few underwhelming dates, and a few outright disasters, I met Katie (not her real name) and knew this time it was different.

Katie was immediately warm and easygoing. She was experienced in dating couples too, so there was no awkwardness. On our first date we sat in a sunny beer garden and talked about everything from our jobs and our pets to ethical non-monogamy and feminism. Katie asked me if my partner and I had discussed any boundaries or worries. The subtext was obvious: she wanted to check I wasn’t just going along with some porn-fuelled heterosexual male fantasy. Us, as women, being active agents in this experience, was the single most important thing. And that felt great. The more we talked, the more it became obvious we were on the same page. When Katie got up to go to the bar, I sent a text to my partner who was at home: “She’s fucking awesome.”

We went on a few more dates, sometimes just me and her, sometimes with my partner too. Then one evening, we invited Katie over to our place for dinner. That evening, I prepared the same way most women would when they think they’ll be sleeping with someone for the first time (shaved my legs, bought some nice new underwear). My partner took care of dinner, preparing his signature Mediterranean lamb dish.

As the three of us drank some red wine with dinner – there was a tacit understanding between us that getting drunk was a bad idea, so we took it steady – I’d be lying if I said I wasn’t nervous. I was still worried about jealousy. We’d all kissed by this point, and that had been fine, but would sex be different? I’d tried picturing it, but I realised I wouldn’t know how I felt until it was really happening.

After dinner, we all moved over to the sofa. Katie, perhaps intuiting my nervousness, made the first move, taking hold of my hand and asking if it was okay to kiss me. After that, everything just sort of fell into place. Almost immediately my nervousness fell away. I was aware of having made an active choice to live differently and say, ‘fuck it, I can do whatever I want.’’ It was a new feeling of complete freedom. In a moment I’ll probably remember for the rest of my life, Katie seemed to read my mind. She winked at me covertly, as though to say: ‘I know, right?’

In the bedroom, I experienced no jealousy at all. In fact, the extent to which I wasn’t jealous surprised me. I can only think this is because we’d all discussed things so openly – I trusted my partner and I trusted Katie. We’d all agreed on one rule: that everyone be equally involved and equally enjoying the experience. Communication didn’t shut down during sex, we checked in with one another, at times we laughed – we even took a break to make tea. Like all good sex, it was a million miles away from what mainstream porn shows us. And there was no ulterior motive, we were all there for the same reason: to have a great sexual experience.

When I thought that I wasn’t ‘the sort of woman’ who had threesomes I was buying into the misogynistic idea that a woman’s sexual experiences define her.

Women are encouraged to see one another as threats. As competition, particularly for attention from men. My fears about sexual jealousy, I realised, came from this same place. But Katie doesn’t want to ‘steal’ my boyfriend. She’s a fiercely independent, driven woman with her own shit going on. If she wanted a partner, she’d have one. More than anything, this experience helped me to really admire and lift up other women and refuse to see my fellow women as threats.

In the past, I had ingrained beliefs that I hadn’t even realised were there. When I thought that I wasn’t ‘the sort of woman’ who had threesomes I was buying into the misogynistic idea that a woman’s sexual experiences define her. Katie, and the other fabulous women I’ve met along this journey, have empowered me to challenge that. To be clear, I’m not saying all women should have threesomes – it might not be for you, and that’s completely fine and your decision. What a woman wants to do, or not to do, in her sex life, comes down to one person: herself.

But, for me, this experience has helped me to see myself, my relationship, and other women, in a healthier, happier and stronger way. If I have one regret, it’s that I didn’t do this sooner.

Have a compelling personal story you want to tell? Find out what we’re looking for here, and pitch us on ukpersonal@huffpost.com

How To Get Off is our answer to Valentine’s Day, celebrating bodies, pleasure and fantasy – whatever your relationship status. We’ll be exploring what really gets us off in 2020, looking at sexual awakenings, toys and erotica, and real-life experience.