I put on red lipstick in the hotel bathroom before slipping out of my bandage dress. I remember thinking that it was a good idea to wash my sleeping pill down with champagne in case I didn’t feel like getting up later on. The last thing I remembe… 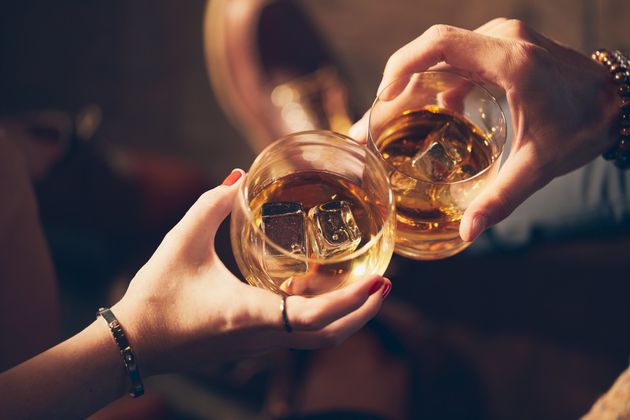 I put on red lipstick in the hotel bathroom before slipping out of my bandage dress. I remember thinking that it was a good idea to wash my sleeping pill down with champagne in case I didn’t feel like getting up later on. The last thing I remember after that is walking into the hotel room, completely naked except for my heels and lipstick, and announcing that I was ready.

I’m told that my boyfriend (who later became my husband) carried me down the elevator in my white, terrycloth hotel robe, through the Mondrian lobby, and into a waiting car. But I remember none of that as I didn’t “come to” until the older, white, ER doc started shaking me gently and saying my name over and over again. “How much have you had to drink tonight?”

I remember forcing myself to keep my eyes open, even though all I wanted to do was go back to sleep. I heard myself admitting to the doctor that I’d had a few drinks and that I’d taken a 10 milligram Ambien before I got in bed. I was slurring heavily ― I sounded like someone I didn’t know.

“Ambien?” That’s my boyfriend’s voice. He sounds both shocked and disappointed.

“How many drinks?” The doctor sounds slightly impatient.

“Five or six,” answered my boyfriend.

Mortification starts to penetrate through the sludge that had filled my brain. Apparently, I’d passed out during the act for which I’d been drinking to prepare myself.

Three out of four women say that they prefer to drink before having sex because it makes them feel more confident about their sexuality and lowers their inhibitions. In other words, once buzzed, many otherwise passionless women can finally get their freak on. And 14% of women polled in a 2019 survey said they cannot sleep with their significant others without drinking first. I placed myself firmly in this class.

I’d overshot the mark before, but never by this far. Until recently, it’s been pretty easy ― he and I would go on a date, get comfortably drunk and then have sex ― it was all very civilized. But lately, he’d been trying to seduce me after the movies or lunch when neither of us had so much as a buzz. I am quietly terrified that he’s getting tired of our unspoken, sex-only-after-drinking agreement. I have a vague idea that normal people don’t need to be lit to crave their partner, but I thought that maybe the reason he and I are so good together is because he seemed to like our “arrangement.”

But it has become apparent to me that there is a marked difference between us ― while he enjoys partying before we have sexy time, I need to party to get myself in the mood. And now that I had basically overdosed and taken this shameful trip to the ER, I know that “party dates” for us are in the rearview. This means that when we have sex from now on, I’ll be working without a net, as he’ll be monitoring me to make sure that something like this never happens again.

I’ve been drinking like a lady in front of him since our wedding four years ago. But I’ve been supplementing my before-sex-booze with the occasional Vicodin (harder to detect than alcohol, easier to hide). It’s been almost two weeks, though, since I’ve been able to get my hands on any pills and I’m hoping he will be too tired to notice my frigid state when he gets home from work tonight. I put our two sons, ages 1 and 3 to bed, and try to keep myself busy until it’s time for me to take my sleeping pill and knock myself out. When he gets home, he walks right past me and flings the refrigerator door open without looking in my direction.

“The kids already ate, but I can make you something,” I say.

I am exhausted from pretending all of the time. My hands are shaky as I reach around him to remove the large piece of salmon from the dairy shelf.

Later on, after checking on the boys, I try to slip into our bed unnoticed. But his breathing gets softer when I pull the covers back.

I try not to stiffen as his arm comes across the bed toward me. I bite my lower lip to keep myself from flinching as his fingers move quickly, finding the flat plane of my stomach under my pajama top and glide curiously along the surface.

After 30 seconds or so have gone by, I can’t stand it anymore, and I sit up (as casually as possible) to grab the remote from my nightstand.

“Hey, do you mind if I turn the TV on?” I hate the way my voice sounds, small and pleading like our 3-year old when he wants to crawl into bed with us in the middle of the night.

He stares at me hard, his brown eyes are alive with something I can’t read. Resentment? Frustration? Then he sighs heavily before turning the other way.

I close my eyes, exhale noiselessly before turning away from him and facing the television.

I wasn’t surprised when we ended up getting a divorce.

After all, what man in his right mind would want to stay married to someone who avoided sex at all costs? And although it destroyed me to leave our boys ― even for a little while ― I accepted the fact that I needed help. So off to rehab I went and proceeded to spend the most excruciating 27 days of my life.

My after-care pamphlet said to expect some intense feelings of loneliness or vulnerability upon returning to my “home environment.” I was so uncomfortable without booze or pills or any of the things I used to escape before that I felt like I didn’t know how to do anything anymore. And at night, after I put the boys to sleep, I would be hit with an intense feeling of malaise that made me long for anything that might take the edge off.

Meeting Scott took me off guard.

He was a fly-fishing guide from Utah who’d moved to Los Angeles to get sober. He and I hit it off in that instant, bubbly, woozy way that usually means trouble. And I don’t want any trouble, I want to maintain my sobriety, be a mom to my kids, and have the best co-parenting relationship possible with my now ex-husband.

But being near Scott made me better understand the gravitational pull between the earth and the sun. I was fascinated by his blue eyes and blond soul patch. Just the idea of him made me want to dress sexier around him, find excuses to touch him ― I was twitterpated.

Our first time was in a random hotel room. I got undressed quickly and ducked underneath the maroon, paisley quilt while he was still taking off his shoes. I watched him as he took off his shirt ― he was talking a mile a minute, but I wasn’t listening. Instead, I was looking at his bare chest, which I was seeing up close for the first time. My eyes scanned down his thin, tan torso to his underwear. I was curious to see what lay beneath, but he got under the covers too fast.

This is my first time in a hotel room with a man without having first raided the minibar or just finished drinking at a real bar. When I feel the heat of his body next to mine, I start to panic, and am suddenly acutely aware of uncomfortably awake I am. I yelp under my breath when his feet touch mine, not because they are cold, but rather just because I can actually feel them. His watch is ticking next to my ear and makes me think of metronome ― or a bomb. I squirm away from him a little and fight an overwhelming urge to throw off the covers and make a run for the bathroom.

I can taste his Starbucks vanilla latte when he kisses me seconds later.

It isn’t our first kiss, but the first kiss in private, the first kiss that was going to definitely lead to sex. It seems unfair that sober people can’t have something, anything to buffer them during such an intimate time. I wish I smoked, had downed a Redbull or a bottle of chocolate syrup ― anything that would help shield me from being so aware of my nakedness right now.

All at once, I understand the term “raw sex” in a whole new way, not the carnal, 90’s Ol’ Dirty Bastard way, like “Ooh baby I like it raw,” but raw as in an exposed, open wound. I close my eyes as he leans toward me and brace myself for the worst.

It took at least a year before Scott and I could laugh at that night and marvel at the awkwardness of our newly sober selves trying to navigate sex those first few times. Scott is a patient, patient man, willing to be open and honest with me when it comes to sex. And 11 years later, he’s still showing me that it’s OK to ask for things, explain what I like and what I don’t like.

I’d really thought I was dead inside when it came to sex ― unsalvagable, damaged goods. But who knew that not drinking could actually be better for your sex life because it increases intimacy (once you get past all of that bumbling awkwardness)? And who knew I wasn’t dead inside, just dormant, like a willow tree in the winter?

Sober sex, for me, is a practice like everything else ― exercise, meditation, eating well. And like with any other practice, if you don’t use it, you might lose it ― and I’m not ready to lose this incredible gift that I’m still finding ways to enjoy.