The Wuhan coronavirus has dominated the news cycle lately around the world. My brother, Harry, and I had already planned a trip to Shenzhen, China, on Friday, January 24, to visit our parents over the Lunar New Year.We chatted with our parents about po…

The Wuhan coronavirus has dominated the news cycle lately around the world. My brother, Harry, and I had already planned a trip to Shenzhen, China, on Friday, January 24, to visit our parents over the Lunar New Year.

We chatted with our parents about postponing the trip. They told us that it would be hard for them to take time to spend with us in the coming months and that the risk in Shenzhen seemed low. Because of that, we decided to continue with our trip, while keeping an eye on the news.

We found a China unlike anything we’ve seen before, with a fascinating mix of calm and fear. Here’s a few snippets of life on the ground.

Everything the media broadcasts or the government does centres around coronavirus.

The government in China is all-encompassing: Power is centralized in a huge bureaucracy that emanates from the national Communist Party in Beijing.

Early on, the government was criticized for its slow response to the disease. But now, its response has swung so far the other way, it’s hard to keep track of all the measures it’s taking.

That last one is mind-boggling. Wuhan is a city of 11 million, and one of the 10 largest cities in China. Think of sealing Los Angeles off from the outside world. The fact that this is possible at all speaks to the strength of the state, for better or for worse.

Another really interesting manifestation of the power of government is the news. The coronavirus may be big news internationally, but in China, it’s the only news right now.

Here are some articles about the coronavirus from outside China. Most articles are factual, but somewhat sensational.

On the other hand, here’s a sample of Chinese domestic news at the top of QQ News and Today’s Headlines.

Now, many of you might roll your eyes at the propagandistic tone of the first article. But the other two articles are measured, fact-based articles with good advice and just the right dose of alarm. I’d take articles Nos. 2 and 3 over the international news pieces, which come with little science or practical advice attached.

To be fair, there’s similar articles in the American press like The Atlantic’s and Ars Technica’s excellent takes, but by and large, the news focuses much more on sensationalizing the numbers without presenting them in context.

Likewise, TV news aims to strike the right balance between alarm and assurance. The nightly news in Shenzhen is a prime example. Local news sources have not only reported on the increasing case count, but have also written stories about how many recovered patients have been released. Another local news report showed the reporter walking through the wholesale markets in Shenzhen and informing viewers that food supplies are sufficient.

While China’s tight control of the media has many pitfalls, it seems uniquely well-suited for keeping an epidemic under control.

On one of the tallest buildings in Shenzhen has been displaying projected text that reads “天佑武汉”, or “God bless Wuhan.” The nightly news shows Li Keqiang, China’s premier and second in command, rallying medical workers in Wuhan with cheers of “加油武汉” (“Keep it up, Wuhan!”).

Unfortunately, the on-the-ground situation is very different from the unequivocal support that the above would indicate. One night, as we drove into our xiaoqu (fenced “neighborhoods” into which all housing is organized in China), we rolled down our windows for our regular temperature checks. (What? Temperature checks? Read on — I’ll say more about this below.)

“Nobody’s coming from Wuhan or Hubei, right?” the night security guard asked and we replied in the negative.

In another incident in the same xiaoqu, our parents relayed how someone had seen a car with a Hubei plate parked there and immediately raised a ruckus on WeChat, the group messaging app ubiquitous in China. The xiaoqu staff quickly promised to investigate and report back.

What makes this unfair is that if you have a Hubei license plate, it’s possible you haven’t been to Hubei for years! But in this atmosphere of fear, if you say you’re from Hubei, you’ll be shunned wherever you are or kept a fair distance from anything or anyone. It’s extremely unfortunate that beyond just having to bear the worst of the disease, the people of Hubei and Wuhan have to live with a stigma that comes from where they’re from.

We see something similar happening in the U.S. with people who have visited China. Currently, outside Hubei, there have been 2,000 confirmed cases. Now let’s say that’s underreported by a magnitude of 10. Even 20,000 cases in a country of 1.3 billion gives you 0.001% chance that any single person has the disease. It’s not silly to take precautions, of course, but it is silly to assume every Chinese visitor or returning tourist is likely to carry the virus.

China’s a country of 1.4 billion people. But if you visited this week, you wouldn’t know it.

Even before we left San Francisco, the difference was obvious. The plane out of SFO was the emptiest we’ve seen — no more than a quarter of the seats were full. When we called United before our flight, they offered to waive the change fee if we wanted to change our dates; clearly, many others took them up on that offer. All the better for us, though! Harry and I each sprawled across a whole row of four seats to sleep.

Shenzhen itself was the same — eerily empty. We absolutely love dim sum, a Cantonese breakfast cuisine, so as soon as we got here, we headed straight to a dim sum restaurant in Ocean City, a local mall. The building looked almost abandoned. Escalators were stopped, stores shuttered, and lights dimmed. 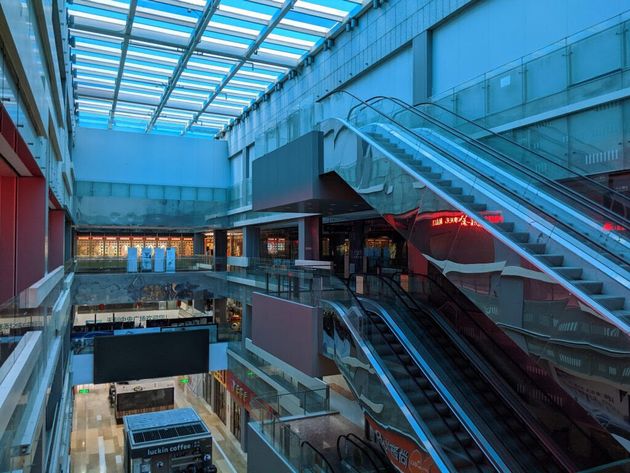 It’s partly just Lunar New Year itself — most commerce stops, and most people are at their ancestral hometowns (rather than Shenzhen, a modern boomtown) spending time with family. But even then, the New Year is China’s longest public holiday, and just like Christmas in the U.S., many would usually use the chance to feast with family. As a result, the restaurant itself was open. In a space that probably fits a few hundred people and would be bustling with diners any other year, though, only 10 tables were occupied.

Later, we visited Lianhuashan, the Central Park of Shenzhen, with a hilltop plaza overlooking the city and a large field for flying kites. The field, which normally would be chock-full of families, was sparse and less than a quarter full. Roads were so free of traffic that when we asked a seafood restaurant’s staff where to park, they told us to just park on the sides of the two-lane boulevard — a clear violation of normal traffic rules. And for good reason, too! We didn’t see a single car go down that street the whole 10 minutes we were outside. 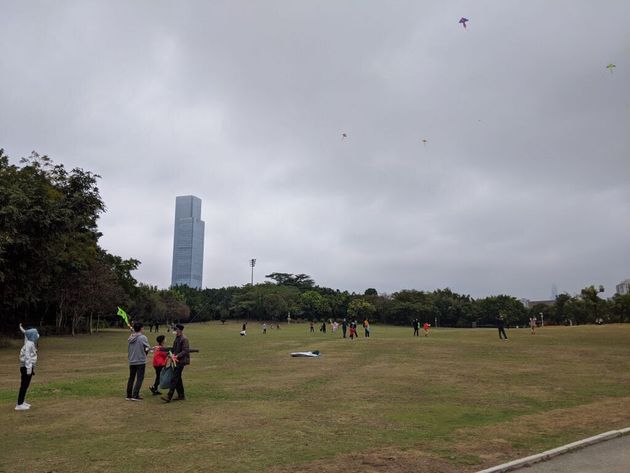 We didn’t come half a world away just to stay inside all day, so we headed outside to parks and shops. And to be clear, it’s not like there’s nobody around, zombie-apocalypse, “28 Days Later”-style. There’s simply a lot fewer people than you’d expect for a city of 10 million.

For example, when we visited Lianhuashan, the park had its fair share of visitors, but almost everyone wore surgical face masks, even as they huffed and puffed up the hill. Later, when we went to Walmart, absolutely everyone was wearing masks. 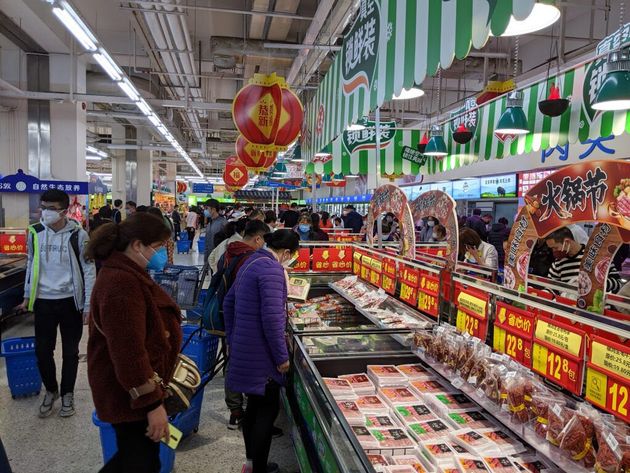 And it’s not just one kind of mask. You can see the whole gamut, from black cloth masks, to the blue-white disposable masks, to the yellow-strapped fancy N95 particulate filter masks. Once we reached the plaza on top of the park, we found multiple local police (“bao’an”) milling about and a continuously looping message playing reminding everyone to wear face masks and leave at the slightest sign of fever.

We went to hike another small hill, Xiaonanshan, and had just made it a few steps from the entrance when the security guard for the park yelled at us to come back. He told us to put on our masks, and then walk up again past the ubiquitous cameras, just so that he wouldn’t be told off for being lax, even though objectively, a wide-open trail with few other hikers is almost as low-risk an environment as it gets.

(An aside: while masks have been shown to reduce the rate of getting the flu in some studies, the CDC does not recommend it for people without symptoms, partly because many users do not wear them consistently or correctly. Measures like frequently washing one’s hands and avoiding touching one’s eyes, nose and mouth are likely to be equally important, although they’ve been studied less.)

The other weapon of the resistance against coronavirus is the mighty infrared thermometer. Never seen one? It looks a bit like a barcode scanner, except point it at someone, and bam! You’ll know whether they’re feverish and diseased or just a regular, asymptomatic citizen. 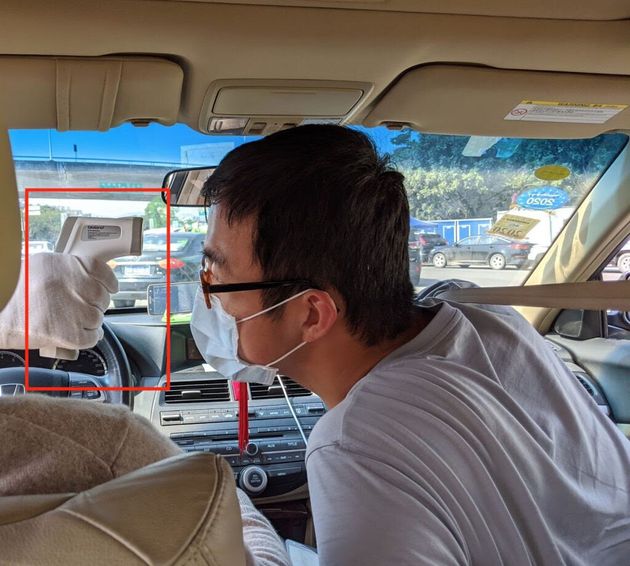 Flippancy aside, they are effective for seeing who has a fever, but based on the latest research, the coronavirus can be present without symptoms in children and Chinese officials have stated that it can spread before symptoms show. (That being said, Nancy Messonnier, the director of the CDC’s National Center for Immunization and Respiratory Disease, said Wednesday that the agency doesn’t have any evidence that patients are infectious before symptoms begin to show.)

We see these thermometers at gated public areas like parks and xiaoqu, as well as anywhere where one might enter or exit cities (including at highway toll booths and the entrance to the Shenzhen ferry terminal).

Together, both temperature scanners and face masks are a form of “health theater” — while moderately effective, they’re also performative. They signal to the bureaucratic bosses and other citizens that “we’re doing our best to stop the coronavirus.”

And yet, life goes on.

Despite empty streets, face mask-wearing and thermometer-waving citizenry, and closed businesses, life goes on. Families are still enjoying Chinese New Year together at home, flying kites in the park, shopping at Walmart, and eating at McDonald’s. My parents, Harry, and I made dumplings, duck and vegetables; watched “Parasite” (an excellent movie) together at home; and chatted about our lives and how our mom’s house renovation was coming along.

This is not to minimize the effect of the coronavirus. It literally is the only news in China right now. The economic impact has been immense, with a tourist season cut short. Wuhan is bearing the worst of it, with thousands of cases, many deaths, and more likely to come.

Overall, though, I came away from my time in Shenzhen feeling reassured that China’s got the disease under control. Everywhere in China other than Wuhan, I feel like you’re safer from not just the new coronavirus, but any infectious disease, than you would be even in the U.S. thanks to the precautions being taken right now. I’d recommend against visiting China today. But if you’re already here, I’d recommend an abundance of caution. Wash your hands, wear a mask, and avoid high-risk areas. But know that you’re not walking into a zombie apocalypse (as the Express would like you to believe), and that you’re seeing China like we’ve never seen before.

Peter Xu and his brother, Harry Yu, are the co-founders of Wanderlog, a document for planning travel itineraries. They were born and raised in China until age 7, moved to Canada, and now live together in San Francisco.