US rescuers set out in hundreds of boats and helicopters to reach people trapped by floodwaters.

US rescuers have set out in hundreds of boats and helicopters to reach people trapped by floodwaters after a furious Hurricane Ida swamped the Louisiana coast and ravaged the electrical grid in the stifling, late-summer heat.

Residents living amid the maze of rivers and bayous along the state's Gulf Coast retreated desperately to their attics or roofs and posted their addresses on social media with instructions for search-and-rescue teams on where to find them.

More than one million customers in Louisiana and Mississippi — including all of New Orleans — were left without power as Ida, one of the most powerful hurricanes ever to hit the US mainland, pushed through on Sunday (local time). 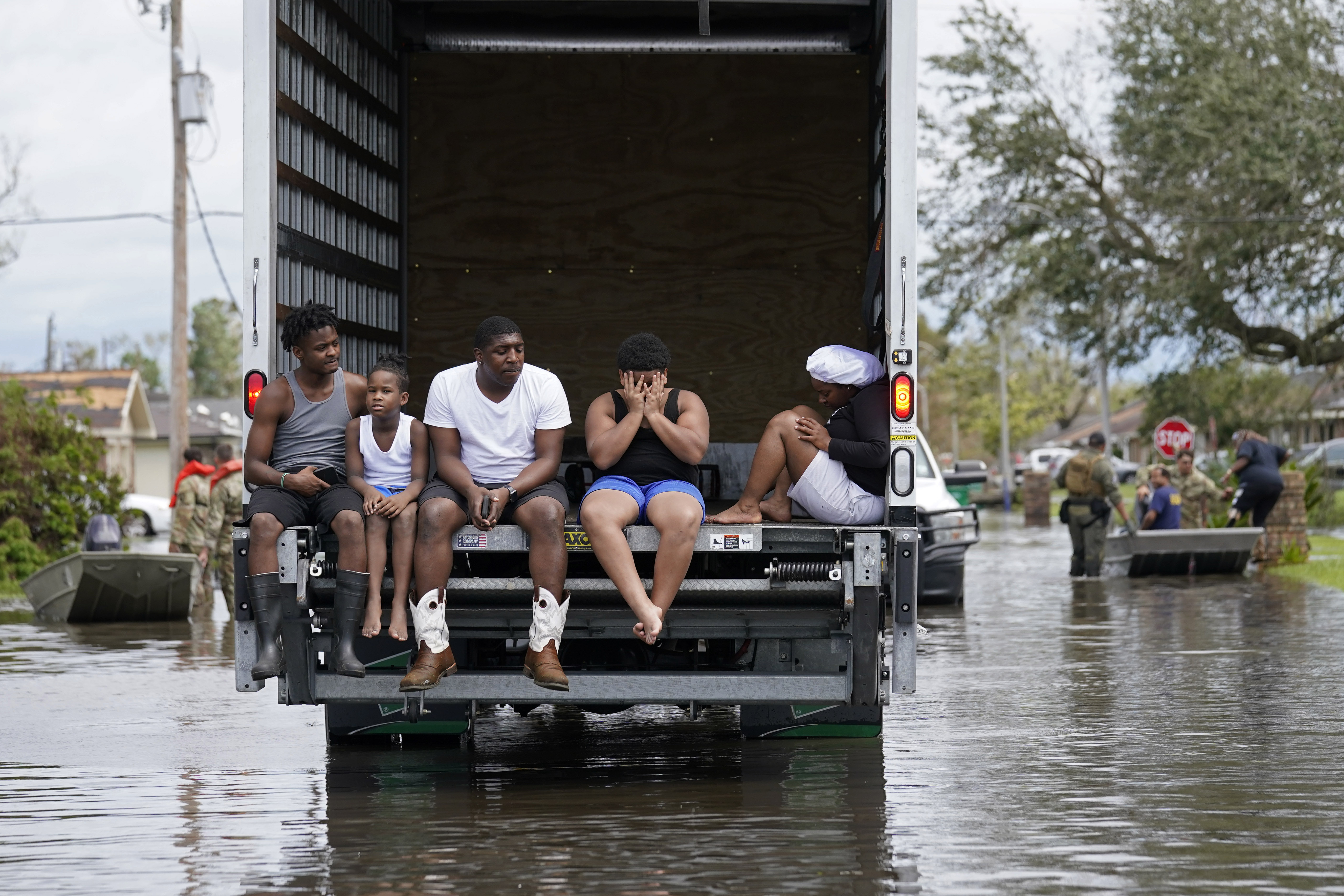 The damage was so extensive that officials warned it could be weeks before the power grid was repaired.

President Joe Biden met virtually with Louisiana Governor John Bel Edwards and Mississippi Governor Tate Reeves along with mayors from cities and parishes most impacted by Hurricane Ida to receive an update on the storm's impacts, and to discuss how the Federal Government can provide assistance.

"We are closely coordinating with state and local officials every step of the way," Mr Biden said.

FEMA staged more than 3.4 million meals, millions of litres of water, more than 35,700 tarps, and roughly 200 generators in the region in advance of the storm.

As the storm was downgraded to a tropical depression yesterday afternoon and continued to make its way inland with torrential rain, it was blamed for at least two deaths — a motorist who drowned in New Orleans and a person hit by a falling tree outside Baton Rouge.

But with many roads impassable and cellphone service out in places, the full extent of its fury was still coming into focus.

Christina Stephens, a spokesperson for Mr Edwards, said that given the level of destruction, "We're going to have many more confirmed fatalities."

The governor's office said damage to the power grid appeared "catastrophic" —dispiriting news for those without refrigeration or air conditioning during the dog days of summer, with highs forecasts predicted by midweek.

"But what I can tell you is we are going to work hard every day to deliver as much assistance as we can."

In hard-hit LaPlace, squeezed between the Mississippi River and Lake Pontchartrain, rescuers saved people from flooded homes in a near-constant operation.

Debbie Greco, her husband and son rode out the storm in LaPlace with Ms Greco's parents.

Water reached a foot up the first-floor windows, then filled the first floor to 1.2 metres deep once the back door was opened.

They retreated to the second floor, but then screaming winds collapsed the roof as waves broke in the front yard.

They were finally rescued by boat after waiting in the only dry spot, five people sharing the landing on the stairs. 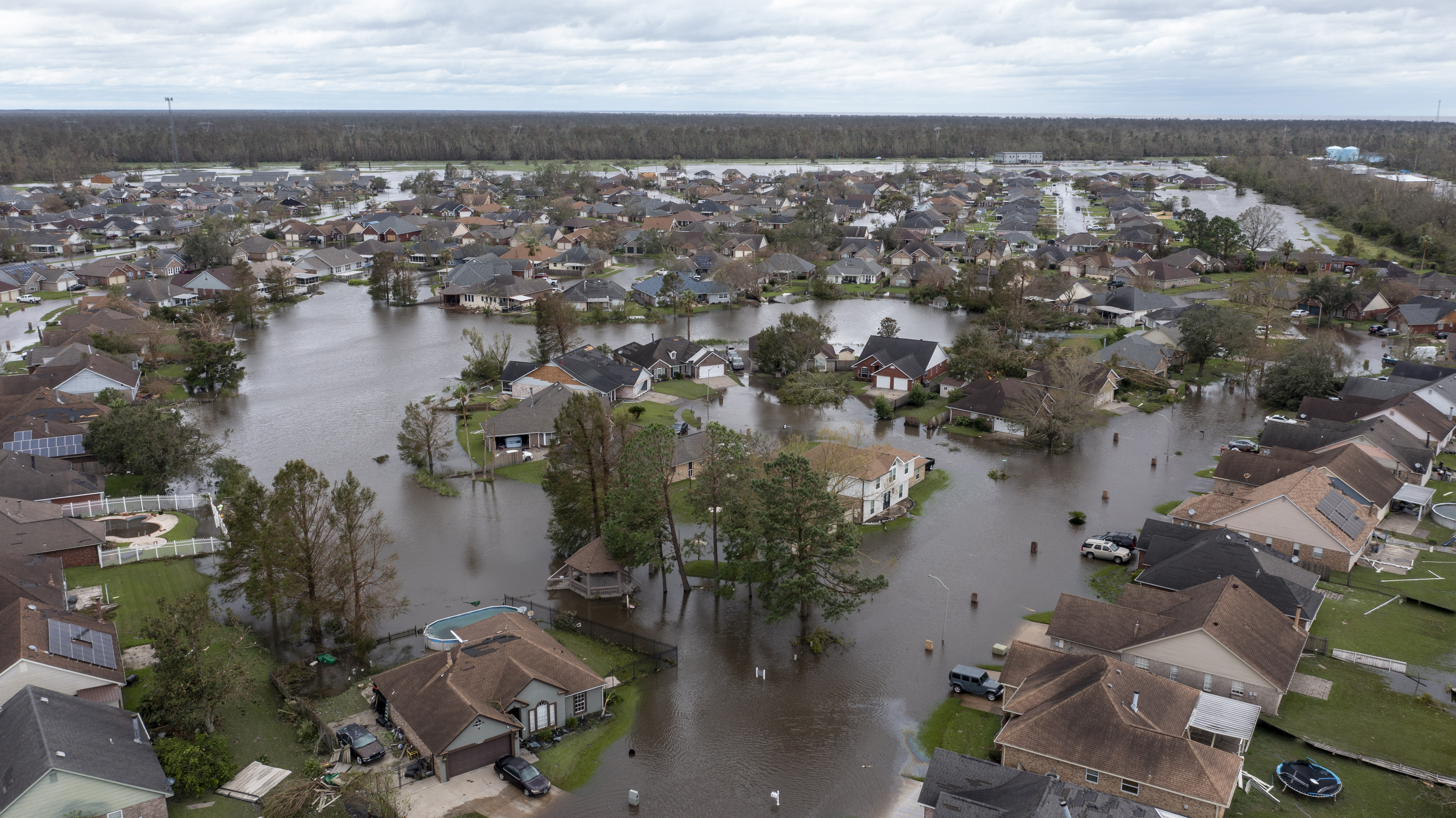 "When I rebuild this I'm out of here. I'm done with Louisiana," said Ms Greco's father, 85-year-old Fred Carmouche, a lifelong resident.

Elsewhere in LaPlace in Louisiana people pulled pieces of chimneys, gutters and other parts of their homes to the curb and residents of a mobile home park waded through floodwaters.

The hurricane blew ashore on the 16th anniversary of Katrina, the 2005 storm that breached New Orleans' levees, devastated the city and was blamed for 1800 deaths.

Stephanie Blaise returned to her home with her father in New Orleans' Lower Ninth Ward after evacuating.

The neighbourhood suffered devastating flooding in Katrina, but only lost some shingles in Ida.

READ:  Troubled Water … Is This A Bridge?

However, with no idea when electricity would be restored, Ms Blaise didn't plan to stay long.

"We don't need to go through that. I'm going to have to convince him to leave. We got to go somewhere. Can't stay in this heat," she said.

The city urged people who evacuated to stay away for at least a couple of days because of the lack of power and fuel.

"There's not a lot of reasons to come back," Collin Arnold, chief of emergency preparedness, said.

Also, 18 water systems serving about 255,000 customers in Louisiana were knocked out of service, the state Health Department said. 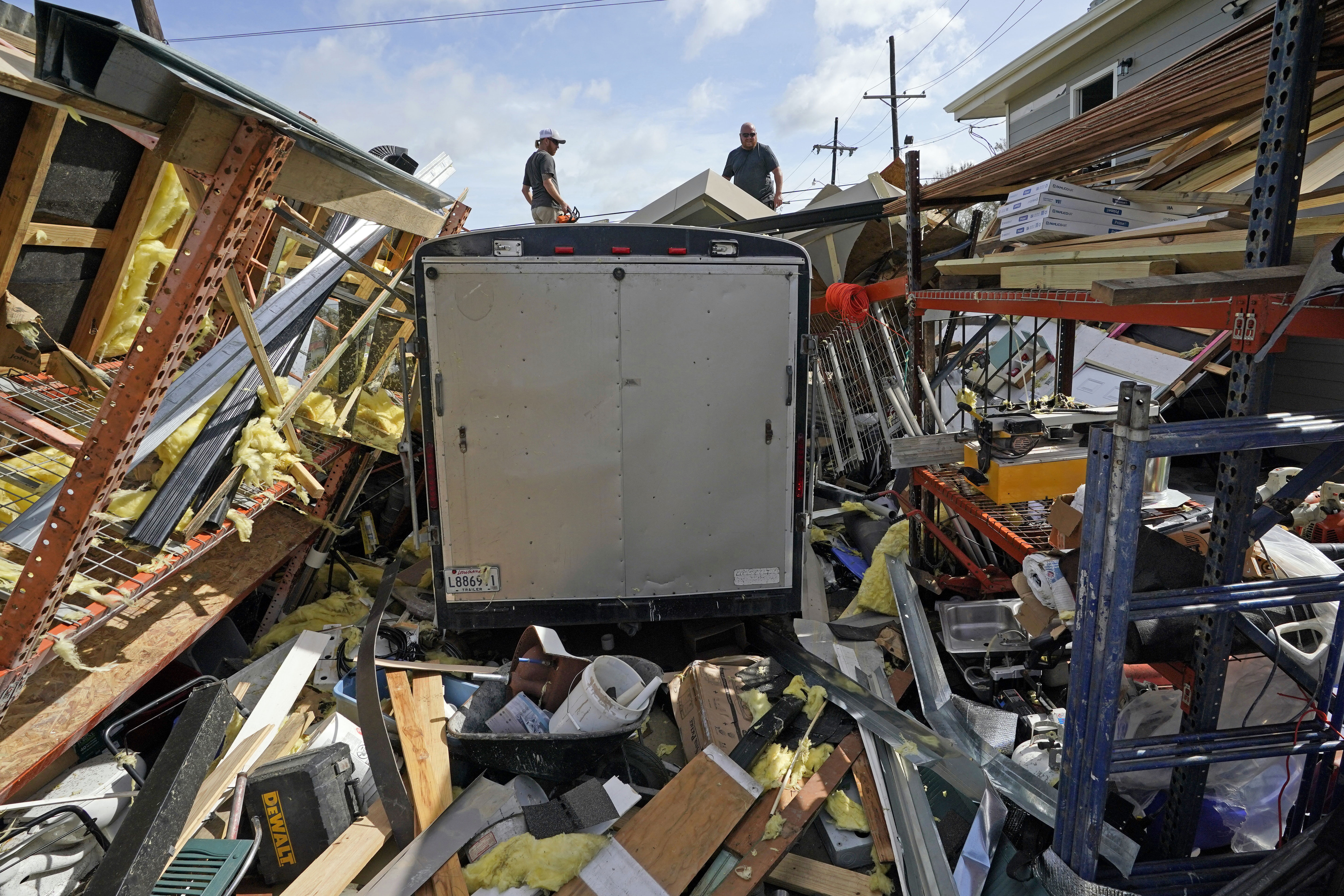 Officials said they were evacuating scores of patients to other cities.

The governor's office said over 2200 evacuees were staying in 41 shelters, a number expected to rise as people were rescued or escaped flooded homes.

The governor's spokesperson said the state will work to move people to hotels as soon as possible so they can keep their distance from one another.

"This is a COVID nightmare," Ms Stephens said, adding: "We do anticipate that we could see some COVID spikes related to this."

Other parts of Louisiana and Mississippi, Alabama and Florida got 127 to 279.4mm.

Mr Edwards said he decided not to tour hurricane damage by air to add one more aircraft to the effort.

On Grand Isle, the 40 people who stayed on the barrier island through the brunt of the hurricane gave aircraft checking on them Monday a thumbs-up, Jefferson Parish Sheriff Joe Lopinto said.

The road to the island remained impassable and rescuers would try to reach them as soon as they are able, the sheriff said.

The hurricane twisted and collapsed a giant tower that carries key transmission lines over the Mississippi River to the New Orleans area, causing widespread outages, Entergy and local authorities said.

The power company said more than 3218 kilometres of transmission lines were out of service, along with 216 substations. The tower had survived Katrina. 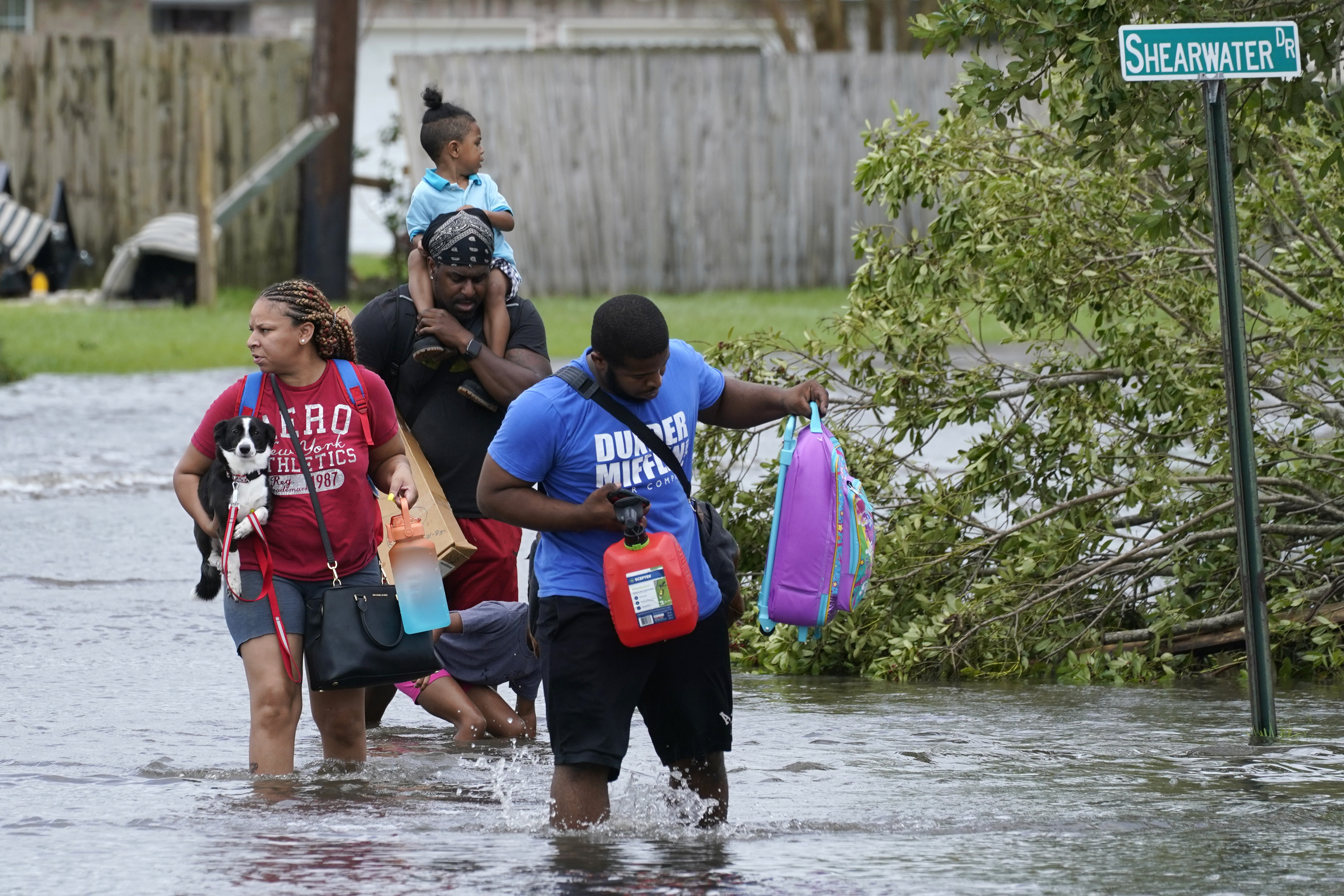 The governor said 25,000 utility workers were in the state to help restore electricity, with more on the way.

"We're going to push Entergy to restore power just as soon as they can," Mr Edwards said.

AT&T said its wireless network in Louisiana was reduced to 60 per cent of normal but was coming back.

Many people resorted to using walkie-talkies.

The governor's office staff had no working phones.

The company sent a mobile tower to the state's emergency preparedness office so it could get some service.

Charchar Chaffold left her home near LaPlace for Alabama after a tree fell on it Sunday (local time).

She frantically tried to get in touch via text message with five family members who stayed behind.

She last heard from them Sunday night.

They were in the attic after water rushed into their home.

"They told me they thought they was going to die. I told them they are not and called for help," she said. Ida's 230km/h winds tied it for the fifth-strongest hurricane ever to hit the mainland.

Its winds were down to 64km/h around midday Monday.

In Mississippi's southwestern corner, entire neighbourhoods were surrounded by floodwaters, and many roads were impassable.

Ida was expected to pick up speed Monday night before dumping rain on the Tennessee and Ohio River valleys Tuesday, the Appalachian mountain region Wednesday and the nation's capital on Thursday.

Forecasters said flash flooding and mudslides are possible along Ida's path before it blows out to sea over New England on Friday.