Hurricane Ida is looking eerily like a dangerous and perhaps scarier sequel to 2005’s Hurricane Katrina, the costliest storm in American history.

Hurricane Ida is looking eerily like a dangerous and perhaps scarier sequel to 2005's Hurricane Katrina, the costliest storm in American history.

But there's a few still-to-come twists that could make Ida nastier in some ways, but not quite as horrific in others.

"The main story with Katrina was storm surge damage, and over a vast area. The main story with Ida will be a combination of wind, storm surge, and fresh water flooding damage," meteorologist Jeff Masters, who flew hurricane missions for the government and founded Weather Underground, said. 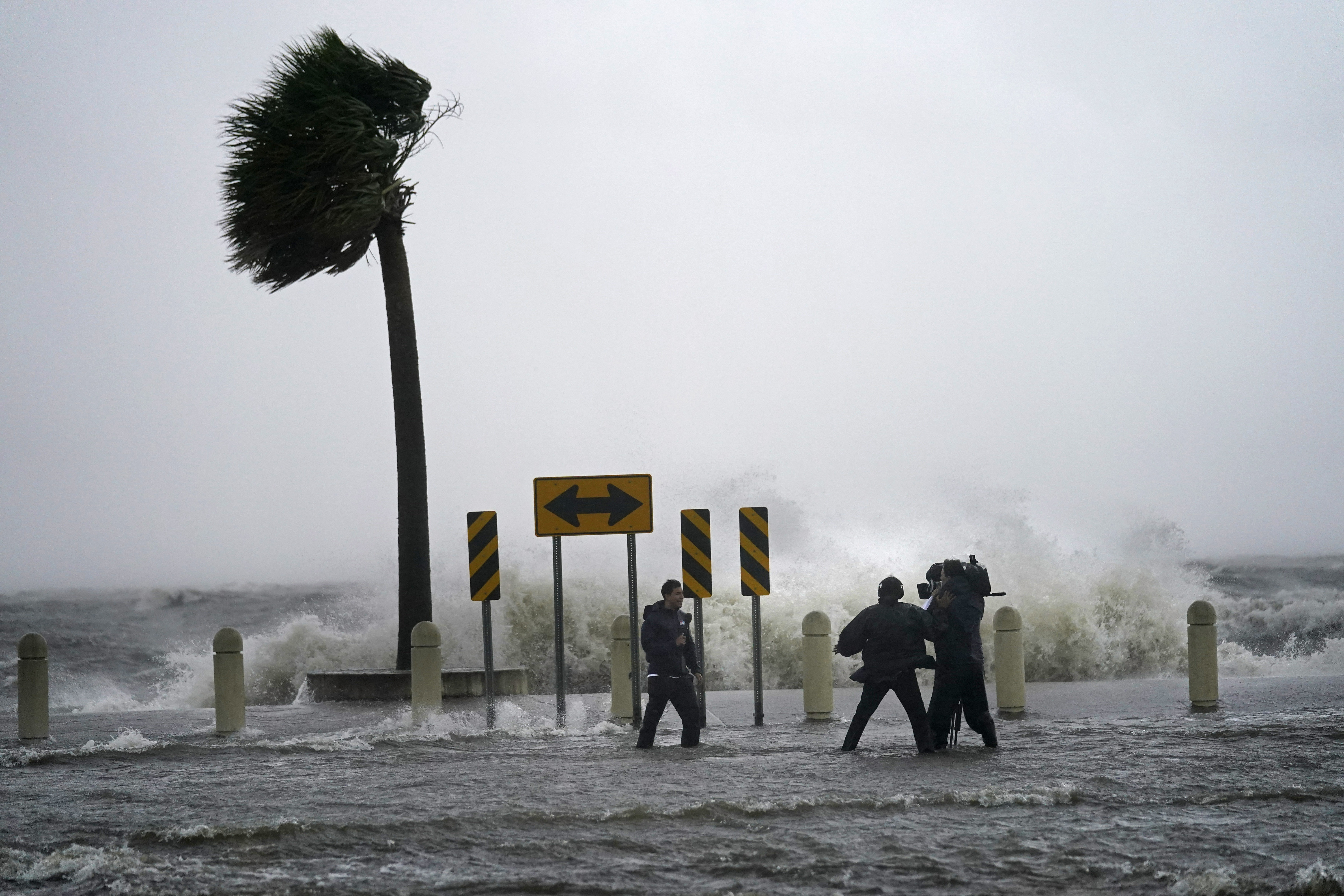 Ida made landfall on the same calendar date, August 29, as Katrina did 16 years ago, striking the same general part of Louisiana with about the same wind speed, after rapidly strengthening by going over a similar patch of deep warm water that supercharges hurricanes.

What could be different is crucial though: direction, size and strength.

"Ida will most definitely be stronger than Katrina, and by a pretty big margin,'' University of Miami hurricane researcher Brian McNoldy said.

"And, the worst of the storm will pass over New Orleans and Baton Rouge, which got the weaker side of Katrina."

Ida was a strong category four storm with 241km/h winds when it made landfall, "a sneeze away from becoming the fifth category five landfall on the continental US," Mr McNoldy said. 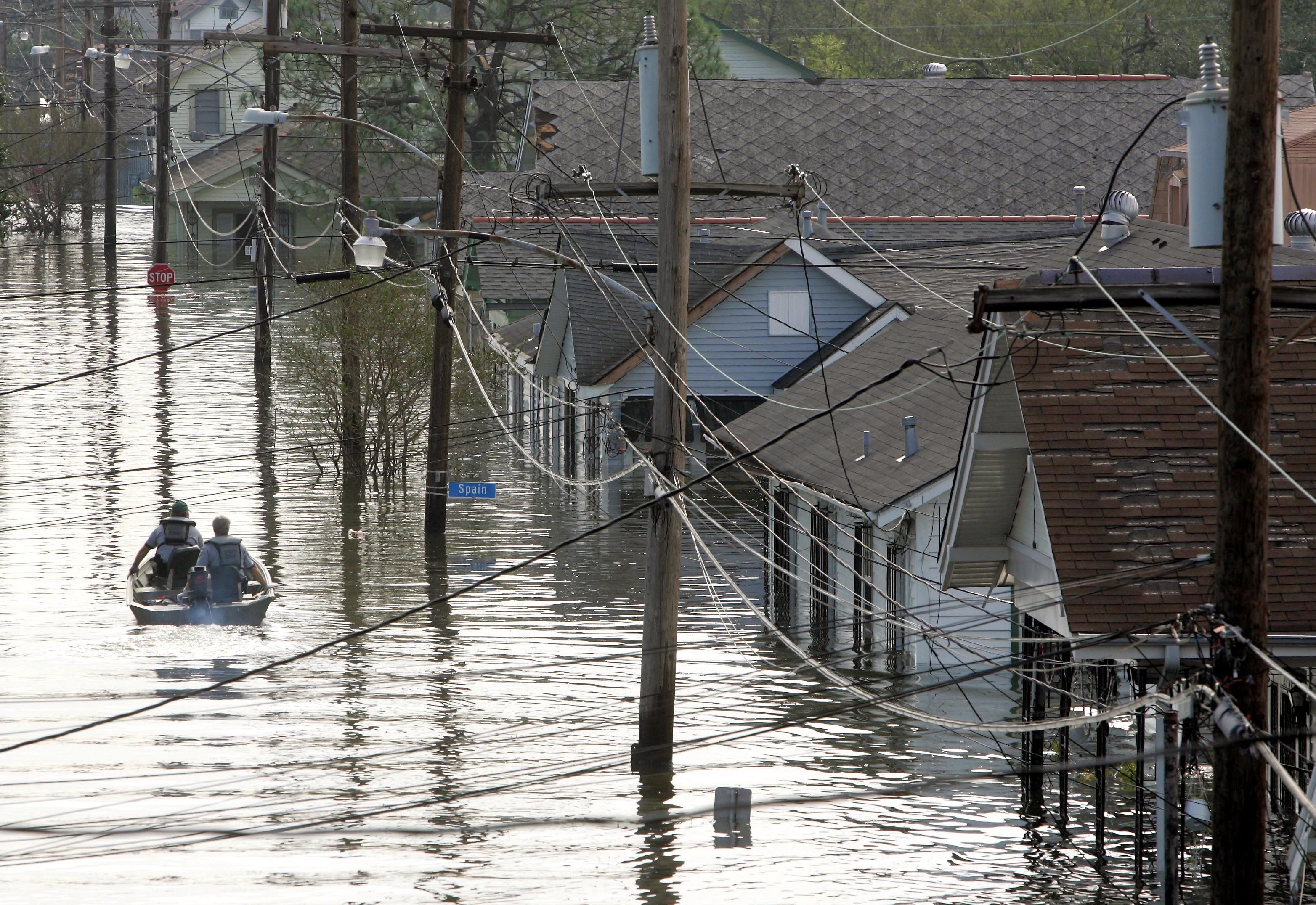 Katrina weakened quite a bit before landfall, striking Louisiana as a category three storm with 127km/h winds.

Katrina hit Louisiana from due south, while Ida is coming to the same part of the state from south-east.

"This has the potential to be more of a natural disaster whereas the big issue in Katrina was more of a man-made one" because of levee failures, Mr McNoldy said.

Levee failures pushed Katrina's death toll to 1833 and its overall damage to about US$176 billion ($241 billion) in current dollars, and experts don't expect Ida to come near those totals.

Ida came to the same general place from a slightly different direction.

Several hurricane experts fear that difference in angle may put New Orleans more in the dangerous storm quadrant — the right front part of a hurricane — than it was in Katrina, when the city was more devastated by levee failure than storm surge.

Because it is smaller "it's not going to as easily create a huge storm surge ... but the angle that this is coming in, I think is more conducive to pushing water into the lake (Pontchartrain)." 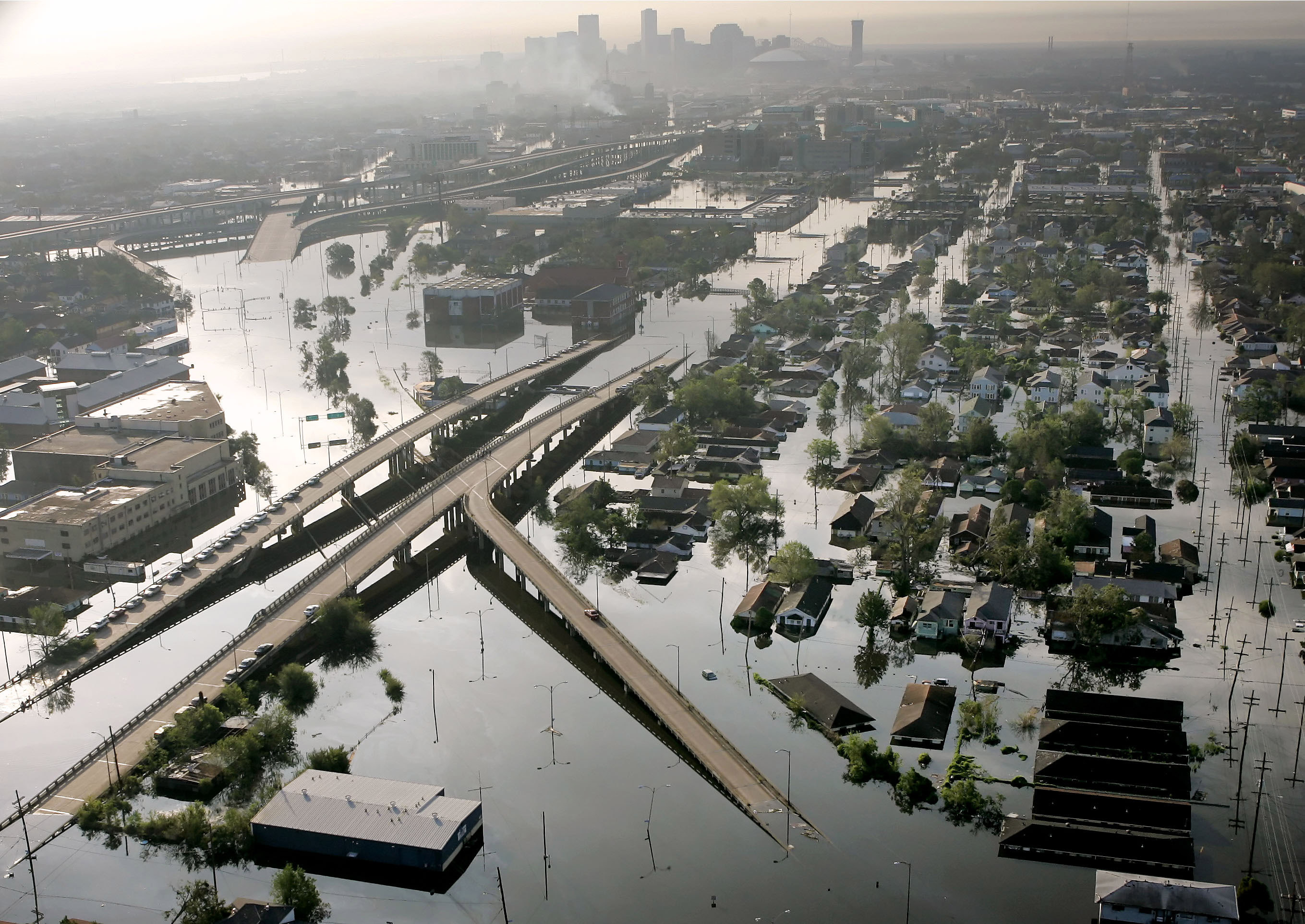 That northwestern path of Ida not only puts New Orleans more in the bullseye than it did in Katrina, but it also more targets Baton Rouge and crucial industrial areas, Masters said.

He said Ida is forecast to move through "the just absolute worst place for a hurricane."

"It is forecast to track over the industrial corridor between Baton Rouge and New Orleans, which is one of the key infrastructure regions of the US, critical to the economy," Mr Masters said.

"You're probably going to shut down the Mississippi River for barge traffic for multiple weeks."

Meteorologist Steve Bowen, head of global catastrophe insight at the risk and consulting firm Aon, said the impact will be felt beyond coastal areas.

The difference is size is not just physically huge, but it matters for damages.

Storms that are bigger in width have larger storm surge because of the broader push of the water. 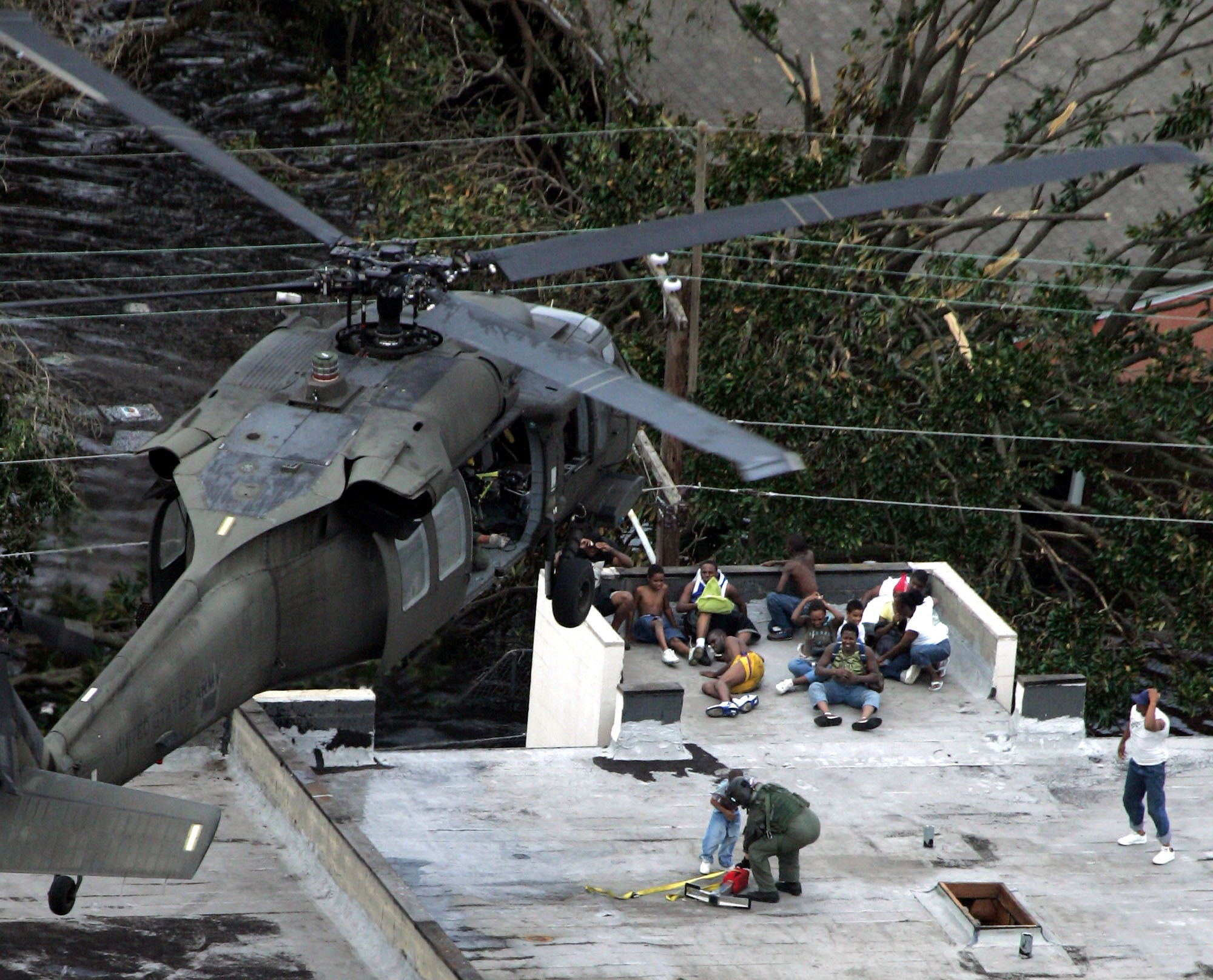 There's a trade-off of intense damage in a smaller area versus less damage, but still bad, in a wider area.

Bowen and Princeton University's Gabriel Vecchi said they don't know which scenario would be worse in this case.

The Loop Current is this deep patch of incredibly warm water.

It takes warm water off the Yucatan Peninsula does a loop in the Gulf of Mexico and spins up the eastern edge of Florida into the Gulf Stream.

Normally when a storm intensifies or stalls it takes up all of the region's warm water and then hits colder water that starts to weaken the storm or at least keeps it from further strengthening.

But these warm water spots keep fueling a storm.

Katrina powered up this way and so did Ida, gaining power over an area with hurricane fuel more than 150 metres deep, "just a hot tub," Mr McNoldy said.

In the past 40 years, more hurricanes are rapidly intensifying more often and climate change seems to be at least partly to be blame, Jim Kossin and Mr Vecchi said.

"Running over these Loop Current (eddys) is a very big deal. It's really dangerous," climate and hurricane scientist Mr Kossin of The Climate Service said.

"It has a human fingerprint on it," said Mr Kossin, who with Mr Vecchi was part of a 2019 study on recent rapid intensifications.

After a hurricane rapidly intensifies it becomes so strong and its eye so small that it often can't quite keep going that way, so it forms an outer eyewall and the inside eyewall collapses, Mr Kossin said.

When a new eyewall forms, often a storm becomes larger in size but a bit weaker, Mr Kossin said. 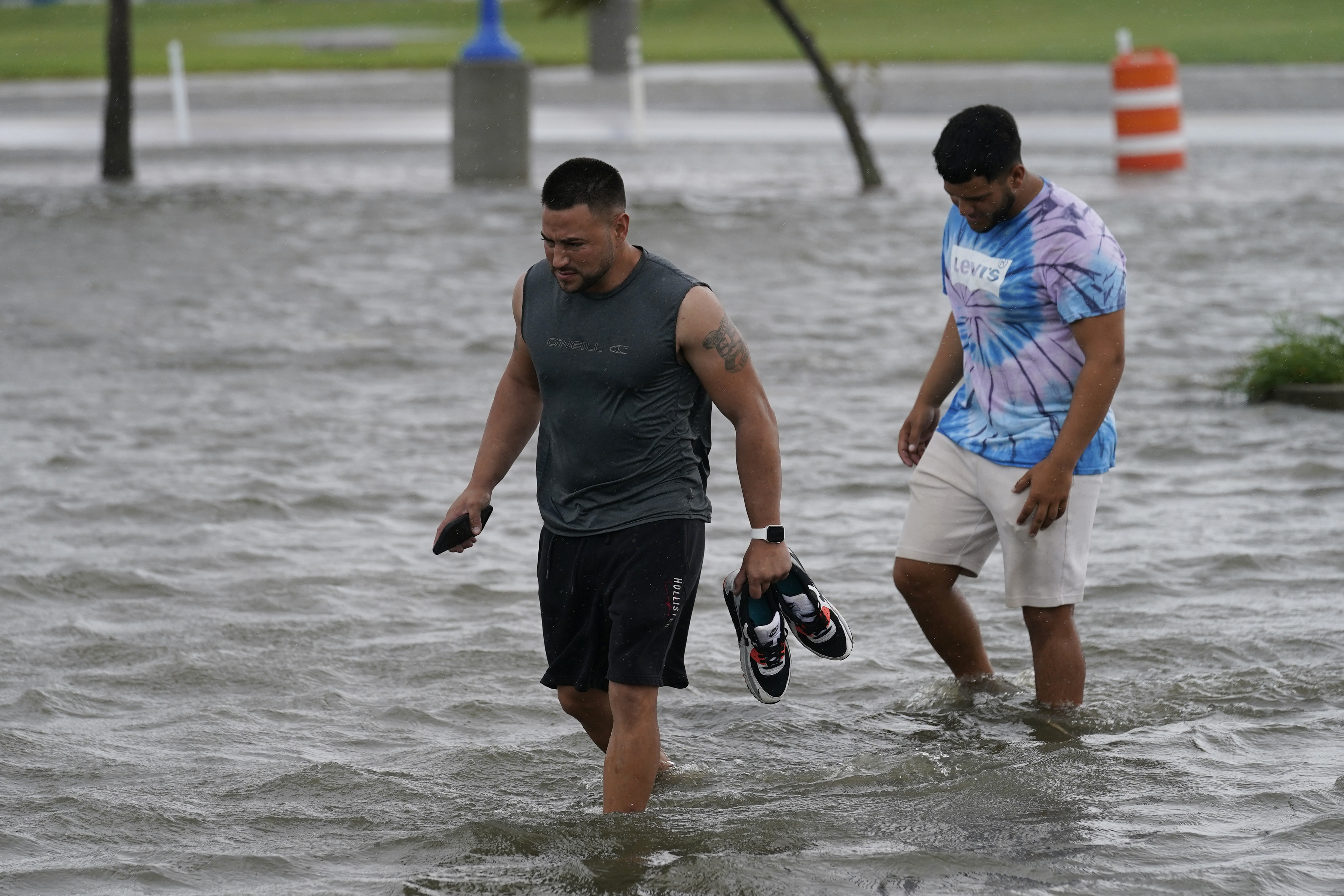 So key for Ida is when and if that happens. It happened for Katrina, which steadily weakened in the 12 hours before it made landfall.

Ida has started the process of eyewall replacement, but Mr McNoldy said he doesn't think it matters.

"It has run out of time to do anything that would make a difference."

Meteorologists have improved forecasts and they hope that Louisiana is better prepared than in 2005 with a stronger levee system.

However, Bowen said Ida is coming a year after Hurricane Laura smacked Louisiana in 2020 with 241km/h winds.

"No US state since 1851 has ever recorded back-to-back years of 150+ mph hurricanes making landfall," Mr Bowen said.

"Following Laura's landfall in 2020, Louisiana is about to make unfortunate history."