British tabloids are hammering Meghan, Duchess of Sussex, and her husband Prince Harry after their explosive interview with Oprah Winfrey.

British tabloids are hammering Meghan, Duchess of Sussex, and her husband Prince Harry after their explosive interview with Oprah Winfrey.

Meghan revealed during the sit-down conversation that life within the royal family was so isolating, lonely and lacking in support that she had experienced suicidal thoughts. She also said that individuals within the institution had raised concerns about the color of their son Archie's skin.

Even before the interview — Meghan's first since she and her husband announced plans to step back from senior roles in the British royal family — the UK media had been criticizing the event. The relationship between the couple and the country's press, and particularly newspaper tabloids, has long been tumultuous.

The Daily Mail ran wall-to-wall coverage of the interview, and tried to fit all of the bombshells into a single headline this way: "Meghan claims she was suicidal when she was 5 months pregnant, Kate made HER cry and Royals refused to make Archie a prince because they were worried how 'dark' he would be, as Harry reveals their new baby will be a GIRL." The website was dominated with coverage, including at least 13 articles about the interview that included photos.

The interview aired at 1 am local UK time.

The tabloid's website also included a prominent banner that read: "I WANTED TO KILL MYSELF," and featured a clip playing on loop from the interview, which showed Meghan saying, with subtitles: "I just didn't want to be alive anymore."

Another article on the website ripped into the couple's discussion during the interview about life in the United States, where they are raising chickens.

"Back to basics at their $14.5 million mansion," read one headline.

The deluge of stories on the Daily Mail homepage follows a dismissive pre-interview banner headline earlier on Sunday, in which the outlet attempted to lambast the CBS special as "a sideshow." 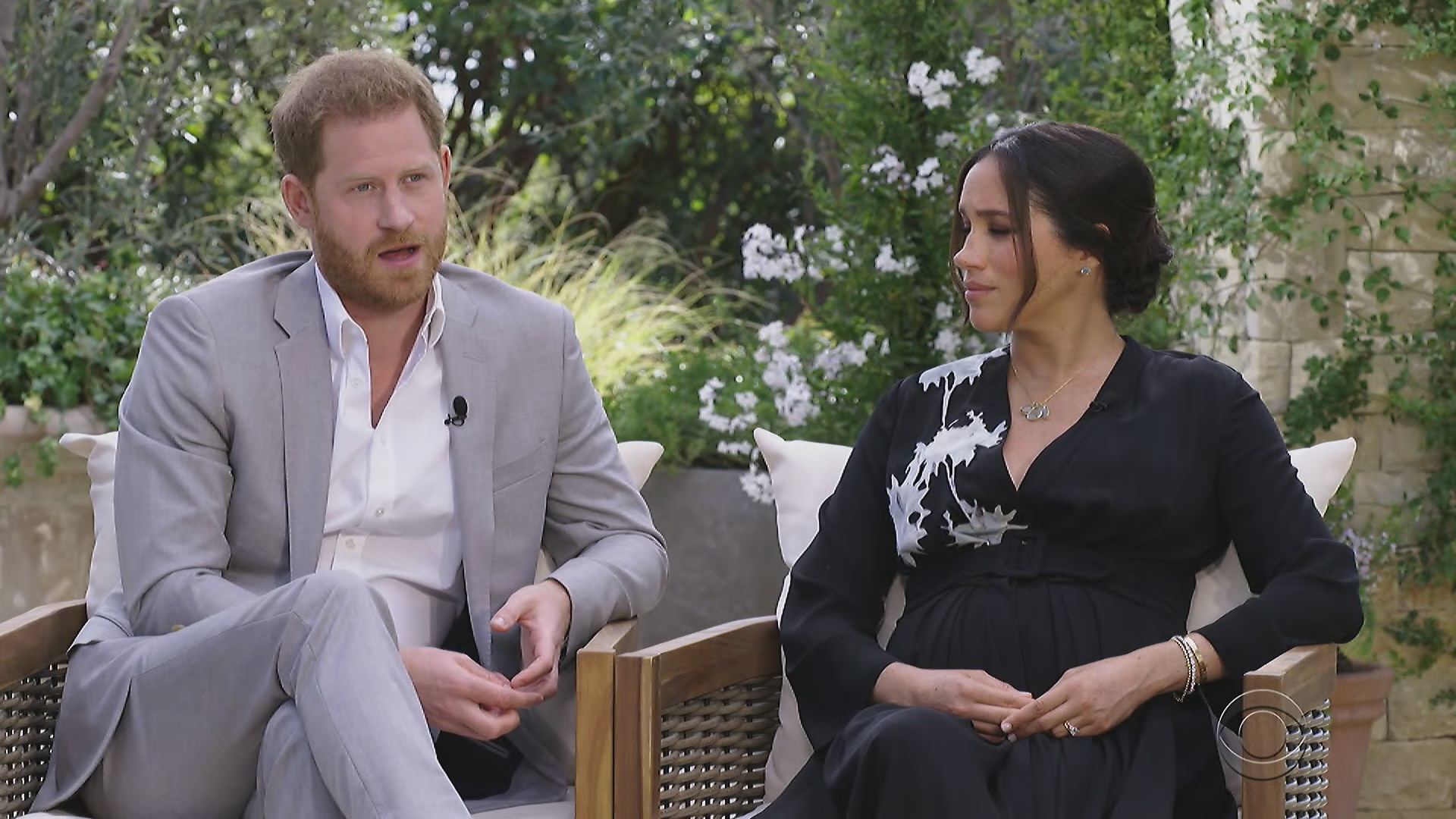 Other newspapers were also quick to weigh in on the potential fallout of the interview.

"Meghan Markle may never return to Britain after angering Royal Family with bombshell Oprah interview," The Sun newspaper wrote, referring to Meghan's name before marriage. It cited "insiders [who] fear she and Prince Harry could have burnt their bridges by failing to tell family members what was in the two-hour chat before it was shown."

The publication has come up with a new nickname for Meghan amid her rift with the royal family: "Megxile." Previously, British tabloids have labelled the couple's decision to step away from their royal duties "Megxit," a riff on the term used to describe the United Kingdom's departure from the European Union.

"Queen: Duty and family unite us," read the front page of the Daily Express newspaper. "That's public service for you, Harry and Meghan ... NOT a self-serving TV chat with Oprah."

Even ahead of the program, British tabloids came armed for the occasion, which was among the biggest royal interviews in decades.

READ:  'Do not travel to China': US issues coronavirus alert

Both the duke and duchess have increasingly opened up about the harsh media scrutiny they have received.

Last month, Prince Harry told late night talk show host James Corden that his experiences had prompted him to take a step back from the royal family. "We all know what the British press can be like, and it was destroying my mental health," he said.

And in April of last year, Harry and Meghan said they would cut off all dealings with four of the United Kingdom's biggest tabloid newspapers after years of strained relations. The couple has also tussled with the media in court.

In the interview with Oprah on Sunday, Meghan said that it had become painfully clear that there were double standards in how the media covered her and Catherine, the Duchess of Cambridge and wife to Prince William, who is second in the line of succession to the British throne.

"I can see now what layers were at play there. And again, they really seemed to want a narrative of a hero and a villain," said Meghan.

Coverage of the interview with Meghan and Harry was not limited to the tabloids. British morning shows and broadsheets also featured excerpts prominently on Monday.