Programs such as Super-Rewards and Boost Your Super are rewarding shoppers by paying a commission for each online purchase to their chosen superannuation account.

It sounds almost too good to be true, but according to experts it is possible to add thousands of dollars to your superannuation balance while doing your weekly grocery shop.

Thanks to programs such as Super-Rewards and Boost Your Super, hundreds of big name retailers are rewarding shoppers by paying a commission for each online purchase to their chosen superannuation account.

Super-Rewards co-founder Pascale Helyar-Moray said the "lightbulb moment" which lead to the launch of the scheme late last year came after she considered the dire financial situation facing many women during retirement. 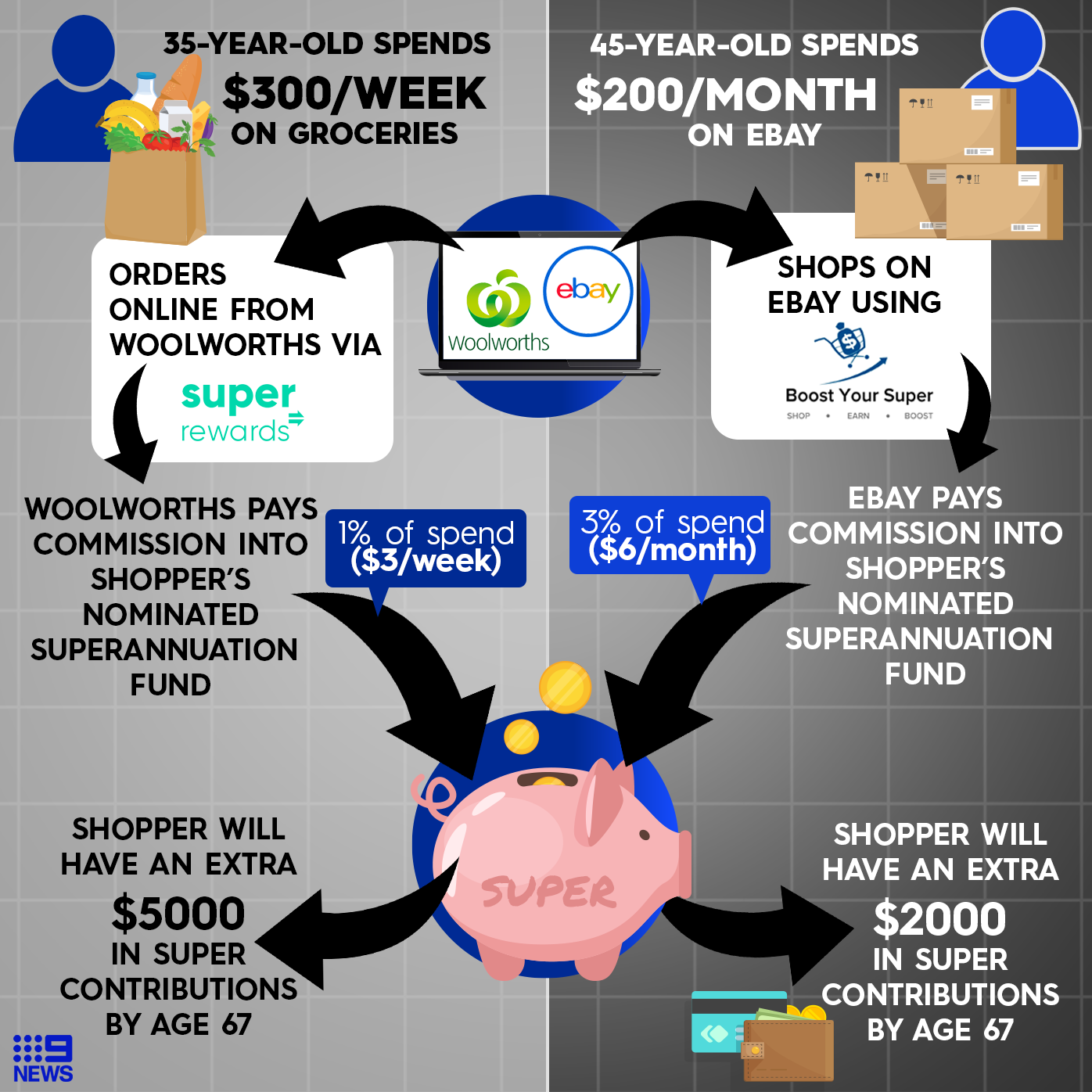 Ms Helyar-Moray, who is also director of the Australian Gender Equality Council, said time spent out of the workforce raising children, coupled with the gender pay gap, meant women end their working lives with 40 per cent less superannuation on average than men.

"Women in Australia do the lion's share of unpaid work looking after children or the elderly and while they are not working, they are also not earning superannuation," Ms Helyar-Moray, a mother-of-three herself, said.

EXPLAINED: Who is eligible to access superannuation early and how to do it

And so Super-Rewards was born. Ms Helyar-Moray admits the scheme is aimed at women, but says men are welcome to join.

Under the program, which has hundreds of retailers on board including big names like Woolworths, Apple and Ebay, stores pay a percentage commission for each sale to the superannuation account of the shoppers choice.

While the percentage is usually only between one and four percent of the purchase price, the fact the money will go on to be invested for many years means the value of the payment by retirement age will be a lot more.

Since launching late last year, Super-Rewards has added thousands to superannuation bank balances across the nation.

Meanwhile, a more recent superannuation shopping scheme offering, Boost Your Super, is experiencing a membership boom as online shopping rates continue to rise thanks to COVID-19.

Boost Your Super has more than 400 stores on board and is looking to add more.

Founder Ngoya Pepela says the appeal of the program comes from the fact people are already spending money at the stores available.

"There's no catch, you pay exactly the same amount you would when buying items without Boost Your Super. In fact, sometimes you actually pay less because we also notify members about special deals retailers are offering," he said.

Canstar money expert Effie Zahos says programs such as Boost Your Super and Super-Rewards are excellent ways to increase superannuation contributions - particularly during times of unemployment or part-time employment.

She said the only concern is that focusing too much on stores connected to the schemes may result in shoppers missing specials and bargains which could save them more money elsewhere.

"I'm a great believer in Australia's superannuation system as a wealth creation savings vehicle and this small cashback is a great way to add to superannuation contributions," she said.

"As long as you keep shopping around and don't miss out on other savings on offer elsewhere."

Ms Zahos said the most important thing when trying to maximise superannuation savings is to ensure you are with a quality superannuation fund which is not charging excess fees and has a decent growth rate.