Here’s who you don’t want to be—the kind of person who says, “Let me know what I can do,” and then never does a thing. When a friend is hurting, grieving or overwhelmed by challenging circumstances, you want to be the reso… 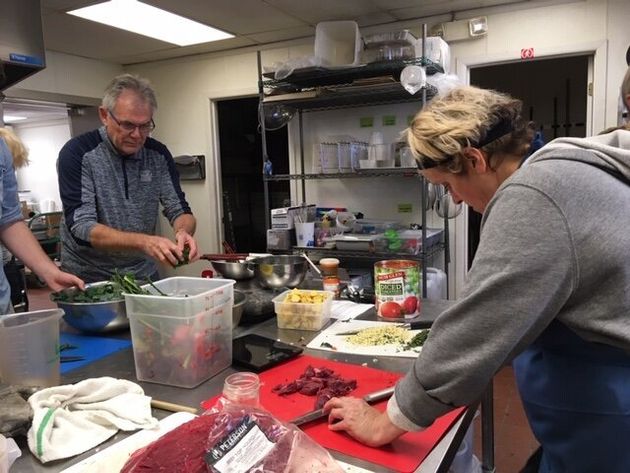 Here’s who you don’t want to be—the kind of person who says, “Let me know what I can do,” and then never does a thing.

When a friend is hurting, grieving or overwhelmed by challenging circumstances, you want to be the resourceful, helpful one — the person who does something that’s actually useful. The ways you can make a difference are as varied as the many ways that humans can be laid low and in need of consolation. But for most of us, sharing food is a classic way to say, “This sucks. I’m here. You aren’t alone.”

“Food is how we show people we care for one another and love each other,” Leah Samler, psychologist and adjunct faculty member at Pepperdine University, told HuffPost. “One of the most meaningful things you can do for someone is to cook for them, especially when you make one of their favorite meals. It’s a comforting and healing act, both for them and for you.” Samler added that an offering of food also can also serve as a needed opening for a deeper conversation. “There’s an urgency in our society to ‘get over it,’ but sharing food offers a good framework for asking ‘How are you?’ and then really listening.”

Yes, you certainly can make your favorite tuna-pineapple casserole with the potato chip topping and take it to someone’s home, but there are other ways to share food that can be more fun for you and more empowering for your friend. One way is by having a collective cooking party. In Minneapolis, Eat for Equity leads these parties to gather friends to prepare food in celebration and in crisis.

Our whole organization was founded on the idea that there’s power in a group effort.Emily Torgrimson, executive director of Eat for Equity

Emily Torgrimson is executive director of the organization, which includes a nonprofit that organizes community feasts-for-a-cause nationwide, as well as a benefit corporation that sells catering services. “There’s something really nourishing about bringing a community together to make food,” she told HuffPost. “It feels good not only to do this to help friends in need, but to connect in a practical way with other people who love them.”

READ:  Mitt Romney Will Vote To Convict Donald Trump For Abuse Of Power, In Split With GOP

The concept took root three years ago, when a friend of Torgrimson’s, Peter Rich, died suddenly of an asthma attack at his home in Brazil. “Another chef and I offered to organize food for his memorial service that was being planned in his hometown in Wisconsin. We planned a menu that included a traditional Brazilian stew, feijoada, rice and salads. One of the last memorable meals I had with him was celebrating my birthday with a bunch of pies, so we planned to make a lot of pies. Then we thought that other friends of his might like to help. Our whole organization was founded on the idea that there’s power in a group effort, so we put out a call.”

The night before the memorial service, friends and families got together to cook. “I think it was a healing experience for his mom, dad and brother to meet his friends in a more intimate setting, and to connect over the stock pot and the chopping board,” she said. There was a helpful rhythm in combining work and meaningful conversation. “Having something to do allowed us to talk about him and acknowledge our loss, but then to take a break and talk about something more mundane, like whether the pies were ready to come out of the oven.”

The collective cooking concept has since been expressed in different ways. Recently, Torgrimson hosted a cooking party for a friend who was diagnosed with breast cancer and was scheduled to have a mastectomy. “She asked me to get her different friend groups together to make food that would nourish her as she recovered. We made recipes she chose, including beef stew, soups, puddings, bone broth and four dozen bunches—I know, really a lot—of kale. As we cooked, she was right there to taste and offer her opinions: ‘Is the applesauce sweet enough?’ that sort of thing. I think her friends appreciated meeting each other, offering support and making foods they knew she specifically wanted, which was better than just dropping off a hot dish and hoping she would like it.”

How To Organize Your Own Party

If you’d like to organize a similar event where you live, Torgrimson offered some advice. First, be inclusive: “Every type of person is needed,” she said. “People don’t need to be great cooks to be full participants. We’ve had people with limited skills, even very young children, participate. If someone is quieter or just needs a break, dishwashing is always needed. And every party gets a boost from a great kitchen entertainer or DJ.” 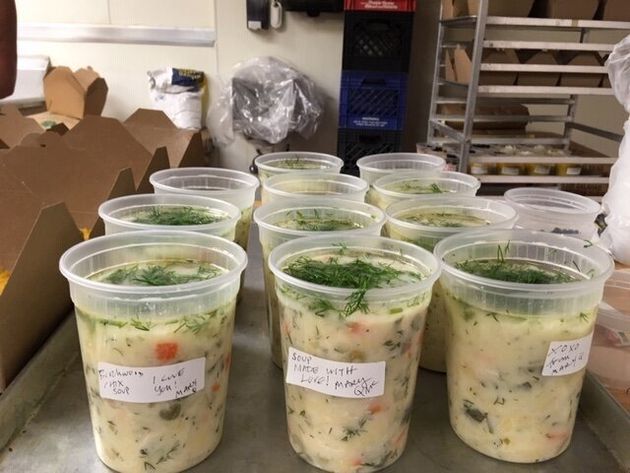 She suggested choosing recipes that don’t require a ton of technical expertise. “It needs to be OK if the onions are a big chop or a fine chop, or a mix of both. Choose dishes that benefit from having a lot of hands on deck, like tamales, empanadas or lasagna. Remember that something that might take one person a long time to do, like chopping apples for a pie, is easy for a crowd.”

Finally, she said it’s important to keep the larger purpose of the event in mind: “You’re not there just to produce food, but also to connect with people, so make time to do that, especially if you’re the organizer. So many good things will come out of this day. Take time to do introductions and cover some safety tips at the beginning, and then circle up at the end of the session to ask what people are excited to eat, or what they learned while working. Yes, you’ll make a few gallons of soup or trays of food, but you’ll also gain meaning out of the event, make some important connections and surround your friend with a loving community.”

Making food for someone else is a low-tech activity, but that’s not to say it can’t benefit from a bit of tech support to make the process run more smoothly. Meal Train.com is a free platform that organizes meal giving around significant life events. Based in Burlington, Vermont, it aims to close the information gap between those in need and those who want to help.

“People have always been making and delivering food, but having an organized system makes it easier to participate,” co-founder Michael Laramee told HuffPost. “By using the platform, you can extend support beyond just that first week. Our average Meal Train lasts three weeks, but we’ve had them go on for a year or more.” MealTrain.com also is the meal planning partner for CaringBridge, a social network that helps people connect with family and friends during health journeys. 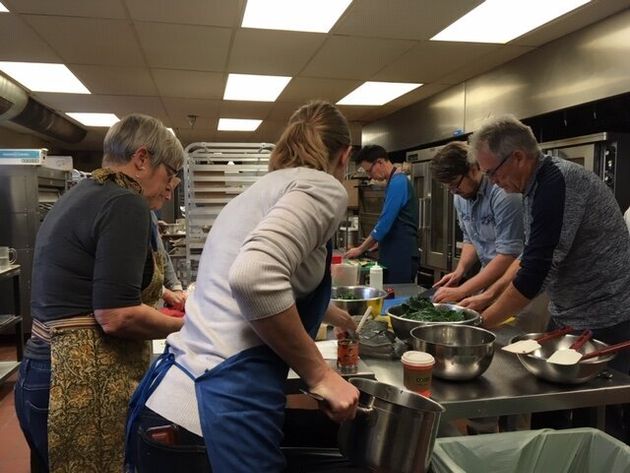 One of the beauties of participating is that the platform helps answer questions like: What foods do they like? What have they already had? Are there any allergies? and When can I drop off a meal? For those who aren’t able to cook or are out of town, the site offers the ability to order gift cards from restaurants, grocery stores and GrubHub.

Since it launched 10 years ago, MealTrain.com says it has helped facilitate the delivery of 13 million meals for people all over the world. “More than 10,000 people get a meal delivered through us every night,” Laramee said. No one state is more active than another, and cities, suburbs and rural areas all participate. In addition to the United States, the site is popular in Canada, New Zealand, Australia and the United Kingdom.

“We humans have an innate desire to help others,” Laramee said. “Thinking about your friend while you’re spending focused time making a meal for them connects you. You take time to think about what they would like, buy the ingredients, prepare the meal and deliver it. It’s not sending a text or mailing a card. It’s supporting them by showing up, literally, on their doorstep.”

Collective cooking is popping up in popular entertainment, too. A new Amazon Prime show, Family Kitchen Revival, is intended to exemplify the power of cooking for one another. In the eight-part series, chef Jonathan Scinto visits families to help prepare meals to say “thank you” to those who helped them through tough times.

“The power of collective cooking unites us,” Scinto told HuffPost. “It’s not just about recipes and food, it’s about sharing a moment together in the kitchen as a family, taking time for reminiscing and gathering together. I hope our show demonstrates how the power of food can heal through the toughest of times. Food has no race, color or gender. I believe it spreads one love to all.”