Katie Nash has been a fan of Sen. Bernie Sanders (I-Vt.) since she saw him speak at a local political rally in the lead up to the 2016 election, but she was careful not to get her hopes up. Though his worldview aligned with hers, she suspected others m… 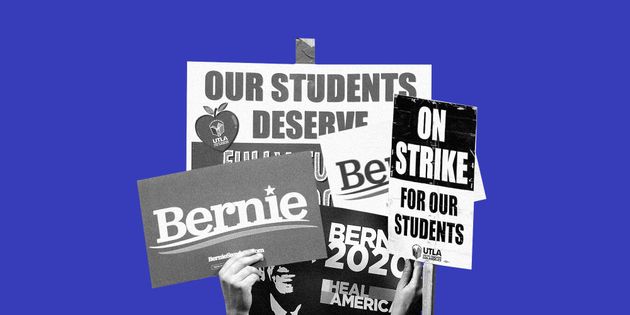 Katie Nash has been a fan of Sen. Bernie Sanders (I-Vt.) since she saw him speak at a local political rally in the lead up to the 2016 election, but she was careful not to get her hopes up. Though his worldview aligned with hers, she suspected others might find his progressive ideals unrealistic and lofty. She didn’t think he had a chance of gaining widespread support as a presidential candidate.

That changed in 2018, when she and around 20,000 other teachers in Arizona participated in a statewide walkout over issues of school funding and low pay. Nash ― who had never previously donated to or caucused for a politician ― described it as a political awakening. Seeing thousands of fellow teachers fighting alongside her for better schools made her realize that maybe she and her neighbors had more in common than she thought.

Ever since the walkout, Nash, a teacher of 14 years, told HuffPost she “hasn’t stopped doing something.” In the lead up to 2020, she has donated to the Sanders campaign, hosted a house party to drum up enthusiasm and participated in organizing calls.

“Seeing what’s possible with grassroots allayed my doubts about his campaign,” said Nash, who is now president of her local union chapter.

Nash is one of many teachers who seem to be “feeling the Bern.” Far more K-12 teachers are donating to Sanders than any other candidate. From Jan. 1, 2019, through Dec. 31, 2019, teachers have donated over $2 million to the candidate, according to data provided to HuffPost by the Center for Responsive Politics. They are his top group of donors by profession, followed by servers, bartenders and cooks, and then nurses and caregivers, according to his campaign.

While former Vice President Joe Biden and Sen. Elizabeth Warren (D - Mass.) previously led an internal poll conducted by the American Federation of Teachers, the nation’s second largest teachers union, they have received fewer donations from this group of professionals, indicating that even if support is more widespread, it may be less intense. Warren ― who spent time working as a public school teacher ― has received the second highest amount of money from K-12 teachers, at $875,000 (she has received more donations from professors than any other candidate). Biden, on the other hand, has only received $393,000 from this group, according to the numbers from the Center for Responsive Politics.

HuffPost spoke to eight K-12 teachers around the country about why so many teachers seem to be connecting with Sanders. They point to his K-12 education plan, which was released before any other candidate in May 2019, and pushes back on what they see as an effort to privatize public schools; his strong support for widespread social safety nets that would benefit students living in poverty; and his proposals for free college and canceling student debt, the latter of which they say resonates especially with professionals who dedicate their lives to public service.

But some, notably, also cited his strong support for unions and pointed to overlapping ethos’ between his campaign and the movement of teacher strikes that has swept cities and states in the past few years.

“The teacher strike wave over the last two years is one of the most important political developments in the country and certainly for the labor movement,” said Eric Blanc, a surrogate for the Sanders campaign who wrote a book about the teacher strikes. “Something about participating in a movement like that, in a strike, raises your confidence and expectations for what you deserve and can win.”

Indeed, for some teachers, like Nash, as well as Nicole McCormick in West Virginia, Sanders’ 2016 presidential campaign and the teacher strikes are inextricably linked.

McCormick, president of her local education association in Mercer County, says she used to feel politically disconnected. She didn’t see her views on income inequality, health care or public education represented by any mainstream candidate. That changed after Sanders’ first presidential campaign.

“To see there were hundreds of thousands of people if not more who felt the same way I did about income inequality … I just started looking at things differently,” said McCormick, a middle school music teacher, who has been teaching for 11 years.

McCormick was quick to get involved with organizing the West Virginia teachers strike in 2018 via a secret Facebook group that allowed educators to swap stories and plan actions. She suspects that support for Sanders across the state ― he beat Clinton in West Virginia during the 2016 Democratic primary ― helped prime the public with hope for something better.

“When we went into that strike it’s like, I had that feeling of solidarity,” she said. “I was reaffirmed that people shared my values whenever we started escalating action for the strike.” 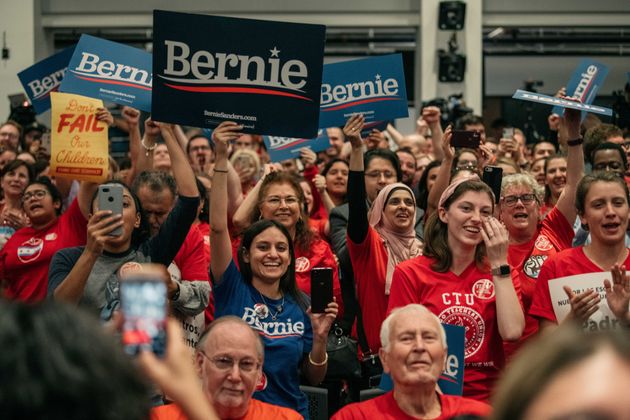 The teachers HuffPost interviewed  ― who, in most cases, worked in high-poverty schools ― also connect their support of Sanders to their firsthand view of the uneven playing field that starts at birth between rich and poor students.

“So many of my students, their parents are barely making it. If health care wasn’t tied to their job or wages were better … they could have a parent there to help them with homework,” said McCormick.

There has been a race to gain the support of teachers among all Democratic campaigns, with most candidates engaging in extensive outreach with unions. Candidates like Sanders and Warren have specifically aimed to support striking teachers.

Sanders has written op-eds in local newspapers in support of this group and held solidarity events, encouraging its long list of supporters to show up to picket lines to support teachers, according to Heather Gautney, the Sanders campaign education policy adviser. Warren has also consistently expressed her support for striking teachers, and both the candidates showed up in Chicago recently to back teachers who went on strike this past fall.

“Education has not been made a priority so therefore teachers aren’t treated like professionals,” said Nash. “I think [Sanders] is the best one making those connections.”