The US plan to evacuate Americans and their families from the Diamond Princess cruise ship appears, on its face, to be the case of a powerful government coming to the aid of its most vulnerable citizens.

The US plan to evacuate Americans and their families from the Diamond Princess cruise ship appears, on its face, to be the case of a powerful government coming to the aid of its most vulnerable citizens.

But the decision has prompted anger from some exhausted passengers, who believe the move could actually set back their ability to return to normal life - just as that option was within their grasp.

Thousands of people have been stuck in their cabins under mandatory quarantine aboard the Diamond Princess, which is docked off the Japanese port city of Yokohama, since February 3.

With 356 confirmed cases of coronavirus on board, 70 of which were announced Sunday, the ship has the largest concentration of novel coronavirus cases outside mainland China. On February 19, the controversial quarantine period was set to finally end.

Until Saturday (local time), the US government seemed on board with that plan. The consensus among government agencies, which had been communicated to the more than 400 Americans aboard, was that remaining on the ship for the quarantine period was the best course of action.

Most passengers weren't thrilled but accepted the plan.

After the quarantine, virus-free passengers were told they could take commercial flights back to the US.

Then came the email.

On Saturday afternoon, the US Embassy in Tokyo sent a notice to Americans on board the Diamond Princess laying out plans to evacuate nearly 400 Americans back home.

Once there, another 14 days of mandatory quarantine would begin. Anyone who chose not to get on the flight would have to wait another 14 days in Japan to ensure they were symptom-free before returning to the US.

That decision has prompted anger among the American passengers, with many demanding answers to two simple questions about the US response: Why did the American government wait so long to make the about-face decision? What prompted such a dramatic shift in US policy? On February 18, the Japanese government plans to begin testing all those who remain on board for the virus. Results should be provided within three days. From February 21, staggered disembarkations would begin.

But American passengers who are evacuated will not be tested.

"From tragedy to comedy to farce," tweeted American passenger Matthew Smith, pulling no punches. "The US government instead wants to take us off without testing, fly us back to the US with a bunch of other untested people, and then stick us in 2 more weeks of quarantine? How does that make any sense at all?"

Those who decide not to board the flight will still have to spend two weeks in Japan before being able to head home.

For Karey Mansicalco, who owns a real estate company in Utah, the news yanked freedom from her hands at the 11th hour.

"It's like a prison sentence for something I did not do," she told CNN from her cabin. "They are holding us hostage for absolutely no reason."

Mansicalco said another two weeks away from home would cost her upwards of $50,000 (AUD $74,000). "It is financially devastating as well as emotionally devastating. I was in tears when I got the news and ... I did not have the words to explain how I felt. And now I just feel angry," she said.

"We are spinning out of control again," said Kent Frasure, whose wife Rebecca tested positive last week and was moved to a Tokyo hospital. "I would not get on a flight without Rebecca." 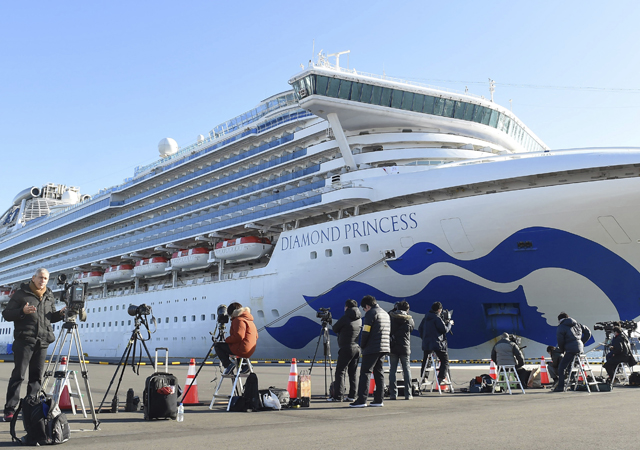 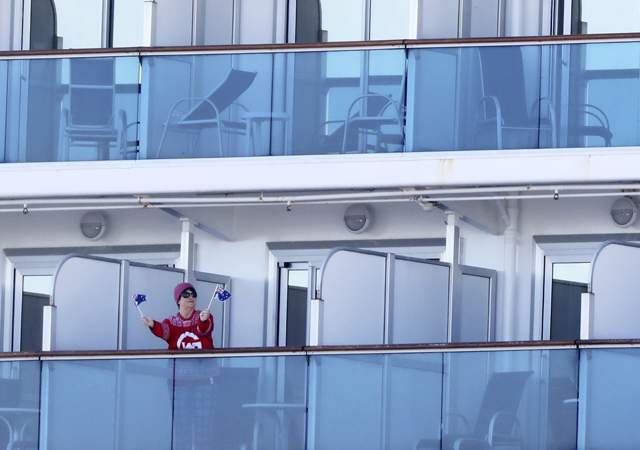 One reason the passengers are so upset is because, as early as last week, experts had been questioning the Japanese government's decision to quarantine people on the ship.

"I don't understand why they have to be kept on a ship," said Peter Hotez, of the Baylor College of Medicine. "We're employing what I call 14th-century approaches and ethics to individuals with transmissible disease."

The abrupt change in US policy led some to believe that Washington lost faith in the effectiveness of the Japanese response. Earlier this week, it emerged that some 1000 crew on board the ship had not been kept in quarantine, eating meals together with masks off and working side by side.

The American move has put pressure on other governments with citizens on board the ship to respond.

Rose Yerex, a Canadian who along with her husband has struck a decidedly positive tone throughout the quarantine, could not hold back her anger on Saturday.

"It really kind of shows the difference here between the two countries," she said. "So, hey, congratulations to you guys who are Americans and you are getting to leave. Your government is supporting you, ours isn't."

READ:  Latest in a series of incidents in Iran: Gas explosion shakes building in Tehran

On Sunday, the Canadian government announced its own evacuation plan. The Hong Kong government also announced that it was arranging a chartered flight to bring home residents free of charge as soon they were permitted to disembark.

But perhaps worst off are the Diamond Princess crew.

After some crew members issued desperate pleas for help, Princess Cruises told them on Saturday that once all passengers had left the ship, they would have to endure their own 14-day quarantine.

"It is disappointing for all of us," said Jan Swartz, president of Princess Cruises.

On Sunday, Princess Cruises announced it would cancel voyages aboard the Diamond Princess through April 20 because of the prolonged quarantine period.

Customers with questions about their itineraries are being asked to consult the Itinerary Modifications and Cancellations page on the company's website.

"We ask that you please minimize calling our call centre for itinerary change information as we work through all the travel changes and subsequent impacts on itineraries. Thank you for your patience and understanding," the company tweeted.