CBS on Sunday night released the first preview for Oprah Winfrey’s upcoming primetime interview with Prince Harry and Meghan Markle.The Duke and Duchess of Sussex will appear together on March 7 for the intervie… 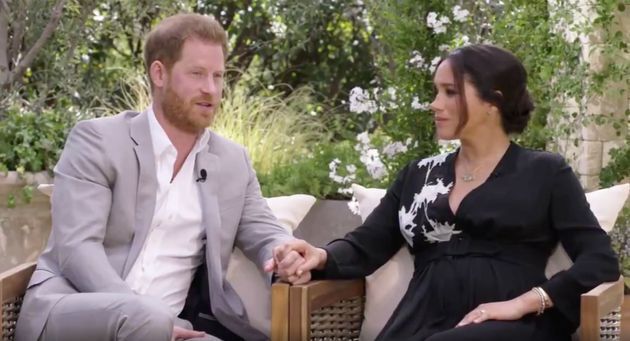 The Duke and Duchess of Sussex will appear together on March 7 for the interview, called “Oprah with Meghan and Harry.” According to a release shared with HuffPost, the formerly 90-minute interview has now been extended to two hours, from 8 pm to 10 pm Eastern.

In one of the clips, Oprah asks Meghan, “Were you silent or were you silenced?” before discussing a “breaking point.”

In another clip released by CBS, the Duke of Sussex speaks about his late mother.

“I’m just really relieved and happy to be sitting here, talking to you with my wife by my side. Because I can’t begin to imagine what it must’ve been like for her going through this process by herself all those years ago,” the prince says as an image of Princess Diana holding a young Harry flashes across the screen.

“Because it has been unbelievably tough for the two of us, but at least we had each other,” the duke added.

In a statement shared with HuffPost earlier this month, CBS revealed what topics will be covered in the interview.

“Winfrey will speak with Meghan, The Duchess of Sussex, in a wide-ranging interview, covering everything from stepping into life as a Royal, marriage, motherhood, philanthropic work to how she is handling life under intense public pressure,” the statement said. “Later, the two are joined by Prince Harry as they speak about their move to the United States and their future hopes and dreams for their expanding family.”

It’s the first on-camera interview for the couple since they announced their plans to step back as working members of the royal family in January 2020.

Gayle King previously revealed on “CBS This Morning” that “nothing is off limits” in Winfrey’s interview with the royals.

“I’ve heard from reliable sources — this is Oprah talking — that it’s the best interview she’s ever done,” King added, according to People. “I think that’s saying something.”