In the province of Brecia, the centre of the coronavirus outbreak in Italy, a 73-year-old doctor named Gino Fasoli came out of retirement to help treat patients amid the growing crisis.

On March 6, he told his brother that he was feeling unwell, with a headache and fever. By March 10, his condition had worsened. “I can’t speak,” Fasoli said. Soon, he was transferred to the hospital, where he tested positive for COVID-19. Doctors were unable to save him.

“At 8 o’clock on the 14th they called me from the hospital to tell me he was dead,” his brother said.

On Tuesday, Italy’s federation of doctors announced that 24 doctors have died so far from the coronavirus. According to Italy’s national health institute, 4,824 health care workers have been infected, twice as many as in China.

In Spain, the health ministry announced this week that out of 40,000 confirmed cases of coronavirus in the country, 5,400 — nearly 14% — are medical professionals. In France, five doctors have died from the virus as well.

“We are at the end of our strength,” said Dr Romano Paolucci, who came out of retirement to help the Oglio Po hospital near Cremona, one of the worst-hit towns in northern Italy’s Lombardy region. “We do not have sufficient resources and especially staff, because apart from everything else, now the staff are beginning to get sick.”

As the number of coronavirus cases grows across Europe and the United States, health care workers on the front lines say they feel like they are being treated like “cannon fodder,” as the head of a British professional group put it.

“I’m risking my life and the life of my family,” said Joan Pons Laplana, a nurse who works for the National Health Service in the United Kingdom. “I’m going to work, because I love helping other people. But I want the government to equip me properly – it feels like they’re sending soldiers to fight with water pistols. It’s unbelievable.” 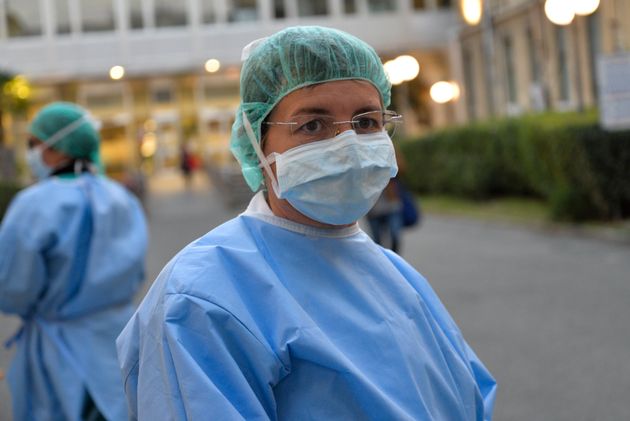 “The main problem is the supply itself, which is one of the most dramatic points of this crisis,” Francesco Rocca, president of the Italian Red Cross, told HuffPost Italy.

“It is not only about masks, but also about overalls, face shields, everything you need to protect yourself with. No matter how careful you are when dressing and how much the vehicle is sterilised after each service, it is always a difficult situation.”

Rocca said that at least four Red Cross volunteers were in intensive care in Lombardy, and several dozen were quarantined.

The situation in Europe stands as a stark warning for what health care professionals in the United States are likely to face as the number of coronavirus cases increases, hospitals become overwhelmed, and supplies of personal protective equipment dwindle.

Already, two emergency room doctors ― one in New Jersey and one in Washington state ― have been hospitalised in critical condition because of coronavirus. And in New York, where the number of coronavirus cases has soared, hospitals have been burning through about 40,000 masks a day — about 10 times the normal amount — and have begun limiting staff members to just one each day.

“If we run out of it, it’s like sending a soldier into war where everyone else has armor and we don’t have armor,” said Dr Joseph Habboushe, an emergency room physician at NYU Langone Medical Center.

Columbia University chief surgeon Dr Craig Smith wrote in a note to colleagues this week: “To think we could mimic Italy seemed risible a week ago. Not today.”

California is also scrambling to obtain protective gear for health care workers and first responders, reaching out worldwide and working with locals to ratchet up production as the coronavirus pandemic continues to sweep through the nation’s most populous state.

The state is looking at ways of acquiring some 1 billion sets of gloves, along with hundreds of millions of gowns, surgical masks, and face shields, Gov. Gavin Newsom said Monday.

Without protective gear, doctors and nurses may be forced to choose between their jobs and their own health, and the health of their family members.

“I’ve got an immunocompromised husband. Without PPE I put him at risk every single day. If this is not sorted soon then I’m off,” one doctor in the United Kingdom told the Doctors’ Association UK.

“The government needs to protect frontline health workers and in return they will give 100%,” said Dr Rinesh Parmar, the group’s chair. “But the government hasn’t kept its side of the bargain with NHS staff by not having enough PPE available to safeguard the health of doctors and nurses.”

Some doctors have continued to work despite a lack of protective equipment, however.

In Madrid, HuffPost Spain spoke with two nurses aides at the Infanta Sofia Hospital, who said that they were making their own personal protective equipment, and that their colleagues in the ICU were overwhelmed.

The hospitals in Madrid are so overcrowded that they have had to open a temporary care facility in the city’s fairgrounds.

In Italy, Marcello Natali, a 57-year-old doctor, tested positive for coronavirus while working in the town of Codogno, in the northern part of the country. As his condition worsened, he was transferred to a hospital in Milan for treatment, but he later died.

In an interview with Euronews, Natali said he had had to work without gloves.