Harvey Weinstein considered himself such a big shot in Hollywood that he thought he could get away with treating aspiring actresses like "complete disposables", a prosecutor told a jury in closing arguments at his New York City rape trial.

"The universe is run by me and they don't get to complain when they get stepped on, spit on, demoralised and, yes, raped and abused by me – the king," Joan Illuzzi-Orbon said, mimicking Weinstein.

Using a TV monitor next to the jury box, the prosecutors displayed photos of "Sopranos" actress Annabella Sciorra and five other accusers who also testified. 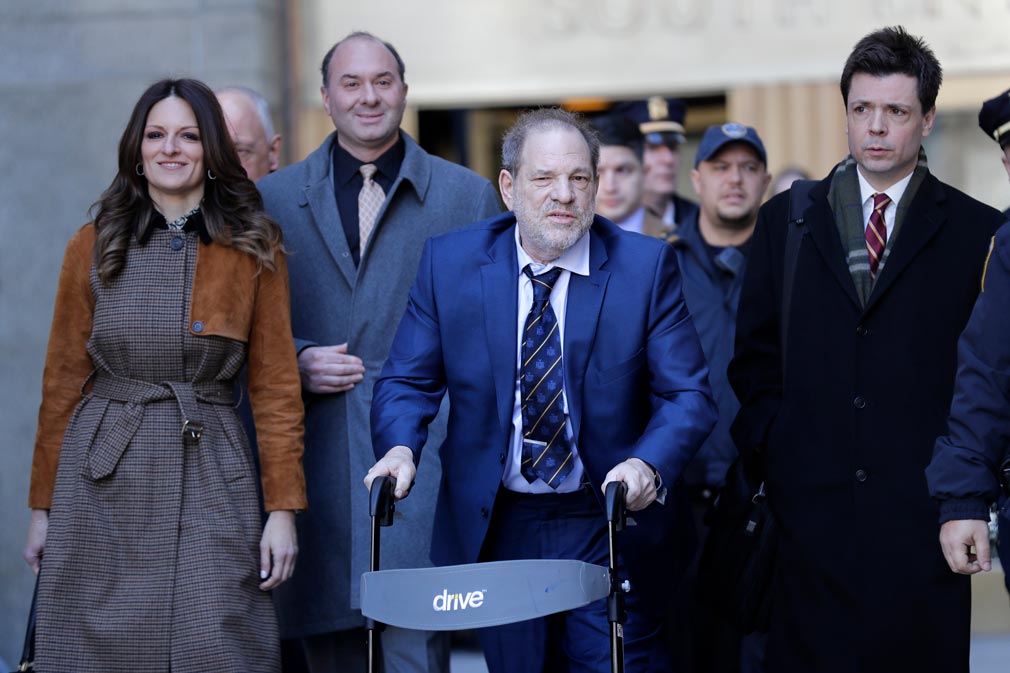 Ms Illuzzi told jurors that aside from the more successful Sciorra, the others were "complete disposables. They were never going to be in his world".

Ms Illuzzi also showed a side-by-side comparison of Sciorra's testimony about confronting Weinstein in the mid-1990s after he allegedly raped her and similar testimony by his rape accuser about how the mogul reacted when she told him she had a boyfriend in 2013.

"His eyes went black and I thought he was going to hit me right there," Sciorra testified.

With the click of a button, the rape accuser's testimony popped up: "His eyes changed and he was not there. They were very black and he ripped me up".

At times, Weinstein sat back in his chair staring ahead at a screen in front of the defense table that mirrored what was being shown to the seven men and five women on the jury during the three-hour summation. 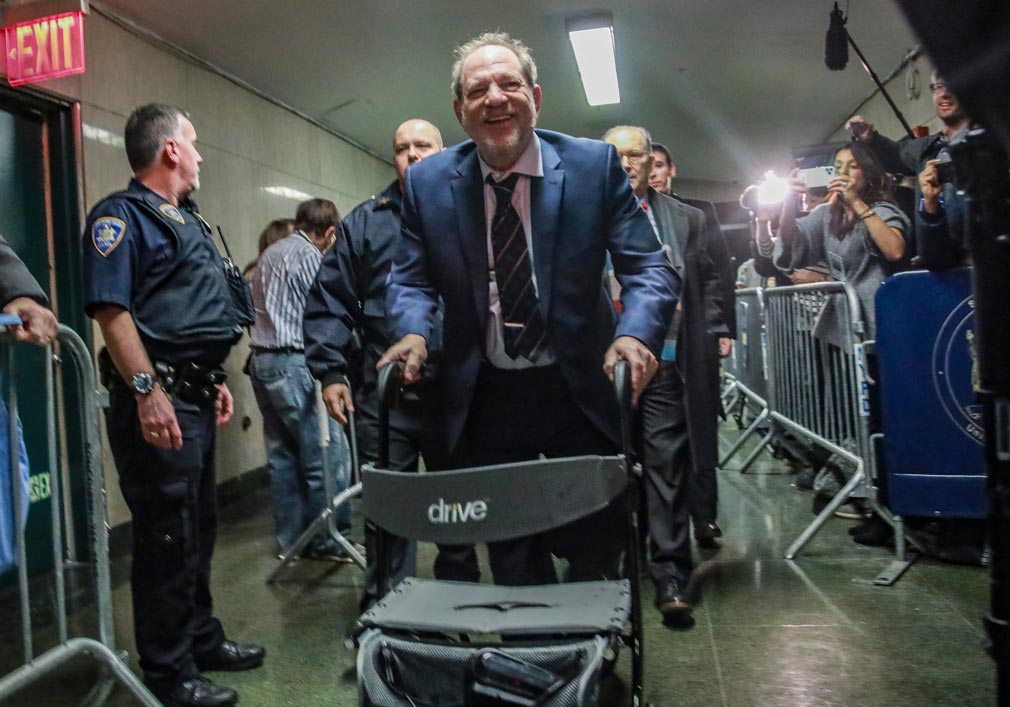 Where the trial currently stands

Prosecutors created an "alternate universe" that "strips adult women of common sense, autonomy, and responsibility... Regret does not exist in this world, only regret renamed as rape", Weinstein lawyer Donna Rotunno argued.

Ms Illuzzi countered by focusing on allegations by Mimi Haleyi that Weinstein forcibly performed oral sex on her in his Soho apartment in 2006.

"When an adult goes to another adult's home, should they expect that they have to engage in sex?" the prosecutor asked.

"By going to Harvey Weinstein's home, did she deserve what she got?"

She added: "There are no blurred lines here. This is a crime and a wanton disregard of other people".

The jury was sent home for the day, with deliberations set to begin Tuesday. 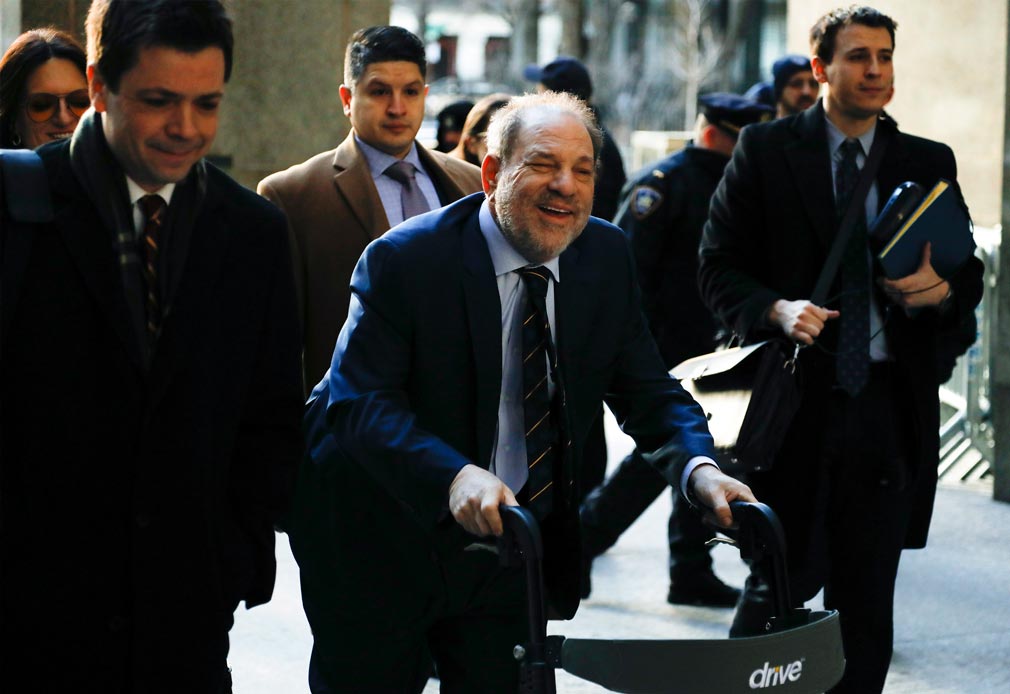 What Weinstein is being charged with

Weinstein, 67, is charged with raping a woman in a Manhattan hotel room in 2013 and forcibly performing oral sex on Haleyi in 2006.

The Associated Press has a policy of not publishing the names of people who allege sexual assault without their consent; it is withholding the name of the rape accuser because it isn't clear if she wishes to be identified publicly.

Other accusers including Sciorra testified as part of a prosecution effort to show he used the same tactics to victimise many women over the years.

Some women testified that Weinstein ignored pleas of "no, no, no" as he assaulted them.

The woman Weinstein is charged with raping said he would turn violent when he couldn't get his way and that, "If he heard the word 'no,' it was like a trigger for him".

Another woman recalled Weinstein sneering, "You'll never make it in this business, this is how this industry works", when she laughed off his advances.

The prosecution's task has been complicated because the women he's charged with raping kept in contact with Weinstein after the alleged encounters.

But Ms lluzzi said that part of his scheme was to keep in contact with them so he could point to those encounters as evidence nothing happened, essentially "preparing for a moment just like this".

Case in point, she said: In October 2017, Weinstein replied to an email from a publicist giving him a heads up that Sciorra was about to go public in a Ronan Farrow story by writing: "Annabella did cop land".

Instructing his publicist on how to respond to the article, Weinstein wrote: "this was consensual or deny it".

"I submit to you that was a confession," Ms Illuzzi told jurors over the defense's denied objection.