A severe thunderstorm has descended on the east coast after wreaking havoc on Australia’s capital earlier today.

A severe thunderstorm has paved Australia's capital white with massive hail, leaving a trail of broken car windows and debris.

The series of storms then rolled east, hammering large swathes of NSW along the way.

The erratic weather system also rocked Queensland, with more than 18,000 properties were left without power.

In Victoria, the SES had 1824 calls for help as the storms hit Melbourne and damaged multiple buildings. In Canberra, emergency services had been responded to 1,750 call-outs with many more expected tonight.

Photos showed the chaotic scenes as trees came down, windows smashed, people ran for cover and the lawns at Parliament House were covered with ice the size of golf balls.

The Bureau of Meteorology has warned there are several storm cells moving over NSW which are producing damaging, destructive winds, torrential rain, dangerous surf and the same large hailstones that lashed Canberra.

A roof was ripped off a building at Bringelly, west of Sydney, which flew across a busy road and came crashing down on traffic.

Hail began falling in Sydney's south late this afternoon, with train services delayed near Cronulla due to debris on the tracks and warnings for drivers to stay safe on the roads as trees and powerlines fell across several main roads.

In Mortdale, hundreds of commuters were stranded with train services not running and no buses to replace them. 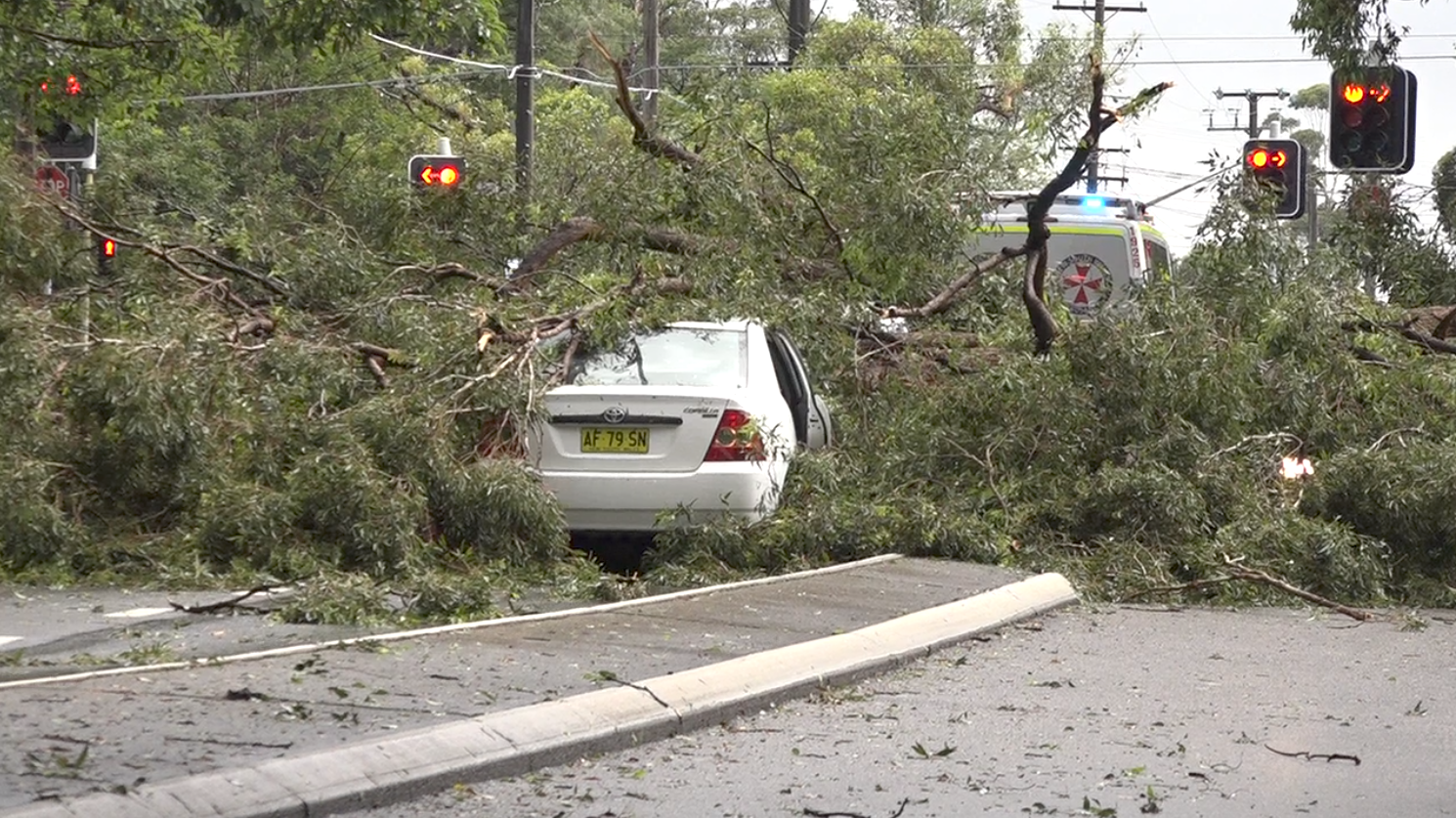 Sydney's north is also copping a lashing with Manly, Mosman and the Upper North Shore also getting hit by the hail.

Suburbs including Campbelltown, Gregory Hills and Oran Park had reports of the hail earlier this afternoon.

Coastal areas including regions between Newcastle's north right down to the NSW-Victoria border are also going to be affected.

Total fire bans are also in place for parts of the state with strong winds expected to accompany the storms.

Heavy rain, damaging winds and hailstorms have also hit Victoria, with severe weather warnings in place for much of the state.

There have been close to 2,000 calls for assistance from emergency services since 2pm yesterday, when storms first hit the state and with thunderstorm and flash-flood warnings in place for tonight, authorities expect this number to grow.

Flash-flooding has already started in Pakenham and surrounding areas with residents warned they are in danger and should remain indoors and avoid driving in floodwaters.

Regions in the north and northeast are at most risk this evening.

Yesterday, Melbourne and regional areas were smashed with hailstones as big as tennis balls.

Queensland's southeast will also feel the brunt of today's severe weather warnings after massive downpours already caused flash flooding in parts of the state at the weekend.

Storms are forecast for the state's southeast after as much as 350mm of rain fell in some areas on Saturday and Sunday.

Severe thunderstorms have developed near Ipswich and are moving southeast through the Scenic Rim.

Damaging winds and heavy rain are expected near Laidley and Grandchester and are expected to affect Harrisville and Boonah within the hour.

The Bureau of Meteorology warns flash flooding is likely.

Persistent thunderstorms across eastern parts of the state over the past week have brought some much-needed rainfall, with particularly heavy falls on the Gold Coast which recorded 300mm on Friday night and Saturday morning.

Brisbane could see up to 30mm of rain today according the weather bureau after heavy falls caused flash flooding, which shut down major roads and caused delays. 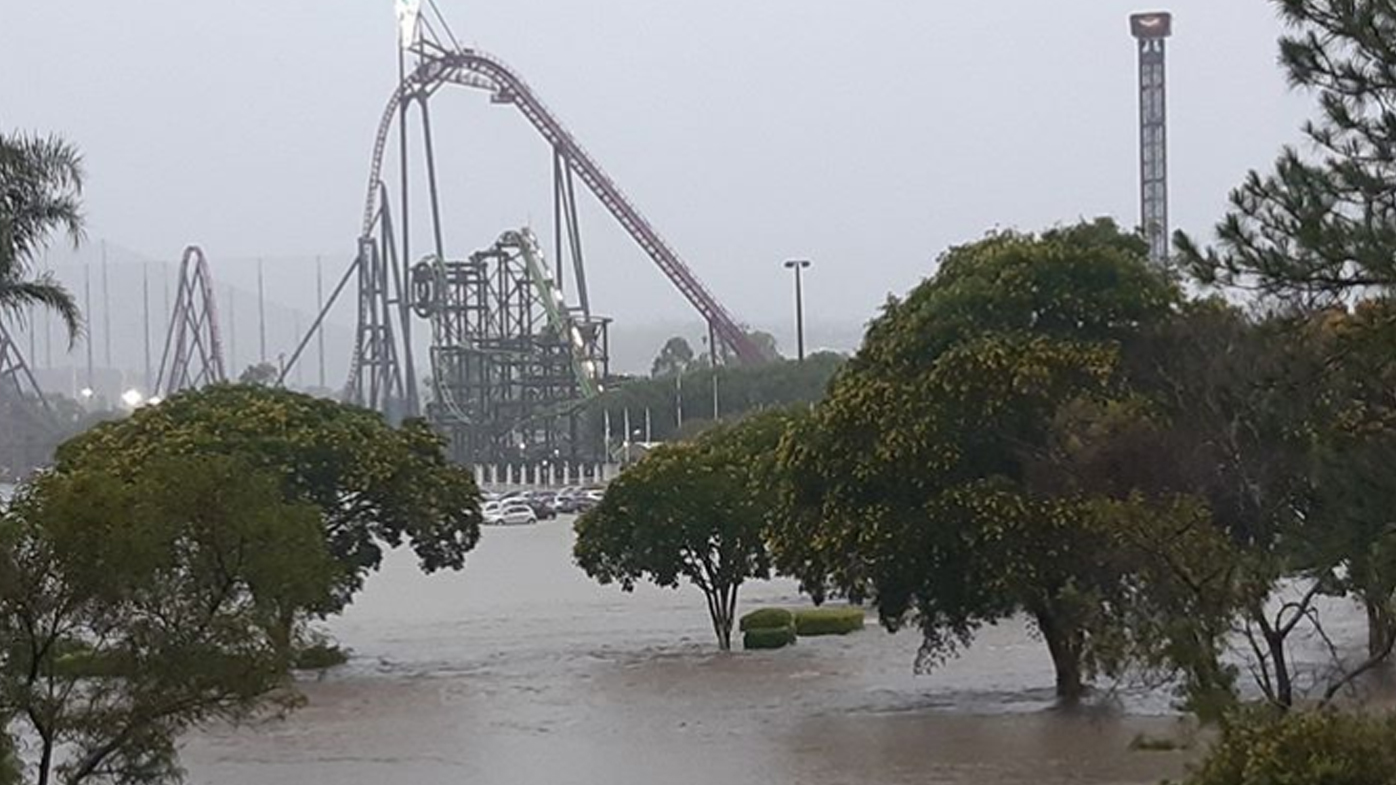 While the storms could pose a threat for many areas, the mass downpour did provide some relief for drought-stricken regions.

READ:  Tas That Was – Learning the Piano

Leslie Harrison Dam near Warwick is almost at 60 per cent according to Seqwater, up from 53.9 per cent.

How the rest of the country will fair

Showers are persisting in South Australia's Adelaide Hills after a wet weekend in the state, however these should ease later this evening.

Possible thunderstorms are forecast east of the Mount Lofty Ranges with a moderate southerly hitting the Riverland region later.

Large parts of Tasmania are also set for a wet week with chances of a shower today and wet weather and heavy cloud likely to carry through to the weekend. 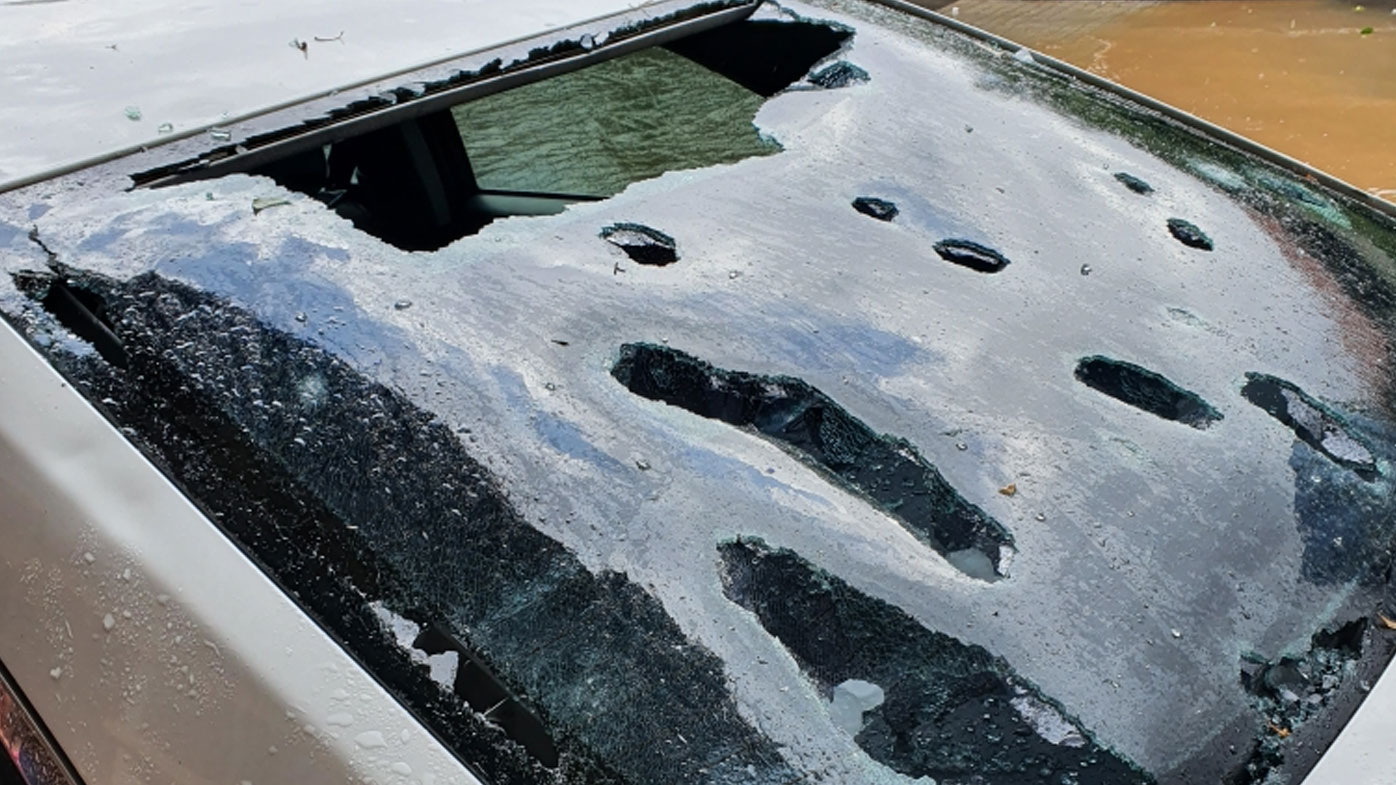 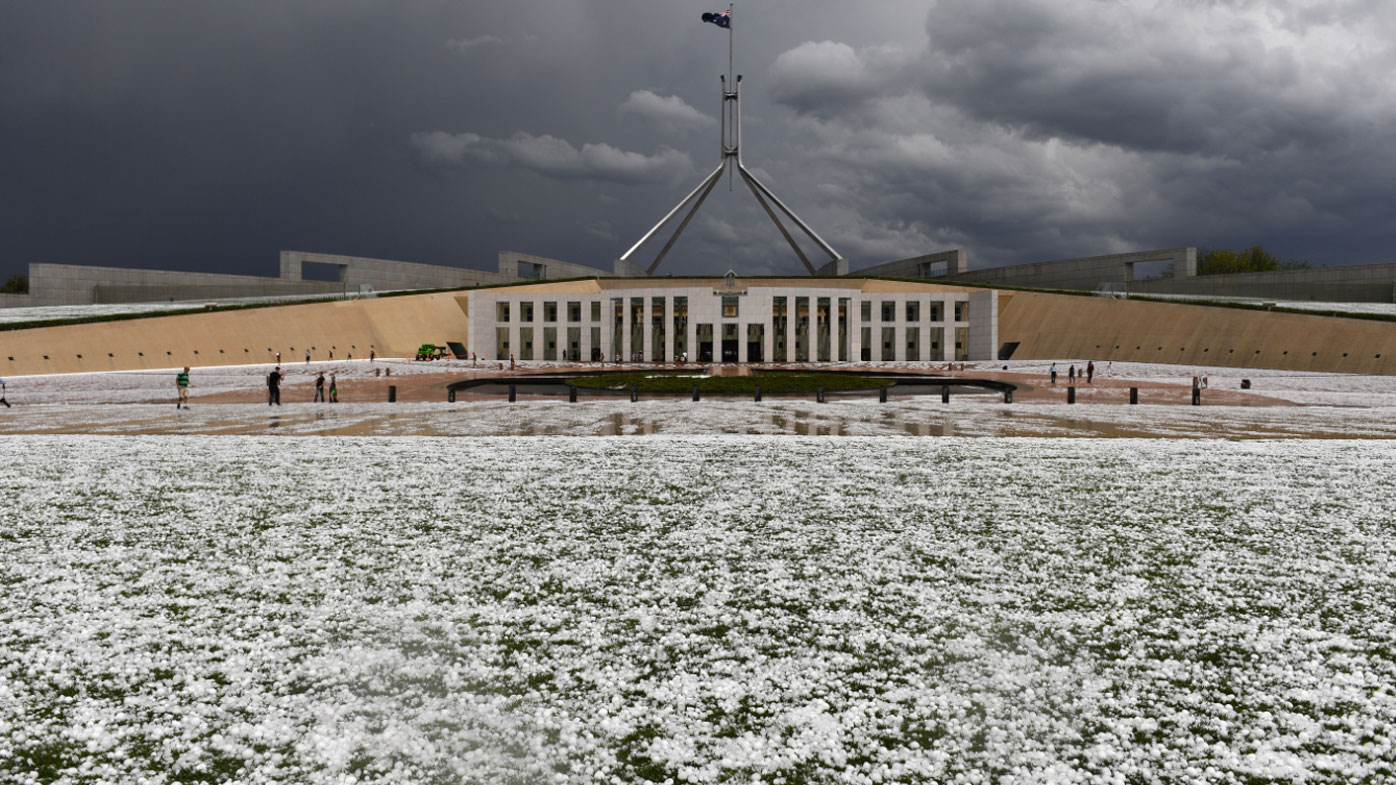 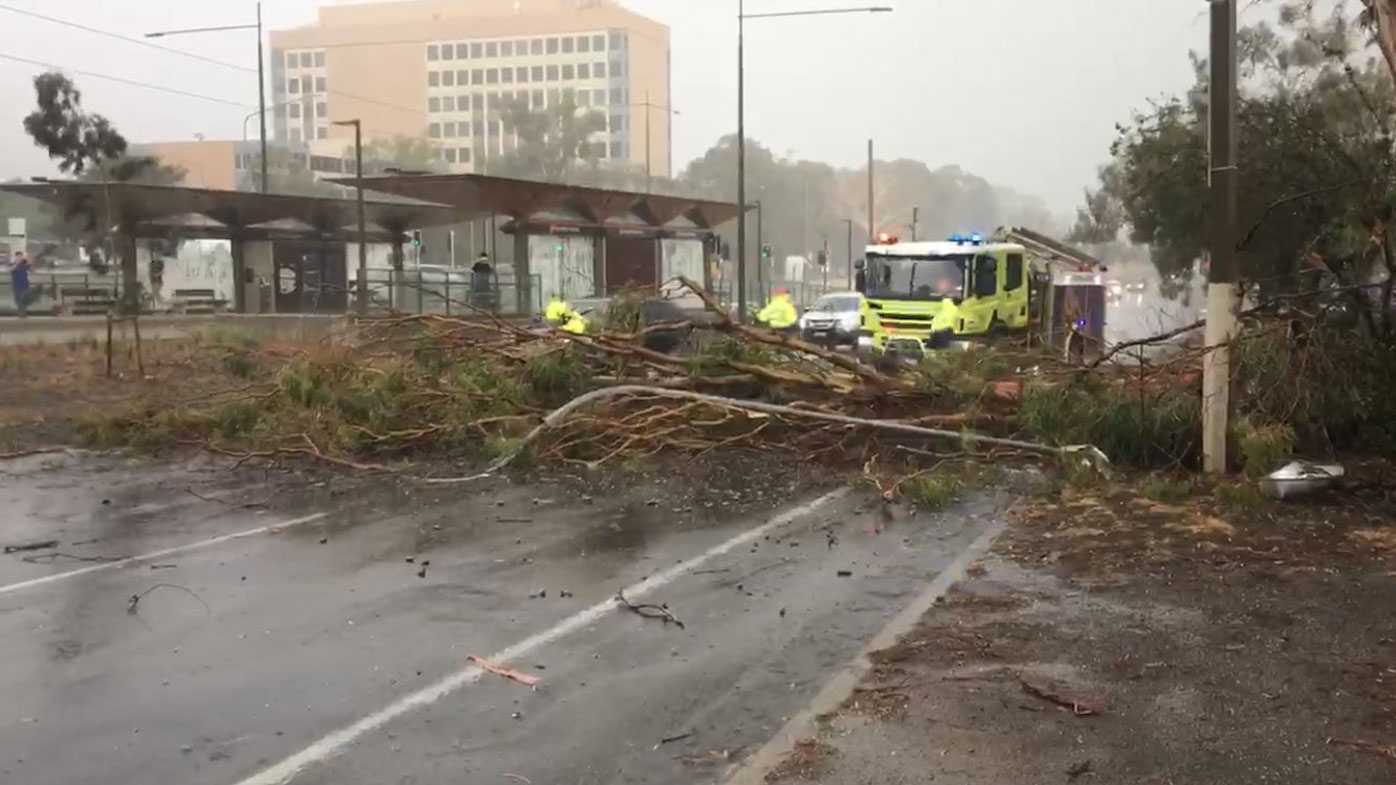 While most of Western Australia has endured warm temperatures in the mid to high 30s today, thunderstorms are forecast for the Kimberley, Northwest Gascoyne and Pilbara regions later today.