Greta Thunberg has blasted global elites for not doing enough to deal with the climate emergency as the teenage activist told the World Economic Forum in Davos: “Our house is still on fire.”The 17-year-old has become a figurehead for a…

Greta Thunberg has blasted global elites for not doing enough to deal with the climate emergency as the teenage activist told the World Economic Forum in Davos: “Our house is still on fire.”

The 17-year-old has become a figurehead for a global climate movement and her appearance on a panel in the Swiss ski resort was a sign of her growing influence on the world’s powerbrokers.

In her address to politicians, NGO leaders and business leaders, Thunberg did not hold back as she told them “your inaction is fuelling the flames by the hour”.

Here are five takeaways from her day in Davos.

1. ‘Planting trees is nowhere near enough’

In the most striking section of her speech, Thunberg said planting trees was not enough to address climate change.

The comment was a thinly-veiled rebuke to a pledge made in Davos by US president Donald Trump, less than an hour earlier, that the US would join an existing initiative to plant one trillion trees.

Thunberg responded by referring to “empty words and promises” by world leaders.

She said: “We are not telling you to keep talking about reaching ‘net zero emissions’ or ‘carbon neutrality’ by cheating and fiddling around with numbers.

“We are not telling you to ‘offset your emissions’ by just paying someone else to plant trees in places like Africa while at the same time forests like the Amazon are being slaughtered at an infinitely higher rate.

“Planting trees is good, of course, but it’s nowhere near enough of what is needed and it cannot replace real mitigation and rewilding nature.”

READ:  Do you need to keep left even if there isn't a road sign?

Three other young climate activists also spoke at the same panel as they said they hoped their generation had found its voice.

The combined age of the panel, which included water, electricity and health activists from Zambia, Puerto Rico and Canada, was 64 – younger than many of those in the audience.

Joining Thunberg among “change-makers” at Davos was Naomi Wadler, a 13-year-old anti-gun campaigner from the United States.

Wearing Doc Martens boots and chequered trousers, Wadler said she hoped to inspire as well as be inspired.

“I think it’s so great that we’re all invited [...] because this is something that hasn’t been done before,” Wadler, the youngest of the youth activists, told Reuters.

“The forum used to be made up of a lot of old, rich white men and so I think it’s really cool that we have so many people of colour.”

Among 10 “change-makers” profiled by the World Economic Forum on its website were Mohamad Al Jounde, 18, a Syrian education campaigner; Autumn Peltier, a 15-year-old Canadian who focuses on water resources; and Ayakha Melithafa, a 17-year-old environmentalist from South Africa.

Thunberg said those in the audience would see the demand as “naive”, but she said she and the children who support her were actually seeking the “bare minimum” necessary by calling for an end to all fossil fuel investment “now”.

She said: “We demand, at this year’s World Economic Forum, participants from all companies, banks, institutions and governments: immediately halt all investments in fossil fuel exploration and extraction.

4. From activist to participant

For Thunberg, now a familiar face globally, her unforgiving speech marked the transition from campaigner to participant.

A year ago she was leading protests at Davos as well as speaking, warning the world that “the house is on fire” – a phrase she repeated on Tuesday.

This year, she was taking part in several high-profile panels, including delivering her speech shortly after Trump gave his keynote speech. 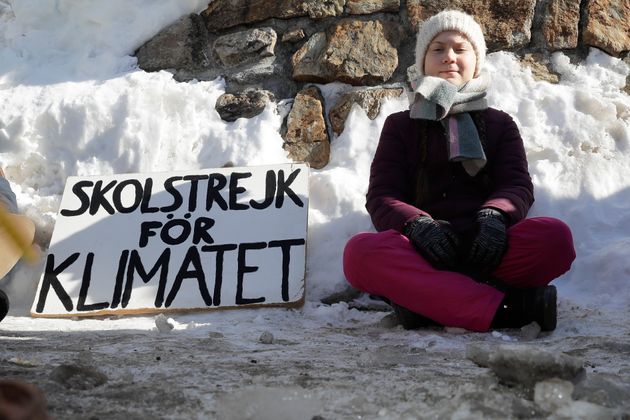 Thunberg has inspired millions to take action on climate change. A video of her giving Trump what media described as a “death stare” at a UN climate summit in New York in September went viral on social media.

She clearly still gets under the skin of the leader of the free world. In his speech, Trump branded climate activists “the heirs of yesterday’s foolish fortune tellers” as he claimed fears about overpopulation in the 1960s and the “end of oil” in the 1990s failed to come true.

Trump dismissed “perennial prophets of doom” on climate change in his address. While he did not directly name Thunberg, she was sitting in the audience for his speech.

Trump insisted that technical innovation, not restricting economic growth, is the way forward. “Fear and doubt is not a good thought process,” he said. “This is not a time for pessimism but a time for optimism.”