Initial footage shot by bystanders showed the jumpers standing on the roof of the building before taking the 40-storey plunge and gliding down to the streets below.

GoPro footage of an infamous jump that saw four men cop heavy fines after parachuting from a Perth building has been released.

The footage was taken back in September, when the four men gained access to the roof of the Exchange Tower on the Perth Esplanade.

Initial footage shot by bystanders showed the jumpers standing on the roof of the building before taking the 40-storey plunge and gliding down to the streets below.

The men were allegedly dressed in suits to blend-in in the Perth CBD, and make it to the roof of the building. Now the new footage - uploaded by Jesse Pearce - shows the behind the scenes of the jump from a first person perspective, thanks to a camera mounted on one of the jumper's helmets. 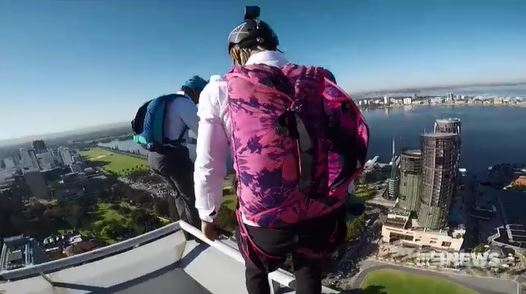 The footage starts with the men high fiving each other before exiting onto the roof of the building.

They can be seen standing precariously on the edge of the building, before jumping one after the other.

Each man seems to pull out all the stops, with one even doing a backflip off the Exchange Tower down to the small patch of grass below. 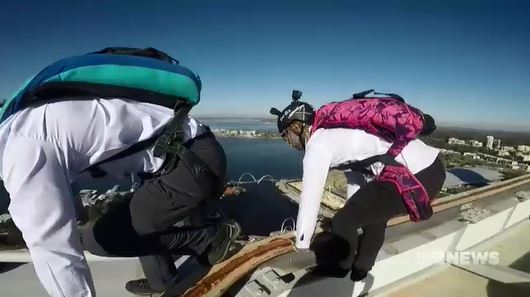 The owner of the GoPro is the last to jump, and as he lands, the men can be seen quickly packing up their parachutes and running from the Elizabeth Quay centre to avoid authorities.

Police said the men left the area in a waiting car, and when they were not immediately arrested over the stunt, they later allegedly taunted police by releasing snippets of GoPro footage of the jump. 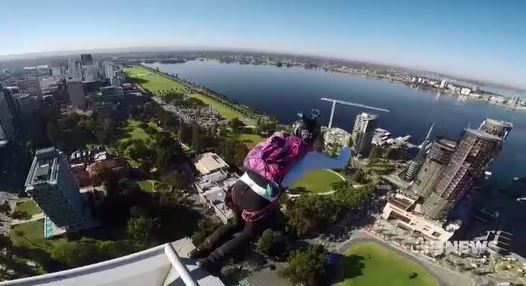 WA Police Commissioner Chris Dawson was quick to condemn the act at the time, and gave the group a harsh warning. "They can either give themselves up or we'll knock on their door," he said.

However police later caught up with all four men involved, and Mr Pearce had to pay a $1600 fine for trespassing.