At least six people have died and 16 others have been injured after a massive sinkhole swallowed up a bus picking up passengers in China.

At least six people have died and 16 others have been injured after a massive sinkhole swallowed up a bus picking up passengers in northwestern China, the latest in a recent string of deadly road collapses in the country.

A public bus had just halted at a stop in the city of Xining, Qinghai province on Monday afternoon when a gaping sinkhole suddenly opened up underneath it, state news agency Xinhua reported.

Dramatic surveillance footage showed passengers boarding the bus when the collapse happened, swallowing the front of the vehicle, a lamppost and people waiting in line, while others at the bus stop fled for their lives. 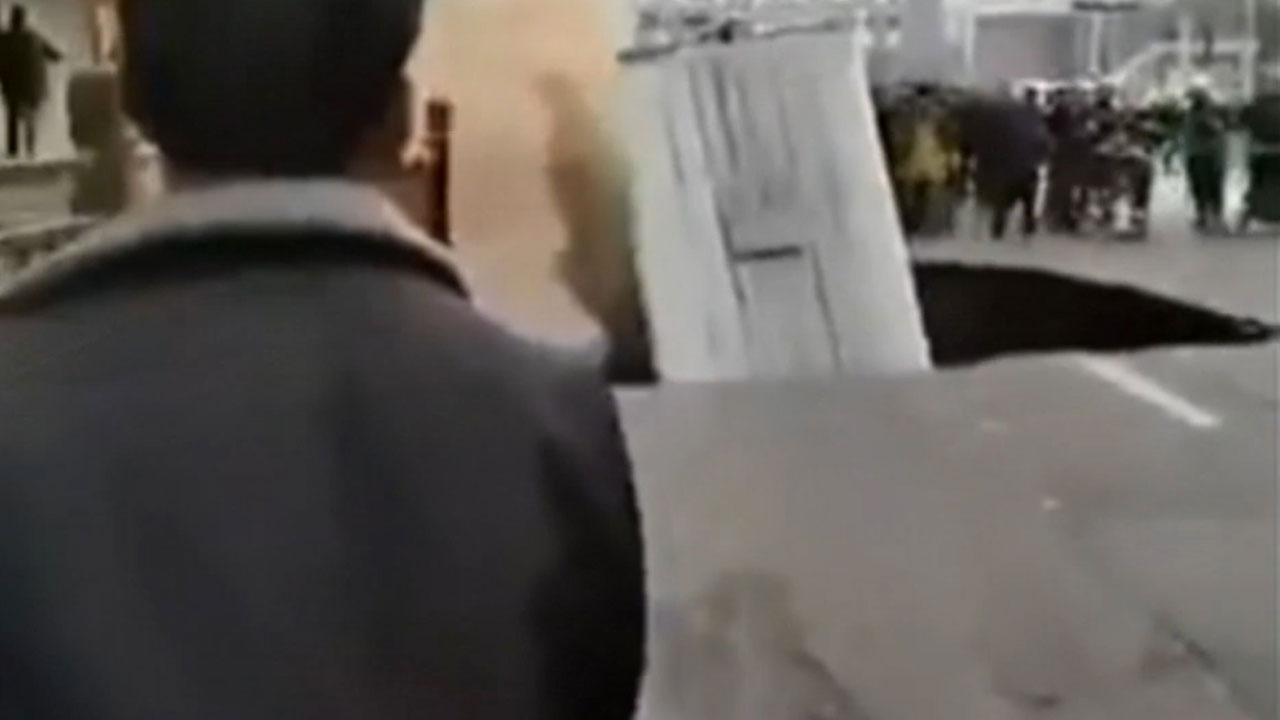 A young man who barely escaped was seen picking up a baby from the edge of the sinkhole and bringing it to safety. He then returned with several others to help a woman left hanging on the edge.

As they tried to pull her up, however, the road collapsed a second time beneath their feet, plunging everyone into the pit. Seconds later, an explosion could be seen inside the sinkhole, sending a ball of fire above ground, followed by a thick plume of smoke and a few smaller explosions.

Search and rescue efforts remain ongoing. A total of six bodies were found and 16 people are being treated in hospital, the Xining municipal government said at a news conference on Tuesday morning.

Government officials estimated that the sinkhole covers an area of about 80 square metres Images from the scene early Tuesday showed rescue workers lifting the bus out of the hole using a large crane.

Passerby Sun Wanhong, a retired armed police officer, was among the group of people who tried to help the woman out of the sinkhole, but ended up falling in themselves after the road caved in again.

"I heard someone shouting 'Help! Help!' and ran over. I saw a person hanging on the edge, so I reached out my hand to grab her. As soon as I reached her, (the road) collapsed again and there was nothing at the bottom, and several people who were helping out with me fell through," he told state-run news magazine China Newsweek. 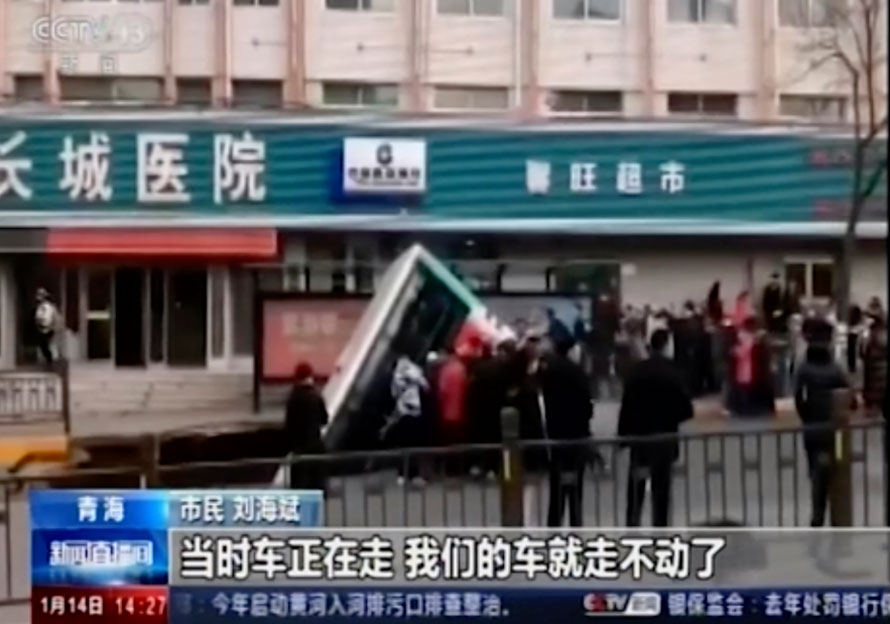 "There was water running above, and an explosion took off due to the electricity cable. The sound was huge ... a water pipe broke, and water poured in," he said.

Sun pulled out a teenager stuck in sludge at the bottom of the pit, and held another child in his arms as they tried to walk up to the edge to climb up. Sun suffered multiple bone fractures and is being treated in hospital, the report said.

The collapse took place on a busy main street in the city centre of Xining, the provincial capital and largest city in the far northwestern province of Qinghai.

Authorities are still investigating the cause of the collapse. But the incident has drawn outrage online, with many questioning why sinkholes keep appearing in Chinese cities. 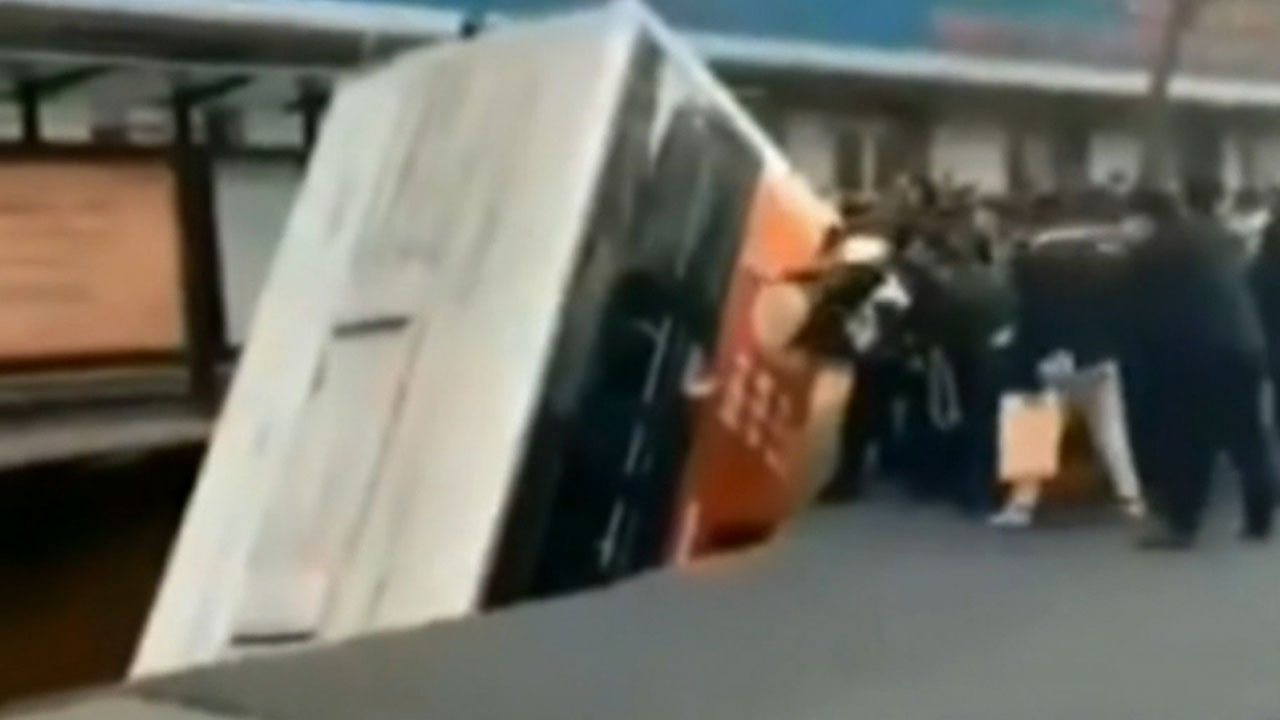 Sinkholes typically form when acidic rainwater dissolves limestone or similar rock beneath the soil, leaving a large void that collapses when it's no longer able to support the weight of what's above - whether that be an open field, a road or a house.

But there are also mounting concerns that poor safety standards of public construction projects in Chinese cities - which have expanded rapidly in recent decades - could have played a role in some cases.