Floyd’s funeral will be held on Tuesday, followed by burial, where he will be laid to rest next to his mother, Larcenia Floyd.

The casket carrying the body of George Floyd has arrived at a church in his native Houston as the series of memorials in his honour reach their final stop.

The six-hour viewing is open to the public, though visitors will be required to wear a mask and gloves to comply with coronavirus-related guidelines – 15 guests at a time have been allowed inside for no more than 10 minutes each after viewing the body. 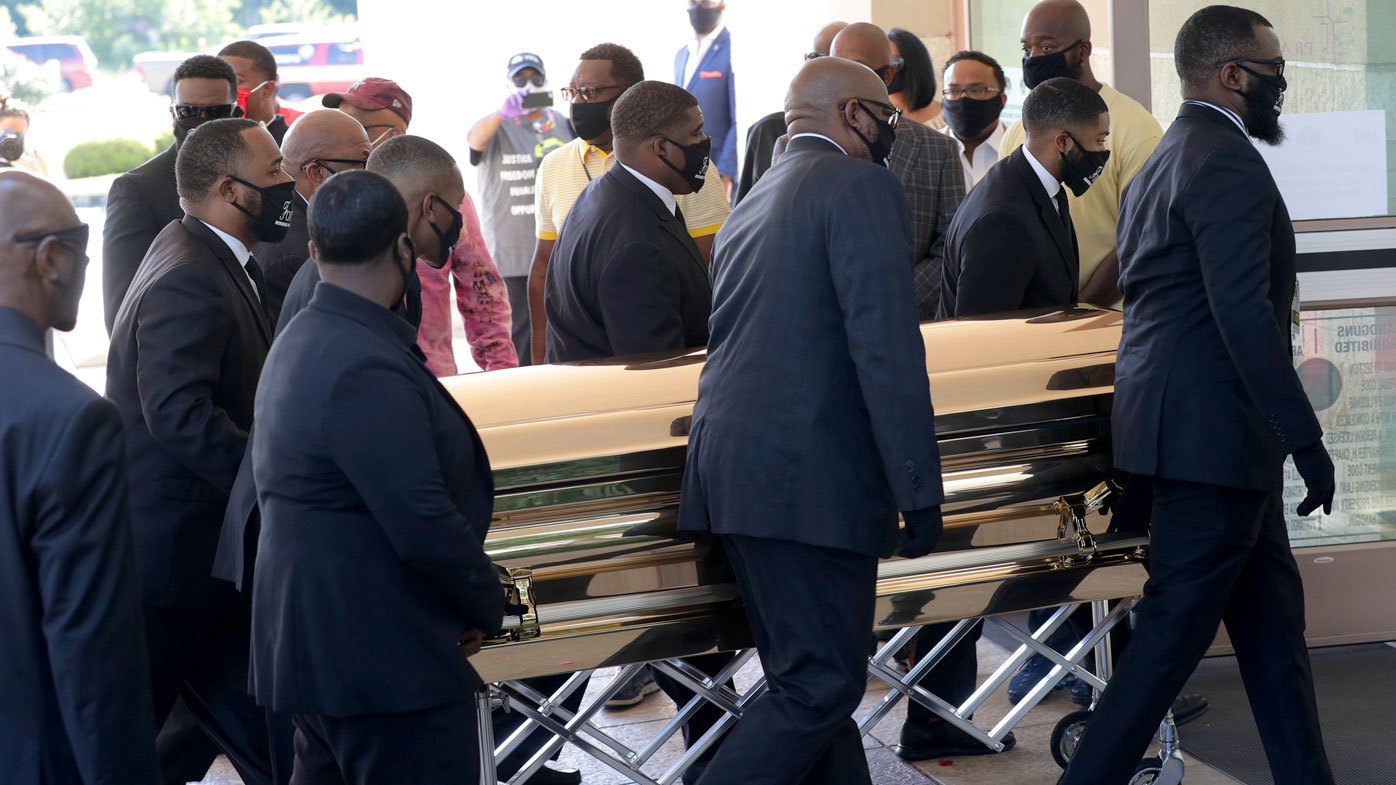 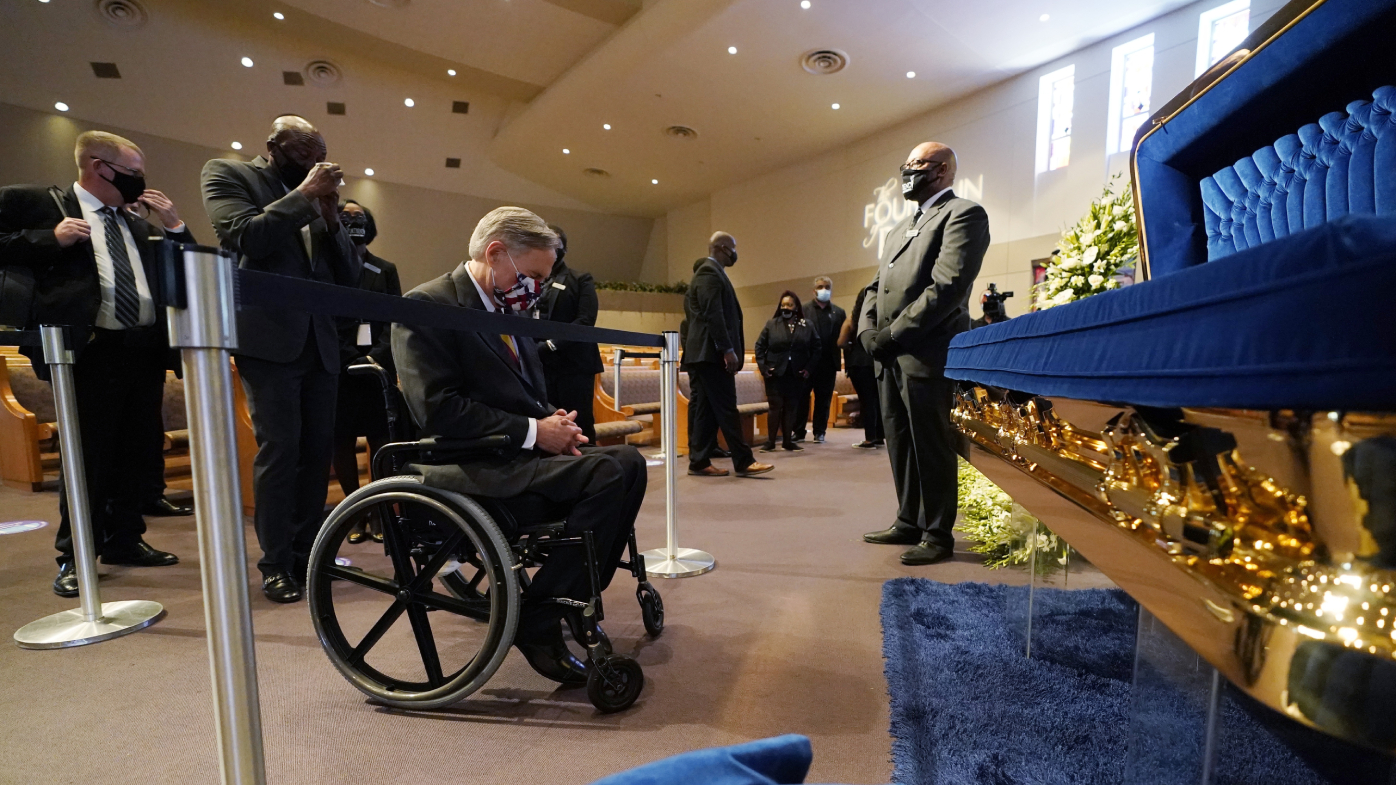 Hundreds of mourners lined up outside a church in George Floyd's native Houston for a final public viewing Monday as his death two weeks ago at the hands of police continued spurring protesters, leaders and cities around the world into action over demands to address racial injustice and police brutality.

As the doors opened at The Fountain of Praise church in Houston, where Floyd spent most of his life, Floyd was lying in an open gold-colored casket, dressed in a brown suit.

Mourners, many wearing masks and T-shirts with the words "I Can't Breathe," stood 6 feet apart as they paused briefly to view the casket. Some made the sign of the cross as they passed by. On the stage behind the casket were two identical murals of Floyd wearing a black cap that read "Houston" and angel wings drawn behind him.

Floyd's funeral and burial will be Tuesday.

"We're anticipating close to 10,000 and that's what we're preparing for," La'Torria Lemon, spokeswoman for the funeral home told CNN.

On Saturday, hundreds of people lined up for a public viewing of Floyd's casket in Raeford, North Carolina, about 32km from where he was born.

READ:  “Now Is Not The Time To Talk About Building A Quarantine Facility”

Floyd's funeral will then be held on Tuesday, followed by burial at the Houston Memorial Gardens cemetery in suburban Pearland, where he will be laid to rest next to his mother, Larcenia Floyd. 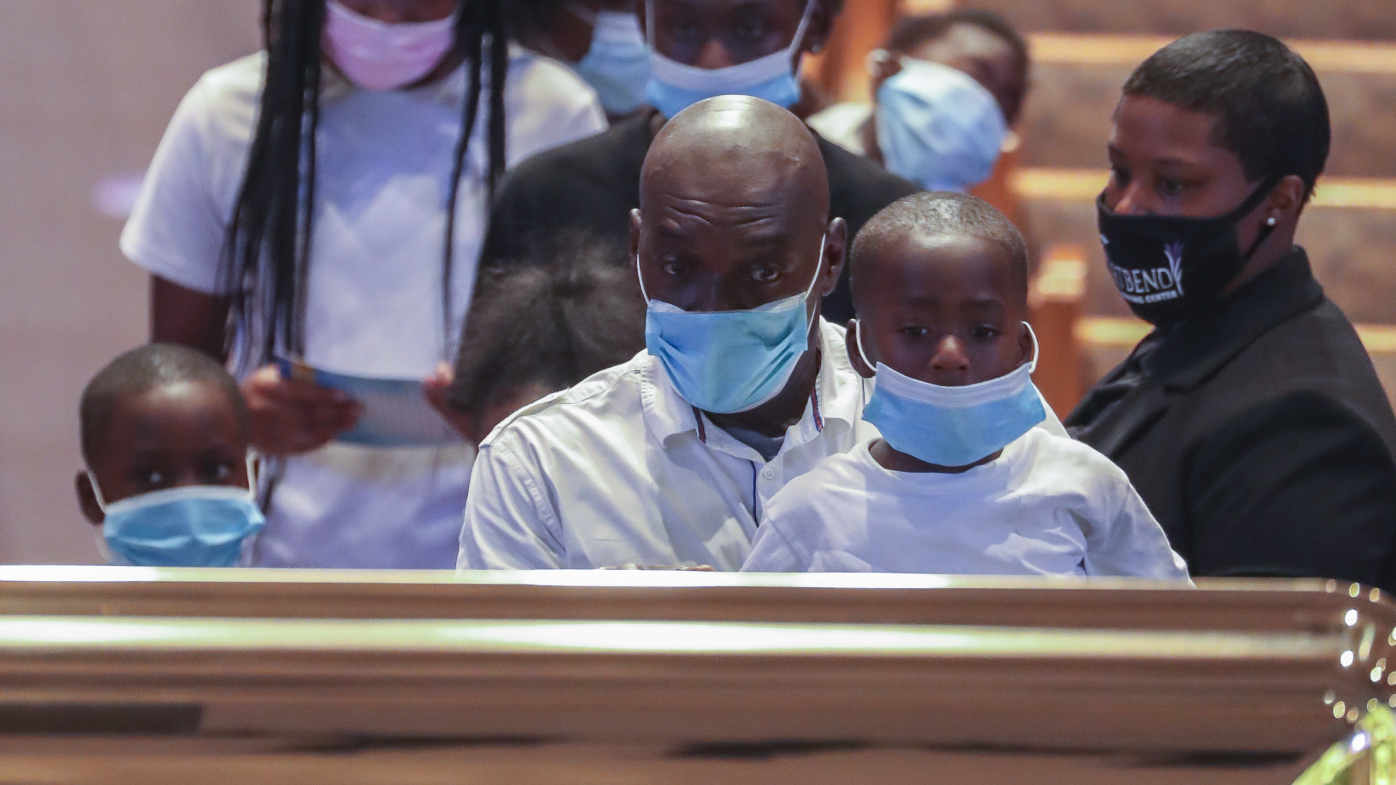 "#GeorgeFloyd and his family are safely in Houston," he tweeted on Sunday.

"It was a big deal for our city to bring him back home," Acevedo said.

Floyd died May 25 after a white Minneapolis police officer pressed his knee into his neck for several minutes even after he stopped responding.

His death has inspired international protests and drawn new attention to the treatment of African Americans by police and the criminal justice system. 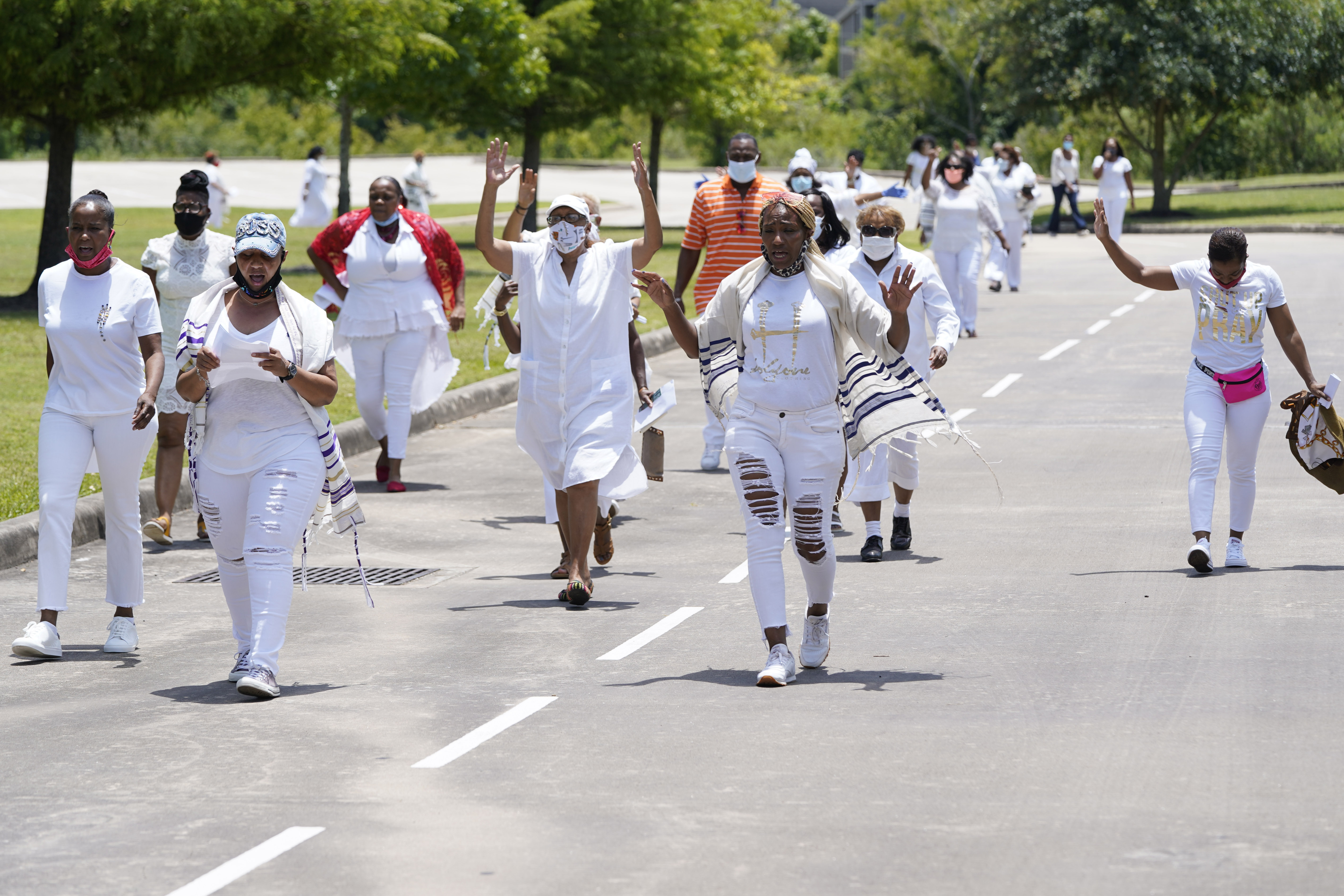 Former Vice President Joe Biden plans to travel to Houston to meet with Floyd's family and will provide a video message for Floyd's funeral service.

A Biden aide on Sunday described the plans of the Democratic presidential candidate. They did not include attending the service.

Biden expects to give the family his condolences, said the aide, who discussed Biden's plans on condition of anonymity. 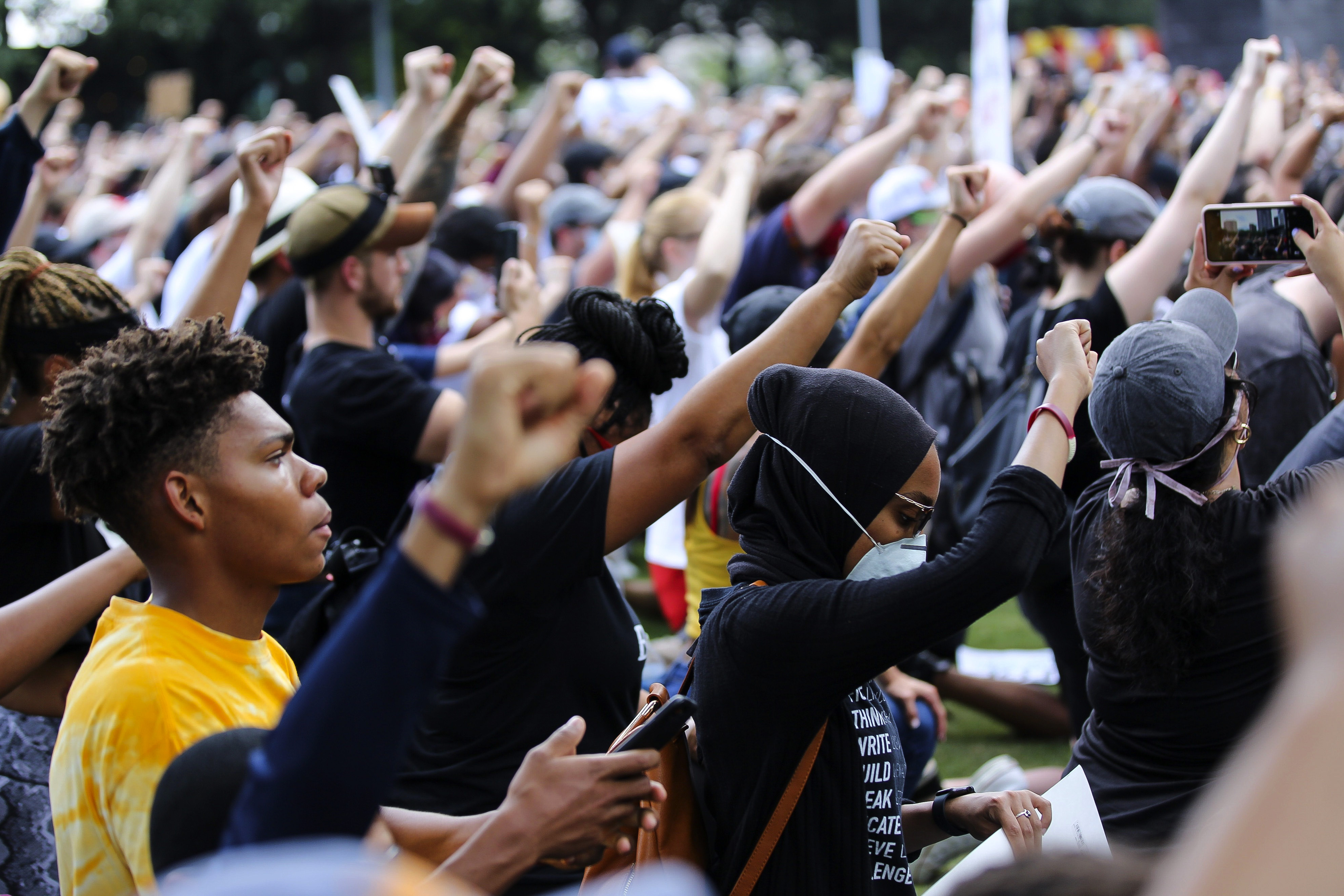 Houston Mayor Sylvester Turner and actor Jamie Foxx are also among those expected to attend, Lemon said, adding that an outline of the service will be available Monday evening.

Previous memorials have taken place in Minneapolis and Raeford, North Carolina, near where Floyd was born.

At the Minneapolis tribute on Thursday, those in attendance stood in silence for eight minutes and 46 seconds - the length of time prosecutors say Floyd was pinned to the ground under the officer's knee before he died. Floyd was raised in Houston's Third Ward and was a well-known former high school football player who rapped with local legend DJ Screw.

He moved to Minneapolis several years ago to seek work and a fresh start. His face now appears on a mural in his old neighbourhood, and his name was chanted by tens of thousands last week at a protest and march in downtown Houston.