Images of the US Air Force’s advanced  B-21 stealth bomber – designed to penetrate the world’s toughest air defences – have been released.

Images of the US Air Force's advanced  B-21 Raider stealth bomber – designed to penetrate the world's toughest air defences - have been released.

The artistic impressions, published by defence contractor Northrop Grumman and the US Air Force, show the plane inserted into the hangars on three air bases.

The B-21 Raider is the first new US bomber since 1988 when the B-2A Spirit was launched, reports Popular Mechanics.

It will be able equipped with either nuclear or conventional armaments.

"We are designing the B-21 Raider to replace our ageing bombers as a long-range, highly-survivable aircraft capable of carrying mixed conventional and nuclear payloads, to strike any target worldwide," General David L. Goldfein, chief of staff of the US Air Force, said.

With a range of 19,000km without needing to refuel, the US will be able to launch the B-21 from its mainland and target anywhere in the world.

Northrop Grumman have given it a "flying wing" design – a tailless fixed-wing structure with no definite fuselage, or main body.

The futuristic design is considered best for evading enemy radar from all directions. 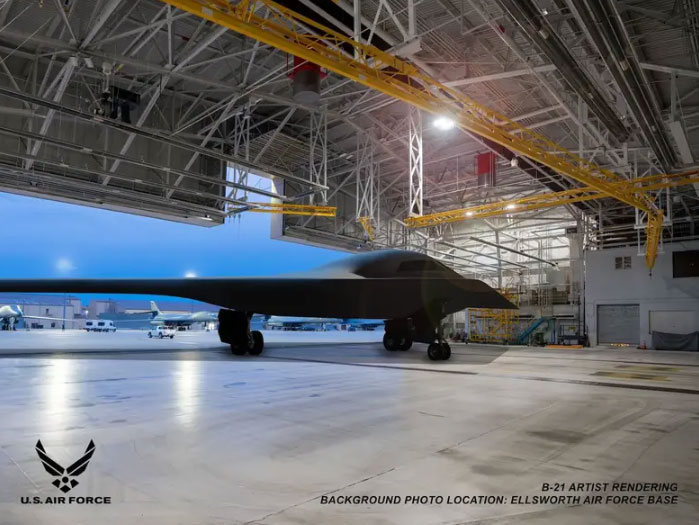 The warplanes are expected to enter service within five years.

They will eventually replace the existing US bomber fleet which includes the B1-B Lancer and B2 Spirit aircraft.