Protesters in Beirut have been doused in tear gas after marching outside parliament to express their anger over the deadly chemical blast that killed at least 135 people.

Protesters in Beirut have been doused in tear gas after marching outside parliament to express their anger over the deadly chemical blast that killed at least 135 people on Tuesday.

Residents of the capital vented their fury at Lebanon's Justice Minister, Mary-Claude Najem, heckling her to resign and throwing water bottles at her as she attempted to tour the damaged streets shortly after a visit by French President Emmanuel Macron yesterday.

According to local media, the people blame parliamentary leaders for the deadly explosion that ravaged the capital. 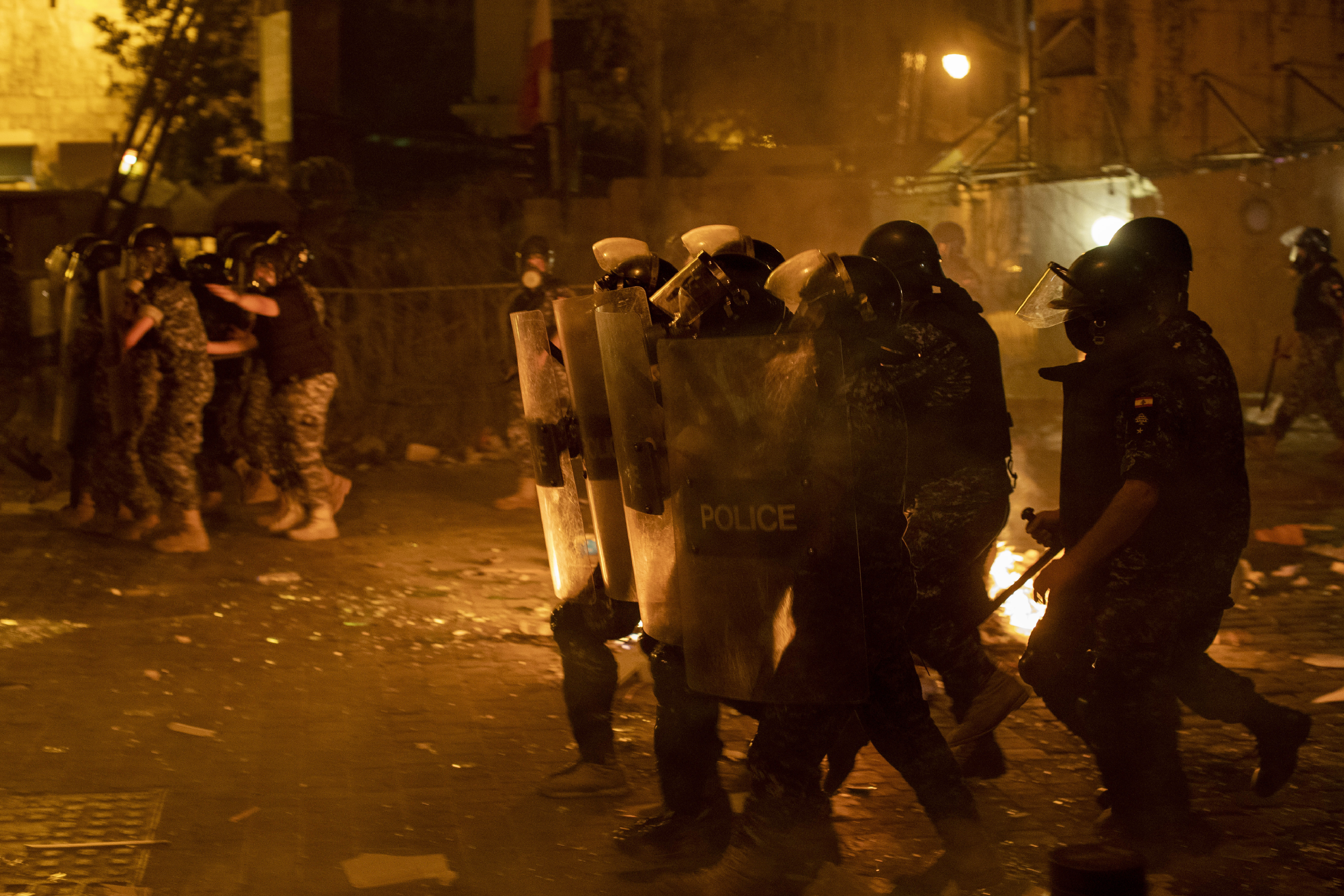 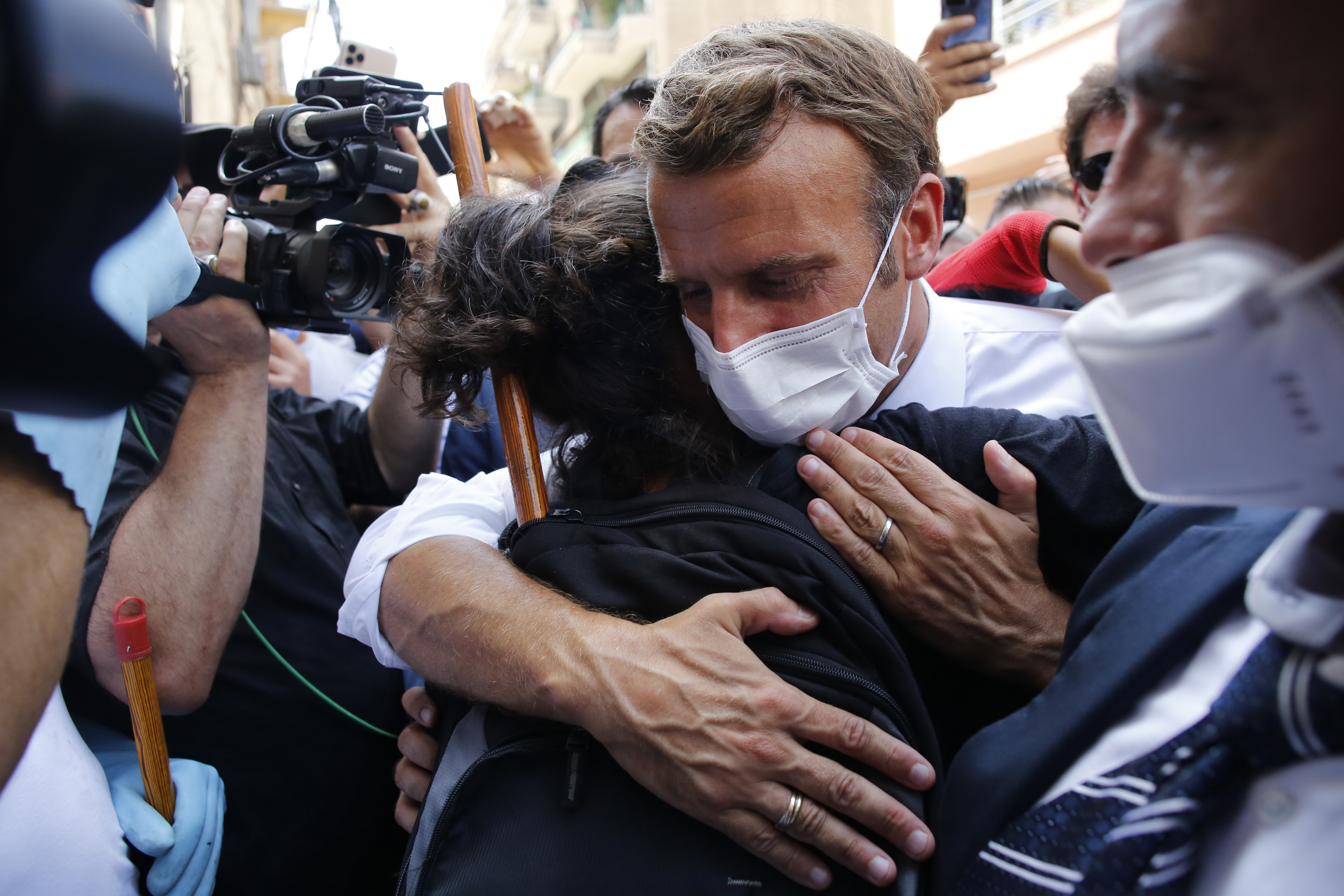 Shouting, "Revolution!" they crowded around Mr Macron, who promised to press the politicians for reform.

A military judge leading the investigation into Tuesday's blast said 16 employees of Beirut's port, where the explosion took place, had been detained. He said 18 had been questioned, including port and customs officials, according to the state news agency.

But while investigators focus on port officials, many Lebanese put the blame squarely on the political elite and the corruption and mismanagement that even before the disaster had pushed the country to the brink of economic collapse.

The Cabinet was previously warned by a security agency that a stockpile of explosive chemicals stored at the port was dangerous, Lebanon's customs chief told the Associated Press — a report that could raise questions of high-level neglect.

That stockpile of 2750 tons of ammonium nitrate set off the massive blast, apparently when touched off by a fire at the port. The chemical had been left sitting in a warehouse ever since it was confiscated from an impounded cargo ship in 2013. 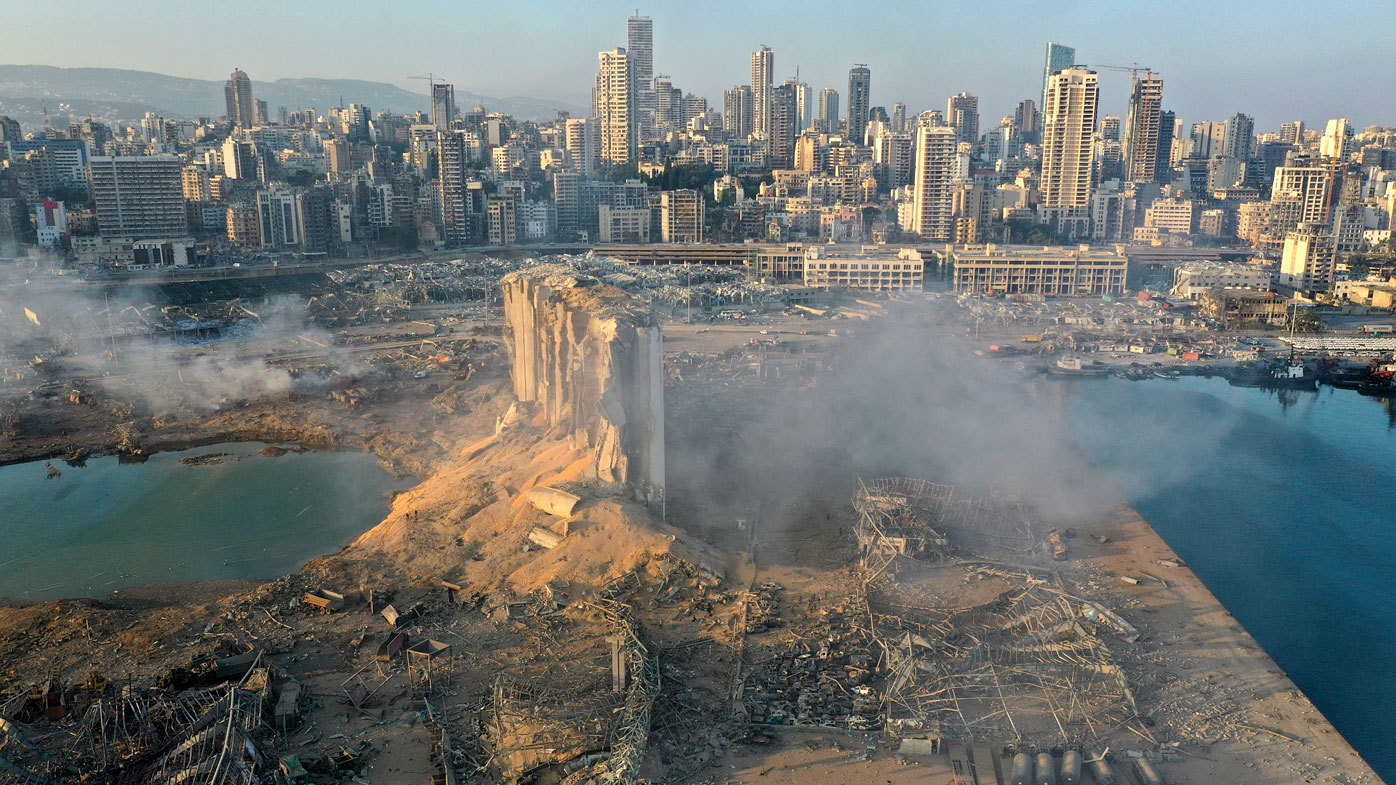 The explosion, powerful enough to be felt in Cyprus across the Eastern Mediterranean, killed more than 130 people, wounded thousands and blasted buildings for kilometres around. Two days later, some 300,000 people — more than 12 per cent of Beirut's population — can't return to their homes, officials estimate. Damaged hospitals are still struggling to deal with the wounded. Dozens are still missing. Officials have estimated losses at US$10 billion to US$15 billion.

Furthermore, the disaster struck at a time when people's savings have melted away, and unemployment and poverty have mounted in the financial crisis. Few have capacity to rebuild homes and businesses, and the government is scraping for dollars.

After talks with Lebanese leaders, France's President Macron announced his country will organise a conference in the next few days with European, American, Middle Eastern and other donors to raise money for food, medicine, housing and other urgent aid.

But he warned Lebanon's political elite that he wouldn't give "blank checks to a system that no longer has the trust of its people." He called on them to create a "new political order." 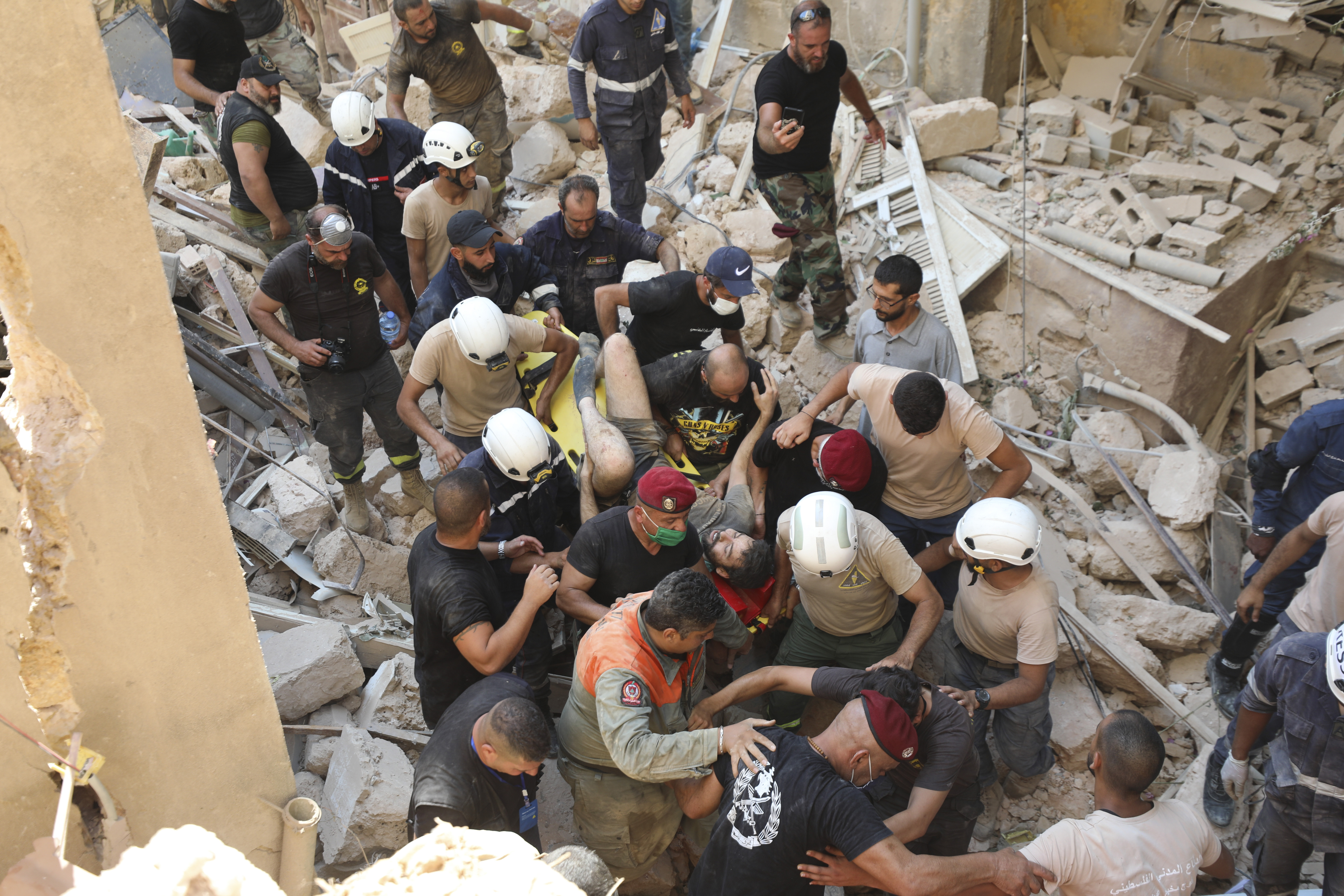 He promised a "clear and transparent governance" so that the aid goes directly to the population and aid groups.

In startling scenes, Mr Macron — whose country once was Lebanon's colonial ruler — presented himself as a champion for the Lebanese to push change on their leadership.

After visiting the devastated port, Mr Macron walked through one of the worst-hit neighbourhoods, Gemmayzeh, down a street lined with wrecked buildings.

On the narrow street, a crowd gathered around him and shouted their anger, chanting, "Revolution!" and "The people want to bring down the regime!" — slogans used at mass protests last year.

Mr Macron told them he would propose "a new political pact" when he met the government later. Then, he added: "I will be back on the first of September and if they can't do it, I will keep my responsibility toward you." He also promised that French aid would be given out with transparency and "will not go into the hands of corruption." 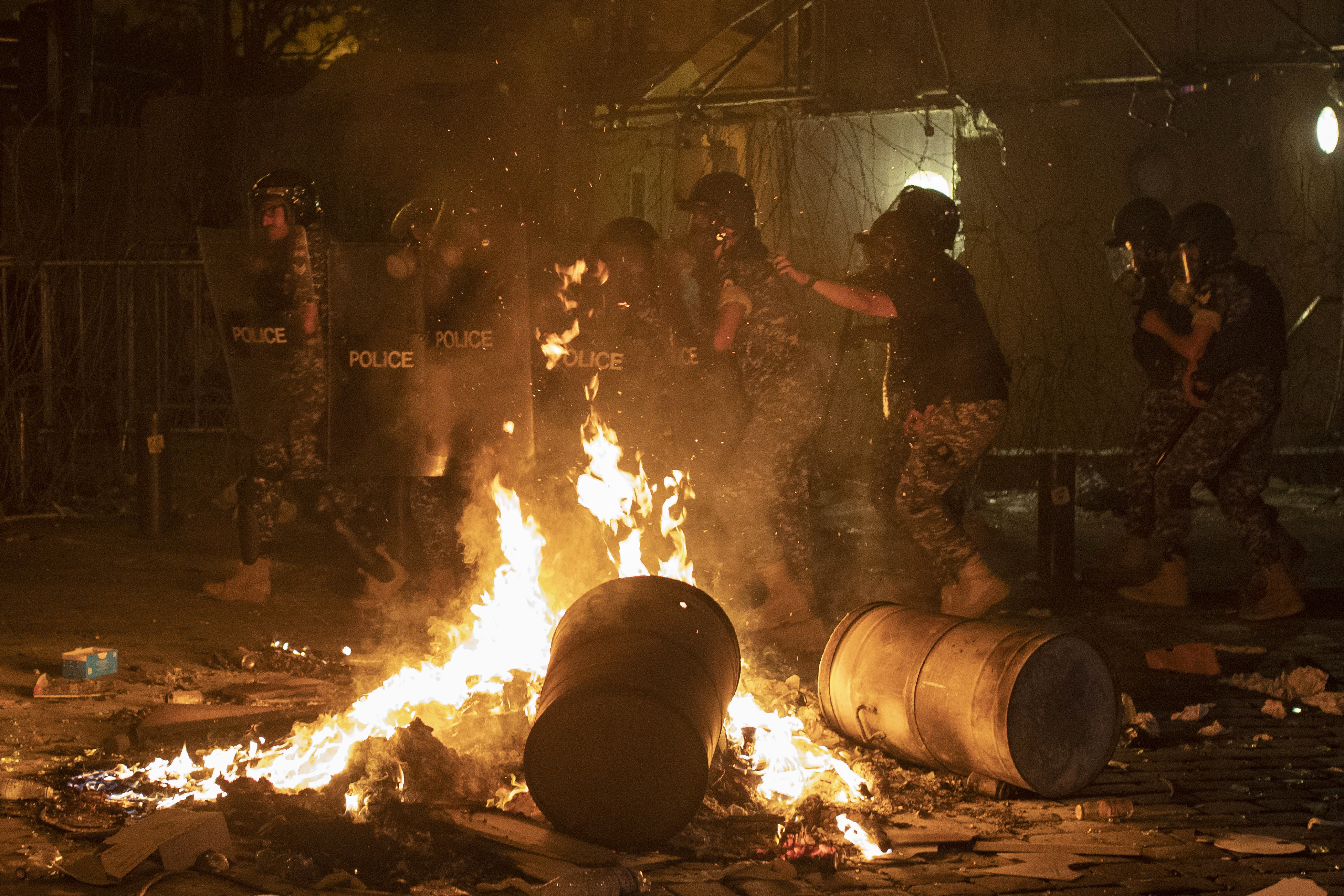 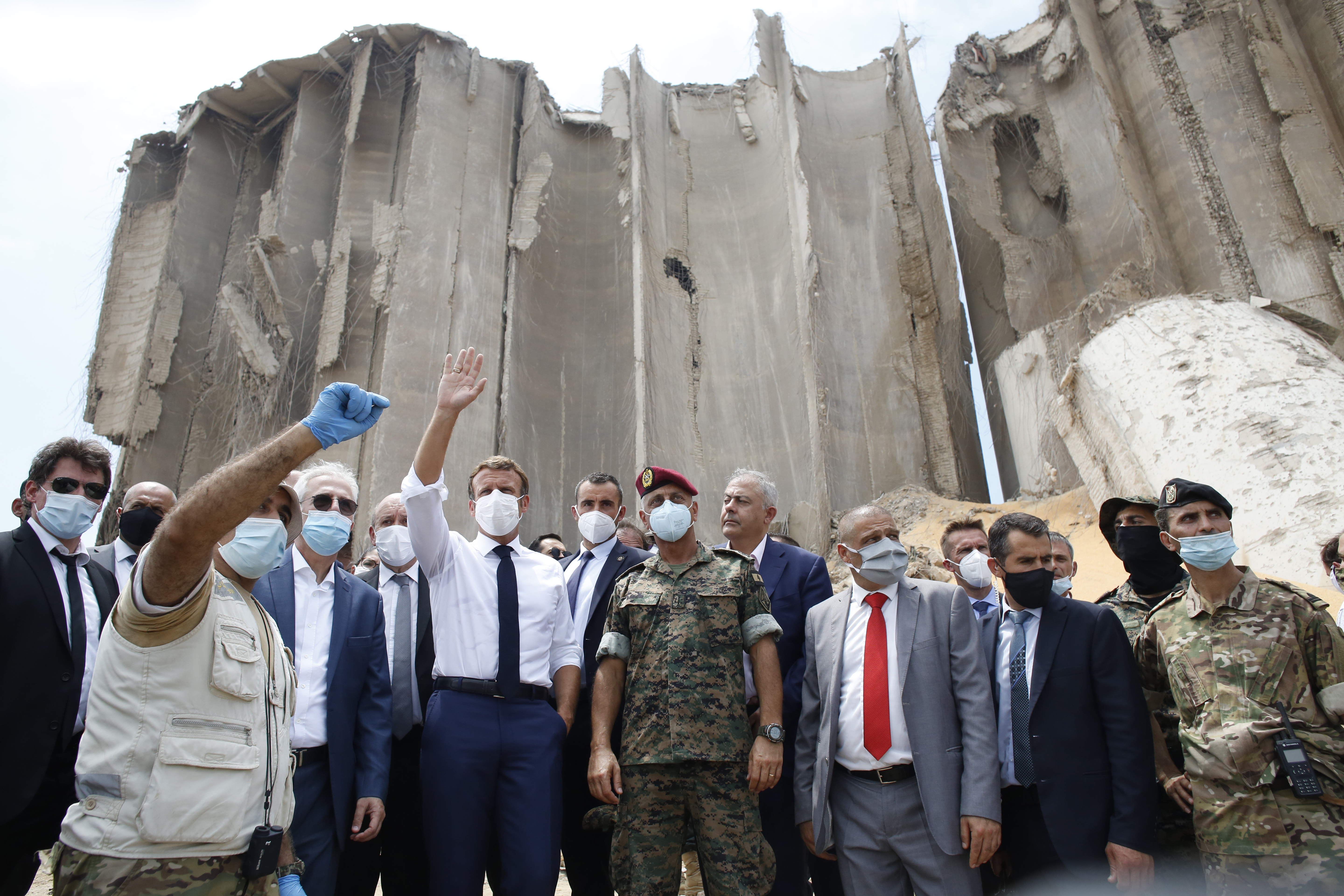 One woman shouted at Mr Macron, "You are sitting with warlords. They have been manipulating us for the past year."

Notably, none of Lebanon's top politicians have toured residential areas damaged by the blast, though President Michel Aoun and others did visit the port. Hours after Mr Macron left Gemmayzeh, Justice Minister Marie-Claude Najm tried to visit, only to be driven out by protesters.

"Resign, you criminal! Would you accept anything less if your sister were among those killed?" one protester shouted at her. As she was about to respond, another sprayed her with a water hose. She left as protesters chanted, "Revolution!" and "Resign." 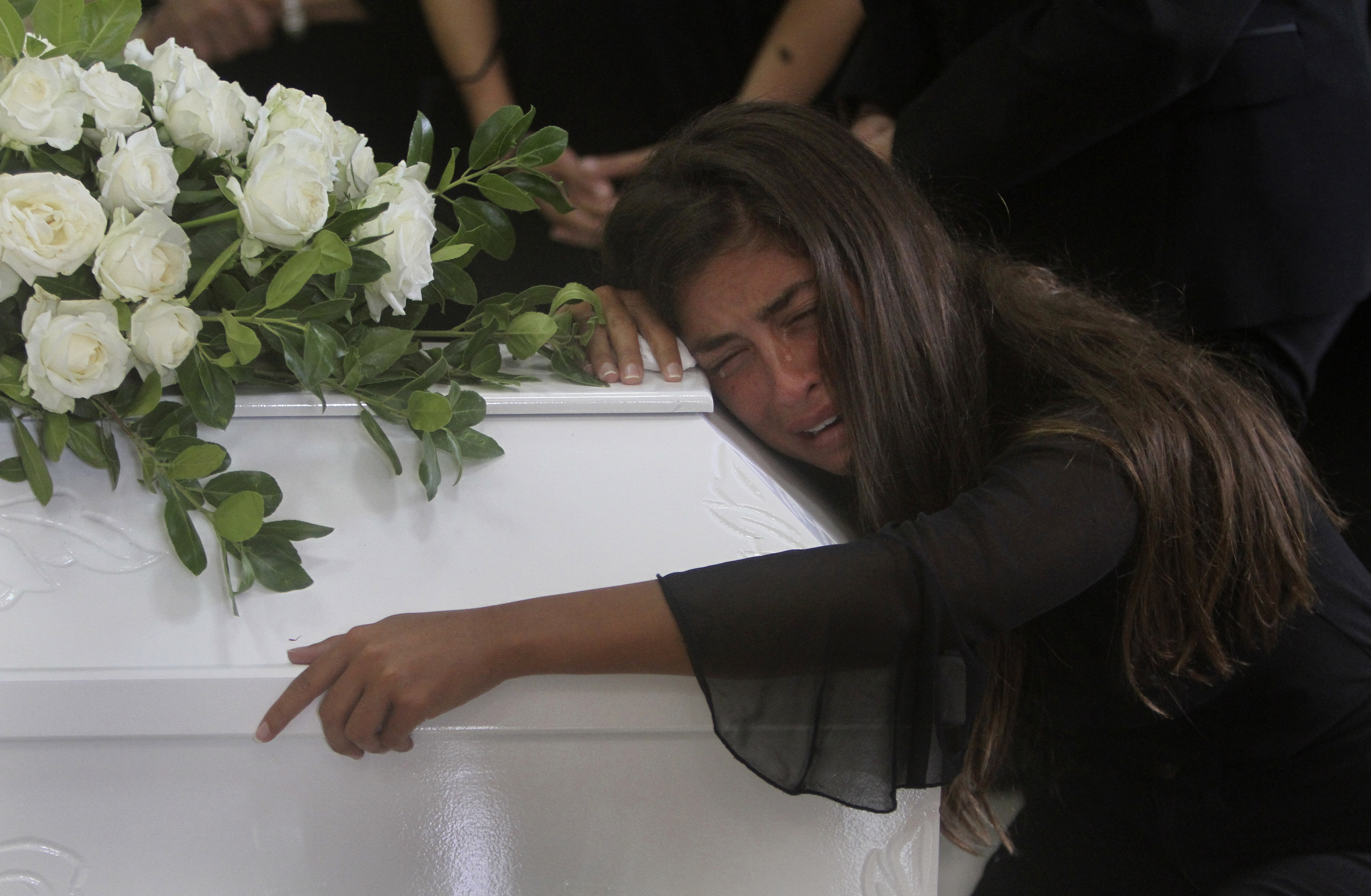 Beirut's hospitals remained overwhelmed by the wounded, and there were fears of a spike in coronavirus cases.

In one hospital, four-month-old Sophie Ajoury, perhaps the smallest survivor of Tuesday's blast, was fighting for her life. She suffered head injuries while breastfeeding from her mother near a window when the shock wave hit.

Her nurse said external bleeding had stopped, and the baby girl was awake and eating, and they were monitoring her condition for internal bleeding.

Emergency aid was starting to come into Lebanon, with European, Arab and Asian countries sending doctors, medical supplies or field hospitals. The United Nations said yesterday it was releasing $9 million from its emergency fund for Lebanon to strengthen hospitals and intensive care units. 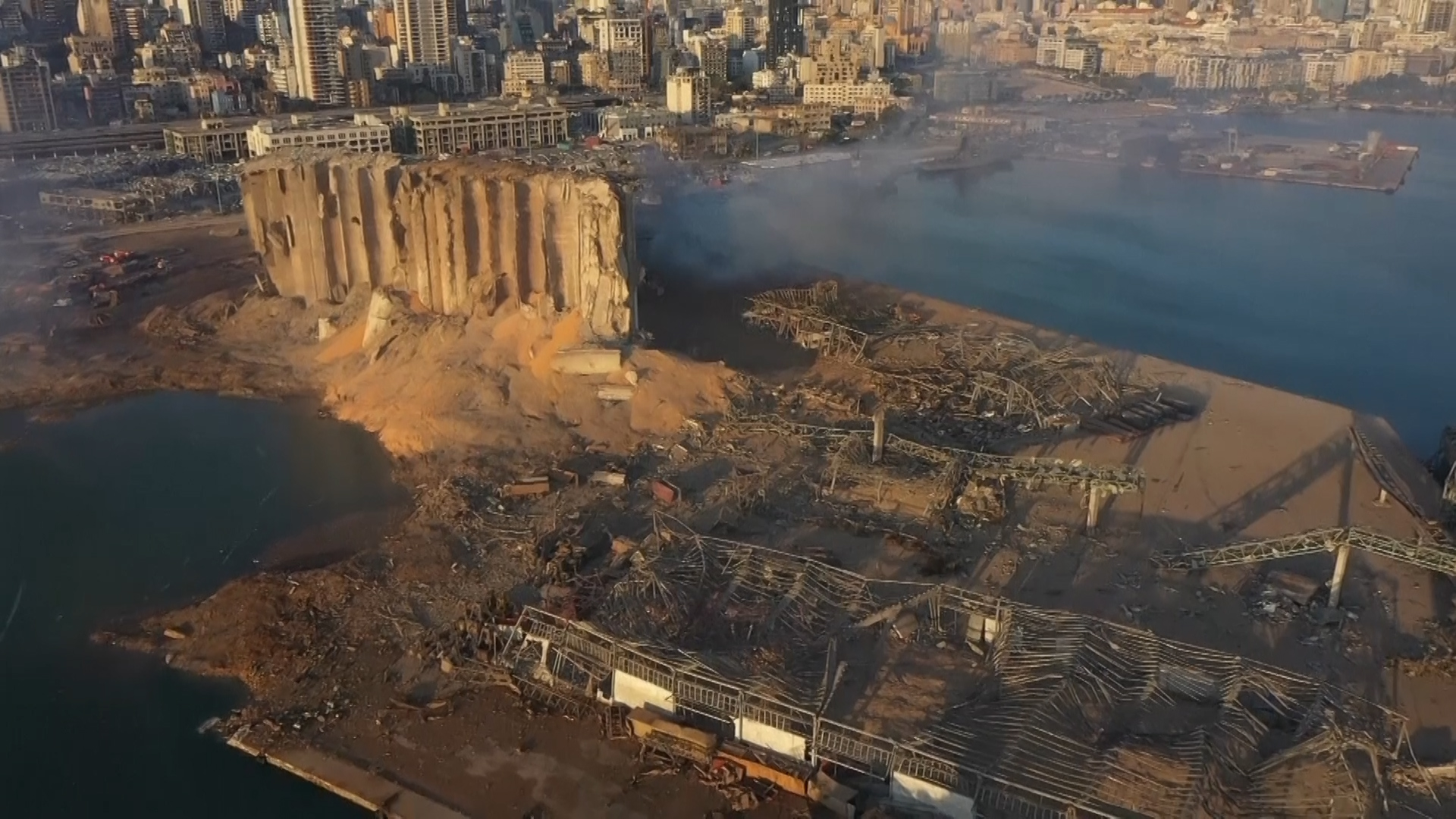 However, the international community has been reluctant in past years to offer support to the notoriously dysfunctional government.

The same factions — and in most cases the same figures — have ruled Lebanon since the 1975-1990 civil war, including Iranian-backed Hezbollah. Almost all public institutions are divided up among the factions, which use them as patronage generators for themselves and their supporters.

That means they tend to turn a blind eye to corruption, petty or major, and little actual development is put into the institutions. Even basic services like electricity and trash collection are a shambles.

For more than a decade, officials, watchdog groups and Lebanon's media have reported on widespread corruption at the Port of Beirut, including bribery and hiding of merchandise from custom duties or taxes. One former finance minister has said corruption at the port cost the state more than US$1 billion a year in revenues. 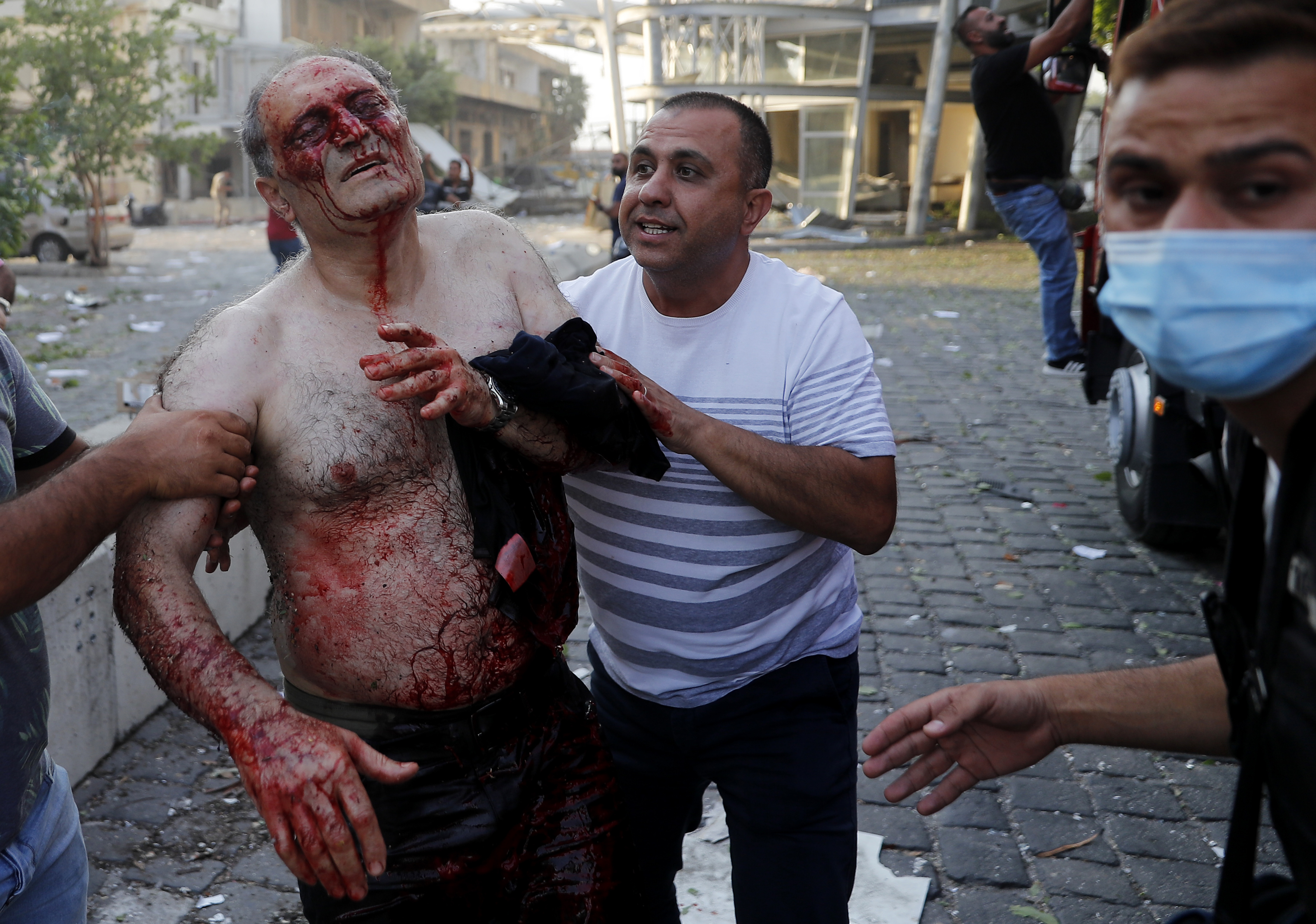 The investigation into the blast is focusing on how the chemical stockpile came to be stored in the port's Warehouse 12 and why it was never dealt with. Authorities have promised to issue results within days, and President Michel Aoun promised whoever was responsible would be punished.

Lead investigator, military judge Fadi Akki, said 16 port employees have been detained and 18 people have been questioned so far, all port and customs officials as well as those in charge of maintenance at the warehouse where the ammonium nitrate was stored.

The investigators will today interview the port's general manager, Hassan Koraytem, and Ghazi Aridi, who was public works and transport minister in 2013, when the ship was impounded, a person familiar with the investigation said.

The Central Bank also froze the bank accounts of several figures, including Mr Koraytem and the head of the customs department, Badri Daher. 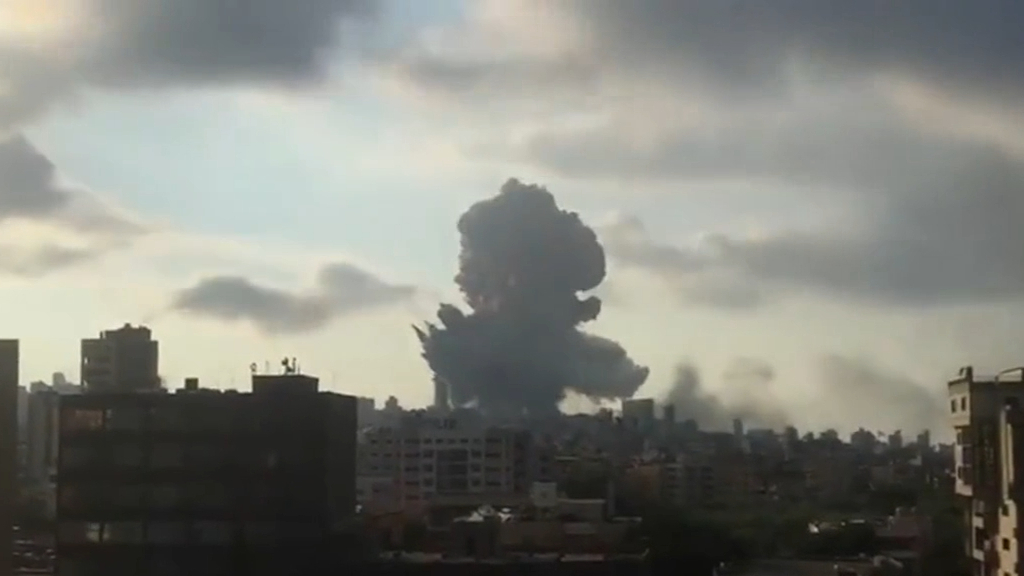 Mr Daher told the AP that State Security, one of Lebanon's main security agencies, had been investigating the stockpile over the past year. During that investigation, State Security sent reports to the Cabinet, state prosecutor and other state institutions about the danger of the material.

Mr Daher confirmed to the AP that he had sent a letter in 2017 to a judge warning of the danger from the ammonium nitrate and asking for guidance on what to do with the material. He said he and his predecessor sent six letters but never got a response.

"I don't know who they answered but we did not get any answers," he said, adding that it wasn't his job to deal with the stockpile but that he sent the letters out of safety concerns. He said the port is run by an agency known as the Management and Investment of Port of Beirut. Asked if it took any measures, he said, "No, because had they done anything the problem would have had been solved."