The brother of George Floyd has choked back tears after former US officer Derek Chauvin was found guilty of all three charges linked to his death.

The brother of George Floyd has choked back tears after former Minneapolis Police officer Derek Chauvin was found guilty of all three charges in a trial dubbed as an "historic" moment for America.

Chauvin, 45, was convicted on charges of second-degree unintentional murder, third-degree murder and second-degree manslaughter over Floyd's death on May 25, 2020.

He pleaded not guilty and jurors took less than 24 hours to reach their verdict. 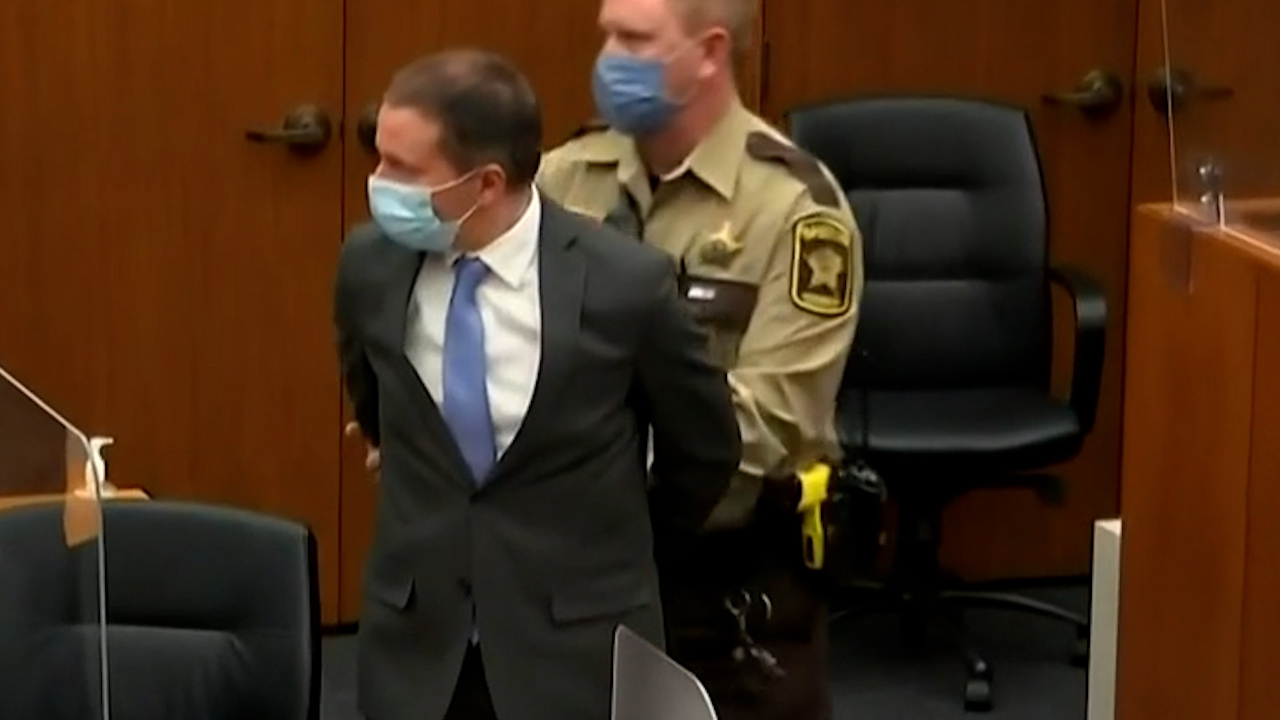 In an emotional statement, younger brother Philonise Floyd responded to the guilty verdict, saying his family could finally "breathe again".

"It was a motion picture, the world had seen his life being extinguished, and I could do nothing but watch, especially in that courtroom over and over and over again as my brother was murdered," he said.

Philonise Floyd was seen clasping his hands over his head in prayer as the verdict was read.

As the third guilty verdict was read, his hands shook back and forth, as he kept his head down and eyes closed.

After court concluded, he was seen crying as he hugged all four prosecutors.

"I was just praying they would find him guilty," he said.

"As an African American, we usually never get justice."

Chauvin was seemingly expressionless, wearing a mask inside the Hennepin County Courthouse in Minneapolis as the guilty verdict was handed down.

Judge Peter Cahill granted the motion to have Chauvin's bail revoked and he was led away from the dock in handcuffs and taken into custody by the Hennepin County Sheriff's Office. 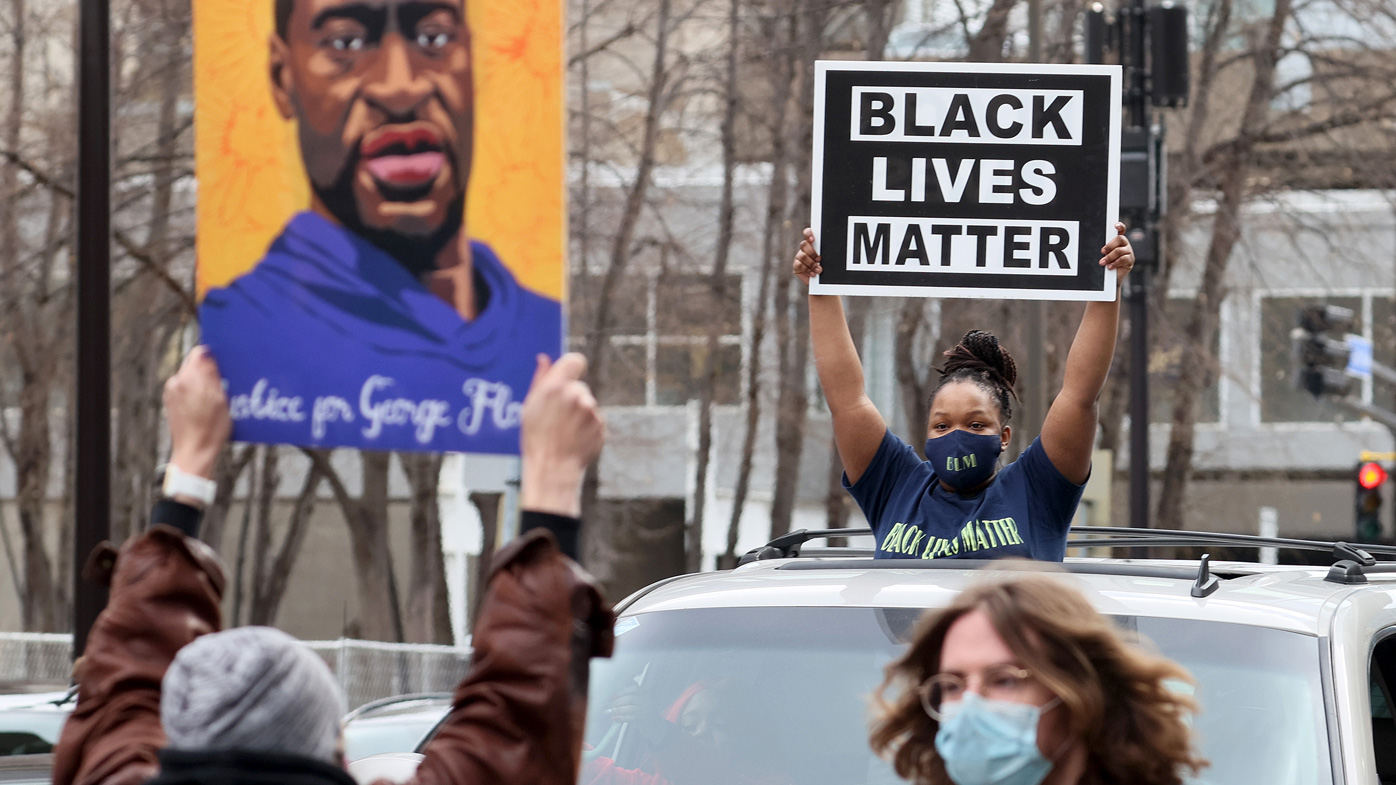 Attorney Ben Crump in a statement described the case as a "turning point" in American history.

"Painfully earned justice has arrived for George Floyd's family and the community here in Minneapolis, but today's verdict goes far beyond this city and has significant implications for the country and even the world," Mr Crump said.

"Justice for Black America is justice for all of America. This case is a turning point in American history for accountability of law enforcement and sends a clear message we hope is heard clearly in every city and every state."

Philonise Floyd said despite the guilty verdict, his work fighting for justice had just begun.

"Reverend Al (Sharpton) always told me, 'we got to keep fighting," he said.

"I'm going to put up a fight every day, because I'm not just fighting for George anymore.

"I'm fighting for everybody around this world." 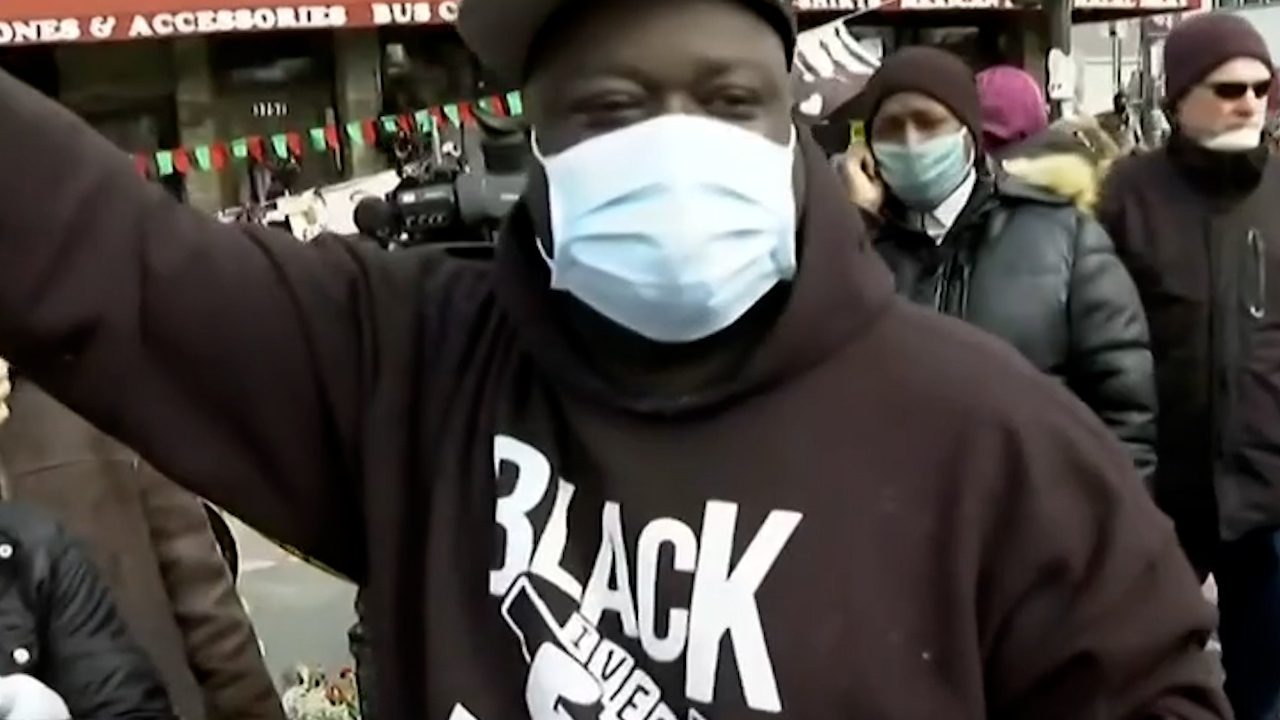 Emotional scenes have since erupted across the US, with people celebrating and cheering as justice prevails for Floyd.

Crowds gathered outside the Minneapolis courtroom and at the location where Floyd was killed, chanting "justice" and "Black Lives Matter" after hearing the verdict at 4.10pm local time today.

9News US correspondent Alison Piotrowski, who was outside the court, told Today people had flooded Minneapolis streets to rejoice over the news. 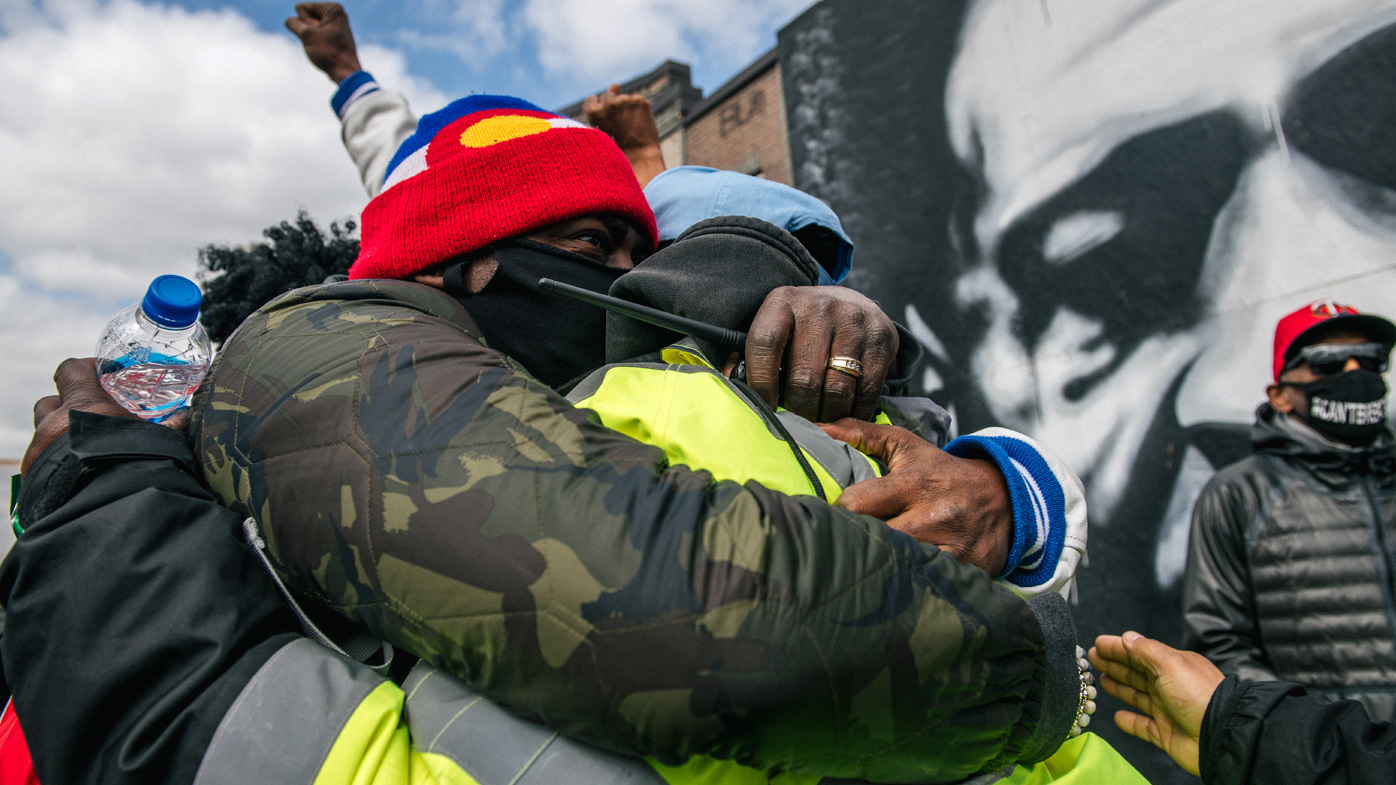 "This is justice for George Floyd's family and also potentially a historic turning point for a country that has been so divided."

Floyd's girlfriend Courteney Ross told reporters outside the courthouse she had not doubted that justice would be served.

"We're finally starting to see. We walked around with eyes wide shut for a long time, so they're starting to open today, and this is going to be the first in a future of change," she said.

"For me, it means that my friends and people that have also lost loved ones now have a chance to get their cases reopened." 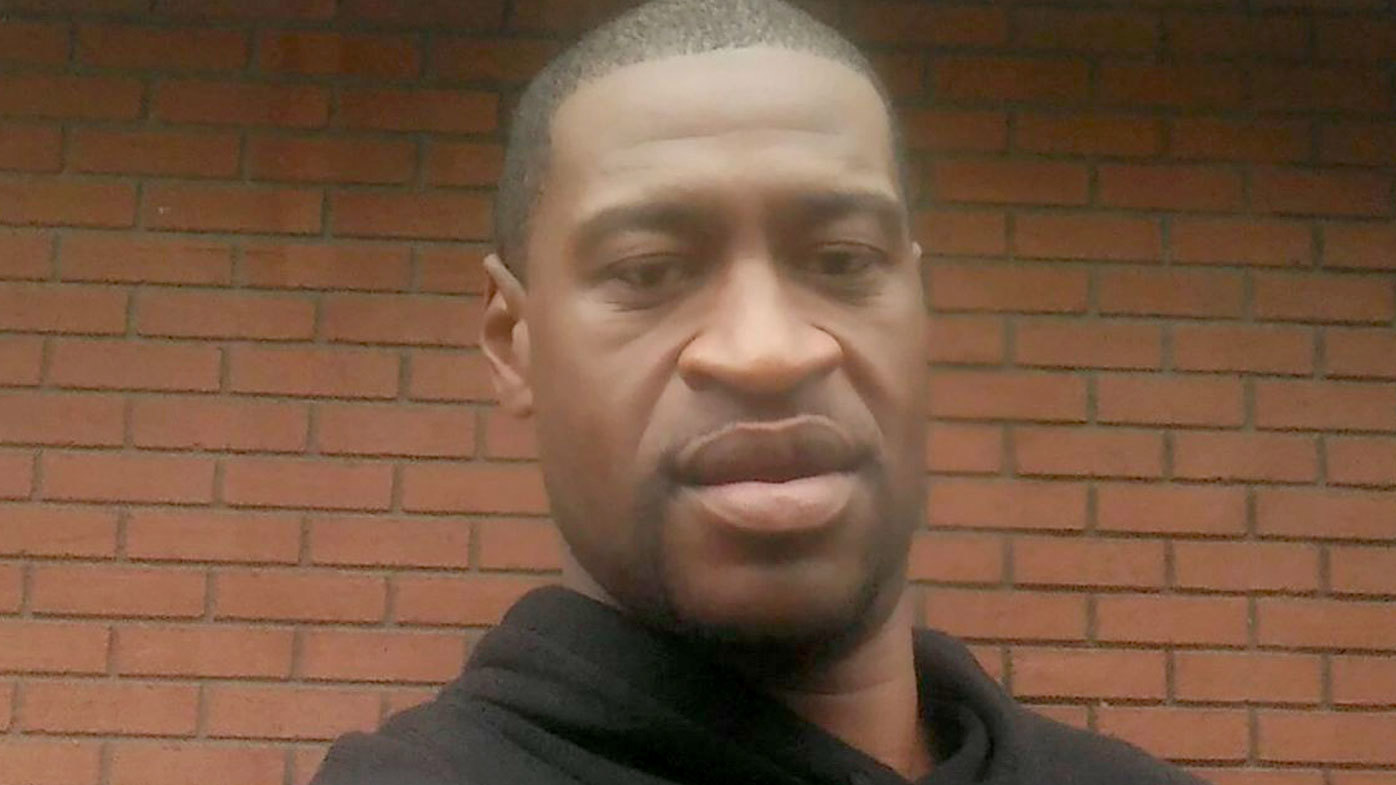 One woman outside the courthouse told 9News she was "overly enthralled" by the verdict for the crime that shocked America and the world.

The guilty verdict means Chauvin could face up to 40 years in prison for second-degree murder, up to 25 years for third-degree murder and up to 10 years for manslaughter.

However, sentencing guidelines recommend about 12.5 years in prison for each murder charge and about four years for the manslaughter charge.

President Biden appeared to be "quite emotional".

"They were still I think just inside the courtroom there, or in the courthouse certainly, and Joe Biden was quite emotional and she was ecstatic," 9News US correspondent Amelia Adams told Today.

"He said: 'I'm so relieved we finally have justice.' He also promised that this would be the start of doing more. He said: 'We're not going to stop until we see change. There will be more action.' So this is the President of the United States promising that today. 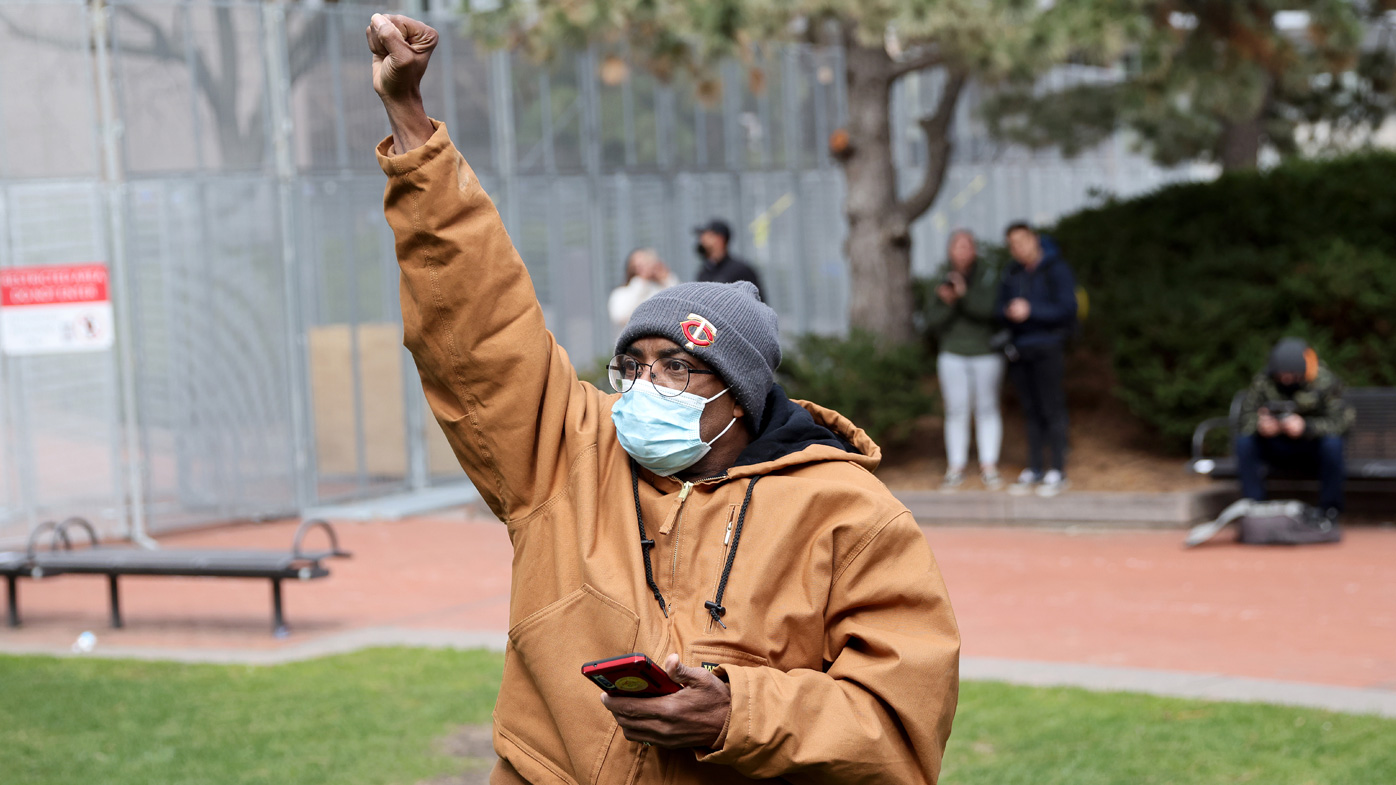 "It is that line in the sand, if you like, that turning point for the way America, the way certainly the American justice system, law enforcement system, treats black people in this country."

Speaking after the verdict was handed down, President Biden said the conviction would be a "giant step forward" for the nation against systemic racism.

"It was a murder in the full light of day and it ripped the blinders off for the whole world to see ... the systemic racism... a stain on our nation's soul, the knee on the neck of justice for Black Americans," Mr Biden said. 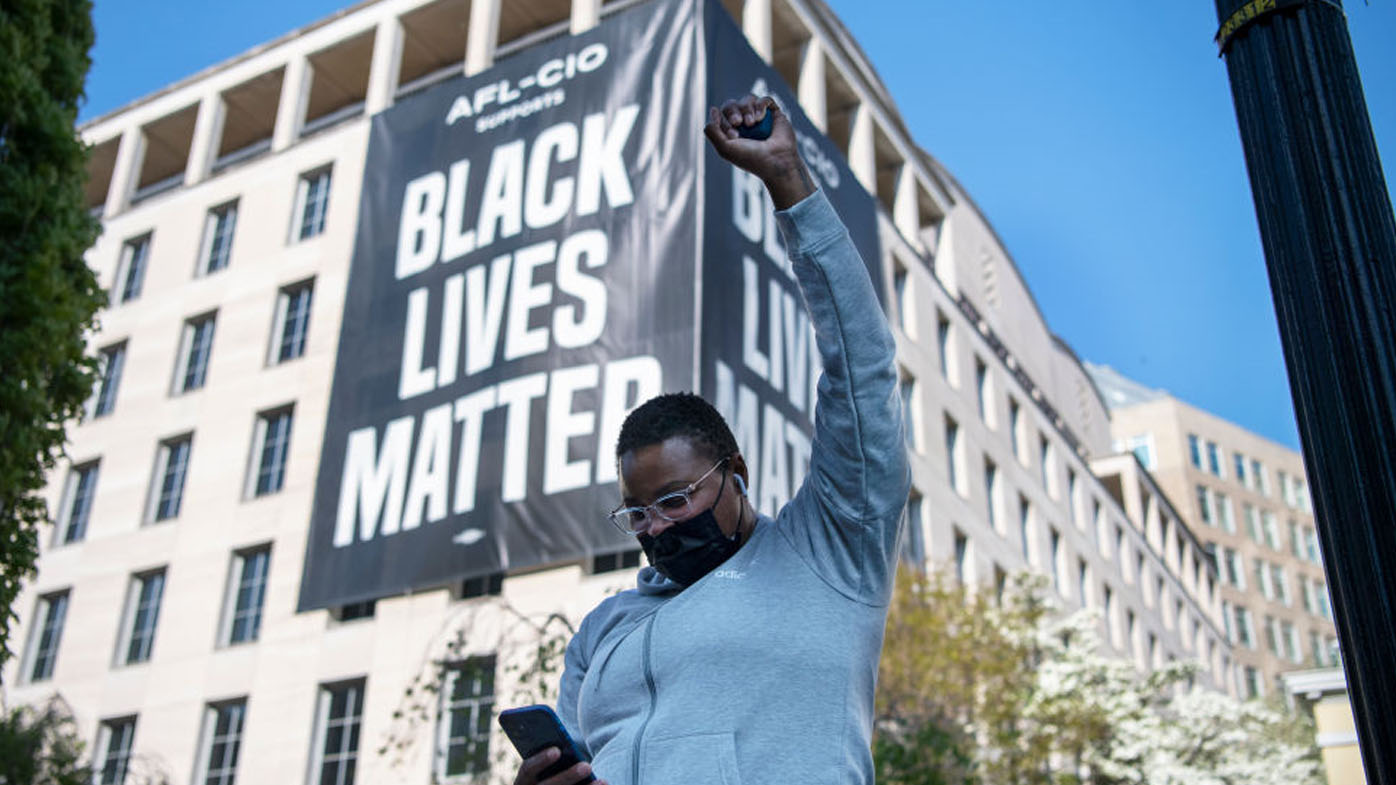 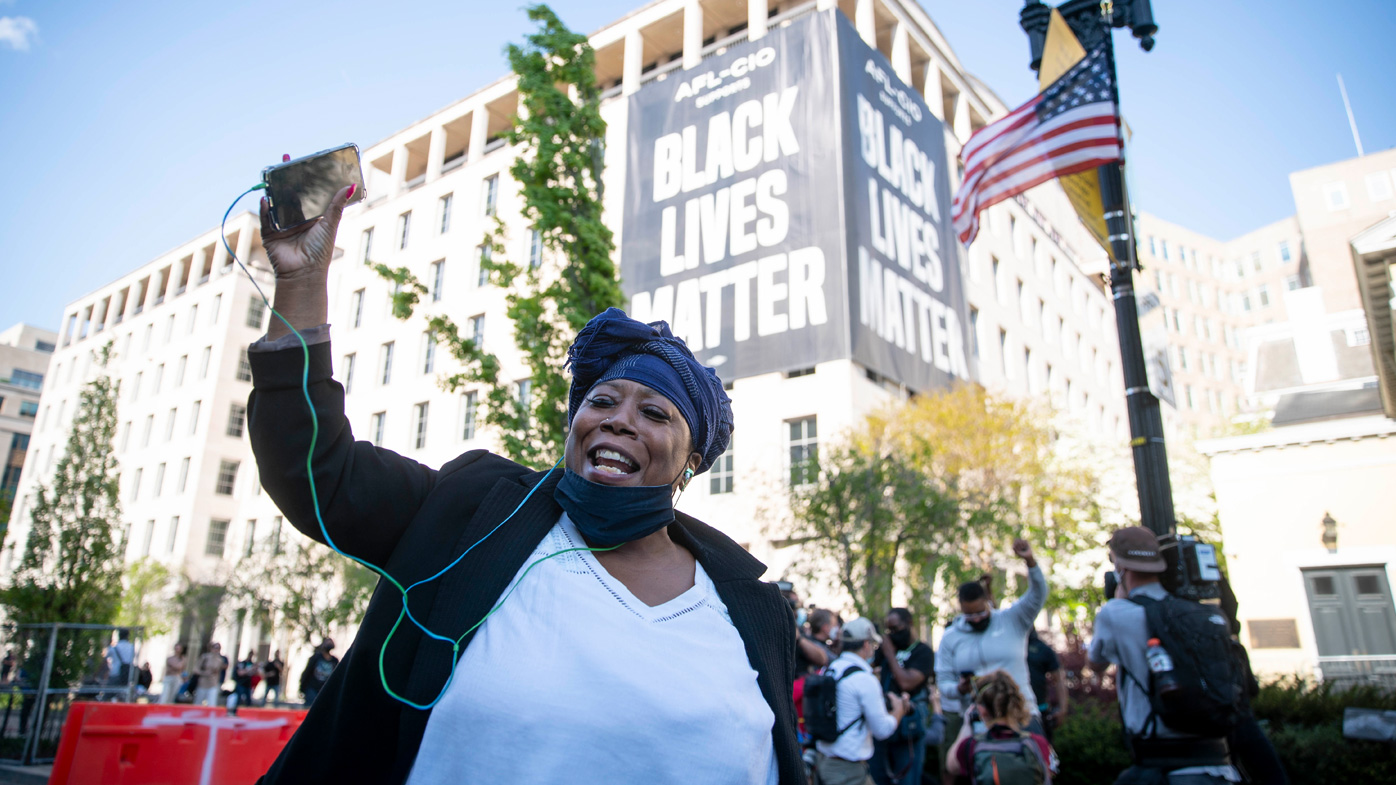 Reporting from Los Angeles, Adams said the verdict was a "historic day" for America and the Black Lives Matter movement.

"It is enormous, a very much historic moment," she said.

"This is really vindication for the BLM movement. It will be seen as a moment of reckoning."

The Black Lives Matter Global Network Foundation (BLMGNF) in a statement said the conviction demonstrated to the world white supremacy would not "win", but the verdict would not bring back Floyd.

"We hope this guilty verdict begins to show that white supremacy will not win. White supremacy has no place in democracy, especially one that is supposed to guarantee us our freedom to live," the statement said.

"But let us also be clear that this still does not bring our loved ones back. We do not get George Floyd back. His daughter and family have to grow up without him. His family continues his legacy through the George Floyd Memorial Foundation."

Civil rights activist Reverend Al Sharpton told reporters the fight for justice for Floyd may have been won, but the battle and war for equality continued.

"This is the first time in the history of this state that a white police officer has been convicted of a murder," he said.

"But the war and the fight is not over. Just two days from now we're going to Daunte Wright in this same county."

Former US President Barack Obama in a statement said today a jury "did the right thing", but echoed sentiments America had a long way to go for justice to be achieved for Black Americans.

"We know that true justice is much more than a single verdict in a single trial," he said.

"While today's verdict may have been a necessary step on the road to progress, it was far from a sufficient one. We cannot rest."

Chauvin was filmed kneeling on Floyd's neck for over nine minutes as two other officers stood by.

Under the officer's knees, the 46-year-old man gasped for air, while repeatedly exclaiming: "I can't breathe" and ultimately went silent. 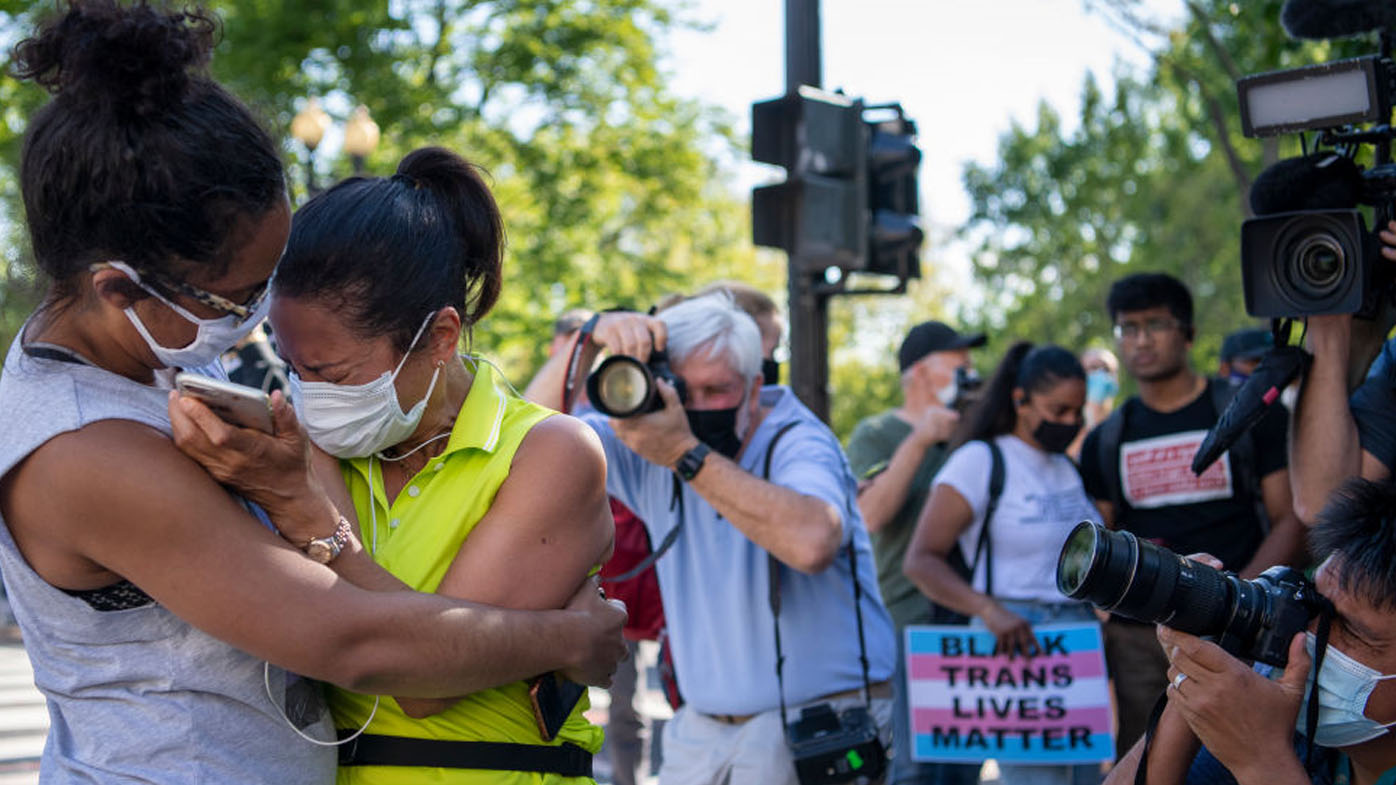 His death sparked months of protests in the US and around the world.

"They stopped and they raised their voices because they knew what they were seeing was wrong," he said.

"They didn't need to be medical professions or experts in the use of force. They knew it was wrong, and they were right. These community members, this bouquet of humanity, did it again in this trial. They performed simple yet profound acts of courage. They told the truth, and they told the whole world the truth about what they saw.

"What happened on that street was wrong. We owe them our gratitude for fulfilling their civic duty and for their courage in telling the truth."