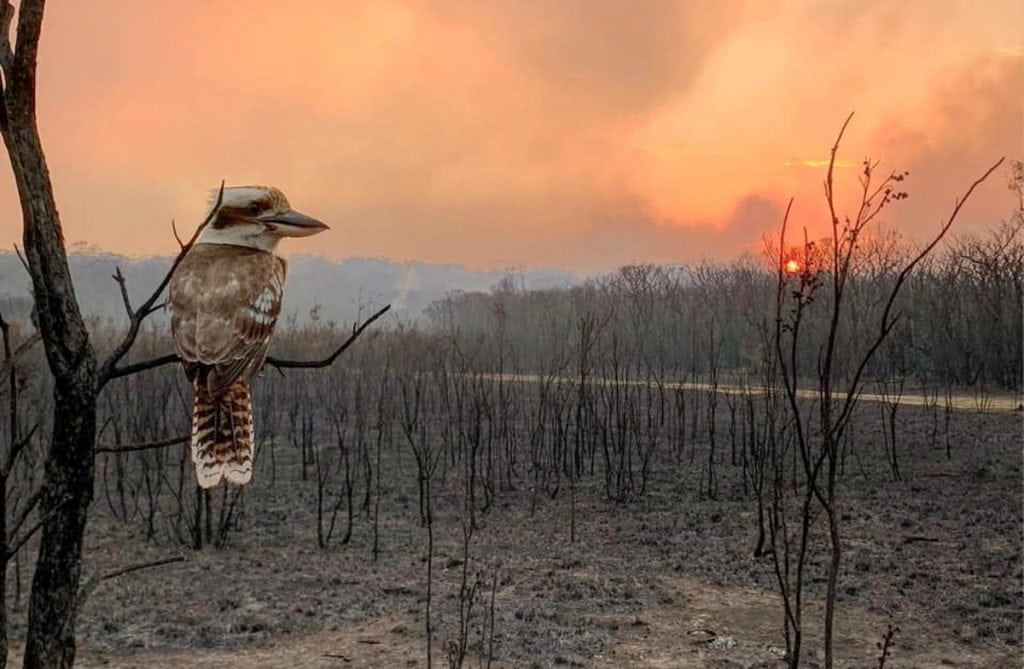 Climate change is aggravating the seasonal burns that Australia has always known. They won’t be snuffed out, but new ecological strategies may help. Bushfires burn in Australia every year. But the 2019-20 season was one of the worst in recorded history, with around 20 million hectares going up in smoke. Many scientists, from climatologists to […]

Climate change is aggravating the seasonal burns that Australia has always known. They won’t be snuffed out, but new ecological strategies may help.

Bushfires burn in Australia every year. But the 2019-20 season was one of the worst in recorded history, with around 20 million hectares going up in smoke. Many scientists, from climatologists to fire ecologists, think that climate change is the main cause of the season’s heightened severity. But they also stress that we need a better understanding of how vegetation, wildlife and people affect where these seasonal fires occur (and vice versa).

Here’s a look at what researchers already know about Australian bushfires — and the lessons this season’s crisis may hold, both for that continent and the rest of the world.

What was burning in Australia, and how unusual was it? 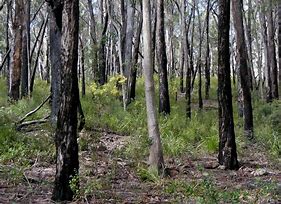 Most of the fires were ignited by lightning and many burned in largely native forests, often in protected areas where there may be some logging but human impacts are limited, says bushfire expert Jane Cawson of the University of Melbourne. “Many are dry eucalypt forests, where wildfire is not unnatural. They can tolerate high-intensity fires burning through every 20 years or so, and tend to regenerate quite well.”

It is no coincidence, then, that most species of eucalyptus (a handful of genera consisting of hundreds of trees and shrubs, mostly native to Australia) are well-adapted to survive or even benefit from fire. Some have evolved features that help a fire to spread and, possibly, enable eucalypt trees to expand their territory in its wake. These include bark that can break off and be carried away on the wind after catching fire. “This way, the trees can create new fires many miles downwind of the main one,” Cawson says.

But if a forest burns too often, even eucalypts can get into trouble, because their capacity to resprout decreases and there is insufficient time for new trees to grow large enough to survive the next blaze.

And this past season, the types of forest fires burning in Australia included other forest types, such as wet eucalypt forests and rainforests, which are more sensitive to fire and take longer to recover.

What is the role of climate in causing this crisis?

A prolonged and severe drought, combined with heatwave conditions that dried the vegetation further, is probably the main reason even wet forests were burning this year, says Cawson, who has studied the flammability of wet-forest vegetation for years. Because of the higher availability of water, these forests tend to produce more biomass than dry forests do. This means that if they do get dry, there is plenty of fuel available to burn, giving rise to fires of uncommon intensity. 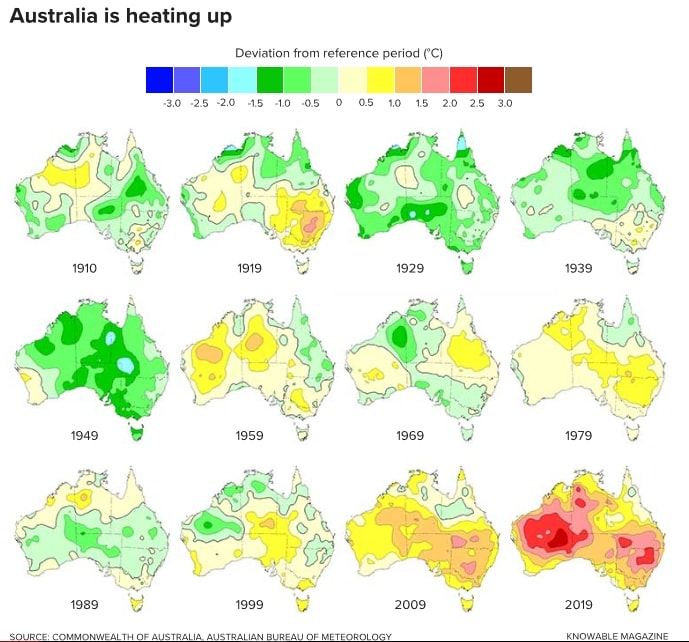 The frequency of record-breaking blazes is alarming fire scientists. Fire geographer David Bowman of the University of Tasmania says that for a long time he was skeptical of climate models — he felt that fire wasn’t properly addressed in them — and he resisted blaming climate change when asked about the extreme fires in Australia in 2009. But now that fires of similar intensity have become so common, he has changed his mind. “It’s just not normal,” he says.

William Bond, a fire ecologist at the University of Cape Town who studies the interaction between fire and herbivores in the African savannas, agrees that the fires are extreme and that severe climate conditions appear to be causing more such events around the world, including in South Africa. “How the hell do we stop them?” he asks. “It’s a deeply puzzling conundrum.”

What can be done to reduce the likelihood of such fires?

The most important action, which will pay off over the long term, is to reduce carbon emissions. This is, of course, a global responsibility, but there is a lot that Australia could do. The nation has one of the highest per capita emission rates of CO₂ in the world, and is one of the world’s largest exporters of coal and liquid gas.

Over the shorter term, better fire management is crucial, Bowman says. In the most extreme weather situations, such as those experienced in parts of Australia this year, wildfires seem able to burn almost everywhere. But in many other cases, what matters most for a fire is the amount of available fuel: mostly dry biomass from plants, either dead or alive. Preventing all fire in an ecosystem that is adapted to frequent burning, he explains, will probably only lead to more intense fires when the accumulated fuel eventually does catch fire, resulting in much greater damage.

Australia’s current approach does not just focus on extinguishing fires, but also includes planned burning to reduce available fuels. Yet there is plenty of room for improvement, Bowman believes, because the fuel management strategies are often disconnected from considerations of how to create or preserve more resilient ecosystems that will better withstand fire in the future.

Better, more effective fire management will require researchers from many backgrounds to work together in an approach called pyrogeography, Bowman and coauthors wrote in a 2013 article in the Annual Review of Environment and Resources. Especially in ecosystems such as the dry eucalypt forests where fire is natural, Bowman argues, managing it will require a full understanding of the many ways it interacts with and is affected by other factors such as weather, wildlife, people and the environment. This approach may not readily point to any one big, simple solution that works for every area, but it could certainly inspire many small ones, he thinks.

Is there an appetite for planned burning in Australia today?

There is, Bowman believes. Among many of the people in Australia (and elsewhere) who are skeptical about the role of climate change in the current crisis, inadequate planned burning is cited as an alternative explanation. Though the rejection of global warming as the main contributor is very likely incorrect, this may boost support for fuel-management approaches that include planned burning in forests. 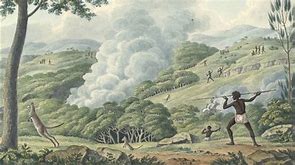 There also is increased interest in the traditional burning practices of Australia’s indigenous peoples, whose ancestors set fire to carefully selected stretches of vegetation for thousands of years, a practice still followed in some parts of northern Australia. Bowman has spent months in the field studying the impacts of indigenous burning in the savanna there, finding, for example, that the practice may not just benefit kangaroos, which enjoy the tender young plants that sprout up after a burn, but also the fire-sensitive indigenous northern cypress pine. He believes that indigenous traditions could inform and inspire better burning practices in the future.

Cawson agrees that this might work in the dry forests. “I suspect that in the dry eucalypt forest, which has been impacted a lot by these fires, there was a lot of indigenous burning in the past,” she says. Other experts have identified specific plant patterns that seem to be the byproduct of centuries of planned burns. In the wetter forests, there isn’t the same evidence, and Cawson doesn’t recommend burns there. There always seems to be a lot of fuel in such forests, she adds, whether or not a fire has recently occurred. And fires open up the canopy, which can dry out the understory — making forests even more prone to fires.

The focus of fire management, Bowman and Cawson stress, should shift from simply maximizing the areas burned (the practice today in Australia sometimes even involves the distribution of flammable substances from helicopters) to a more careful consideration of how and where it would be best to burn. The goal should be not just to reduce fuel loads as much and as quickly as possible, but also to create a more diverse vegetation that could safeguard ecosystems and benefit biodiversity.

Perhaps fire will benefit some plants, but not those poor animals, right?

The high-intensity fires seen raging this season were indeed bad news for many animals, though some experts are skeptical about the high estimates of numbers of animals killed by the flames.

Like many plants, most Australian animals living in fire-prone areas have probably evolved strategies such as burrowing that help them to survive fires, at least if their remaining habitats are large or well-connected enough. Research also shows that when there are regular small fires instead of an occasional big one, the resulting patchwork of lands that burned at different times and with different intensities allows many species to find the kind of habitat they prefer, while stands of unburned, tall trees might offer protection during blazes. 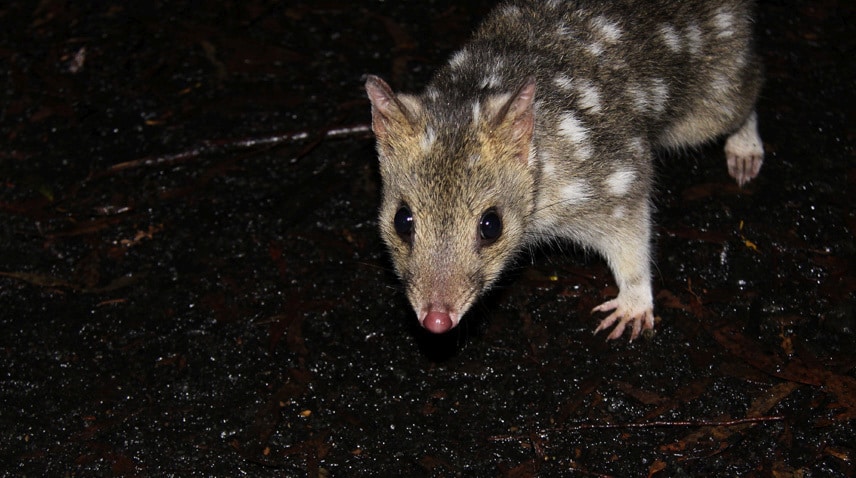 Animals themselves can also help to limit the extent of fires, Bowman says, by consuming vegetation before it dies or dries, or by creating gaps in the flammable plant-material debris covering forest floors. Unfortunately, invasive carnivores such as cats are killing many of those creatures, especially after fires that leave fewer places to hide.

Long ago, the marsupial megafauna that once lived in Australia may have efficiently consumed flammable fuels. But they are now extinct, which may be one of the reasons that fire is common on the continent. Indigenous burning practices may have replaced the role of these herbivores to some extent.

Bowman thinks that nonnative grazers can help as well. “In the past centuries, we’ve introduced camels, buffaloes, pigs, goats, donkeys and six species of deer, so we do have large herbivores now to fill the large gap left by the megafauna,” he says. (He once provocatively suggested introducing elephants in the hopes that they might keep at bay the spread of invasive and flammable gamba grass.) Cawson cautions, though, that introduced grazers can also degrade the vegetation or make it harder for forests to grow back, so they would need to be tightly managed.

What does the situation in Australia foreshadow for the rest of the world?

Since the vegetation in Australia is unique, it is difficult to generalize, Cawson says, “but if we see longer fire seasons in other parts of the world, you’d expect similar situations could happen over there.” This applies especially to the increasing number of eucalypt plantations in other continents, which already contribute to the fire risk today.

Eucalypts grow very fast, which is likely why they’re so popular for forestry, Bond says. “But if you ask me, exporting this remarkable fire-adapted tree all over the world while the climate is changing is insane.” The flammable trees may be particularly risky in regions where wildfire is natural, such as California, the Mediterranean and large parts of Africa that once were covered in grasslands or savanna.

Bond worries about climate change mitigation programs that plant fast-growing trees such as eucalyptus to store carbon, especially in regions where the trees are likely to catch fire sooner or later. “When that happens, all the carbon will be released again, while the ability of the original vegetation to capture and contain carbon and preserve its natural biodiversity might be irreversibly compromised,” he says. Trying to prevent global warming by planting flammable trees everywhere does, indeed, sound like a highly questionable way of fighting fire with fire.

Tim Vernimmen is a freelance journalist based near Antwerp, Belgium. He writes about the science of life.